It’s been a big week for decision taking. The US (probably) isn’t giving Trump four more years (🤞), but the UK has given the Job Retention Scheme four more months. UK politics nerds are horrified by it taking three days plus to count some ballots (while being secretly thrilled at the excuse to keep watching CNN). But we’re not in a great position to talk decisive decision taking wise. Forget the four years faffing on what Brexit means – it took two months and five separate u-turns to get to yesterday’s furlough extension. So let’s just let the yanks get on with it. So long as they get the right result. To keep you entertained in the meanwhile, Chart of the Week has some excellent US election/labour market related trivia to offer.

Happy lockdown to the English amongst you and happy final weekend of lockdown (for now) to our Welsh readers. If those out west need some extra reading for this last weekend inside, we’ve just published a deep dive into the past, present and future of Welsh living standards (launch event with the First Minister here).

And whether you’re on the way in or way out of lockdown, have a great weekend.

Staying in: Staying at home is all the (legally required) rage these days. But a new study of the first four months of social distancing measures in the States reminds us that how much people stay at home really depends on your income. Using smartphone location data the authors show that residents in high-income neighbourhoods stayed at home significantly more. The reason? Not because lower-income people flouted the rules. Far from them always visiting supermarkets or parks, the real driver was just that they were far more likely to have to leave their homes to work. As we head into our second lockdown, this mirrors our findings here in the UK – it’s low earners who have not just been more economically exposed during the crisis, but also face the greatest health risks at work.

Working welfare? This is a techy one – but it’s important. In work tax credits of various kinds have been a key feature of UK and US welfare reforms in recent decades – topping up earnings partly to reduce poverty amongst lower income households but also to increase incentives to work. However a high-profile study published last year challenged the consensus that the US version of this policy (the Earned Income Tax Credit that lifts over five million children out of poverty) did boost employment, suggesting that this effect only occurred when the scheme was extended during the nineties, a time period which also saw a lot of other changes to welfare that influenced employment levels. However, new research pushes back persuasively (tweet summary), showing that the scheme had strong positive impacts on employment levels, even controlling for the effects of other welfare schemes introduced or extended around the same time. This is a really important debate (where we come down on the side of the new paper) as we look ahead to the task of reducing unemployment in the years ahead.

How charitable? Money matters in politics, with billions spent on ads in the US. But in many European countries we have strict limits on campaign spending, aiming to reduce the impact of £s on votes. But in a shock move politicians can find ways around these rules, using public funding for electoral gain. A new study examines the use of grants to non-profits close to election time in France, finding that policy makers are significantly more generous to organisations in areas where incumbent political allies are at risk electorally. This isn’t peanuts – the cash going to such NGOs is much bigger than the average candidate can spend. The bad news for democracy? It works at increasing the vote for incumbents. Obviously this kind of thing would never happen here.

Socially awkward: Since 2017, any organisation that has 250+ employees must publish their gender pay gap (although the requirement’s been suspended mid-pandemic). But what does transparency achieve? Quite a lot. A recent paper compares firms above and below the 250-employee threshold, it finds pay gap reporting increases the likelihood of women working in occupations paid above average by five per cent. While this hasn’t yet translated into women’s pay rising relative to their male co-workers, it has reduced male pay by 2.8 per cent (you might call this the Gary Lineker effect). The cause? The authors find firms recognise the reputational damage of big gender pay gaps and take action (could be down to British social awkwardness as gender gaps become visible, or a more self-interested response to the stock market hits that follow in the aftermath of publishing their results). So it’s not just socialising we need to get back to post-covid – time to get back on with pay gap reporting.

Attitude watch: It probably goes without saying but obviously you should all read that annual compendium from NatCen: British Social Attitudes. It’s stuffed full of important insights on public attitudes to everything from tax/spend and migration to inequality and Brexit.

After any US election we get a million takes on what it can teach us about our own politics/economics. Biden winning/not winning enough shows you need to be centre left/harder left  – or whatever else you already thought. But TOTCs is always looking for some practical lessons to help us solve the big economic challenges of the day – rising unemployment in 2020’s case. Which is where this week’s chart comes in. It uses fascinating new data from the US’s Bureau of Labor Statistics to show how employment in political organisations varies across US election cycles. In years with no national elections, this averages around 7,300 – but it almost doubles to 12,600 in presidential vote years. There’s also huge increases across a presidential election year – in 2016 the October peak saw 22,367 employed. So, with apologies to Brenda from Bristol – maybe doubling down on the UK’s recent election bonanza is part of getting some job creation going. If that isn’t enough to convince you, think of what the sight of the people of Sunderland doing a damn quick job of the counting will do to help restore some national pride. 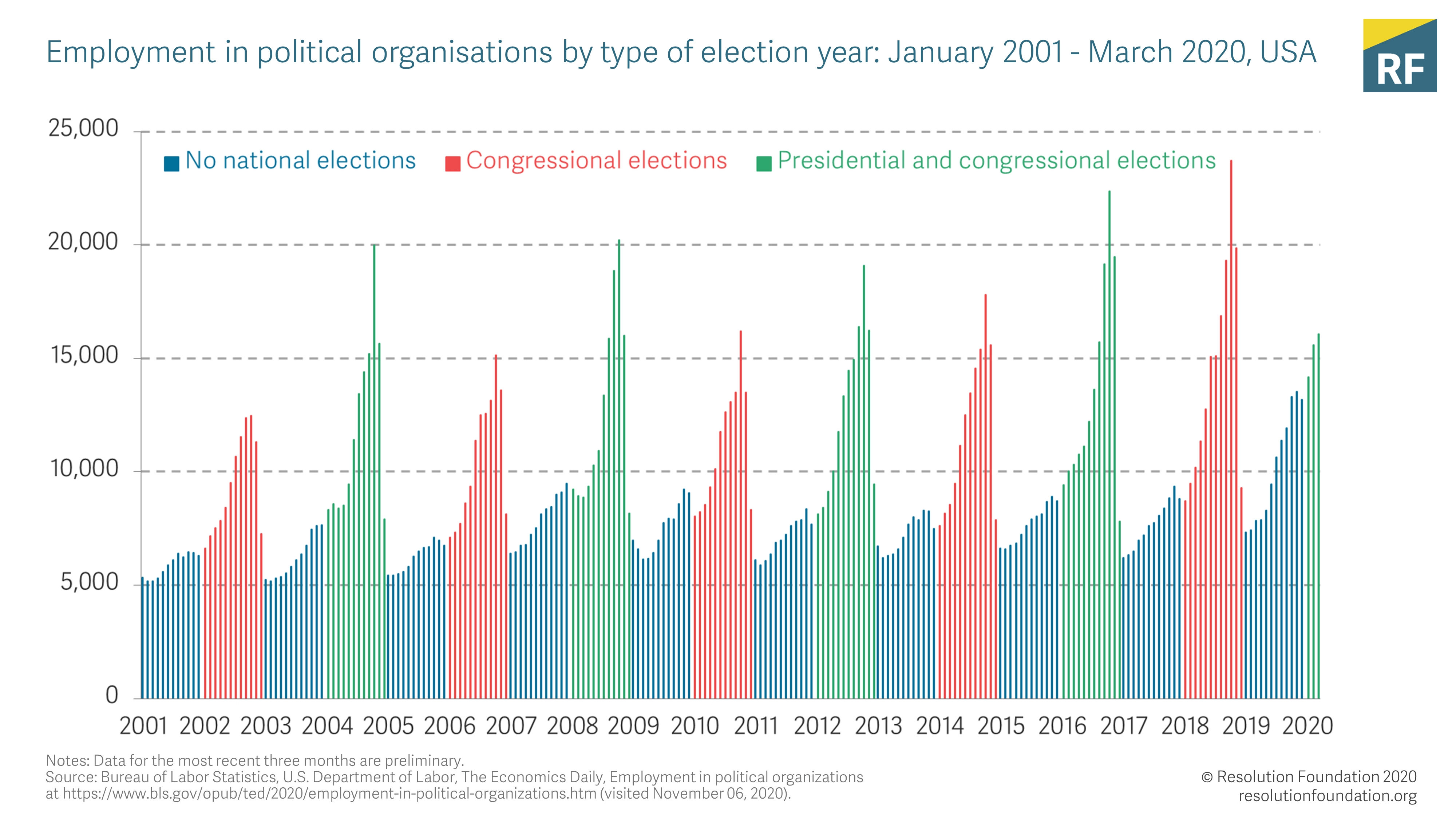