It’s been a bit of a manic week. It was only last Sunday that the PM was ‘piloting’ his way out of isolation in the morning, but locked back down by tea. On Monday night the Government was about to announce an infusion of badly needed cash into social care (a great idea) funded by a National Insurance rise (a rubbish one). On Tuesday, the announcement was off. Oh, and Freedom Day happened so you can go clubbing – the kind of theoretical freedom that means something in a political philosophy seminar but (personally) diddly-squat in real life.

Purely selfishly, I’d just like everything to calm down a bit. We’ve all got holidays/quarantine to be focusing on. But if you’re pinged don’t panic – we’ve got reads galore and a Chart of the Week to explain why libertarian Boris has changed his mind on introducing vaccine passports. Have a great weekend.

Dangerous heat. The heat’s dangerous people. Personally, 30 seconds sun exposure is enough to turn me the colour of a Labour rosette. But more generally heat doesn’t just make workplaces uncomfortable – it makes them more dangerous. Research examining individual injury-related compensation claims in California shows higher temperatures lead to more injuries. And while we all suffer the same heat, the risk of workplace injury is far from equal (spreadsheets may cause the Resolution team mental damage, but physical injury isn’t exactly common). The increased risk of injury due to heat is five times higher for workers in the poorest areas vs those living in the richest areas. There is some good news though in the context of rising global temperatures: the impact of heat on injuries has declined over the past two decades. “Health and safety going mad” isn’t such a bad thing after all.

More working? Some people are worried that the UK recovery is being held back by overly generous support. Apparently furloughed pilots would be in the fields picking fruit if left to their own devices. In the US a related row sees many Republicans arguing that higher Unemployment Insurance (the $300 a week increase known as Pandemic Unemployment Compensation) is stopping people taking jobs. 25 states have scrapped this extra payment as a result. What’s been the impact? In a short and sharp blog economist Arin Dube provides some initial answers: 1) As intended fewer people received benefits 2) There is no evidence that this saw more people taking jobs in the weeks that followed – if anything employment actually fell. 3) There was a rise in the people struggling to pay for normal expenses. So, the policy has been a triumph if the goal was to make people poorer. Not so much if you wanted them to work more.

Hostile politics. “Online discussions about politics turned out to be nasty, brutish and not nearly short enough” is the starting point for research asking why that has turned out to be the case. Specifically, it investigates whether the problem is (as is commonly assumed) that people behave differently online (e.g. because they’re anonymous/can’t see the people they’re talking to). The conclusion is that the evidence doesn’t support this idea (which surprises me at least). The problem instead is that people with some personality traits just appear to be inclined towards political hostility – online or offline. But they are much more visible online, presumably because they don’t get invited back much in real life…

What economists want. Lots of people have views on whether economists work on the right or wrong issues. But what do economists themselves think? 10,000 economists were surveyed for a new paper on the types of economics work being done, and the subject areas being focused on. Inevitably there were lots of different views (except that everyone thought their own specialisms should be more prominent…) but some common ground. Subject area wise, there’s a desire for more economic history. And economists want to see more policy relevant work, with less pure theory (obviously they should come work at the Resolution Foundation). The survey also finds worrying signs in terms of female economists having lower job satisfaction and higher stress, potentially reflecting their general greater dissatisfaction with the status quo of the discipline.

Monitoring mobility. The Social Mobility Commission’s annual State of the Nation report is out this week. It is long, but the focus is really on two issues: child poverty having risen and unequal access to education opportunities and professional jobs for those from less advantaged backgrounds. Rather than lots of new analysis, it’s more use to you as a compendium of facts, with a helpful explicit focus on each of the UK’s nations. Not new, but still awful, is the reminder that child poverty is up 700,000 since March 2012…

This week’s chart is a simple attempt to answer the question a few people have put to me: why are the government considering vaccine passports despite loads of Tories hating the idea? Two basic facts provide most of the explanation. First, the Delta variant being so much more transmissible than its predecessors has killed off the hope that herd immunity is remotely achievable without almost everyone being vaccinated or getting Covid. Second, as COTW shows, vaccine take-up is plateauing at significantly lower levels as you go from older to younger cohorts. 90 per cent of the oldies are getting vaxed, only 70 to 80 per cent of us middle aged types are jabbed, and it’s just 60 per cent for 20-somethings. There are some vaccine supply issues, but that seems largely to be affecting second dose timings and (possibly) decisions about vaccinating teenagers. The smooth plateauing of these first dose rates at progressively lower levels implies that take-up, not vaccine supply, is the dominant limitation. Recent days have brought much better news on case rates, aided by the weather, football ending and school holidays. But countries around the world are coming to terms with the reality that if the virus is this transmissible, hopes about leaving vaccination decisions purely to individuals may not cut the mustard, with nudges of hard (see France) or soft (the UK so far on vaccine passports for nightclubs) varieties following. The Prime Minister may be an instinctive libertarian, but the Delta variant, it turns out, is not. 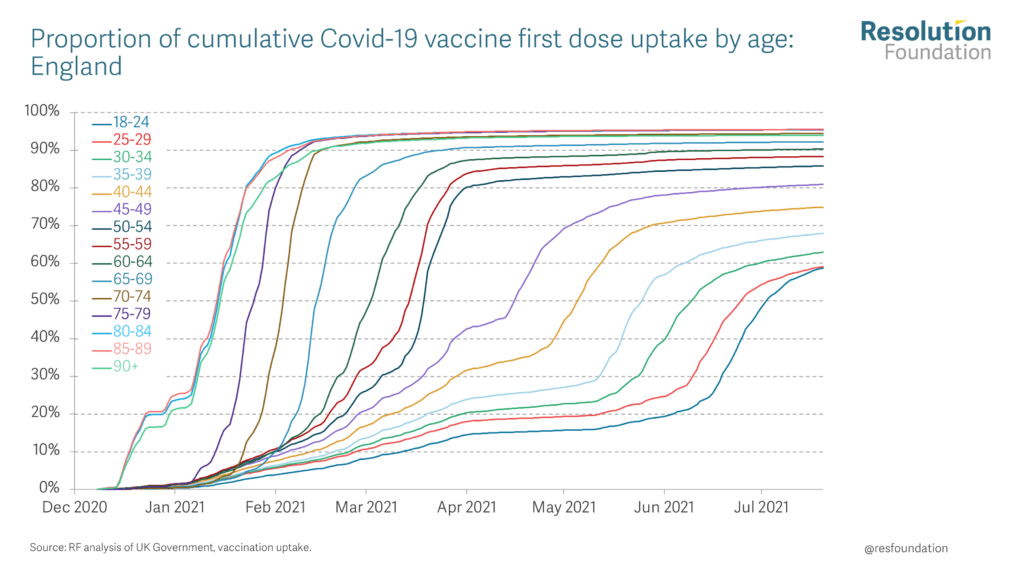