2020 is failing badly on the calming down stakes. Yes the Iran crisis has de-escalated (slightly), but the Royal Family has not. The Sussex’s want out, Barry Gardiner wants in. Neither’s going to happen.

Ultimately this is about trust. We were promised less news and we have been betrayed. But don’t worry – TOTC delivers on its promises. So, after our two-week foray into the past and future of the UK economy, we’re back to the day job – providing a selection of reads to power you through the weekend.

And speaking of delivery – drumroll please. The winner of last week’s MAJOR music quiz is one Sophie Dangerfield. The million pound cheque signed copy of David Willets’ brand new edition of The Pinch is in the post. Thanks for everyone that entered – apart from those pointing out that taking part was contributing to the productivity crisis. Kill-joys…

So long, farewell. He’s not off until March, but Mark Carney delivered something a lot like a valedictory speech yesterday. It was a speech of two halves – perkiness about the past (with lots of detail on how he led the Bank through the messy 2010s) and clear views on what others should do in future. On the latter he really wasn’t perky – “winter is coming” isn’t what you want to hear from your central bank’s boss. In the short term he leaned a little into a rate cut being required in future because of the weakness in the UK economy (something his MPC colleague Jonathan Haskell made the case for at RF pre-Christmas). But of longer-term relevance he asked if the “current inflation-targeting framework… needs to be adjusted or even replaced.” Why? Because, as we’ve noted before, the Bank of England hasn’t got much scope to deal with anything more than a small slowdown. He’s not, however, keen on the main option for giving the Bank more ammo – a higher inflation target. But (as he notes) that’s actually a question for the Treasury – as is the fiscal policy that he (rightly) said will be needed to pick up the slack when a major downturn does turn up.

Across the pond. Ben Bernanke, ex-Chair of the Federal Reserve, covered similar ground to Mark Carney in his address at the American Economic Association annual meeting this week, albeit with a bit more optimism about Central Banks’ room for manoeuvre. But what those of you after a hundred or more weekend reads should check out is the treasure trove of all the papers from that conference.  If nothing else have a flick through the session titles for some insight into the huge breadth of subjects economists are working on. There are also videos of some simply top-class discussions.

Hot-headed. If you need another reason to be worried about climate change aside from the apocalyptic scenes in Australia, here it is. New research from Russia has shown a correlation between rising temperatures and more aggressive behaviour. On days where temperatures were above 25 degrees, there were 0.6 more homicides per million people, so an extra 87 deaths in Russia due to violence. In even bleaker news, this link is even stronger on weekends and against women between 25 to 44 years old, suggesting domestic violence is even more correlated to higher temperatures. Not great news when the last decade was the UK’s second hottest in the past century.

Expensive art. How long should an artist have exclusive rights to the art they create? That’s the question asked in a great blog from Matt Clancy reviewing the evidence on copyright. We want authors and musicians to have an incentive to create, so obviously some copyright is desirable – otherwise those of us less creatively talented would rip-off the work as soon as it emerged, snaffling any returns to the creative effort. But long copyright periods have very real costs in terms of the spread of ideas and art. It’s well worth your time – not least for combining discussions of the impact of copyright on both 19th Century Italian opera AND Wikipedia pages about baseball.

Living languages. Ask the Welsh (preferably in Welsh). That’s the conclusion from recent research from New Zealand looking at endangered languages. It turns out there are a lot of them, with between 50 and 90 per cent of the world’s languages set to be extinct by 2100. The paper compares the indigenous language of New Zealand, te reo Māori, with the Welsh language, using a model that predicts how likely it is to survive in the long term. It’s good news for Welsh, which is predicted to thrive with both lots of people learning Welsh, and lot of parents passing it on – four in five children aged 3-4 with two Welsh-speaking parents are able to speak Welsh. The future prospects for the Māori’s language looks… a lot less rosy.

Here’s a riddle. The employment rate is up by more than 10 per cent since 1994. The number of unemployed people has halved. And yet the proportion of us who’ve never had a paid job in our lives is up by 50 per cent. This paradox is the subject of a new RF report. What explains this? Not people living it up on benefits as some have suggested, but a big fall in various types of earning while learning – either through sixth-form, college or university. Does this matter? Yes. Earning while learning can boost your long-term career prospects.  These delays in people’s first experience of work can also collide with other life milestones, such as motherhood or ill-health, and shape people’s lives through very extended periods of having never worked. We’re normally batting for the youth against lazy stereotypes. But this week TOTC is here to support any of you telling your teenagers to get on their bikes. 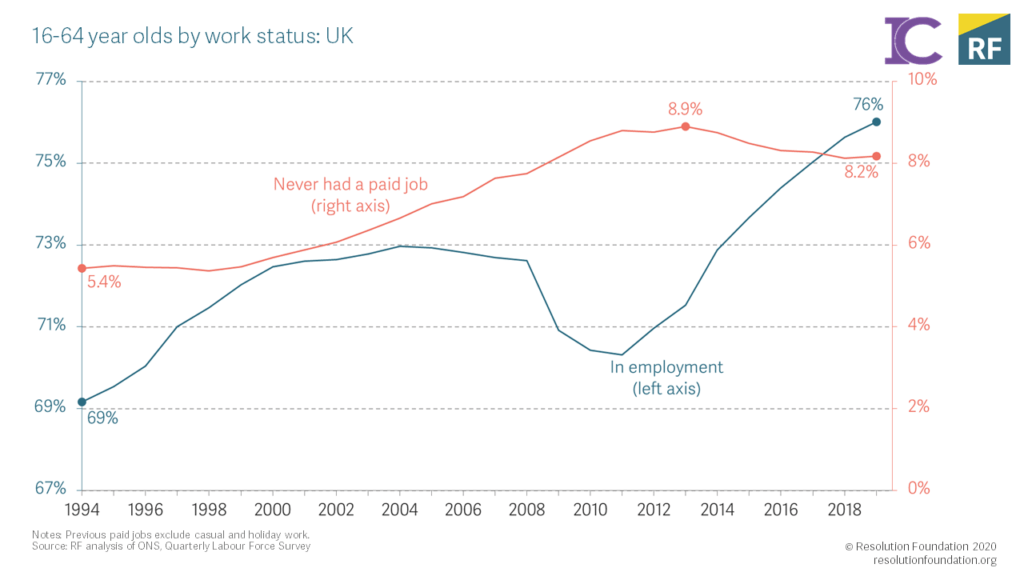