The cost of living has moved centre stage this week – as we noted last week the living standards catastrophe coming in three months’ time means the government stepping in is inevitable. Attention is partly being driven by politics waking up to what’s going on (good), aided by people getting (oddly) relaxed about Omicron.

Energy bills are the centre of this. The backstop for announcing a policy response to April’s bill hike is 7th February, when Ofgem will be finalising the £6-700 rise. So, we should expect the government’s answer in a fortnight or so, and Labour’s suggestions (hopefully beyond removing VAT) over the next week.

The most likely answer? Using the Warm Homes Discount to reduce bills for lower income households. This is messier than acting via the benefits system, but it could play an important role. For that to happen we’d need some fairly major surgery to the WHD system so that it’s:

If you’ve had more than your fill of Omicron/energy bills chat this week, then a) you may want to hibernate for the rest of 2022 and b) you can at least enjoy this week’s reads while you do.

Have a good weekend,
Torsten

Lethargy levy. The 2003 London Congestion Charge was about reducing congestion and improving air quality. But a new paper points out it also reduced the relative price of cycling/walking. Using the fact that people residing inside the congestion zone were eligible to a 90 per cent reduction in the congestion charge while those living just outside it had to pay up, the paper shows that the congestion charge increased physical activity levels, particularly for low-income households and those with cars. Before you decide this is the answer to our obesity problem, note the impact wasn’t massive: time spent cycling/walking increased by around 3 minutes a day.

Streaming students. Older youth avoided the home-schooling trauma, but university students have had online learning galore as online lectures spread mid-pandemic. The norm in future may be hybrid learning, but what effect might that have? A Swiss based study randomly offered some students the option of joining classroom lectures online, while others had to turn up in person. The main lesson is that students weren’t crazy for it – with only 8 out of 100 with the online option taking it up (apparently when they get sick or weather makes travel hard). More worryingly, the offer of streamed lectures widened achievement gaps with low-ability students doing worse and high-ability ones better vs those without the online option. Online lectures are definitely cheaper for universities and reach broader audiences, but (shockingly) staring at a screen may not be the answer to everything.

Labyrinthine logistics. There’s a lot of supply chain chat around these days, which is dangerous because there’s precious little supply chain knowledge. To help fill the gap read this fascinating interview with a supply chain software CEO. Remember this global supply chain crunch is to a large extent about global capitalism adjusting to the big shift towards goods consumption (a new TV can’t give you covid like a pub visit can), that is particularly big in the UK and US. E-commerce logistics being far more complex than normal retail compounds the difficulties. It’s a more interesting read than I’m making it sound – and a lesson that walking around the real world can often help us understand economic phenomena. Our Resolution spreadsheets aren’t much use when the problem is not having enough space for storing containers, or trucks to move them…

Brain drain gain. Almost everyone has VERY strong views on the economic impact of migration on the UK. Depending on who you are it’s the cause of, or answer to, all our economic woes (we’ll have a paper on this nonsense for the Economy 2030 Inquiry shortly). But we don’t often talk about the impact on the countries from which people have emigrated, beyond warnings of brain drains – with the most talented leaving and lower prosperity for those left behind. Recent research (free version) examining changes to US visa rules for nurses, challenges a simplistic version of that argument. Wider migration opportunities to the US caused increased enrolment and graduation of nurses in the Philippines – indeed the increase in nurses was far (9 to 1) higher than the increase in emigration of nurses. Some brain draining may still be going on (many switched to nursing from other degrees), but graduation rates were higher overall. The lessons? Migration isn’t a simple zero-sum game, and we shouldn’t treat human capital as some kind of fixed commodity.

Blocked bullies. I don’t think the government is going to close schools again, but the thought of home schooling returning because the teachers all get Omicroned is causing me mild panic. In a bold attempt to make us feel better about kids being stuck at home/losing out on learning/potentially being scarred for life, a paper points to a silver lining: the pandemic also disrupted school bullying. The authors demonstrate Google searches for bullying/cyberbullying are correlated with actual bullying intensity over time and geography, and show that such searches dropped by about 30-35 per cent during spring 2020. In other news, never seeing the sunshine reduces your chance of skin cancer, and is still a very, very bad idea.

A lot of rubbish is written about the UK jobs market. First up is the idea it’s beset by rapid and accelerating change. In fact, structural change in terms of some sectors growing while others shrink is at its lowest level in a century. Second, is that our jobs market is getting ever more polarised between ‘lovely’ and ‘lousy’ jobs – as middle earning jobs disappear, while low and high paying ones grow. As this week’s Chart of the Week shows, the vast majority of jobs growth in the UK over the past two decades has actually been in higher-paying roles. That’s particularly true for women, though they are still over-represented in lower paying roles (the patriarchy might be ending but it’s going to take some time). This doesn’t mean all is well in our labour market – insecure work is up, the young are concentrated in low paying sectors and everyone’s earnings are being stuffed by high inflation and low growth. But it does show that while economic change can be scary, disruptive and damaging (as many areas and industries found in the 80s), it can also create new opportunities. 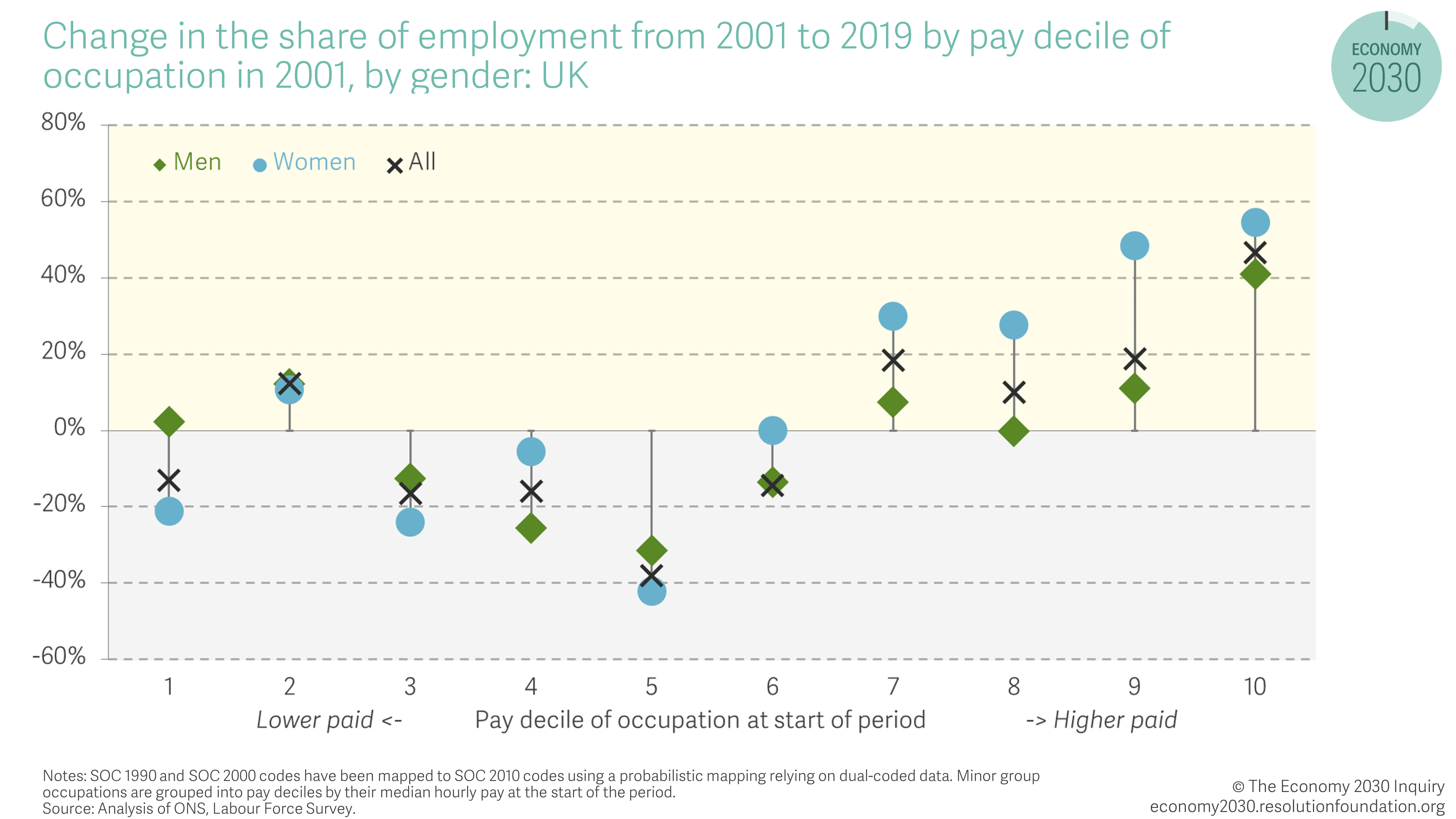