Winter is coming and so is the Chancellor’s Winter Economy Plan, announced yesterday. Since the plan is a) brand new and b) fiendishly complex, we thought we’d devote a TOTCs special to it. It’s complicated, so there are inevitably good and less good elements. But the big picture is this – it is not a strategy for delivering on the Chancellor’s stated objective to “protect as many viable jobs as we can”. Why? Because while it will help some firms keep on workers, major design flaws mean it won’t do much in lower paying sectors where the economic pain of this crisis is about to bite.

I hope it’s of some use to you – and obviously if this short and sharp five chart version isn’t enough, you can read the full overnight analysis from the Resolution team (thanks as always for their willingness to sacrifice sleep in the interests of timely analysis).

The context: not so V. Context matters for economic policy making. Shock news I know. And that context today is that we’re not living through the V-shaped recovery that optimism bias led far too many to predict. After swift bounce backs in GDP and retail sales from the total economic stagnation of lockdown, the recovery was slowing – even before the recent return of rising virus cases & social distancing restrictions confirmed difficult months lie ahead. Google mobility data suggests that activity levels have stalled well short of previous norms. 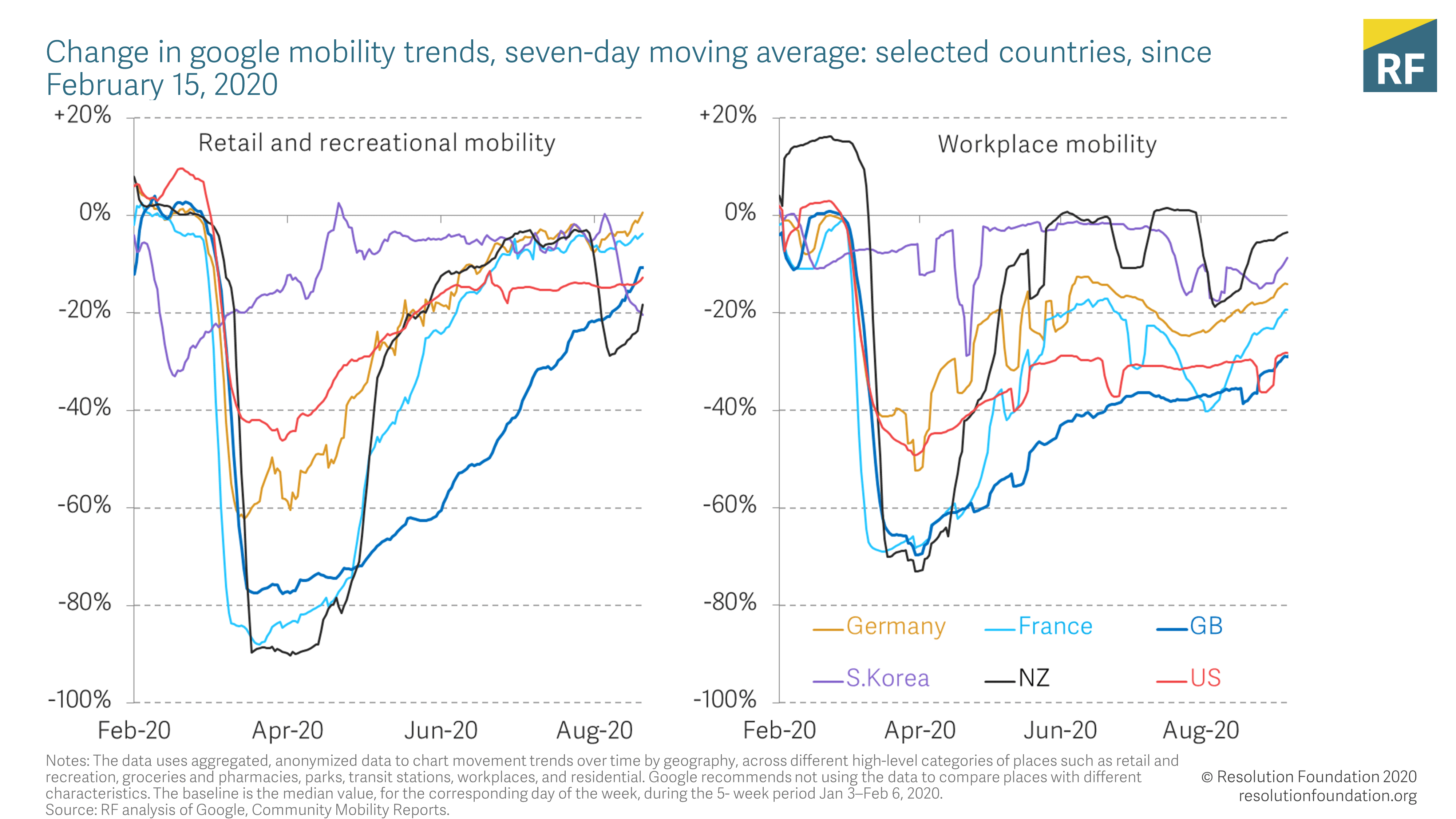 The Chancellor’s job therefore was to bring economic policy back in line with both economic reality and social distancing restrictions. He did this by rightly extending support for firms and workers beyond cliff-edges at the end of October (for wage support) and early November (for guaranteed loans).
Let’s focus on the centre piece of the Chancellor’s plan, the ‘new’ Job Support Scheme (JSS). Now, in reality this is an extension of the flexible furlough part of the existing Job Retention Scheme, that since July has allowed employees to return to work for fewer hours than they usually work with government paying elements of their wages for the hours not worked.

Rebranding aside, what matters when considering the JSS is to separate out it’s impact on employees and employers. 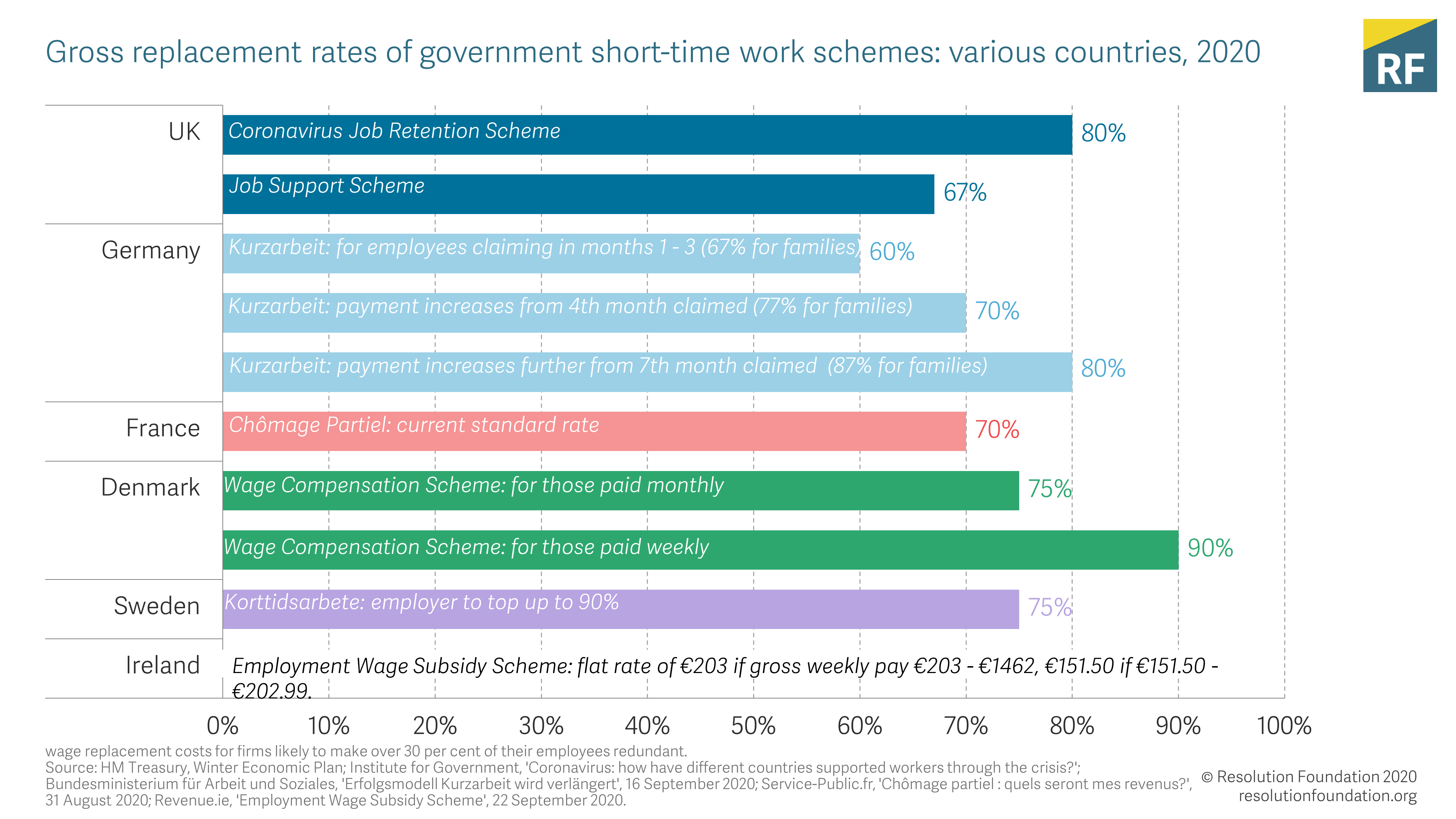 The level of overall income protection is also broadly in line with what workers got on full furlough (ie over 80 per cent in most cases), although less than they are currently receiving on the existing flexible furlough scheme (the wage for hours not worked falls by 22 per cent in the JSS, compared to 13 per cent currently)
But while unions and others rightly focus on the generosity for employees on the scheme, the danger is that this distracts from the crucial policy design question of what incentive employers have to actually make use of the scheme in the first place.

Not generous to employers. Unfortunately, the JSS is not generous to employers and therefore incentives to use it are weak. It asks them to cover not only the wages for hours worked but half the costs of the support to workers for hours not worked (e.g to get someone working 33 per cent of previous hours they have to pay 55 per cent of previous wages). 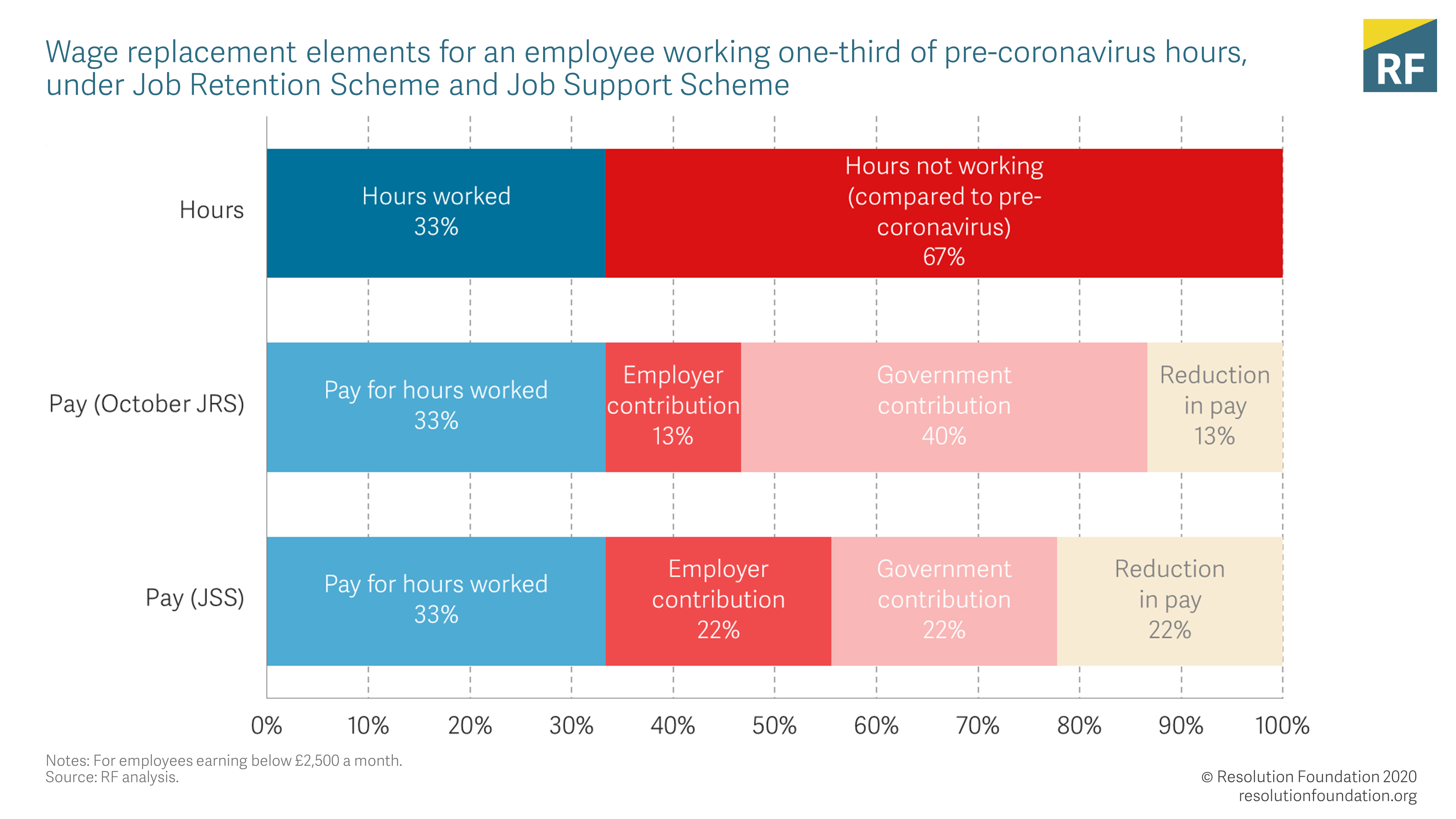 Crucially this means this scheme is not a version of the German ‘Kurzarbeit’ scheme (despite what you’ve read in the media). That’s because during an economic downturn that scheme asks employers to pay precisely zero towards the hours employees do not work.

That zero contribution is crucial to the key objective of the ‘Kurzarbeit’ scheme in a downturn – to help firms and workers cut hours rather than jobs. The JSS gives firms precisely the opposite incentive because the high employer contribution makes it more expensive for a firm to employ two workers half time than one full time. 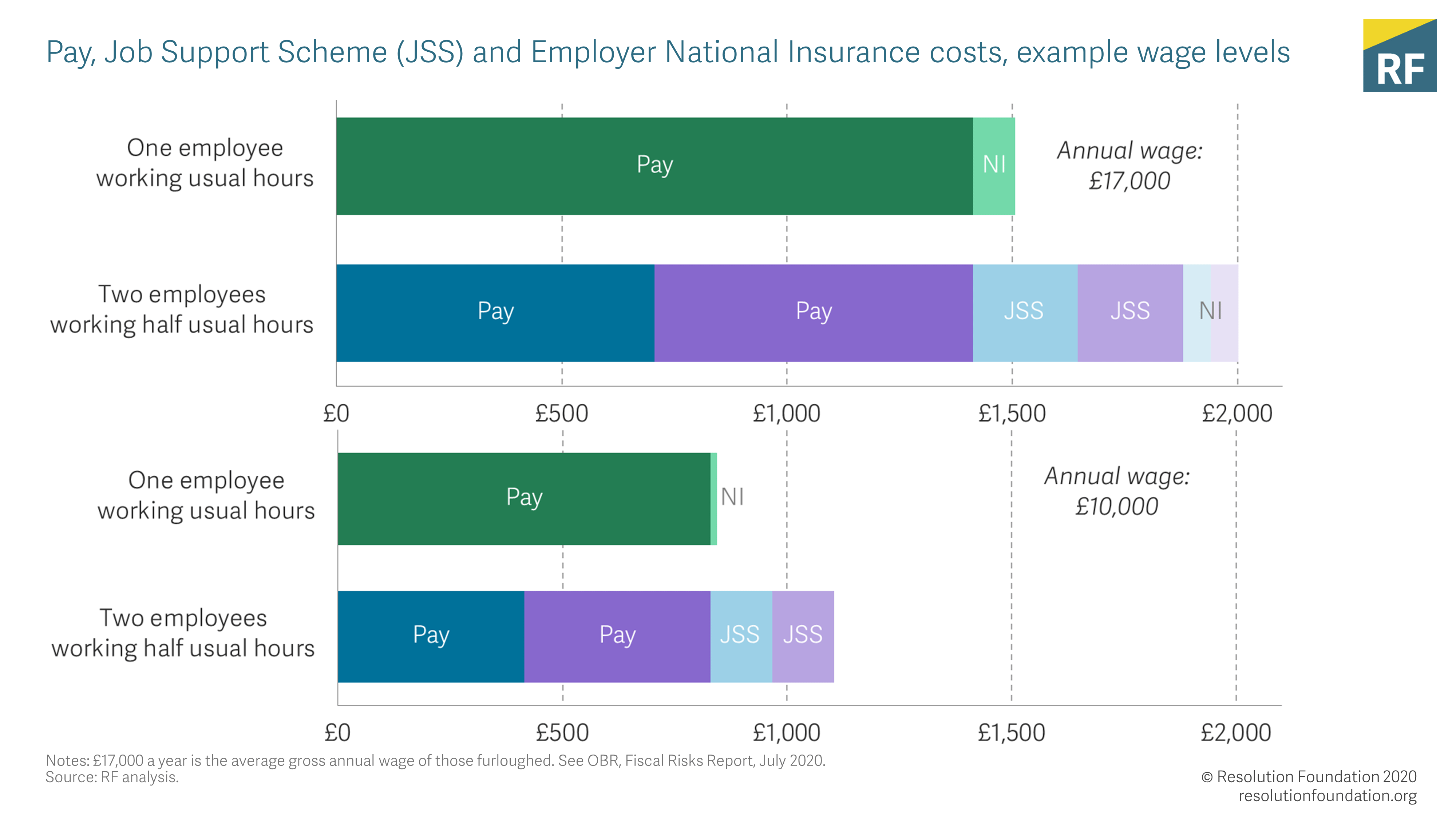 Even where it does work, good luck working it out. There are instances where the very complex interaction with the £1,000 Job Retention Bonus (JRB) offered to employers that retain furloughed workers until the end of January will help overcome some of these challenge with the JSS. But even then it will only do so until the early 2021, and only a small business owner with a PhD in mathematics will have a clue what is going on.

Firms also have a strong incentive to ask their workers (or tell them if they are on zero or short hour contracts) to cut their hours without being part of the JSS – so they can claim the £1,000 without having to pay the employees anything for the hours they aren’t working.

So where does that leave the JSS? It’s a scheme to support firms with less work today and existing strong incentives to hold on to staff (think skilled manufacturing with high training/recruitment/redundancy costs). The only problem? These are not the bulk of the workers in the firing line of this crisis…
What the JSS is not is a scheme to encourage hours rather than jobs cuts where it matters – in hospitality and leisure – to slow the mass shake out of workers that is about to happen. The mismatch between the exam question and answer is shown by the fact that those very same sectors that are currently most reliant on the JRS are also ones with the least attachment between firms and workers, with higher turnover and low costs of hiring and firing. That means that in these sectors the JSS incentives really matter, and its design flaws will mean low uptake and more jobs being lost. 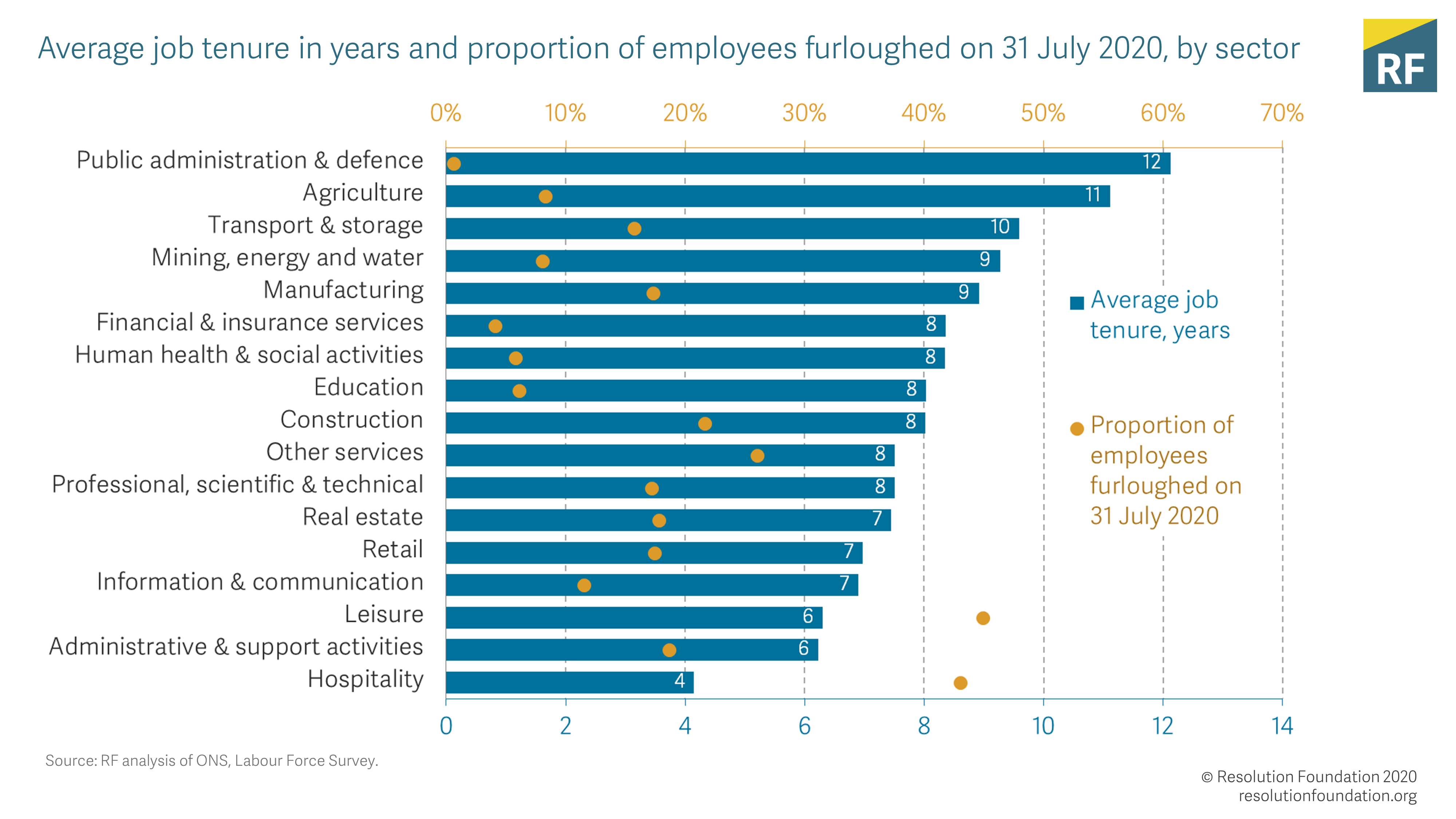 This can be fixed and without spending more money. We should scrap the £7.5bn Job Retention Bonus (that literally no-one thinks is a good policy), with those funds being more than enough to reduce the employer costs of the JSS hugely – transforming firms’ incentives to save jobs.

Matching rhetoric to policy The big picture here is that your policy needs to match your objectives. In this instance this comes down to what your definition of the “viable jobs” the Chancellor says he is focused on saving is. My view (and also that set out by the Chancellor in what he said) is that if people are doing some work then that is more than viable enough in these traumatic times. But the JSS sets a much higher bar for viability, focusing only on jobs where an employer places very high value on maintaining that specific individuals’ employment and is prepared to pay for it. This means higher skill, higher paying roles.

This latter definition of viable jobs implies a very high churn strategy, arguing that it is better for jobs to be lost in the low paying sectors in the eye of this storm because workers are better moving to jobs elsewhere. But that is a fundamental misreading of the labour market we face, with private sector job creation suppressed not only by weak demand but huge uncertainty.

But that is at least a position. If that is the approach actually being followed, if not set out, by the Government they should say so, and put the wider policy in place to give it a chance of success. That would require direct job creation and hiring subsidies, to ensure people move into new jobs not just out of old ones. It also means protecting the incomes of those whose jobs we are labelling as non-viable by confirming that Universal Credit will remain at its currently elevated level beyond next April. But yesterday’s statement did neither of these things.

The Chancellor was right to come forward with new policy proposals to match new social distancing restrictions. But policy design flaws mean his approach fails to protect the very jobs that are most at risk. With economic winter coming, getting the details of policy right to see workers and firms through incredibly difficult times is anything but a game.