Top of the Charts is taking a short break this week for Easter. But we couldn’t let the week go without sending a single chart because today is a special day for the Resolution Foundation and, more importantly, millions of low earners across Britain. It marks the fifth anniversary of the introduction of the National Living Wage (which also rises to £8.91 an hour today).

The origins of the policy go back seven years to our year-long Review of the Minimum Wage, which concluded that the minimum wage should be raised to 60 per cent of typical hourly earnings. This work was cited by George Osborne as he announced the National Living Wage (NLW) in the summer of 2015, setting our wage floor on course to hit that 60 per cent target. Five years on from its introduction what impact has it had?

Today, the legal minimum wage for workers aged 25+ is £1 an hour higher than had the minimum wage continued to gain ground on typical earnings at its pre-2015 previous rate. For an employee working 37.5 hours a week that’s an annual pay rise of around £2,000 (though still £1,000 less than what they’d earn on the real Living Wage). The policy has brought the share of low-paid workers across Britain to its lowest level in over four decades, and didn’t stop the UK from reaching record employment levels before Covid-19 struck.

And that’s not the end of the story either. The Government has committed to raising the NLW even further – up to 67 per cent of typical hourly pay by the middle of the decade – which would effectively end low pay, and deliver a £2,600 annual pay boost for full-time workers, compared to a world in which the NLW hadn’t been introduced.

This is a reminder that policy can make a huge difference to the living standards of millions of low earners. Of course these radical changes are not risk free – which is why we have the crucial role for the Low Pay Commission in setting our minimum wage rates. But the lesson from the last five years for policy debates is not to ignore the risks of not acting – in this case we’d have missed out on significant wage gains for our lowest earners. And the winners aren’t only in the UK – our example is a big part of the big live US debate about raising the federal minimum wage.

So happy Easter anniversary everyone. 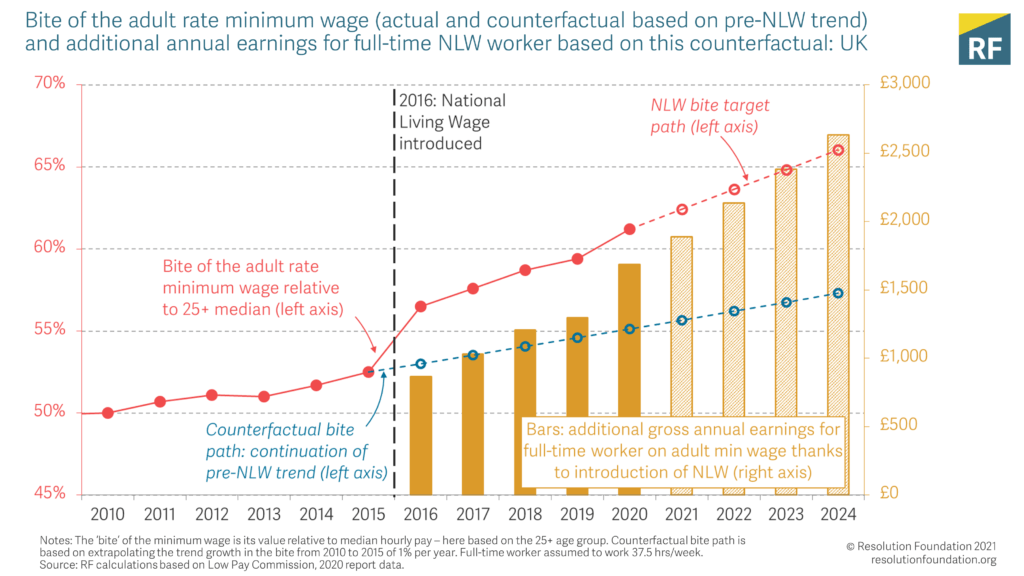