Vaccinations have got the Governor all perky, while Jackie Weaver and Handforth Parish Council have done the same for the rest of the country. Which is nice, although in the former case slightly jarring with the Bank’s forecast for unemployment to rapidly rise by around a million people in the months ahead. This slightly reflects the challenges of thinking about the economy at present: what matters is levels (be that of GDP or employment), but understandably our focus is drawn to shorter term rates of change, especially change from a disaster as grim as that we’ve lived through recently.

But not wanting to break with the generally perkier mood this week, we’ve gone soft and allowed a few more lightly entertaining reads to creep in – from the deep dive into what was going on in Handsworth to some gentle mocking of think tank names. It’s like when the teacher allows everyone to watch a film at the end of term (except of course the kids have been doing nothing but staring at a screen for weeks).

Have a great weekend all,

No authority? I know it’s the question everyone wants to know the answer to. Not will we be out of this lockdown hell by Easter, but was the mad angry chair of Handforth council right to say/shout “you have no authority here Jackie Weaver, no authority at all”? The interweb rides to the rescue with a blog from David Allen Green on the weird and wonderful world of council standing orders. The basic answer = the angry blokes were wrong to say the meeting was illegal, but were probably right that Jackie Weaver didn’t have authority to unilaterally kick them out of the meeting (legal authority I mean, clearly she had the moral authority because they were being plonkers). David rather idealistically concludes the lesson from this episode is that all council meetings should be streamed live. I’m slightly worried that people seeing loads more of this madness might be how democracy dies…

Sexist seminars. TOTCs has discussed before the sociological challenge of loud men in economics seminars. But new research into the seminar jungle at top economics departments takes a different approach – focusing not on how gender affects who talks but how it affects how audiences engage differently with male/female presenters. The summary = more people turn up to hear female presenters, but women get asked more questions (four extra per seminar) and questions are more likely to be patronising, hostile, or a lovely combination of the two. The authors conclusion is that these different ways of treating speakers reflects “implicit bias, or perhaps more darkly, an undercurrent of misogyny in a male-dominated culture”. Which is nice.

Regulating ideas. Reducing red tape post-Brexit is all the rage, but what is the relationship between regulations and technological innovation. A new paper has a look at the French example. Obviously regulations do shape business behaviour – the authors show that firms go out of their way to avoid crossing the 50 employees threshold that brings with it lots of additional burdens (e.g. to have a works council). But they can also reduce the volume of innovation. It’s not just that bigger firms generally do more innovating, but there is evidence that firms just below that threshold do less innovating than we’d expect exactly because the growth benefits of the innovation would tip them over the regulatory threshold. But this doesn’t mean these regulations are the reason there isn’t a French Google – they explain why some regulation might chill minor innovations, but, the authors argue, wouldn’t harm the big radical innovations.

Snazzy titles. This is a disgrace. Think tanking is a very serious business, but some comms types have seen fit to mock the (maybe slightly pretentious??) names that think tank founders give their organisations. They’re not keen on acronyms, or, it seems, a name that helps you understand what the organisation might actually do. Which is fortunate for those of us at the Resolution Foundation who are used to being asked how people can access our marriage counselling services. More constructively these jokers have provided a Name My Think Tank name generator for you to mess around with if you fancy setting up your own think tank. Do it – we’re very pro-competition.

Gigging it. This final piece (full version) isn’t new, but was new to me this week. The imaginatively titled ‘Can you gig it’ investigates the impact of gig economy growth on entrepreneurship (an underappreciated angle given we tend to talk as if the main impact of gig jobs is to reduce standard employment). The research considers the entry of businesses like Uber and Deliveroo into areas, and finds that their arrival tends to reduce other local entrepreneurial activity (i.e. fewer crowdfunding campaigns on Kickstarter). Obviously this doesn’t mean Uber arriving stops major firms being set up – it’s generally less successful forms of entrepreneurial activity that it reduces (remember the UK stands out for having lots of self-employed people earning very little). Now the gig economy’s treatment of workers needs properly regulating, but this is a reminder that there are some groups that struggle to get jobs in the mainstream labour market, and who in some cases benefit from being able to access gig economy work.

As noted above, the Guv’nor’s feeling perky. And with some good reason, with the swift vaccine roll-out allowing restrictions to be lifted in the months ahead. Andrew Bailey also rightly identifies some of the fuel that will power Britain’s bounceback – the staggeringly large £125 billion extra savings that Chart of the Week highlights has been built up. Plus we’re all desperate to get out and do just about anything, so there are grounds to expect a swift bounce back of the hospitality sector once restrictions can be eased. But we should be careful concluding that means it’s all plain sailing. Big increases in unemployment lie ahead of us and incomes may actually fall this year even as GDP rises. Plus those extra savings are huge on average, but they’re concentrated amongst higher income households (poorer ones have actually been more likely to borrow more). A swift look at firms weak hiring and investment intentions (which we’ll discuss with new CBI head Tony Danker on Wednesday) also cautions against assuming a roaring 2021 for the hospitality sector will translate into a booming Britain. Yes, vaccine-driven lifting of restrictions will bring an end to this totally unprecedented phase of the crisis, but that may still leave us needing to tackle a more normal downturn aftermath in the back half of 2021. 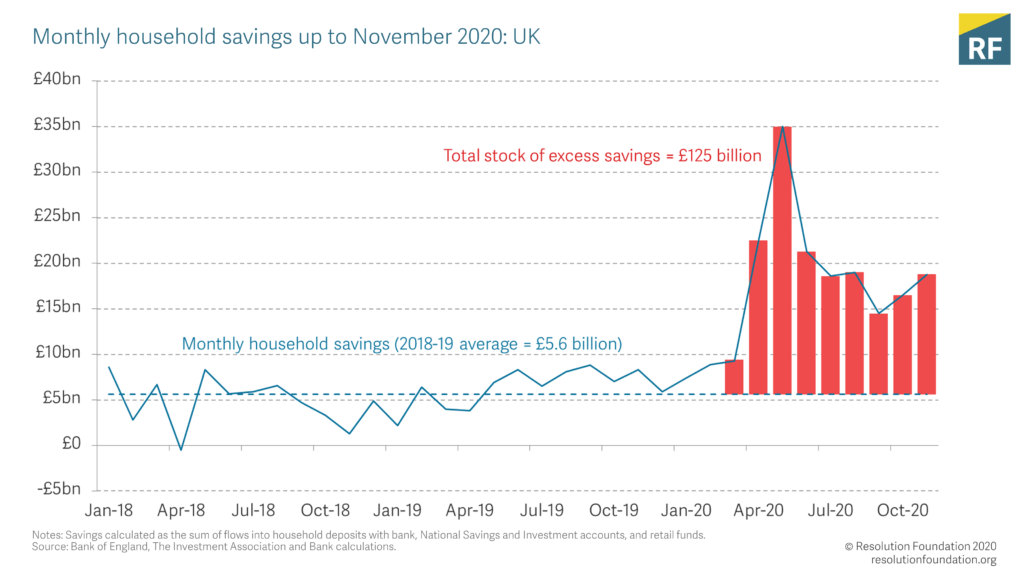