Refreshed from your Easter break? Want a new challenge? How about stewarding the UK economy as the Bank of England’s next Governor. You’ll probably get to steer us through Brexit, and more definitely through the next recession (see this week’s Chart of the Week). All yours for £480k. If you’re up for it, here’s who you may or may not be up against.

To get you prepped for your application and interview, we’re offering some top tips – like why your teenage acne means you’re right for the role, why the job is likely to be important, and why the next Governor shouldn’t just assume the next crisis will look like the last one.

So get applying. Or just have a good weekend.

Pimple power. Spots are an evil invention, hitting teens just as they become obsessed with their looks. But in important silver lining news, recent research offers novel insight into the link between acne and future prospects. It turns out having acne is associated with higher grades and educational outcomes. Apparently pimples and the social angst that goes with them makes you feel less inclined to pick up social pursuits, and more likely to pick up books. Probably more importantly the benefit seems to last into the labour market with higher earnings, for women at least. So kids, don’t envy the clear skinned today, the pimpled shall inherit the earth.

Hot take. While the rest of us were focusing on our acne at 16, Greta Thunberg’s been off reminding everyone that climate change is a very very bad thing indeed. Her speech to MPs this week powerfully argued that “we should no longer measure our wealth and success in the graph that shows economic growth, but in the curve that shows the emissions of greenhouse gases”. I’m taking the new British cake and eat it approach by demanding success on both charts please. It’s also worth noting that the relationship between growth and climate change depends a lot on who, and crucially where, you are. A paper out this week (summary) argues that the warming of the planet by mankind has reduced economic growth in countries that were already hot, while actually increasing it for colder, richer ones – like Scandinavia. Another reason for action on climate change whatever your appetite for Oxford Street getting blocked.

Higher wages, lower suicide? Not only can minimum wages provide much needed pay rises AND proof that policy makes a big difference for living standards – but new research suggests they might even reduce suicide. The US study finds that suicide rates grow slower in states that have raised their minimum wages – with a $1 increase associated with a near 2 per cent lower suicide rate. This might sound slightly farfetched – and the study is not conclusive. However, we do know those in lower-income households are more at risk of suicide than people living in richer households. Our own research also shows that slightly higher earnings disproportionately increases happiness of the lower-waged.

The one child more crime policy. People have argued minimum wages are big state interventions – but they’re nothing compared to China’s one child policy. Strong preference for sons means that there are 120 boys for every 100 girls amongst Chinese children. At the same time as China’s been loading up on men, rates of crime have hit the roof – up six-fold over the last 30 years. New research finds that these trends are related (full paper here). This isn’t just the obvious gender stereotype of boys growing up in more male dominated environments being more impatient/risk taking – although that is there. The bigger effect seems to be the pressures on men in a marriage market stacked against them – with unmarried men turning to financial crime in order to meet the costs of competing. Why? Because as brides have become scarcer, they’ve become more expensive (bridegrooms are often expected to make substantial financial gifts to the bride’s family). The good news is that financial, rather than violent, crime is increasing. The bad news: romance is dead.

Shocking shocks. What happens when an economy is hit by bad news is a very important thing to understand if policy makers want to be prepared to respond. In the aftermath of the financial crisis, wages fell far more than anyone expected (which is why they’re still £9 a week below their pre-crisis level) while employment held up surprisingly well. So should we assume that future recessions will follow the same pattern? No is the clear takeaway from new research that investigates what firms say they actually do in the face of economic shocks. The work shows that the most likely response is for firms to cut jobs – before cutting back wages. There’s an important lesson here. How the financial crisis played out, with a huge depreciation and higher inflation pushing down real wages here more than in other countries, was crucial to what happened. That might not be what happens in future. Planning for the next crisis should include listening to what firms say they will do, not just hoping that big dole queues won’t turn up because they didn’t turn up last time.

Chart of the Week. The role of macroeconomic policy in responding to future recessions is rising up the agenda. Which is a very good idea, as this week’s chart shows. It examines how many years of consistent growth our economy has managed over the past three centuries before a recession turns up. Since the 70s we’ve seen the economy start shrinking after 9.7 years, on average. We’re now 9 years into this growth phase… In the US, the debate is focused on the need for a greater role for fiscal policy (as Chris Giles highlights in today’s FT), with further thinking on the costs and benefits of deficits and calls to reverse the dirty perception of ‘fiscal stimulus’. On the monetary side, the Fed is carrying out its own review of whether its tools are sufficient. In the UK there is far too little of this discussion, with our debate often focusing on what was done right/wrong last time, rather than what should happen in future. We’re launching our own Macroeconomic Policy Unit to focus on this question (follow @JamesSmithRF for more) because, if the last ten years teaches us anything, it’s that the costs of macroeconomic failure are very high indeed for British households. 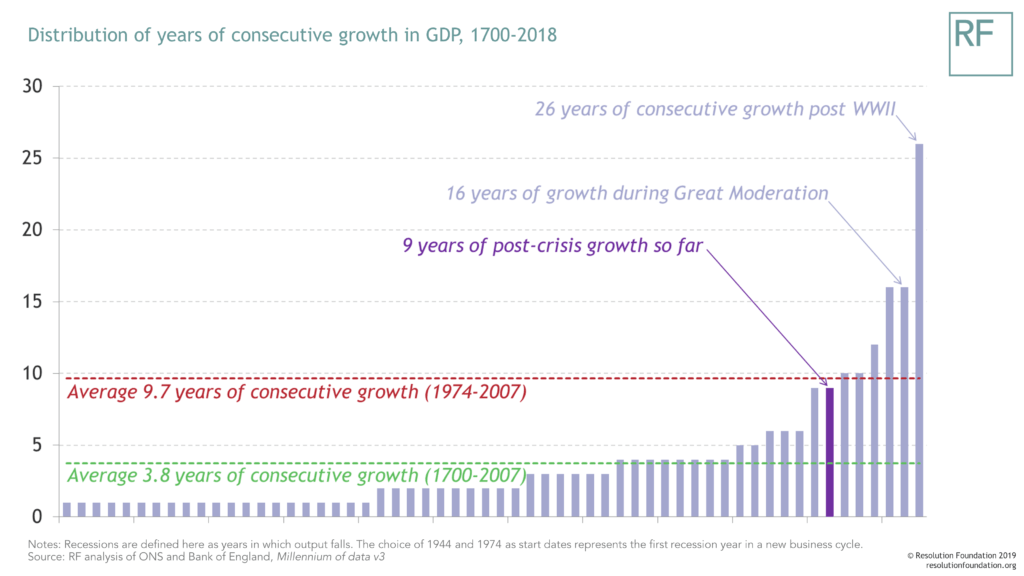