Here’s a thing: we increasingly don’t like economic change, but there’s quite a lot of it coming – in part because we’ve chosen it. This week’s TOTC special digs into this paradox, which is part of the motivation for The Economy 2030 Inquiry we and LSE’s Centre for Economic Performance have just launched.

Our starting point is that the UK’s disastrous recent combination of low productivity and high inequality makes a renewed economic strategy desirable. But what makes one essential is the scale and nature of the change to come.

This project will seek to better understand the change that Covid-19, Brexit, technology and the Net Zero transition will bring to the UK economy, but also help policy makers navigate it. The Inquiry will be the main focus of the Resolution Foundation’s work over the coming two years, combining rigorous research, public involvement and concrete policy proposals. Please do get involved!

Recently, someone preparing a national election campaign in a major European country came to see me. They were very focused on one question: how to satisfy the voters’ desire for economic protection against change. It’s a good question to ask. UK citizens’ fears for the future have risen, with the share of us expecting our kids to be poorer than we are rising from 12 to 45 per cent since 2003. In parallel, the proportion of us thinking the state doesn’t do enough to protect us is up since 2010.

It’s not a coincidence that a government that put in place the furlough scheme (the biggest income protection policy in UK history) is doing well electorally, nor that it’s just dropped the ultimate nostalgia bomb: (re)launching Great British Rail. This week’s row about an Australian free trade agreement reinforces the point. Global Britain is rhetorically a buccaneering free trader, but half the Cabinet don’t want the deal (given the change it brings for some farmers) and the official position now appears to be the thing is so desirable it should be phased in over 15 long years. This is consistent with downplaying the change that Brexit will bring. A Thatcherite, let the change rip, political programme this is not.

Why does this matter? Because big change is coming in the 2020s.

…but lots of change is coming

The UK economy will be markedly different in 2030. The homes we live in and the cars we drive will be heated and powered very differently. Trade shifts will have changes which firms are competitive. The way many of us work may well be different too as a result of Covid-19. This reallocation will bring benefits, but also costs.

The lasting impacts of the pandemic are highly uncertain but we won’t just be returning to the pre-Covid world. Online shopping is here to stay (new data today shows it accounting for 30 per cent of sales in April, up from 20 per cent pre-crisis). Greater home working means more lifestyle choices for professionals, but forces lower earners who rely on their spending to find new jobs in new places. 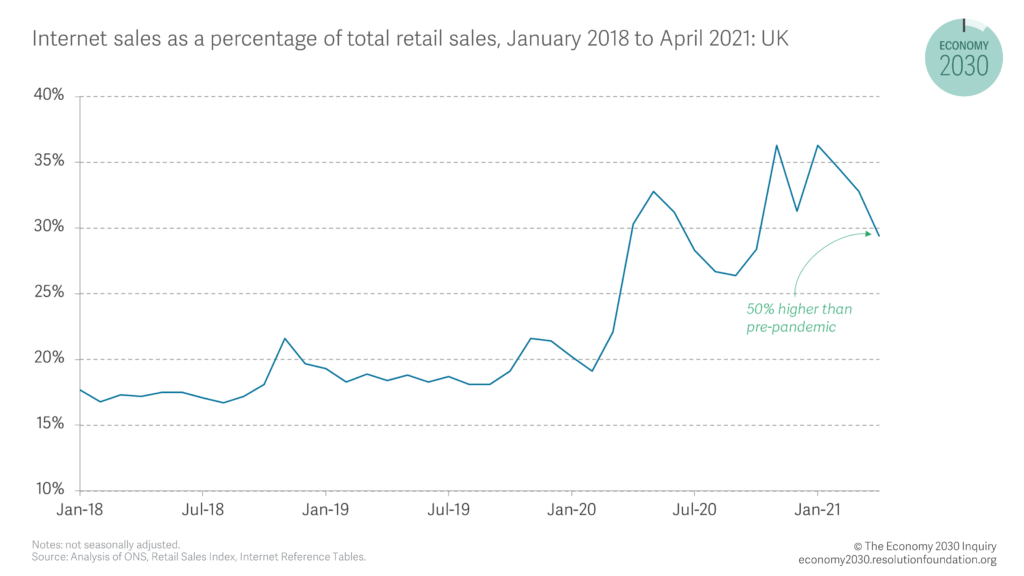 As well as recovering from Covid-19, this decade will see us emerging from the EU, urgently transitioning towards a Net Zero future while adapting to technological and demographic shifts. The former means higher trade costs for firms (UK-EU goods trade was down 14 per cent in Q1 2021 versus 2020), but new found policy freedoms for policy makers. It will see some of our most productive firms shrink, while others grow. New approaches to supporting farmers as we take back control of agricultural subsidies will drive more change than any Australian trade deal.

Action on decarbonisation is urgent: we need to go from installing almost zero heat pumps each year, to putting in 3,000 every single day by 2030. The opportunities are big, but the short-term costs are significant, capital and labour need to be reallocated, and none of the hard decisions have been taken. 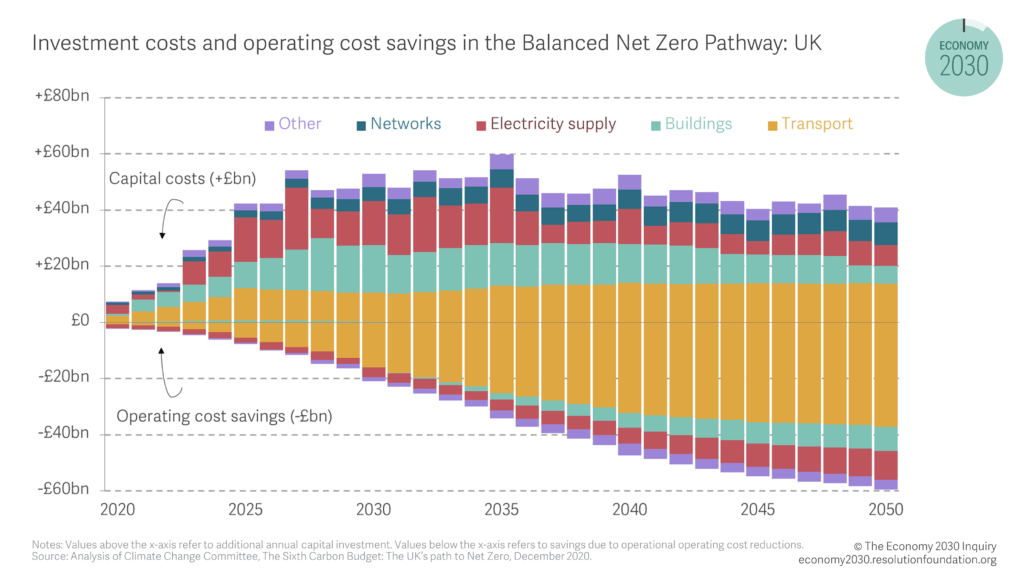 Meanwhile, this decade is the fastest for our demographic transition in the first half of this century and we need to make a success of the change that digital technologies will bring to how we consume and how we work.

We’re not used to change. Or very good at handling it

Some will be relaxed about this, arguing we’re used to accelerating change. They are wrong. 21st century Britain has seen flat or falling economic dynamism. Over the last decade changes to which sectors people work in has taken place at the lowest rate since the 1930s. Pre-Covid voluntary job-to-job moves were down 37 per cent since the start of the millennium. We’re staying put not wrestling with permanent change. 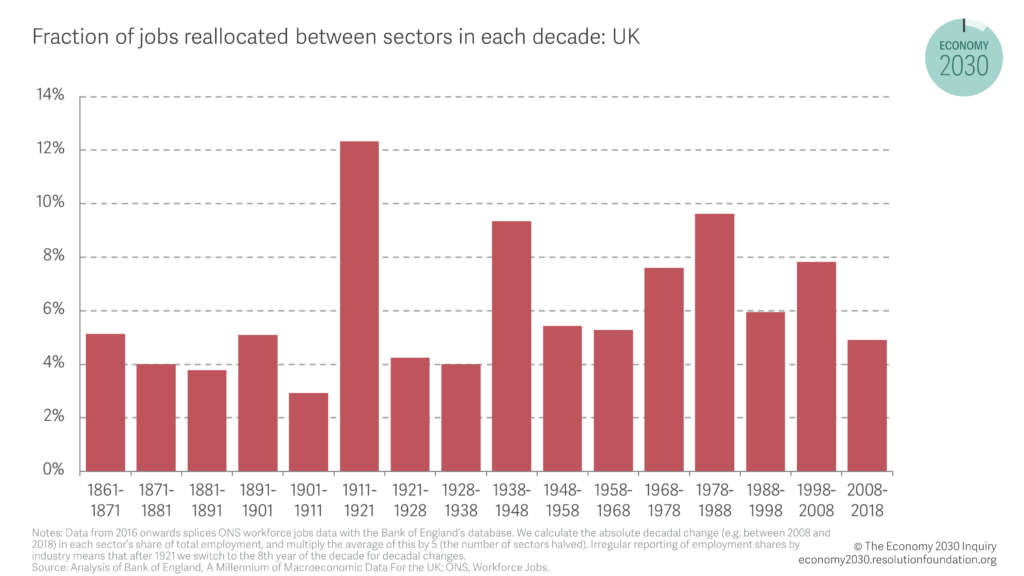 When economic change has happened, we’ve struggled to make it inclusive. 1980s deindustrialisation did see fast rising incomes for the top and middle, but with very high costs for people and places losing out: long-term unemployment trebled in the early 1980s and some areas – including Wansbeck and Liverpool – lost over a fifth of their jobs. We’re still living with the legacy of that change today.

The context for change is a prolonged period of economic weakness

No-one should assume we will automatically make a success of change. The UK starts with some major assets, from high employment, world beating services and universities and a political consensus over decarbonisation, but it’s hard not to conclude that we have major economic challenges too that must be addressed. The last decade saw the slowest productivity growth for over 120 years, while we live each day with higher inequality than any EU country save Bulgaria. Poor British households are much poorer than their equivalents in France or Germany, while regional gaps here at home mean GDP per capita in London is 2.4 times higher than in Doncaster. 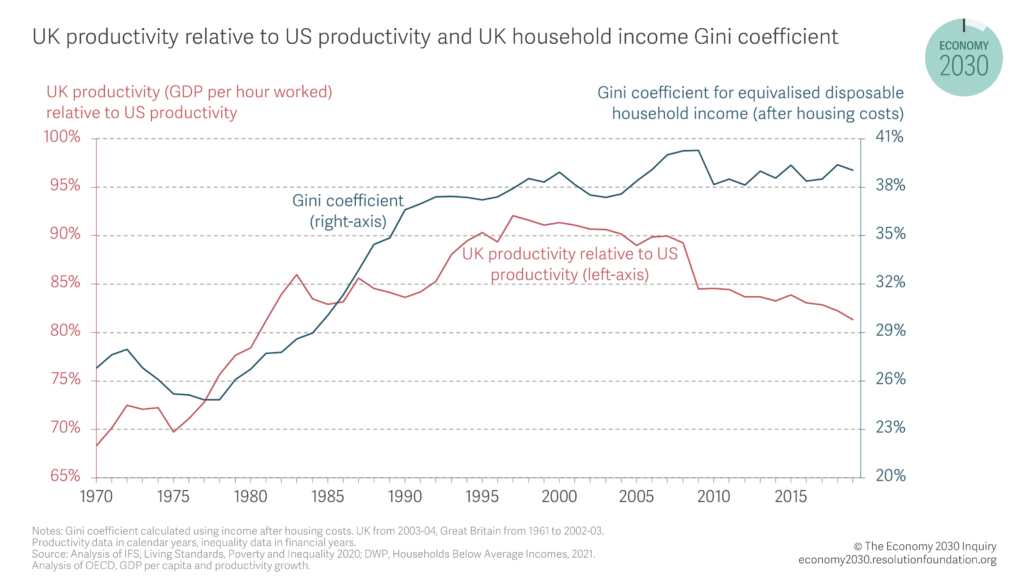 There is a lot at stake

The job of the 2020s is to respond to this change, and renew our economic strategy in the process. If we don’t, we risk prolonged relative decline. And don’t think that can’t happen: Italy was as prosperous as Germany in the 1990s but has flatlined economically since. We’ve likewise fallen further behind Germany and the US recently. If that continues in the 2020s, we’ll have GDP per capita much closer to that of Italy than Germany by 2030. 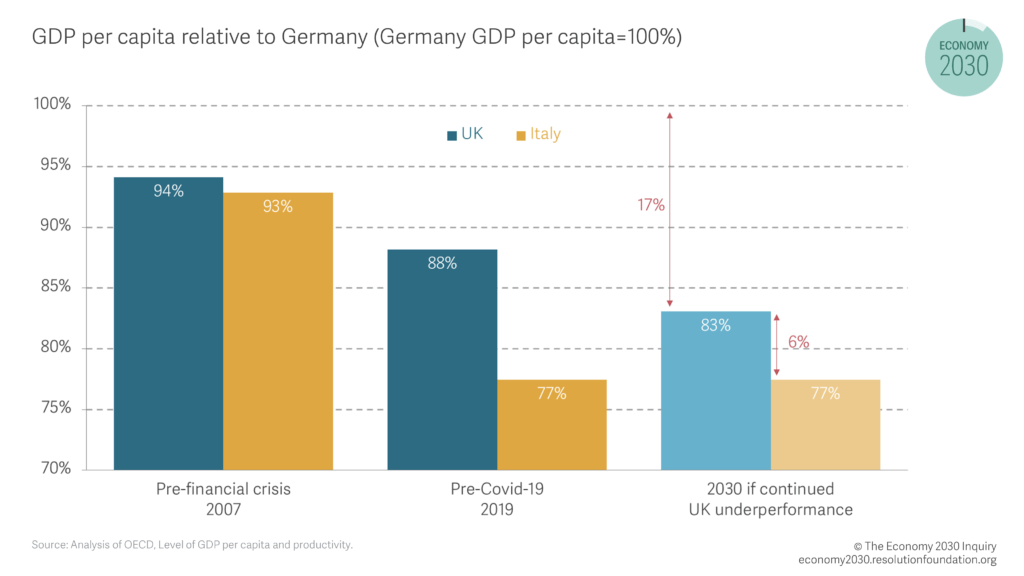 So, the scale of change to come should provide the trigger for major reform, with a renewed vision for how we successfully compete in the world, ensure widespread good employment, and seize the opportunities that decarbonisation may bring. We might then end this decade as a more prosperous, fairer, greener and healthier nation. But making that a reality means a plan that no major UK political party has on offer. It means honesty about the trade-offs involved, and self-awareness about how the UK fits into a world economy being shaped by competitive but connected superpowers: China, the EU and the US.

And most of all it means wrestling with the paradox that we are a country that has become more fearful of the future and of the change it might bring, just as a decisive decade of change has arrived – in part of our own choosing. The 2020s will be about shaping that change, recognising the difficulties it will pose but also the opportunities it brings. That is ultimately a challenge not just for our economics, but for our politics too.