This morning’s labour market statistics from the ONS showed a familiar picture of a tight labour market alongside a deepening real wage squeeze. But there are also some signs of a turning point, with wider economic weakness at the start of 2022 potentially feeding into softening labour demand.

In some respects, this morning’s statistics make familiar reading. They show a tight labour market following a rapid employment recovery post-Covid. Vacancies are again at a record high in the ONS’s three month data (in the three months to May). 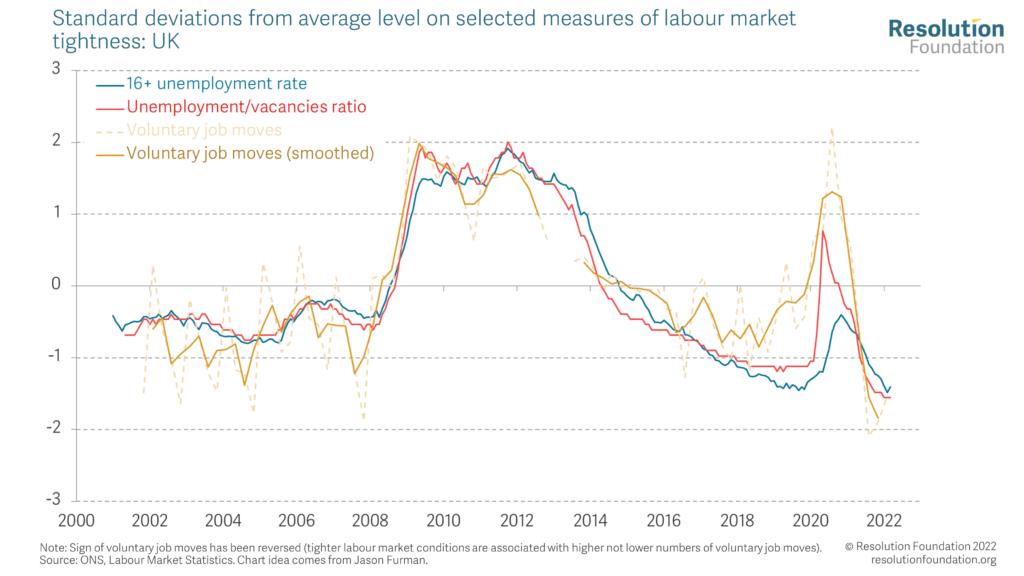 The other familiar story is of lower participation post-Covid. There was some encouraging news in the rate of working age inactivity falling for a second month (from 21.5 per cent in the three months to February to 21.3 per cent in the three months to April). But this came from higher participation among students; there is no sign of any reversal of falling participation among the groups which have driven the large rise – workers over the age of 50, and with long-term health conditions. The seemingly enduring impact of Covid on participation is bad news, and also, somewhat puzzlingly, unique to the UK, with many other countries experiencing complete recoveries in participation even after larger falls during Covid. 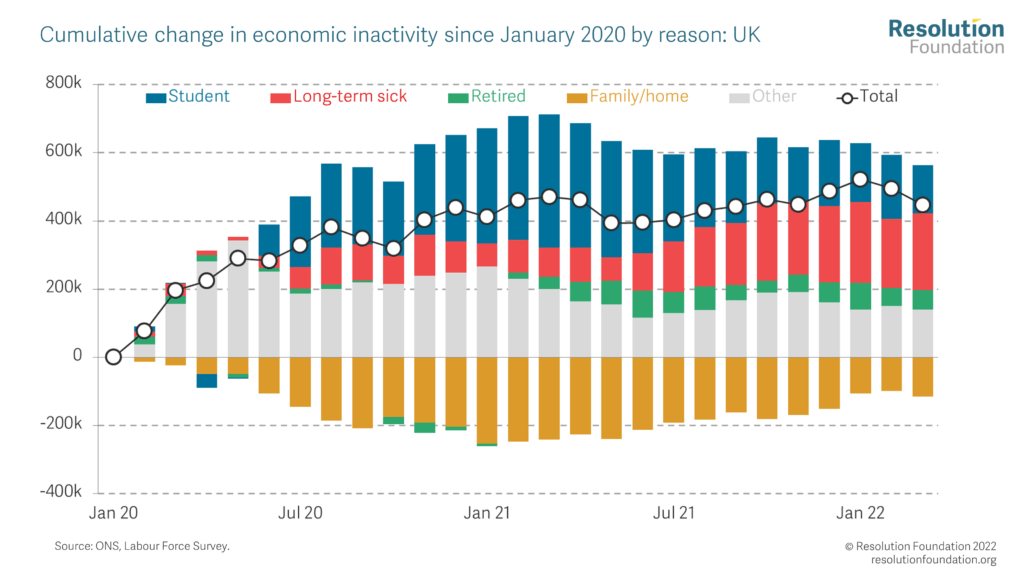 The shadow hanging over today’s labour market statistics was the slowdown in economic activity. GDP growth was negative in both March and April (in part, admittedly, due to the wind down of test & trace). Indicators of future activity are also weak – the purchasing managers’ index for May showed the largest fall since the start of the pandemic, and points to stagnating activity in the face of rising input costs. Consumer confidence is at its lowest point since 2008. Given this picture, it’s natural to wonder how long it takes before the wider economy affects conditions in the labour market.

We may not have to wait. There are some early signs that the labour market is starting to cool. Firstly is the fact that pay growth has stopped rising, and in the latest data is actually falling. To see this we have to look at the single month data, which does carry the health warning of being more volatile. In the single month AWE data, regular pay growth softened to 4.1 per cent (down from 4.3 per cent in March), and total pay growth fell more sharply, to 4.8 per cent in April, down from 9.9 per cent in March. 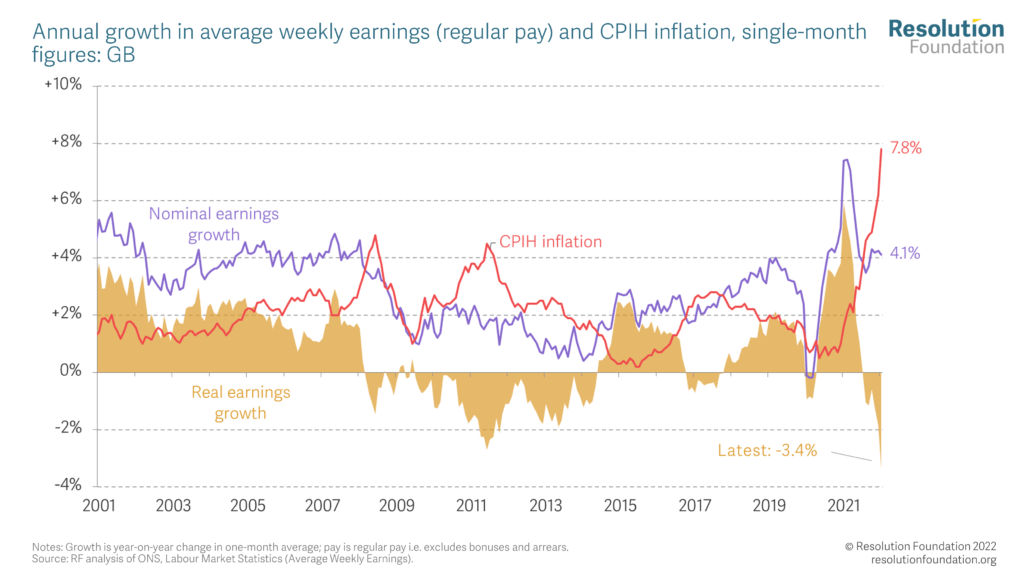 The real pay squeeze is therefore deeper if we look at the single month data – with regular pay adjusted for CPIH inflation down 3.4 per cent on the year. This is the fastest fall in real pay growth on record (the AWE series starts in 2001). Real total pay growth remains positive – just – at 0.4 per cent. But it’s worth remembering that there is still a positive furlough measurement effect in the annual pay growth data – because we are comparing to a period (the second quarter of 2021) when there were a few million workers on furlough. We should take off around half a percentage point to get to the underlying growth rate, which means even total pay growth (allowing for bonuses – which not all workers enjoy) may now be negative in real terms. Another warning note on pay is that in May, median monthly pay among employees was down on the April figure. It’s unusual for this series to fall in cash terms.

The other sign of cooling is in employment figures, where the single month data for April showed a marked rise in unemployment, and a similar fall in employment. However, this series is very volatile – especially so in recent months – and so should be treated with caution. It is, however, consistent with the HMRC’s employee count, which may have stalled in May, after the usual revisions are taken into account.

The labour market is traditionally thought of as a lagging indicator of economic activity, with slowing hiring or rising unemployment happening in response to, rather than at the same time as, slowing activity. That thinking may underpin the Bank of England’s expectation that unemployment will rise this year in response to slowing spending, but not until the end of the year. With this in mind, it might be surprising to think that weakening activity in the early part of 2022 might already be showing up in the labour market numbers.

But it’s not as clear cut as – consumers spend less, firms notice, and then decide to cut hiring or jobs. For example, in the financial crisis, GDP growth turned negative in the third quarter of 2008. But vacancies were already falling in the summer of 2008, and by the third quarter of 2008 unemployment had started rising and employment falling (albeit slowly at first). So it’s not impossible that the recent weakness in GDP and the poor outlook might already be contributing to a cooling in the labour market.