The latest labour market statistics from the ONS showed the labour market continuing to tighten despite the Omicron variant. There are tentative signs that this is starting to feed into stronger pay growth, but not by enough to keep pace with prices, meaning workers’ wages are being squeezed in real terms.

In the end, despite widespread disruption in the run-up to Christmas, the labour market appears to have come through the Omicron variant unscathed. There was a dip in vacancy numbers, with the ONS’s single month vacancy figures showing falling vacancies in November and December, and the number of online vacancies falling too. But the latest data shows vacancies are again rising, up 3 per cent in January from December in the ONS’s data, reaching 1.2 million, close to the high point from October last year. The number of online vacancies has also bounced back, leaving us with near-record vacancies on both measures. 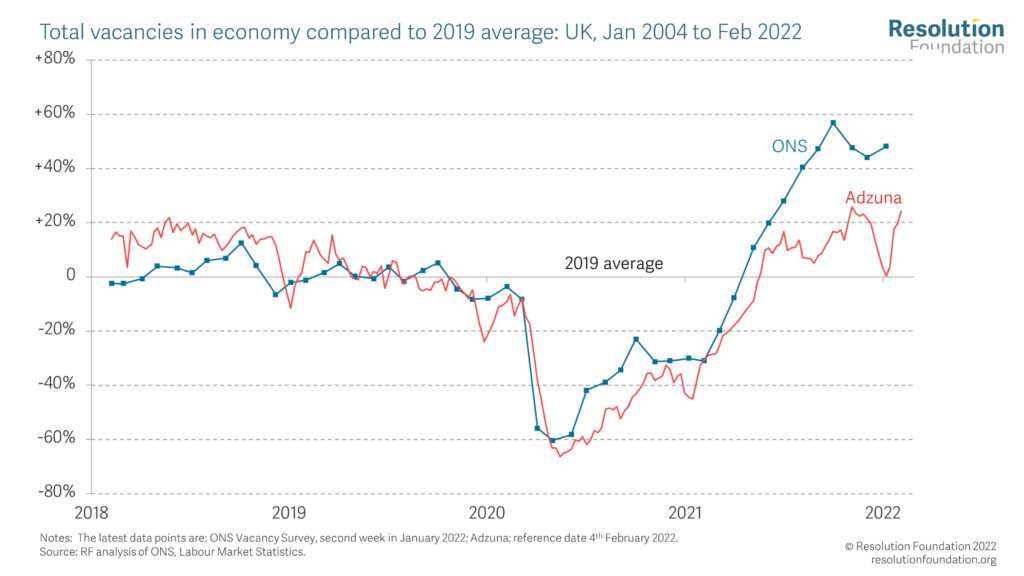 Strong demand for workers continued to drive down unemployment. The single month 16+ unemployment rate fell to 3.9 per cent in December (the headline three-month rate was 4.1 per cent), marking the return of unemployment to pre-crisis levels. Which, of course, were low by historical standards. This means that only three months after the end of the furlough scheme, and despite the presence of a new and highly infectious variant, unemployment in December was only slightly above its lowest ever recorded level. There was also some good news in the fact that the headline inactivity rate fell somewhat in December, from 21.5 to 20.9 per cent, in the single month data. This may be an early sign that a strong labour market is tempting some workers back into the workforce. However, we’ll need to see repeats of such falls to make serious inroads into the higher levels of inactivity Covid has left us with. And some of the increase in inactivity may prove long-lasting – Tony Wilson has highlighted that inactivity continues to rise among older workers, with ill health an important driver. 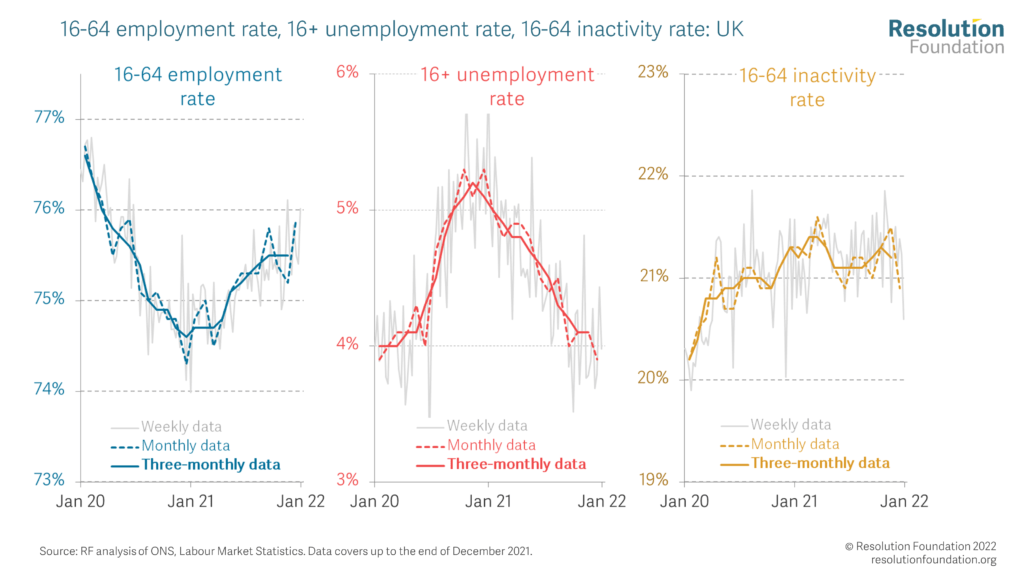 Elevated inactivity means we’re some way yet from a complete employment recovery. Total employment in the three months to December 2021 was 588,000 down (-1.7%) on the three months to February 2020 (in the single-month employment data, the gap is smaller, at -347,000 and -1.1 per cent). More positively, when it comes to charting the recovery from the crisis, the total number of hours worked in December had returned to its pre-crisis level. The reason we have passed this milestone with employment still below pre-crisis levels is because the working week has become longer – the average number of hours worked per week in December 2021 (32.0) was 1.1 per cent above its February 2020 level (31.7). 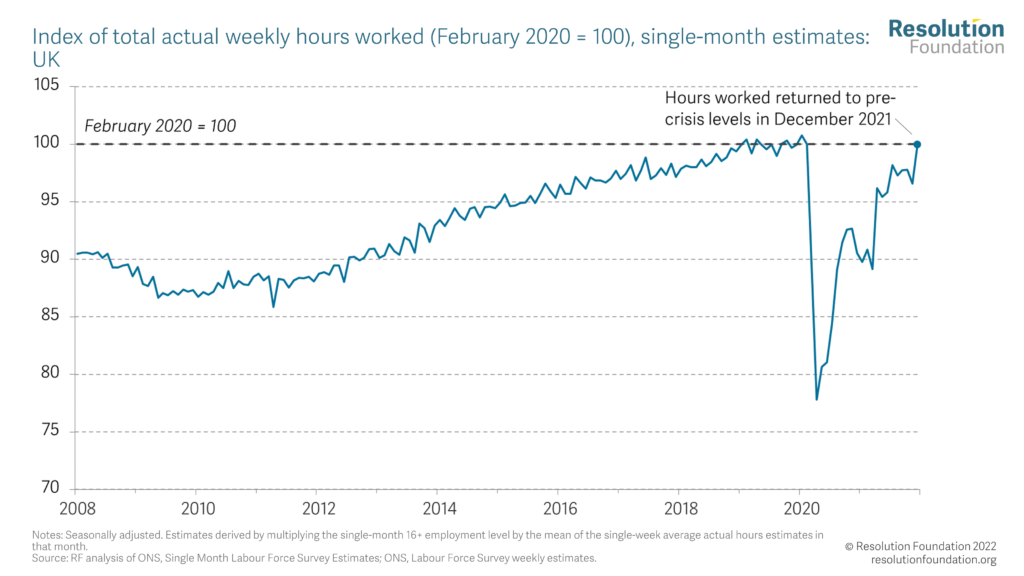 The labour market is both tight and tightening

High demand for workers (as seen in the large number of vacancies), and a fall in labour supply (as seen in elevated inactivity) has produced a tight labour market. Three commonly-used measures of labour market tightness are the unemployment rate, the unemployment/vacancy ratio, and the proportion of workers who are voluntarily quitting their jobs. The chart below (based on Jason Furman’s chart for the US) plots all three of these measures (all normalised, and the sign of the voluntary job moves series flipped). They all point to a tight labour market by historical standards. Two of these measures (unemployment, and the U/V ratio) point to continued tightening, while the quit rate (the share of workers making voluntary job moves) remains high but dipped slightly in the latest data. 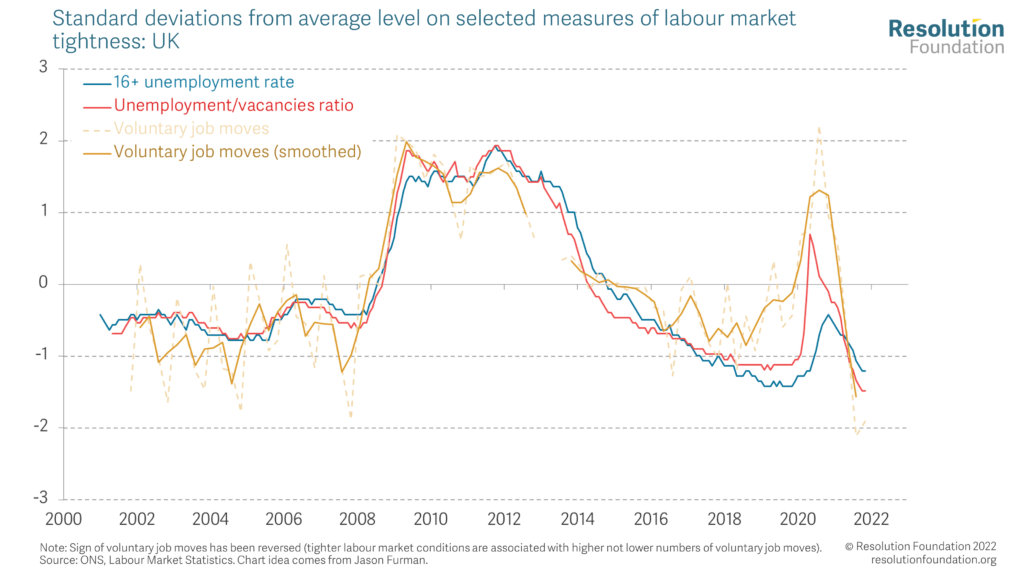 There are tentative signs of strengthening pay growth, but not enough to keep pace with inflation

We would normally expect a tight labour market to feed into stronger pay growth for workers.  There is some early hint of this happening in HMRC’s PAYE data, where annual growth in average monthly pay reached 5.6 per cent in December, marking two months of rising pay growth. The more timely median monthly pay growth figure reached 6.3 per cent in January. Other pay data don’t show quite the same improvement, notably growth in three-month regular Average Weekly Pay figure was just 3.7 per cent in December. But we need to be careful about which pay measures we use. The single month figure for regular AWE growth was up in December. And the growth of total Average Weekly Pay (which includes bonuses, and is a closer measure to the average monthly PAYE figure) also rose in December, to 4.9 per cent in the single-month data. 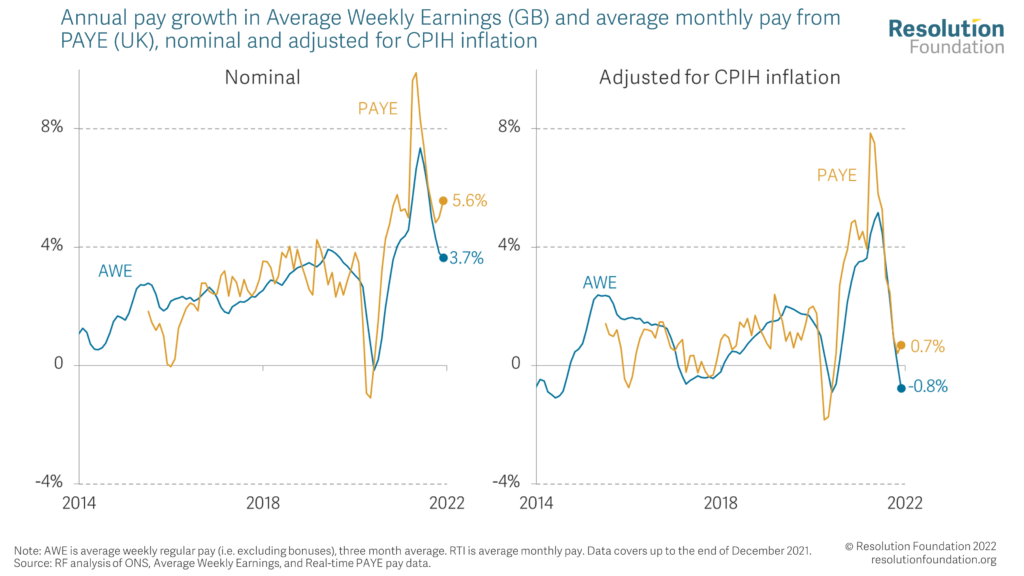 So there are some tentative signs of wage growth improving in response to a tightening labour market. But the paradox of pay in 2022 is that, although nominal pay growth may be high enough to worry the Bank of England (nominal pay growth is well above productivity growth plus 2%, a rate that, if sustained, would contribute to above-target inflation), wages aren’t keeping pace with prices, which means workers are facing a real-terms pay squeeze. Adjusted for CPIH inflation, growth in regular Average Weekly Pay was -0.8 per cent in December. With inflation expected to rise further this year, not least from the huge increase in the energy price cap, the pay squeeze is set to deepen.