The ramping up of restrictions is getting very real today – Wales is in hard lockdown and post-row Greater Manchester has entered tier 3. South Yorkshire has got less than eight hours left before it follows suit. All of which shows why the Chancellor was right to basically totally reinvent his Job Support Scheme yesterday – see this week’s chart (or read our full analysis) for the details

Have a great weekend – and if the reads below don’t get you through the half term I’ve also got a new long read that I did for the folks at Tortoise, looking back at who has been affected by the last 8 months of trauma and ahead to what’s to come.

Crisis economics. First up is a speech from the Bank of England’s Gertjan Vlieghe which is 1) great and b) very accessible (as econ chat goes). I’m biased, given I agree with almost every word of it, but seriously you should have a read. There’s a clear summary of why you can’t wish our economic problems away by lifting lockdowns ie we won’t go and spend while the virus is raging (for more see Simon Wren-Lewis’ excellent new blog). And there’s a great illustration (chart 8) of something TOTCs is always banging on about: the uniquely sectorally unequal nature of this current crisis. This matters hugely for policy because, as Jan says, “we are really not all in this together”. It means targeted fiscal policy is centre stage, and it should make us very conscious that if the economy cannot absorb those exiting shrinking sectors high unemployment will be the result (which is why the change of course on the Job Support Scheme yesterday was so crucial).

Weathering the storm. Some good news! Along with everyone else I’ve been counting my lucky stars that our hard lockdown happened at a time when the sun was shining, and not exactly looking forward to restrictions ramping back up in darker/colder winter months. But it turns out I’m worrying over nothing. That’s the conclusion from new research that finds bad weather (temperature and rainfall) during the previous lockdown did not have the effect I expected of making the negative impact on our wellbeing of lockdown even worse. It did however stop us going to the park… I think this is meant to be an argument that more Netflix less exercise is something we can live with.

Bubbly housing. You’ll have noticed lots of media coverage about a mini-housing boom going on. For that to happen some of you must have been buying houses over the summer. Stop it.  Obviously its not for me to offer financial advice. But it is TOTCs job to share interesting research (older free version) that is in no way relevant to what is currently going on. Examining the US housing boom and bust of the 2000s, the authors find that we’re all sheep when it comes to investing ie jumping on a bandwagon if we see our neighbours doing so (specifically if a very near neighbour invests in housing then the chance that we do over the following three years rises by 20 percent). Oh and sheep get burnt: those investing in this way ended up buying at higher prices, selling at lower ones, losing more capital and being more likely to default.

Ofsted economics.  Most countries’ fiscal rules have, like our dreams for Christmas, been blown up by this crisis.  So have the ones the EU applies to member states (e.g the 3 per cent deficit limit). These are suspended until the end of 2021 given that…. everyone is breaking them. A debate is brewing on what comes next. This week saw calls for ‘fiscal standards’ to replace numerical fiscal rules. The basic argument is very similar to that for Ofsted ratings for schools rather than exam results ie in reality a lot of factors affect whether a country has sustainable public finances (e.g growth rates, interest rates and ability to bring more tax/cut spending if needed). The authors view = while the idea of fiscal rules has the advantage of clarity, in practice trying to write down rules that are ‘right’ and cope with all that complexity is a “fool’s errand”. Instead they want a data informed qualitative assessment where we are continuously assessing whether a country has sustainable public finances. Is that possible? Well it puts much more pressure on the institution doing that assessing and at a country level I’m not in favour of it for the UK, but it’s not impossible. New Zealand (suddenly everyone’s favourite country) has been kind of at it for some time.

Turkey divided.  Best not to talk about Christmas, but we can still have some Turkey chat. Since regional divides are back in the news this week, it’s worth remembering it’s not just us that has this problem. Have a read of new research examining geography challenges in Turkey. To spice things up their gap is East/West rather than the North/South we’re used to. Given the lack of lots of historical data, the authors use a novel dataset to show that regional disparities peaked in 1950, after rising since 1880, and have since fallen. As with fiscal rules, this is complex stuff with the causes spread amongst proximity to Europe, urbanisation, and demographic shifts. The good news though is it shows divided countries can see gaps close. The bad news? Even if they close somewhat, income/output gaps are often still very large.

Policy making is about priorities (even if your stated policy is to have the cake and eat it). Focusing on the right problem is often as important as getting the right answer. The big row this month over the Job Support Scheme (JSS) is a classic case study. This policy replaces the Job Retention Scheme (JRS) on 1 November, providing workers with 67% of their previous earnings for hours they don’t work (compared to 80% on the JRS). As a result most criticism of the scheme, particularly from Labour politicians, has been focused on this reduction in generosity. But when the Chancellor stood up to tweak reinvent the JSS yesterday he left two-thirds replacement untouched. Why? Because far and away the biggest problem wasn’t that those benefitting from it would get slightly less money, but that not enough people would benefit from it at all. That’s because a key feature of the JSS was that firms wanting to use it were asked to make a big contribution towards its costs for the hours when their employees would not be working. The result would have been low take-up = higher unemployment. And unemployment means much bigger income falls because, as COTW shows, it’s those losing work and relying on benefits that are by far the worst hit. The gap between any version of the JSS/JRS and unemployment benefits is huge compared to the gaps between the JSS and JRS (which for lower income families are very small). Good policy, like life, is about deciding what’s most important. 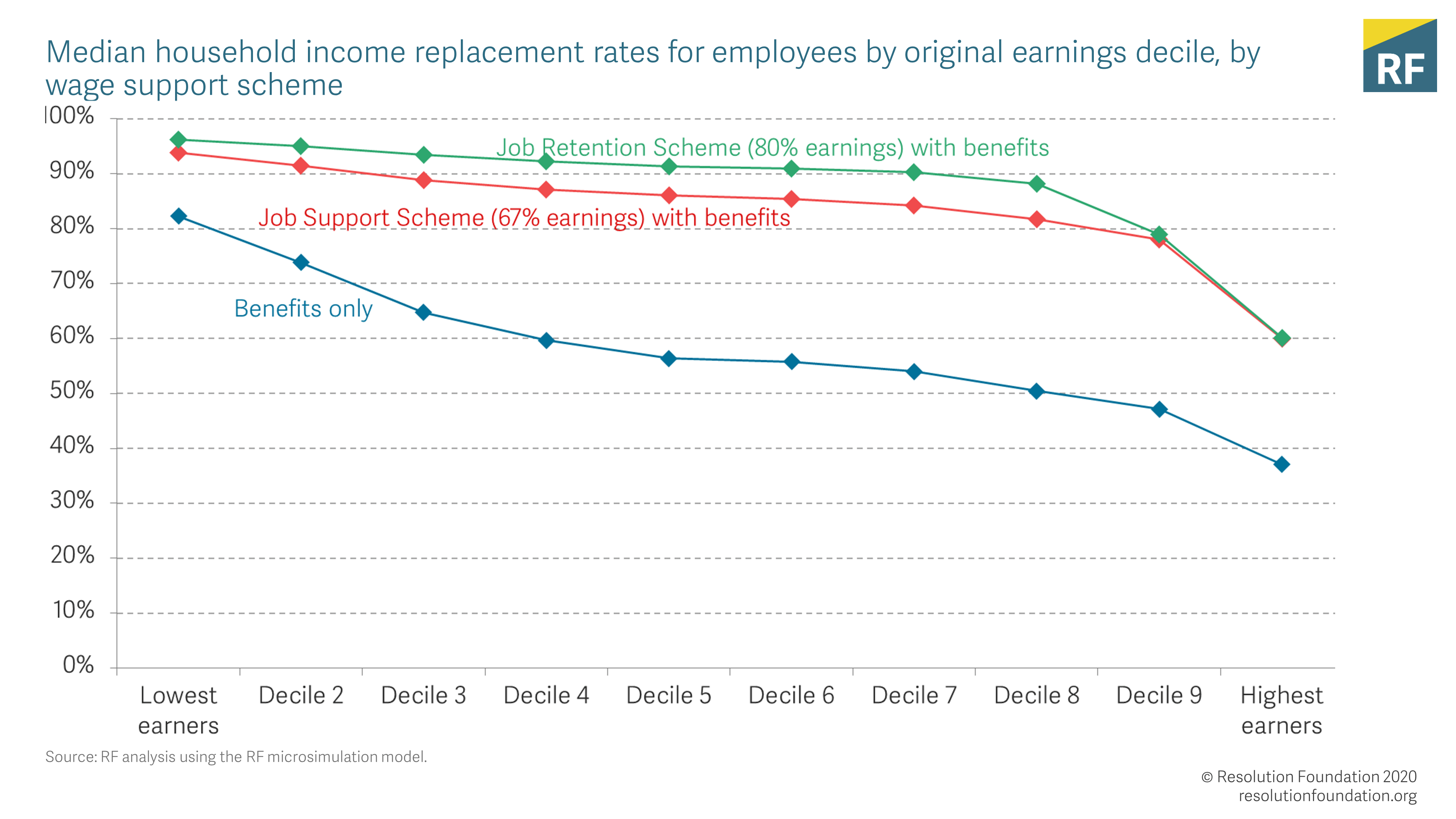