Although the UK enjoyed some glorious weather this month, the Met Office recently predicted cooler temperatures and gloomy skies in the immediate days ahead. Given the time of year, this isn’t all that surprising, but deep down you can’t help but be disappointed: the dullness of dreary weather can cause days to blend into each other until some larger front appears on the horizon. Whether that front is for better or worse is unclear.

Now, some might say that linking the weather to apprenticeship numbers, for which we have new data today, is as tortured as analogies come. Let’s go with it anyway: as with previous months, the number of recent apprenticeship starts is certainly downcast but is not cascading into a month-on-month decline. It remains unclear when and in what direction conditions will change but one thing is for certain: the current atmosphere is certainly different from the (relatively) recent past.

Figures published today detail the number and type of apprenticeships started in July 2018, which marks the conclusion of 2017/18, the first full academic year since the apprenticeship levy and its wider reforms came into force. How did it go? Well first, it’s been dreary: as with previous months, provisional figures show that the number people who started an apprenticeship this July (25,300) was up (20%) on July 2017 (just two months after the levy came in), but down when compared to the same time in previous years (-43% compared to July 2016, for example). 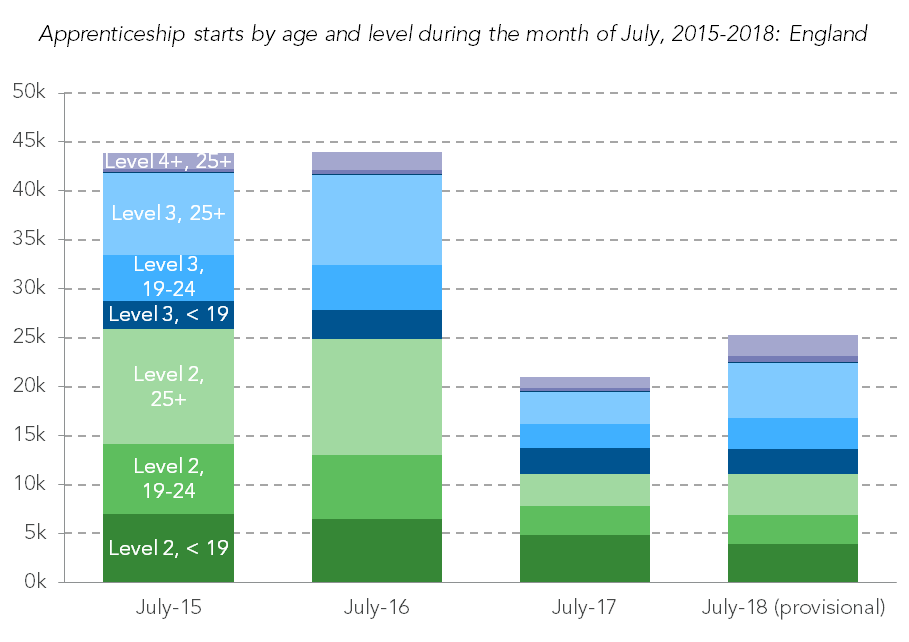 Looking at the 2017/18 academic year in its entirety, we see that there were fewer starts (-25%) than the year before (370,000 in 2017/18, compared to 495,000 in 2016/17). Despite the dreary start numbers, however, different types of apprenticeships have moved in different directions. Specifically, we see a large drop in starts taken up by older apprentices at lower-levels and a rise in the number taken up by those aged 19-24 at higher levels, albeit from a lower base. For example, there was a 53% fall in starts at Level 2 among those aged 25+, compared to a 78% increase in starts at Level 4+ among 19-24 year olds. 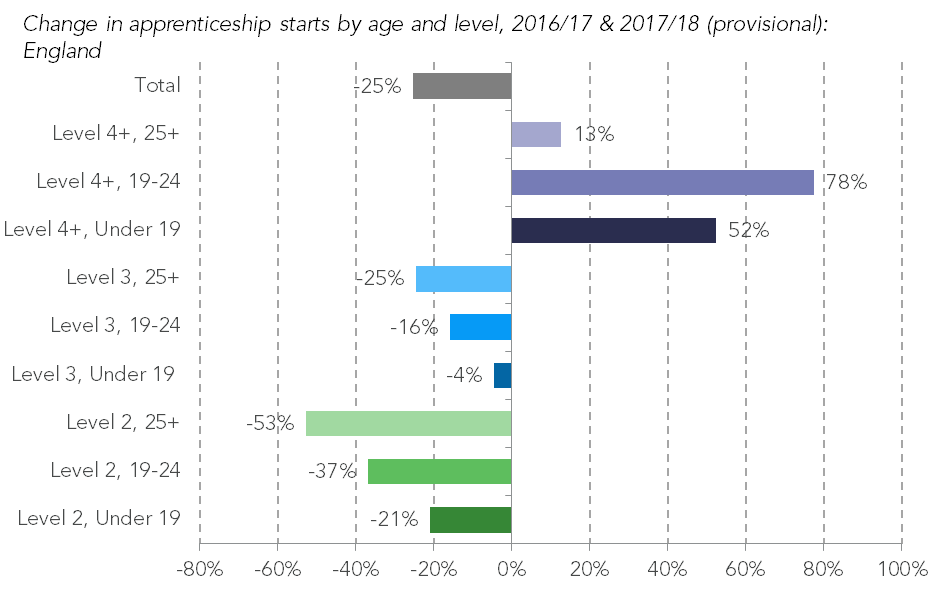 How long-lasting are these changes? The forecast is, unhelpfully, unclear. While we know that some of the past year’s fall in starts has been driven by a backlog in the number of approved apprenticeship standards coming online, as well as wider regulatory changes like an increase in training requirements, we don’t yet know how employers will react to the levy system over its second year. This includes uncertainty over the number of small and medium-sized firms (who sit outside the levy system) that will be able to train apprentices, and over whether the apprenticeships funded by larger levy-paying firms will differ drastically from those smaller employers who don’t pay in.

This year, non-levy payers funded more apprenticeship starts than those who paid into the system: there were 189,900 starts among non-levy-paying firms compared to 180,000 starts among levy payers. It’s unclear how long this pattern will persist, particularly if levy payers concentrate their funding into expensive apprenticeships and leave little cash leftover to help fund training subsidies for those businesses outside the levy. In comparison to their non-levy counterparts, firms that pay into the levy do indeed appear to fund a larger share of apprenticeships at advanced and higher levels. In 2017/18, 17% of levy-funded starts were at Level 4+, compared to 8% of non-levy funded starts. However, we’ve not (yet, anyway) reached a scenario where levy funding is exclusively channelled into high-cost programmes like MBAs or engineering degree apprenticeships. 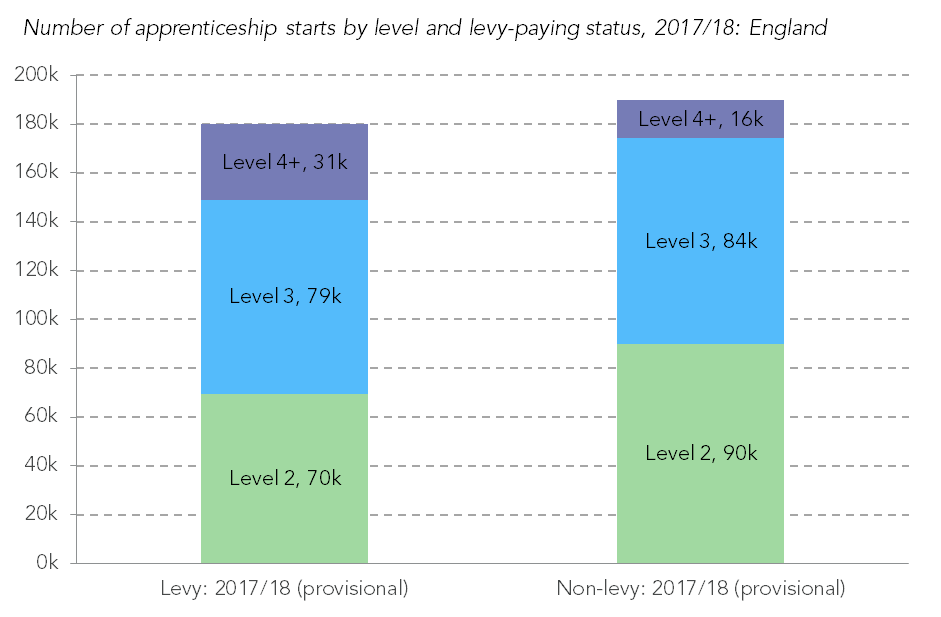 And while so much of the discussion revolves around the link between apprenticeship rules and business requirements, it’s worth asking how the system – and the type of apprenticeships it encourages – affects learners. While the overall number of new apprentices is down, the sectors that have grown (as a proportion of the total system) since the levy came into place tend to be in programmes at higher levels, some of which (like Level 4+ business and Level 3 engineering) lead to higher median annual earnings. Those whose eventual pay tends to rank in the middle have, for the most part, held flat as a share of all starts, while some of those with lower-than-average earnings (i.e. Level 2 retail, business, and health and care) have fallen slightly. 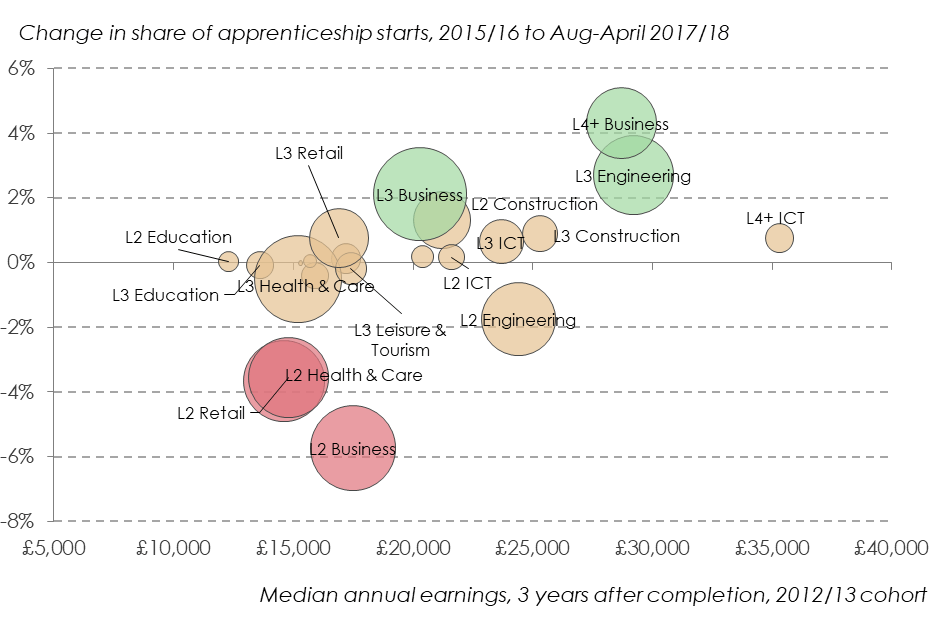 While it’s course worth celebrating growth in apprenticeships that lead to good employment outcomes, we also need to be cautious about encouraging a system that limits its opportunities to those who already have higher-level qualifications or who might have benefited from higher education-level courses anyway.

For many, it’s been a rather a desolate year for apprenticeships – time will tell whether, or indeed when, a new front will appear on the horizon.

This blog was originally published on TES.com

Up to the job? Using the Apprenticeship Levy to tackle the UK’s post-16 education divide
28 October 2018
·
Kathleen Henehan