Now this really does need to be the last one. We just can’t keep going at a rate of one a week. I’m so tired I can hardly see, which is why this week’s TOTCs isn’t exactly on time.

The problem of course is the policy chaos/u-turn spiral driving fiscal event frequency inflation this Autumn, rather than TOTCs regularity. And it needs to stop. Not just so a few more people in SW1A can get a nap, but because it’s a recipe for policy lurches and mistakes. So if Jeremy Hunt achieved nothing else yesterday, I hope it’s to make British economic policy making normal again. No-one wants to see an OBR forecast, a red box or a Treasury scorecard until March at the earliest. This is all I want, and Britain deserves, for Christmas.

But the Autumn Statement has happened, the Resolution team has done their usual outstanding job analysing what it all means, so TOTCs needs to step up too. Below is our Autumn Statement special, cantering through the key things you need to know. Warning: this one’s only for those with a robust constitution.

P.S. if you want some light relief from all this, I’m giving the Campaign for Social Sciences Annual Lecture on Monday on… the cost of living crisis. It’s online – details here.

My one sentence summary of the Autumn Statement is that Jeremy Hunt combined the ‘tough choices’ rhetoric of George Osborne with the policies of Gordon Brown. He crammed in nine references to “difficult decisions” in his speech yesterday, before unleashing his inner Brownite, announcing more energy support today, stealth tax rises for the middle and top, and far less concrete spending cuts pencilled in for after the next election.

Energy prices are tanking the economy….

Why was he bothering with all of this? Partly to take down the ‘fiscal freakshow’ sign Liz Truss hung round the UK’S neck, but mainly because of some grim economic, and grimmer fiscal forecasts from the OBR.

On the former, the UK’s entering a recession (as will most of Europe be shortly). That’s what surging gas prices do to an energy importer like the UK – mullering consumers ability to spend and raising the costs of production so some chunks of economic activity are just no longer profitable is why GDP falls when energy prices surge like this.

Let’s start with the good news for the optimists out there (if there are any of you left): the OBR is actually forecasting a shallower recession than any seen in recent economic history, as our first chart shows. And, unlike the Bank of England, they think there might even be a recovery from it. Which is nice (if you don’t mind waiting til 2024). 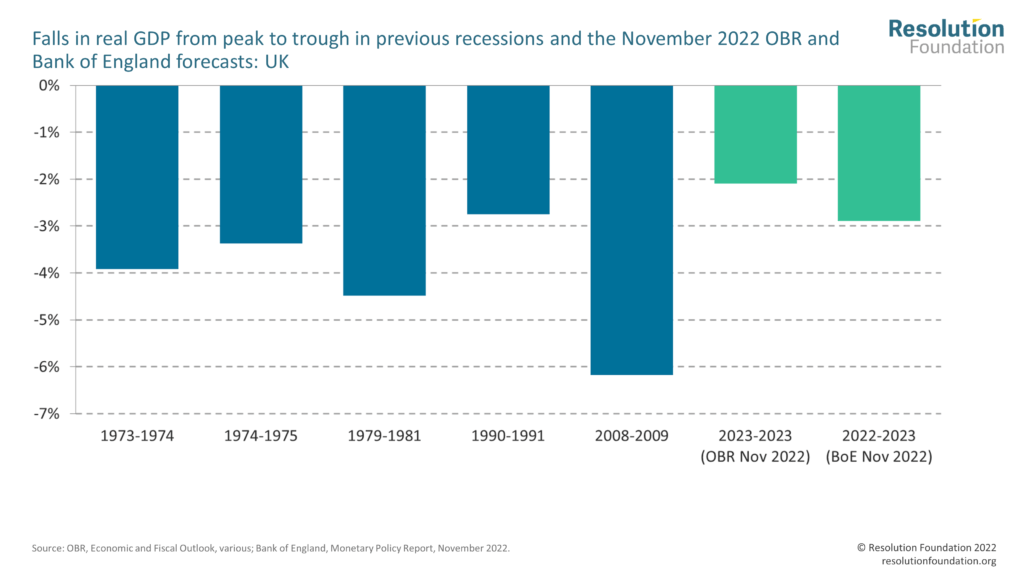 The pessimists amongst you might note that the fact that a recession that shallow hasn’t happened in recent economic history isn’t all good news… And even on this basis we’re talking about unemployment rising by 500,000 and the economy being no bigger at the end of this parliament than its start – the first time that has happened in 40 years (Conservative MPs needing a pick-me up might note that was Thatcher’s first term and she still won the 1983 election, although winning the Falklands War may have been necessary to overcome the losing the battle with unemployment side of things).

The fiscal forecasts are if anything even bleaker than the economic ones. Why? Because slow growth isn’t the only thing pushing up borrowing: in fact rising interest rates are doing most of the damage. While these aren’t matching the post mini-budget high, they are still up by 200 to 300 per cent this year (see our second chart). 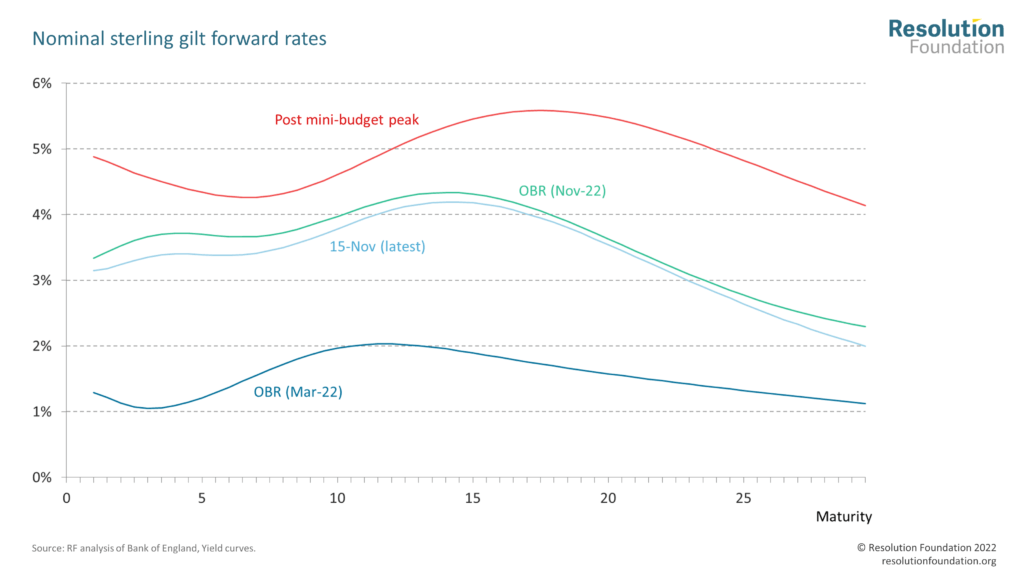 This really matters because it costs the Treasury an extra £43bn a year on average over the next four years. Remember a key reason we’ve managed to increase spending on the likes of health in recent decades without big tax rises is that debt interest spending has been falling decade on decade. Well that particularly magic money tree is looking dead and buried.

Add higher interest rates to lower growth and economic changes push up borrowing by £270 billion cumulatively over the coming five years compared to what was expected back March. That’s the Chancellor’s economic and fiscal inheritance, but how did he respond to it?

A chillaxed Chancellor on debt

Hunt has spent the last six weeks talking calmly and orthodoxly about the need for sustainable public finances. Why? So markets wouldn’t bat an eyelid when he let debt take the strain. His policy choices are to do precisely nothing to offset higher borrowing before 2025-26, in fact increasing borrowing in the near term (for energy related support). Even by 2026-27 he’s only used policy (spending cuts we’ll come back to) to offset one third of the rise in borrowing. 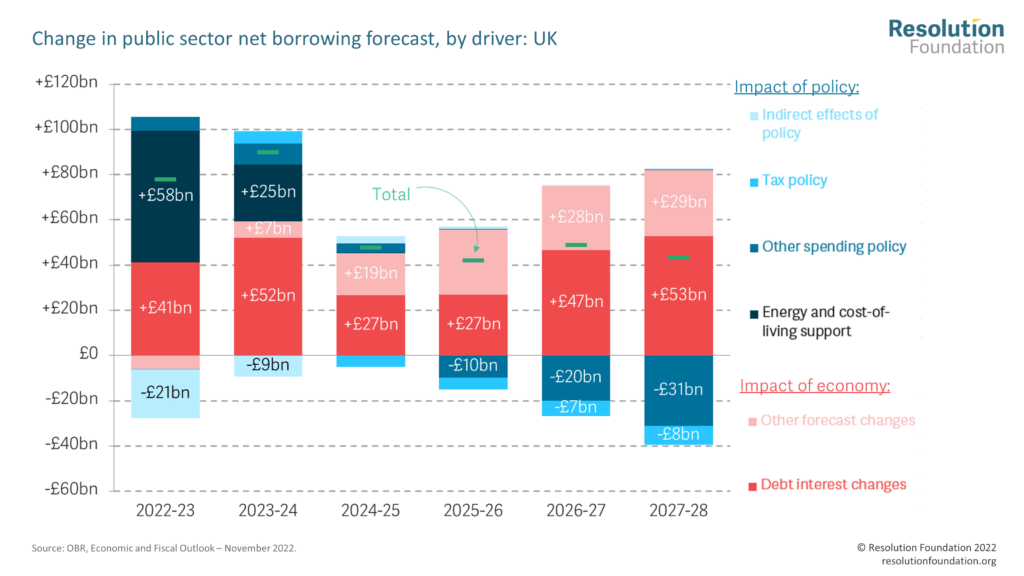 Unless gas prices fall a lot, next year is going to feel really, really tough. Yes the Chancellor might be accepting another debt hike, but he has tried to start weaning households off the level of energy bill help they are receiving this winter with significant but smaller support next year. 2023-24 will see a slightly more generous repeat of Sunak’s lump-sum Cost of Living Payments for vulnerable groups,  combined with a less generous form of Truss’ Energy Price Guarantee (now only capping the typical bill at £3,000 from next April) and the end of other fully or near universal support (think the £400 bill reductions or council tax rebate). The result is a much less generous (down 61 per cent next year from this), but more progressive (two thirds goes to the poorest half of households vs half this year) as our next chart spells out. 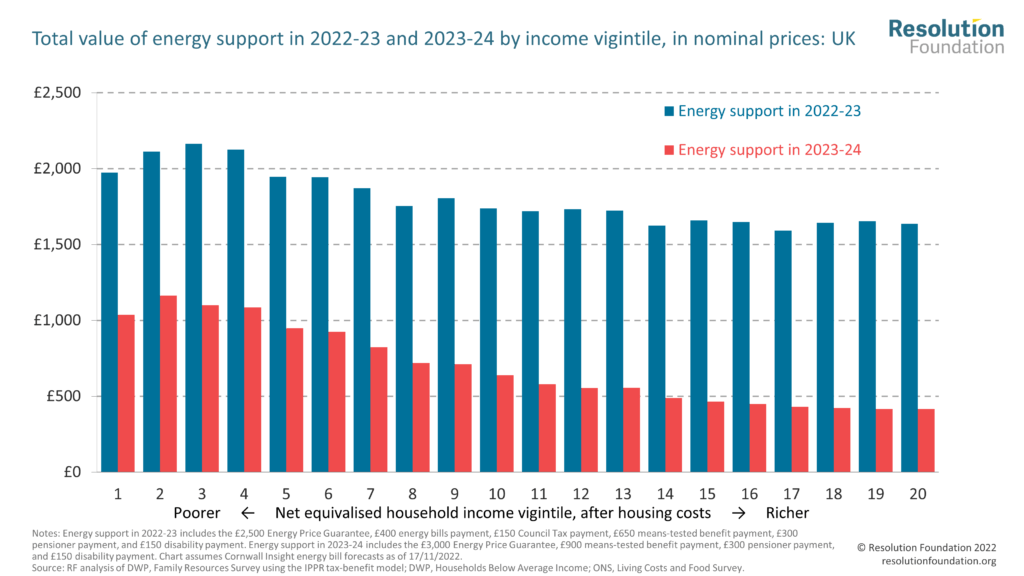 Where will this leave households? Seeing their incomes being demolished by rising energy prices. Around one-in-eight families (3.3 million) will be paying over £2,000 more next year than they were in 2021-22 for energy, while the OBR expects household incomes to fall by just over 7 per cent over this year and next –the equivalent of £1,700 per household. When the country’s getting poorer importing gas costing gazillions , you can be borrowing billions more and still getting no feel good factor for your trouble.

Return of the Squeezed middle

The Chancellor announced some chunky tax rises, but is overseeing bigger ones inherited from his boss’ time in No11. The big one is freezing almost every threshold in the tax system, for year after year after year. Now this is progressive, with higher-income households generally facing higher tax hikes. New smaller measures to reduce the amount you can benefit from capital gains or dividends before paying tax, and reducing the threshold for the 45p rate of income tax to almost £125,000, are even more so: 70 per cent of the new taxes rises for individuals announced yesterday will be paid by the top fifth. So far, so Robin Hood.

However, there’s a notable “squeezed middle” angle to the changes. A typical household will face a permanent 3.7% income hit from the rises – the same as the top fifth of households, and bigger than the 3% income hit that the very top twentieth of households will face.

Why? The reliance of stealthy threshold freezes to raise the bulk of the revenue. This kind of tax increase raises the same amount in cash terms from almost every individual effected (see next chart). For example, someone on £62,000 loses as much from threshold freezes as someone on £124,000 in cash terms (£1,600), leading them to lose twice as much as a share of income (2.6 vs 1.3 per cent). 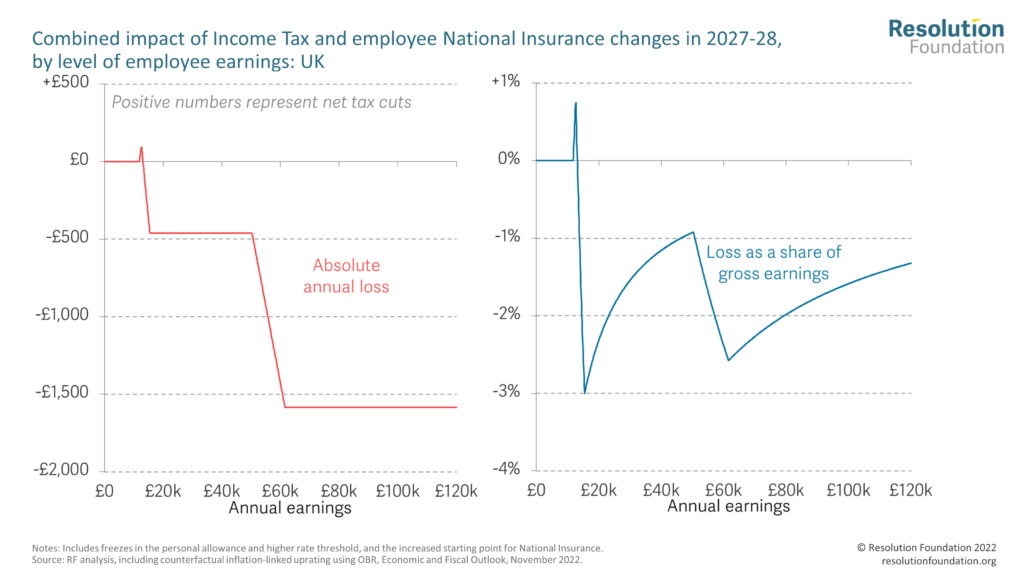 So choosing stealthy fiscal drag via threshold freezes, rather than personal tax rate rises, leaves the middle hard hit as well as the top. That kind of Robin Hood can’t expect to be quite so popular with middle Britain.

The spending cuts announced yesterday largely reverse spending increases previously announced, but overall, Chancellors since the pandemic have raised taxes by 2.3 per cent of GDP (£68 billion or £2,300 per household in 2027-28), including freezing all major tax thresholds during the current period of high inflation and sharply increasing corporation tax. On this basis, the consolidation is entirely driven by tax rises, in sharp contrast to the post-financial crisis fiscal tightening, when almost 80 per cent came from spending cuts.

Tax as a share of GDP is also rising steeply (libertarians: look away now) reaching its highest level since the Second World War (37.5 per cent by 2024-25), while the six-year personal allowance freeze is set to undo around half of Osborne’s flagship increases to it over the 2010s, and will take it back to around its 2013-14 real-terms level. So forget the rhetoric: Osbornomics has been (very) decisively flipped.

Big, but totally non-specific, spending cuts were also pencilled in for beyond the middle of this decade. Unlike George Osborne starting cuts within weeks of entering government in 2010, these are as backloaded as your average middle-age male’s preparations for Christmas. Now some of these may happen, especially the £15bn cut to investment spending. But the £22bn reduction in public service spending by 2027-28 looks bold. As the next chart demonstrates, it would take unprotected departments back to spending power levels of 2014-15, mid-austerity, while delivering it will require holding down pay growth in the public sector below that in the private sector for year after year. Which is difficult given it’s not actually illegal for those in the former to take jobs in the latter. 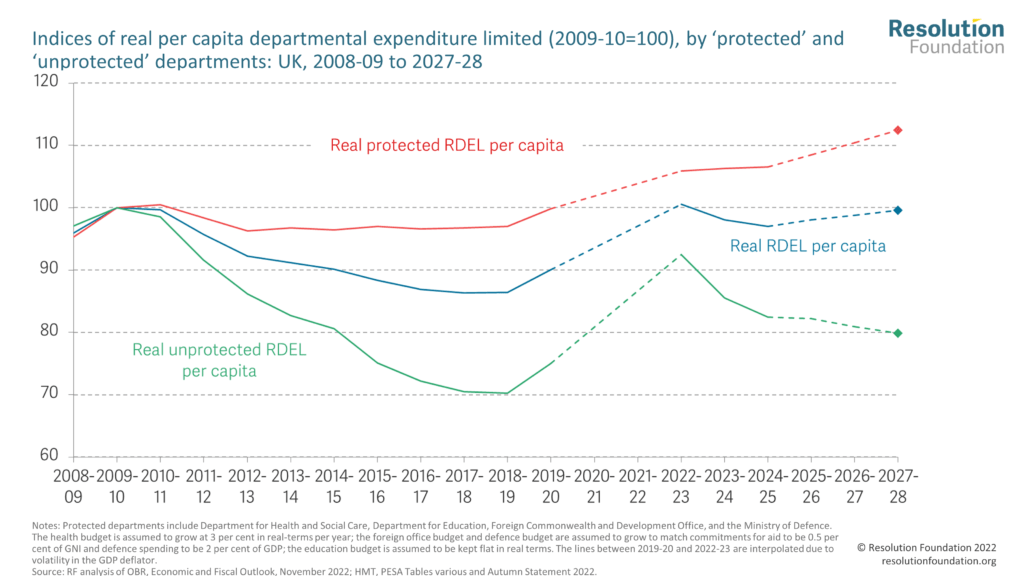 More importantly anyone who has met a public service of almost any type recently knows the truth: it’s much harder cutting spending at the end of a decade of austerity than at its beginning.

Lost amongst the grim headlines yesterday lurks some really good news that I don’t want you to miss so here’s a list of early Christmas presents:

The bad news? Even after these measures our living standards are stuck in a depression. Real disposable incomes are set to be lower at the start of 2028 than before the pandemic hit. The outlook for real wages is even worse, with the value of workers’ pay packets not expected to return to their 2008 level until 2027. This unprecedented 19-year pay downturn has cost workers £15,000 a year compared to a world where their wages had instead continued to grow at their pre-financial crisis rate. Living through that, rather than taking policy decisions, is what is really difficult in 2020s Britain.