I’m hoping today is going to be a calmer day. At a minimum the goal is to get through writing TOTCs without resigning. There’s no special advisers to worry about but the trustees do make us share mugs and spreadsheets in RF towers, which is quite frankly more than any self-respecting policy type can accept. On #sajgate I’m not really interested in the Kremlinology. Either it’s a disaster accidently losing your Chancellor just before a Budget or, if it wasn’t an accident, ridiculous game playing. Neither is what good government is about.

This week’s reads take us from controlling the tech juggernauts and levelling up British scientists, to summaries of the Thomas Piketty new book you might actually be able to read. RF modelling suggests there’s a 78 per cent chance TOTC is more interesting than the average dinner chat on 14th February. So Happy Valentine ’s Day everyone – keep your phones and your loved ones close.

Caring about small fry. Last week we covered the forthcoming review into competition in the UK, but they’re already streets ahead across the pond. The US Federal Trade Commission has demanded information from Google, Amazon, Apple, Facebook and Microsoft on their acquisitions of smaller firms (summary).  The important question they are trying to answer is whether current rules (only requiring reporting of mergers with larger firms) are missing the fact that competition in tech comes from the potential of small start-ups to one day replace the FAANGS. Currently the danger is those challengers can just be bought up before they get going – which is fine for the founders who get loads of $$$ but rubbish for the whole dynamic-economy thing. Oh, and on the subject of where competition for US tech giants comes from, check out this article arguing that the BBC were poised to head off the rise of Netflix by introducing their own streaming service, Kangaroo, but were blocked by the Competition Commission back in 2008.

Researching regions. ‘Levelling up’ is all the rage at the moment. But while trains get all the attention, this thoughtful piece by John Morgan looks at what it might mean for the world of science. Drawing heavily on interesting work by physics professor Richard Jones, the piece argues that Oxford, Cambridge and West London account for 31 per cent of the UK’s R&D spending – and that it wouldn’t hurt to shift the balance away from the south east. He’s not alone either ­– recently departed Science Minister Chris Skidmore was all over the issue in a speech on regional R&D in Durham last week. And of course the reason why it’s relatively easy to level up science spending is because we’re about to start splurging a lot more of it, so everyone can be a winner.

Capital strikes back. Sequels are difficult – especially if your last economics book managed to shift two million copies. But Thomas Piketty is definitely not out of ideas (although is clearly lacking self-control) with his new book ‘Capital and Ideology’ running to 1,232 pages. Its subject = how changing ideologies and political movements shape global inequalities. So nice and simple then. Now, we’ve all got busy lives. So if you can’t stomach the full tome (English version out in March) check out Piketty’s interviews with Martin Sandbu of the FT and Stephanie Flanders of Bloomberg, who have probed the main ideas behind his new work.

Smelling the coffee. The Labour Party is currently engaged in a long therapy session leadership election. But at some point some poor person will have to decide what they actually do differently after the recent election maiming. Lord Ashcroft (whose report in 2005 suggested the Tories might want to make their peace with modern Britain) this week published his ‘Diagnosis of Defeat’ looking at where it all went wrong for Labour back in December. There’s lots of specifics on the Brexit/Jeremy problems, but more substantially this is an argument about Labour not even trying to represent a broad swathe of people. At some level what Labour needs to decide is whether they actually believe in this whole democracy thing – which requires putting moral value on what some other people think and want. And no, they don’t want Putin plus free broadband.

Tyler, meet Tim. What do you get when two leading polymath economists from either side of the Atlantic (Tyler Cowen and Tim Harford)  get together to discuss the art of debate, rethinking economic narratives and Brexit? Lots of good questions and some pretty good answers to. This is a great podcast listen for your commute home – or the website has a transcript if you’re all about the written word.

While #sajgate has slightly thrown the Budget up into the air, one survivor will be the government’s ‘levelling up’ agenda. Which is good because it’s very welcome, irrespective of whether it’s born partly of cold electoral logic – namely the 50 seats across Wales, the Midlands and the North that switched from Conservative to Labour in December. A lot has been said of these ‘Blue Wall’ seats – but with a lot less evidence to back it up. New RF research aims to set the record straight. One particularly emotive claim about the Blue Wall is that people, and the youth in particular, are leaving these towns in droves for London or the big cities nearby. Trouble is, as Chart of the Week shows, it’s not true. Young people are actually far less likely (over 20 per cent) to leave Blue Wall seats than either other Conservative or Labour seats. And note that once we look at all age groups more people are actually moving out of Labour seats than arriving – which is why London loses population to the rest of the country every year, rather than gaining it as everyone claims. And with no-one moving into Blue Wall seats either, it’s a low level of demographic dynamism, not a youth exodus, that marks the Blue Wall out. Policy needs to wrestle with the reality of what this relative stasis means for both the feel and economy of these areas, not the myths that abound. 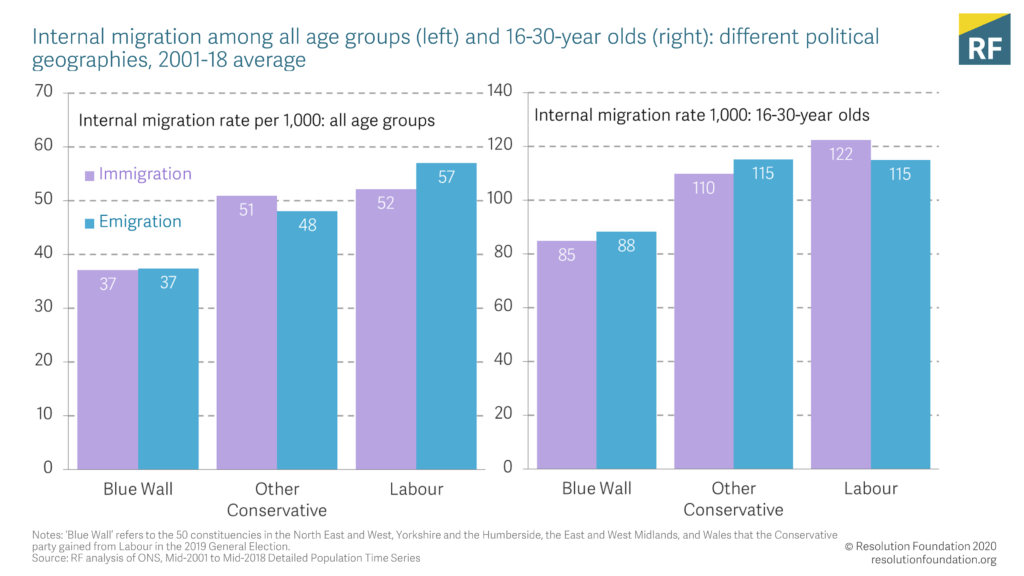