All April Fools gags are rubbish, but today’s combination of temperatures plummeting as energy bills surge might be the worst yet. A new Resolution Foundation note shows the number of households in fuel stress (spending at least 10 per cent of their budgets on energy) will double to five million as a result of today’s energy price cap rise – and another 2.5 million are at risk if the cap rises again in October to £2,500.

But it’s important not to get fatalistic in the face of these grim numbers. In fact this week has also provided concrete evidence that policy can make a big difference. The National Living Wage is up 6.6 per cent today (see COTW) – driving low pay down to its lowest levels for four decades. And earlier in the week we got data on what happened to household incomes during the depths of the pandemic (2020-21). Rishi Sunak’s policy moves (furlough + benefit increases) protected household incomes (typical income fell just 1 per cent) from the huge hit to GDP (down 10 per cent) but also cut inequality and poverty (relative poverty fell from 22 to 20 per cent). To make that concrete: the £20 temporary uplift to Universal Credit saw a big reduction in households on UC going without food. So, while policy isn’t pulling its weight in the current crisis we face, let’s remember how much it can matter.

Have a great, if cold, weekend.

Amusing academics. Science is a serious business. Obviously. But we’re all human, and it turns out funny titles to academic articles actually help boost their reach. So conclude researchers who evaluated the ‘humour’ of almost 2,500 ecology/evolution papers’ titles, and examined whether that had any impact on number of citations. Overall funnier titles didn’t get more citations, but that’s because authors are more likely to use funny titles for papers they themselves think are less important (judged by how often they cite the papers themselves). Using these self-citations as a proxy for paper quality, the researchers show that funnier titles do lead to more citations all else equal. The Resolution team are going to take this as total vindication given I’m always moaning about them seeming to spend days dreaming up titles for their papers. The conclusion? April Fools day is rubbish, but humour is not.

Business Administration Extraction. Why are workers’ wages rubbish? A new paper (free) provides evidence that (just like everything bad in the world) business schools are to blame. Data from the US and Denmark, shows that over five years following the appointment of a manager with a business degree, wages get hit by 6/3 per cent in the US/Denmark respectively. This didn’t have anything to do with firm performance – CEOs with an MBA or business degree were just less likely to share firm profits with workers. The authors argue that this isn’t because people who go to business school are hard-nosed by nature, but the result of the ideas they are taught there. Turns out a little education is a very dangerous thing.

Benefits burden. Universal Credit set out to reduce the stress of claiming benefits by merging six benefits into one. Problems with the initial wait for a first payment and frequency of future payments are well documented, while the new benefit increased incomes for some while reducing them for others. Great research (authors include Resolution’s very own Mike Brewer) shows this had real effects: the negative mental health impact of becoming unemployed was greater under UC than the legacy benefits it replaced for single adults and lone parents, but not those in couples. Why? These groups had less ability to fall back on other income sources (i.e. a partner’s job), lost out income-wise and so were more likely to fall behind on paying bills. They were also more likely to exit the welfare system without gaining a job, possibly reflecting increased job search pressure. Welfare policy design really matters for welfare policy’s impacts.

Past pay. You thought we were done plugging the extra-curriculars of Foundation staff? Think again because this fantastic three part radio documentary on the history of pay in the UK (featuring our very own Gavin Kelly) is definitely worth your time. It starts in 1947 when energy and labour shortages (sound familiar?) forced the government to turn to incomes policy to prevent inflation taking hold, before moving onto the Winter of Discontent and the 1980s boom that saw pay at the top accelerate away from the rest of us. The final episode won’t be news for those of you familiar with the Foundation’s back catalogue, covering the stagnation of 2010s and what Covid/the cost of living squeeze could mean for the future.

Productive post. Some fun economic history here, reminding us having an effective state is important for economic growth. I leave it to you to decide whether that bodes well for our current economic prospects… Before the interweb, you may recall, we used the post for more than Amazon deliveries. In fact in the late 19th Century we used it for basically everything. A recent paper (free) shows that as a result ensuring it was efficient really mattered. Reforms of the US Postal Service back then involved merit-based hiring and protection from politically motivated removal. The result? Big falls in delivery errors and a higher volume of mail passing through the system. The growth link is that a better postal system encouraged communications between inventors/firms in different cities – so patenting, not just posting, actually went up post-reform.

Lots of things are going up today – energy prices and council tax bills included. For Britain’s two million lowest earners, their wages are also on the list – rising a hefty 6.6 per cent as a result of the National Living Wage increase to £9.50 today. This is a far bigger pay rise than most of us will get – average earnings are forecast to rise by 5.3 per cent this year while civil servants are getting up to 2 per cent. As Chart of the Week shows, it’s the fifth biggest nominal increase in the 23-year history of the minimum wage. But the rate was set last Autumn when inflation was expected to be around 4 per cent. Much faster price rises that are now materialising mean the NLW is actually set to fall in real-terms by around 1 per cent. So one of the biggest ever cash rises will translate into the third biggest real-terms fall in the minimum wage’s history. That of course shouldn’t detract from the policy’s success: in a world where everyone likes to say everything is world-beating, the UK’s target for a minimum wage equal to two thirds of typical earnings by 2024 will push it towards the top of the OECD pack. We’ll probably be overtaking the French – prompting identity crises on both sides of the Channel. 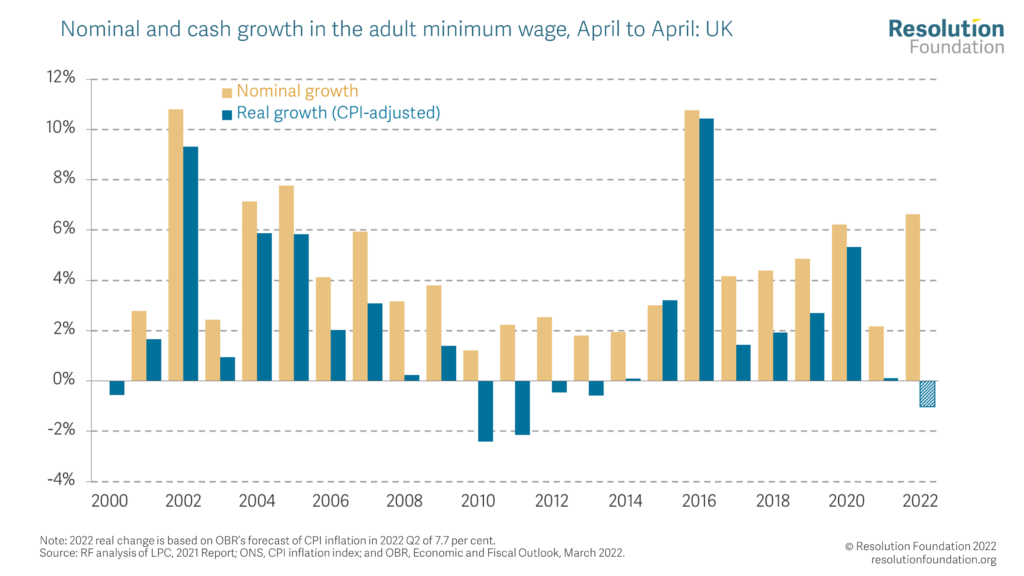