Benefit take-up rates matter. A lot. If households aren’t actually receiving the benefits that government policy entitles them to, their incomes will be lower and the social safety net will not work as intended. The government’s own estimates of benefits take-up suggest that billions of pounds worth of benefits probably go unclaimed each year.

Take-up is a particularly important issue at the moment because it is a key justification for the move to Universal Credit (UC), with the simpler benefit system hopefully increasing take-up. Whether it does or not will help determine if UC is more or less generous than the benefit system it is replacing.

To know how we are doing on take up, or how to boost it, we need good statistics. But that is not what we have today. Indeed we are concerned that the existing data, such as the latest benefit take-up statistics from HM Revenue & Customs, contain significant inaccuracies. The government should review the production of these statistics across all departments – as part of a wider shift to target the increased benefit take-up that Universal Credit was in part designed to deliver.

For many benefits, take-up rates are simply not known

Take-up rates refer to the proportion of eligible recipients who actually get a benefit (caseload take-up), or the proportion of potential cash that is actually received (expenditure take-up). They are not easy to estimate, as the social security system is by definition unaware of people who are not claiming benefits.

That difficulty however does not mean the status quo is a good place to be. Indeed for many benefits, there are no take-up estimates at all. These include Disability Living Allowance and Personal Independence Payments, Attendance Allowance and Carer’s Allowance (though unofficially, an estimated £1.3 billion of Carer’s Allowance goes unclaimed). Jobseeker’s Allowance (JSA) statistics are no longer published at all. And no estimates have been made for Council Tax Benefit (or the local Council Tax Support schemes that replaced it in 2013) since 2009-10.

Other take-up statistics, like Child Benefit, are of little help (or indeed meaning) because they have not kept pace with policy change. HMRC suggests that 4 per cent of eligible children were not getting the benefit in 2011-12, and that this has now risen to 7 per cent – a potentially concerning rise. But we should note that Child Benefit has been means-tested since 2013 while the calculation of take-up rate still includes families who don’t actually receive any money due to their high income as being potential recipients. Many high-income parents will simply have stopped registering with HMRC and if that has driven the fall in Child Benefit take-up it should not overly concern us (except for non-working partners who need to claim to get State Pension credits).

Even for the benefits whose take-up the government does officially estimate, there are significant problems.

We think the official statistics from HMRC – on Tax Credits and Child Benefit – are systematically underestimating take-up due to their methodology. How can this be so? Consider the formula that they use to calculate take-up:

The actual caseload is easy for the government to know. But they can only estimate the number of people who are entitled to but not receiving benefits, using a household survey – the Family Resources Survey (FRS) – together with a model of the benefits that survey respondents are entitled to.

There is strong evidence that people’s responses to the FRS (and all other surveys) are imperfect. Indeed, Resolution Foundation research this summer showed that the cumulative impact of many survey respondents under-reporting the benefits they receive is that the FRS under-estimates total benefit spending by almost £40 billion per year (compared to administrative data). Among other things, this under-reporting of benefit income means that we are overestimating child poverty levels, and underestimating past (pre-2010) falls in poverty, along with post-2010 increases. It also means we are overestimating the number of entitled non-recipients of benefits, leading to incorrectly low take-up statistics.

Take, for example, HMRC estimates of tax credit take-up. For Child Tax Credits, they say that 81 to 86 per cent of the eligible caseload is taking up their benefits. But we estimate that the FRS understates receipt by almost 800,000 families. If we make a simple adjustment for these incorrect cases (subtracting them from the blue bit of the equation above) then this would push the Child Tax Credit take-up rate much nearer to 100 per cent – though the true figure is very unlikely to be quite this high. An alternative method, dividing the number of families known to receive tax credits by the number eligible according to our tax-benefit model, gives a figure of 93 per cent. So we really don’t know if the number of households entitled to but not receiving Child Tax Credit is as high as one in five (HMRC’s low estimate) or close to zero (our high estimate). 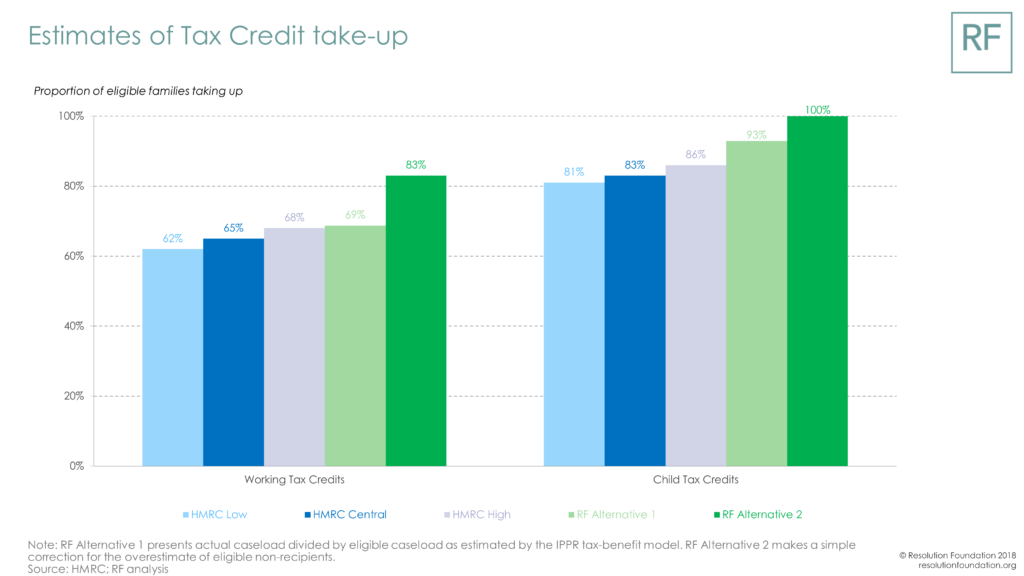 In an ideal world, take-up statistics would be calculated using FRS data that had been 100 per cent corrected for benefit under-reporting using administrative records, rather than treating the survey data as entirely accurate (like HMRC does). This is the sort of adjustment that the DWP’s estimates of take-up gradually began making a decade ago. The latest DWP publication shows caseload take-up rates of 60 per cent for Pension Credit, 80 per cent for Housing Benefit and 84 per cent for Income Support/Income-related Employment and Support Allowance. It checks respondents’ answers against the administrative data on what benefits households actually receive, and corrects individual survey responses where necessary. In the latest release this has only been possible for around 60 per cent of respondents, but in future, theoretically, it should be possible to data-link the vast majority of FRS respondents.

All of this is particularly important for Universal Credit. Perhaps the best argument for the new system is that it will boost take-up by making it harder for families to claim one benefit they are entitled to (like Tax Credits) while not claiming another (like Housing Benefit). According to the Office for Budget Responsibility (OBR), UC will cost around £2 billion more overall in 2023-24 than the benefits it replaces; but this relies on it reducing the amount of unclaimed support by £3.2 billion. This projection raises a couple of questions.

First, are these calculations of UC’s impact on take-up plausible? The existing statistics suggest that over £4 billion of Tax Credits goes unclaimed, and £3 billion of working-age Housing Benefit. If these figures and others are correct then a £3.2 billion take-up boost looks believable. But if (as our calculations suggest) they are greatly overestimated, then it becomes more difficult to imagine. This matters both for the UC Business Case and for the OBR’s public spending forecasts.

Second, how will we know if UC boosts take-up? Eventually there will be good UC take-up estimates, if the DWP manages to make full use of administrative data. But in the (many) years where the legacy benefits and UC will be operating in parallel, it will be extremely difficult to measure take-up rates for either system. The government acknowledged this problem back in 2012, and it explains why DWP currently publish neither JSA nor UC take-up rates. This is both understandable and deeply problematic for anyone interested in measuring the effect of the single biggest reform being implemented this decade in Britain.

The case for moving to Universal Credit partly rests on it increasing benefit take-up – and this is something the government should therefore be actively targeting, along with take-up of other benefits like Pension Credit and Council Tax Support. This is all the more important given the real risk currently negative perceptions (irrespective of whether they are right or wrong) of UC will discourage people from claiming it.

It is a while since government last made a concerted effort to increase take-up. The introduction of Pension Credit in 2003 shows that making take-up a key policy priority can improve living standards: this benefit was more generous and easier to claim than the one it replaced, and the new Pensions Service took a ‘proactive approach’ to take-up, spending £22 million on marketing targeted at potential claimants (see this evaluation by Inclusion, at page 44). In recent years, the charity sector rather than government has taken the lead in improving take-up, with Citizen’s Advice perhaps the largest actor in this space (see the summary of their impact on increasing benefit payments, much of which comes from increased take-up, in their 2015-16 annual report).

For the government to improve UC take-up, it will also require more accurate data. This is a job for statisticians at DWP and HMRC. Using administrative data to check the benefits that survey respondents receive is one solution, and DWP may be able to do this for all cases in future. HMRC should look to follow suit before next year’s take-up release. Further steps should also be made to allow comparisons of UC take-up with those for its predecessor benefits.

Non-take up may save the government money, but when people don’t claim money that they need there are real human costs. Properly measuring those costs is the first step in achieving our real objective – reducing them.