Happy the Budget is over Friday. As is customary, we celebrate with a TOTCs special on what on earth was going on. This one is penned amid half-term related crowd control on the West Sussex coast. The crowd control bit involves a mini-Spending Review every couple of hours to decide who gets which snacks, while watching the tide roll in is 100% not a recurring metaphor for Chancellor Sunak’s Canute’s claims to be holding back the tax rise wave despite overseeing (for good reasons) a tax rise tsunami.

I obviously recommend reading the result of the Resolution team’s overnight number crunching – with big thanks to all of them. Or watch a great discussion of it with OBR Chair Richard Hughes and Economist Linda Yueh. For TOTCs let’s focus briefly on the big picture of what got announced, but then dwell on what that tells us about the future of our economy.

Hope it’s of some interest, and either way have a great weekend.

What got announced
The Chancellor was handed a big (£141 billion over the next four years) lower borrowing windfall by improved OBR forecasts, reflecting faster growth, smaller permanent economic damage from the pandemic and higher inflation (which brings more tax in, especially with frozen income tax thresholds). The Chancellor kept the Prime Minister happy by spending half of this windfall, and kept the Treasury content by reducing the deficit with the rest to meet his new fiscal rules. The extra spending is frontloaded and focused on the ongoing Covid costs (quiet trains are going to be costing us for years). Smaller increases later on prioritise partially reversing some of the Chancellor’s own previous decisions: more generous Universal Credit (see below), undoing the overseas aid cut and avoiding the real terms cuts for some departments that his pre-Budget plans implied.

The Chancellor has boosted departmental spending by a further £25 billion next year, but a smaller spending top-up of just £7 billion outside of ODA is planned for 2024-25. 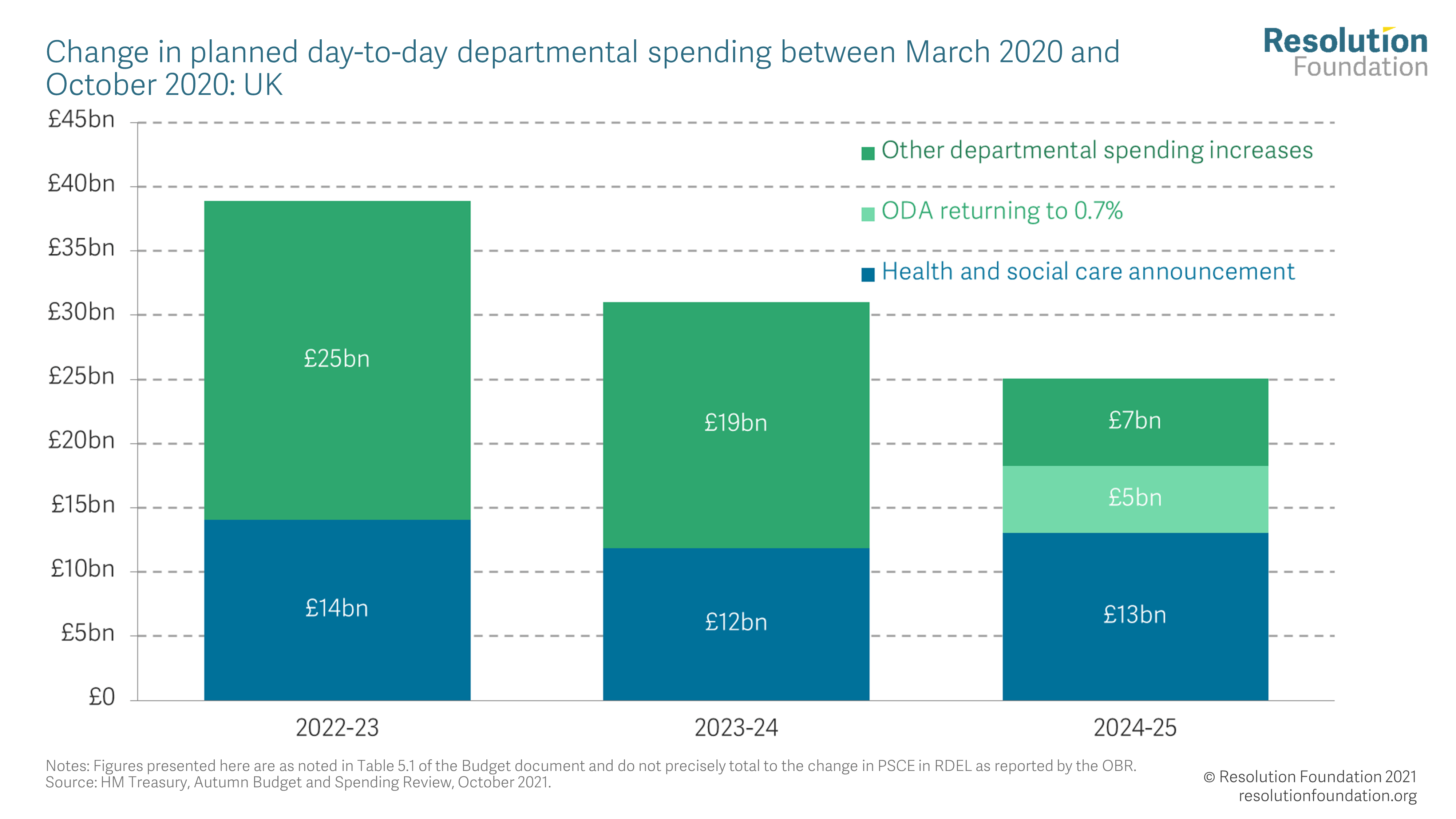 What women the Conservative Party want
As we emerge from the crisis bit of the pandemic, minds are turning to our economic futures. At his party conference Boris Johnson said he was building a higher wage economy, while on Wednesday Rishi Sunak put lower taxes centre stage: “My goal is to reduce taxes” he told the House of Commons. So a higher wage, lower tax economy is what they’d like. But it is not what they, and all of us, have got.

Taxes are up…
The Chancellor kept the low tax rhetoric in his speech, but ditched the reality. Some tax cuts got announced (e.g. for flying within the UK) but they are tiny compared to the tax rises already in train (National Insurance/Income Tax next April, corporation tax in 2023). So our tax to GDP ratio is heading north, hitting its highest level since 1950 (36.2 per cent) in the mid-2020s. Unlike the reductions in alcohol duty announced, this is not small beer: higher tax under Boris Johnson’s premiership amounts to £3,000 per household in Britain.

Tax is set to reach the highest share of GDP since around 1950. 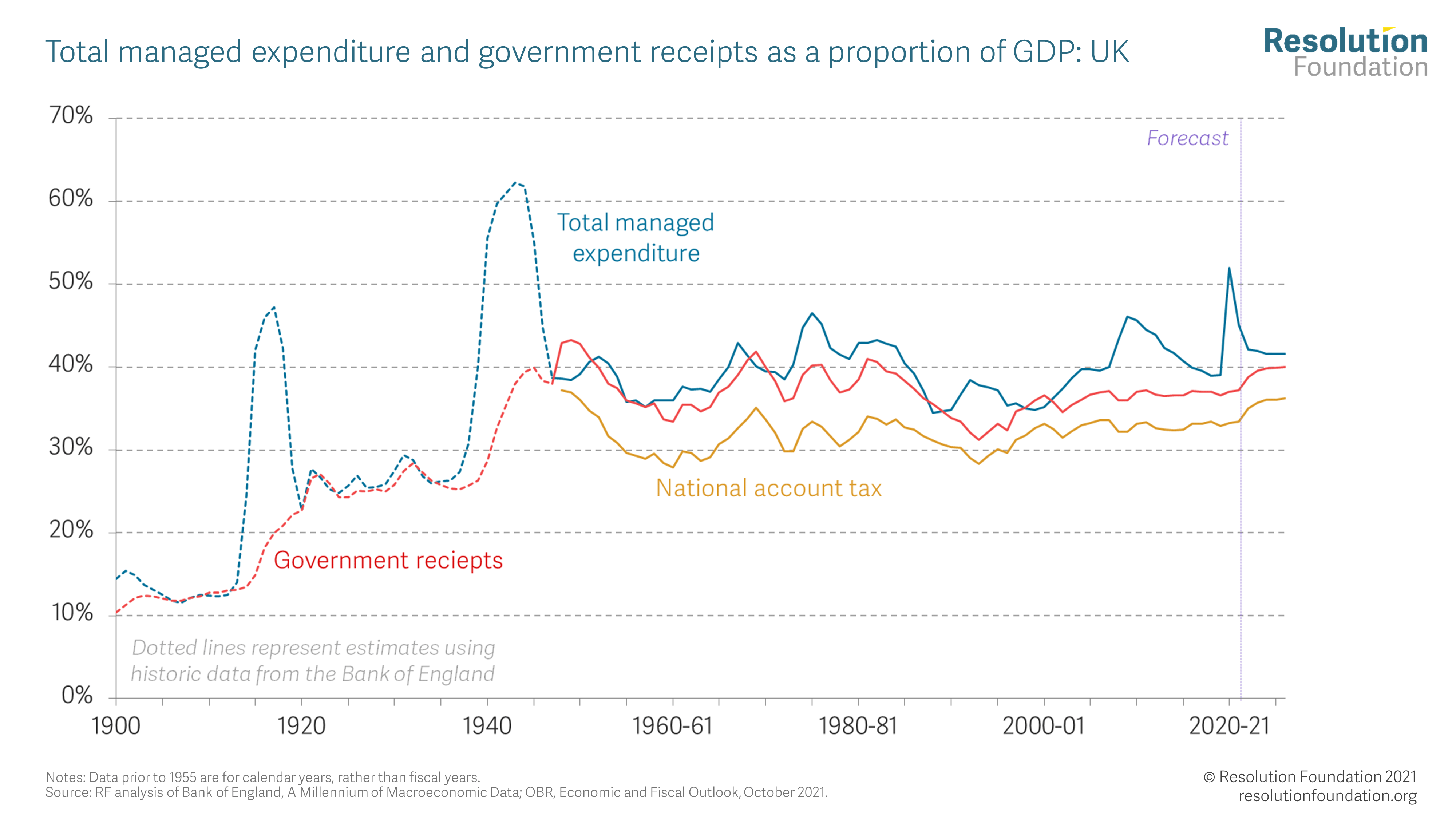 …because spending is up and the economy down
Higher taxes is how we square the circle of the pandemic (and Brexit) making our economy smaller than expected, but we’re spending more than planned pre-pandemic. Small state conservatives may not agree but these political choices are the right ones, reflecting:

Department of Health and Social Care spending will reach 46 per cent of total day-to-day spending controlled by Westminster. 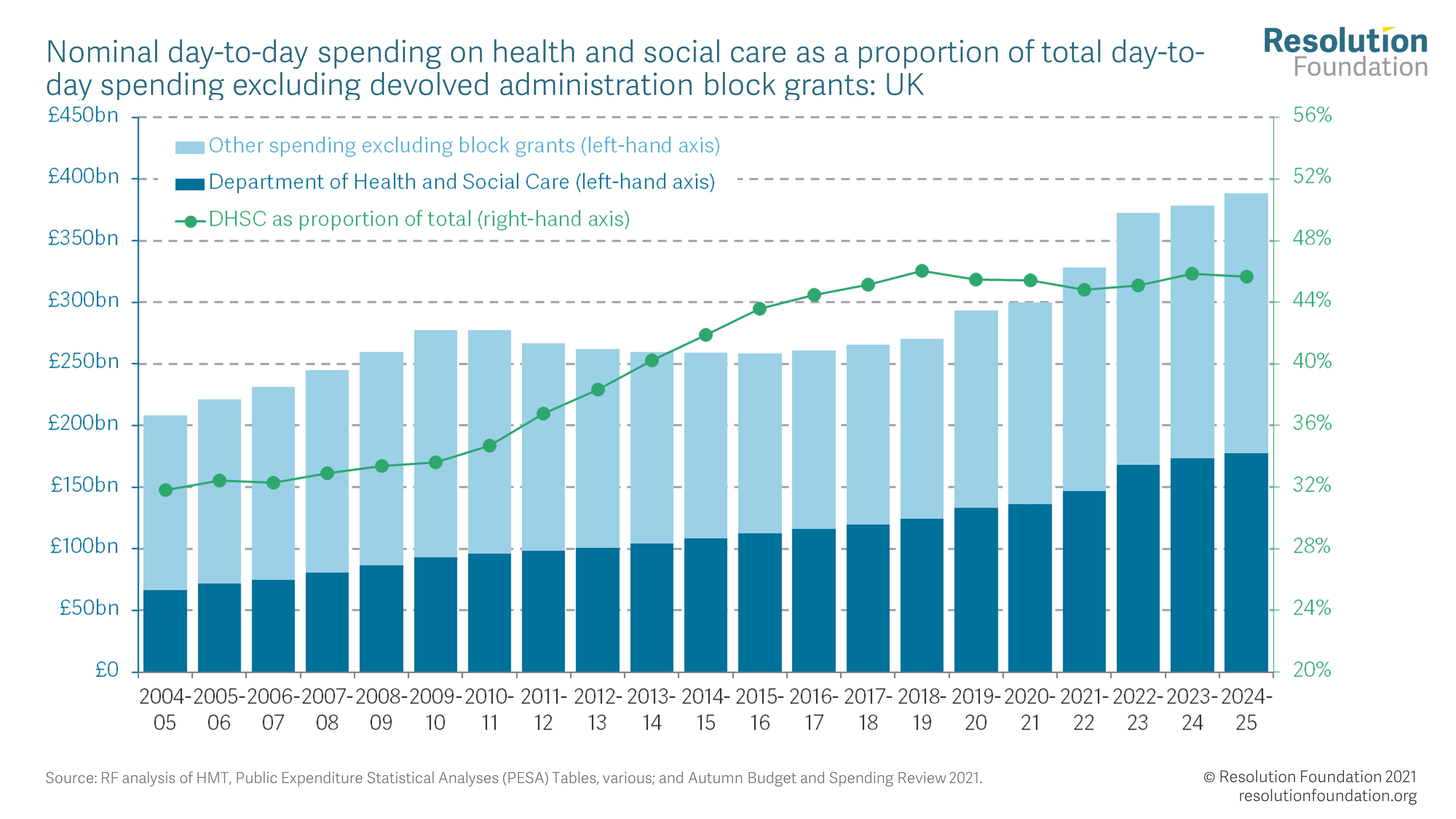 Wages are weak…
Economic news this autumn has included lots of angsting about labour shortages driving wages up. Which is like worrying you might get wet in the desert. Back in the real world rising prices is what’s happening. Inflation (now expected to peak around 5 per cent next Spring) means the OBR expects wages, and household incomes, not to grow at all next year as we continue the weakest decade for pay growth since the 1930s. Far from our new economic model being a high wage one, real wages are set to have grown by just 2.4 per cent between 2008 and 2024. Compare that to 36 per cent growth in the previous 16 years. That’s what an economic disaster looks like and it’s what happens when your economy doesn’t grow and faces repeated shocks. Neither economic policy nor politics is a game.

Despite an upgrade to GDP, the pay outlook continues to be poor. 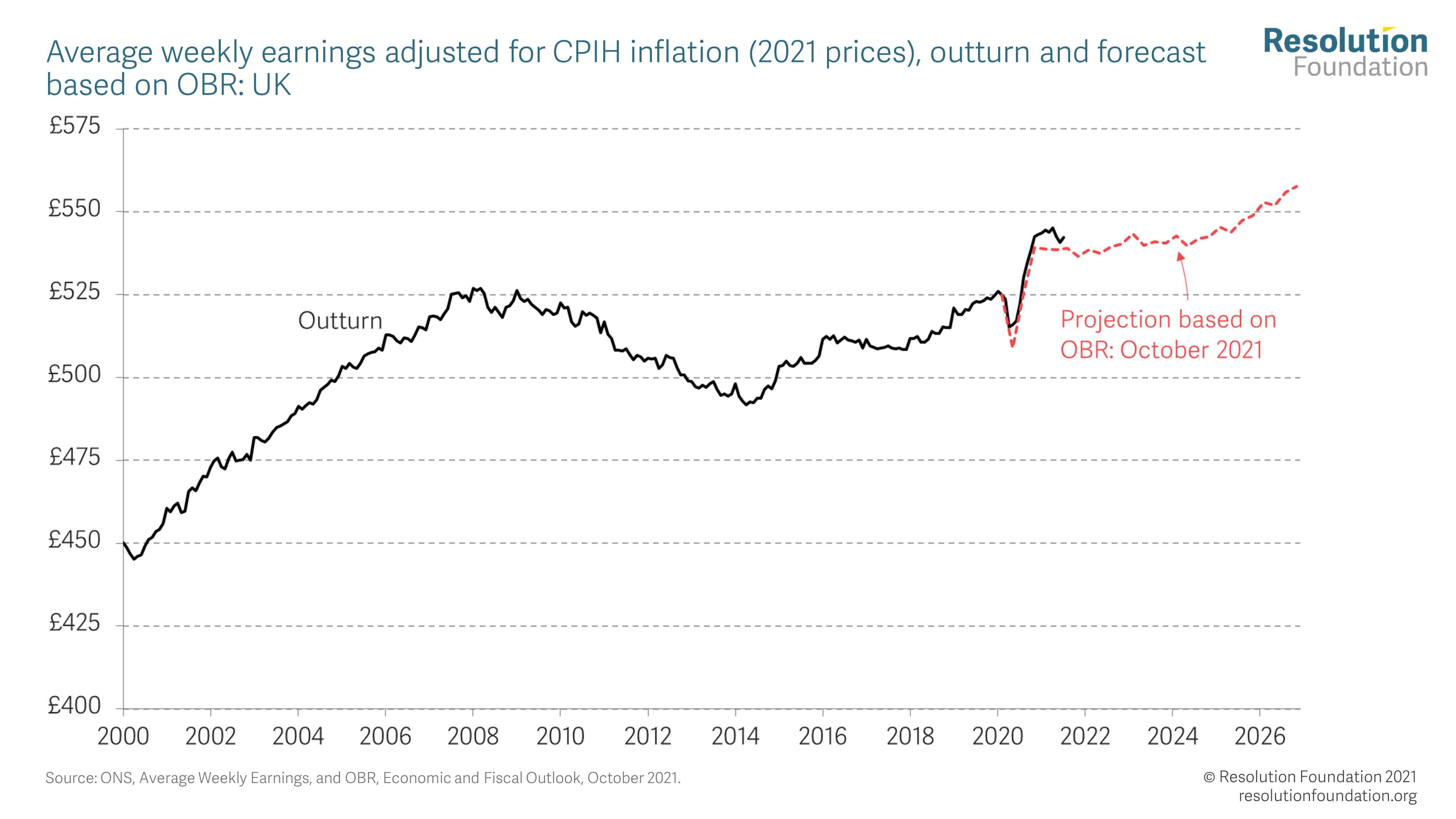 …and a tough winter is ahead for poorer household before taxes go up for the middle and top
The Chancellor rightly said rising energy costs are a global phenomenon, but for lower income Britain they’ve been exacerbated by the biggest overnight benefit cut in modern history (the £6 billion removal of £20/week from Universal Credit entitlements). The Chancellor partially undid the damage, announcing a very welcome £3 billion boost to Universal Credit that allows working claimants to keep more of their benefits as they earn more. But three quarters of claimants will still be worse off. Even if we also account for the above-average-earnings-growth boost to the National Living Wage next April (a 6.6 per cent rise benefitting over two million low earners) the bottom fifth of the population will on average be £280 a year worse off.

Budget changes increase household incomes at the bottom of the distribution, but not enough to offset the effects of the £20 a week cut to UC. 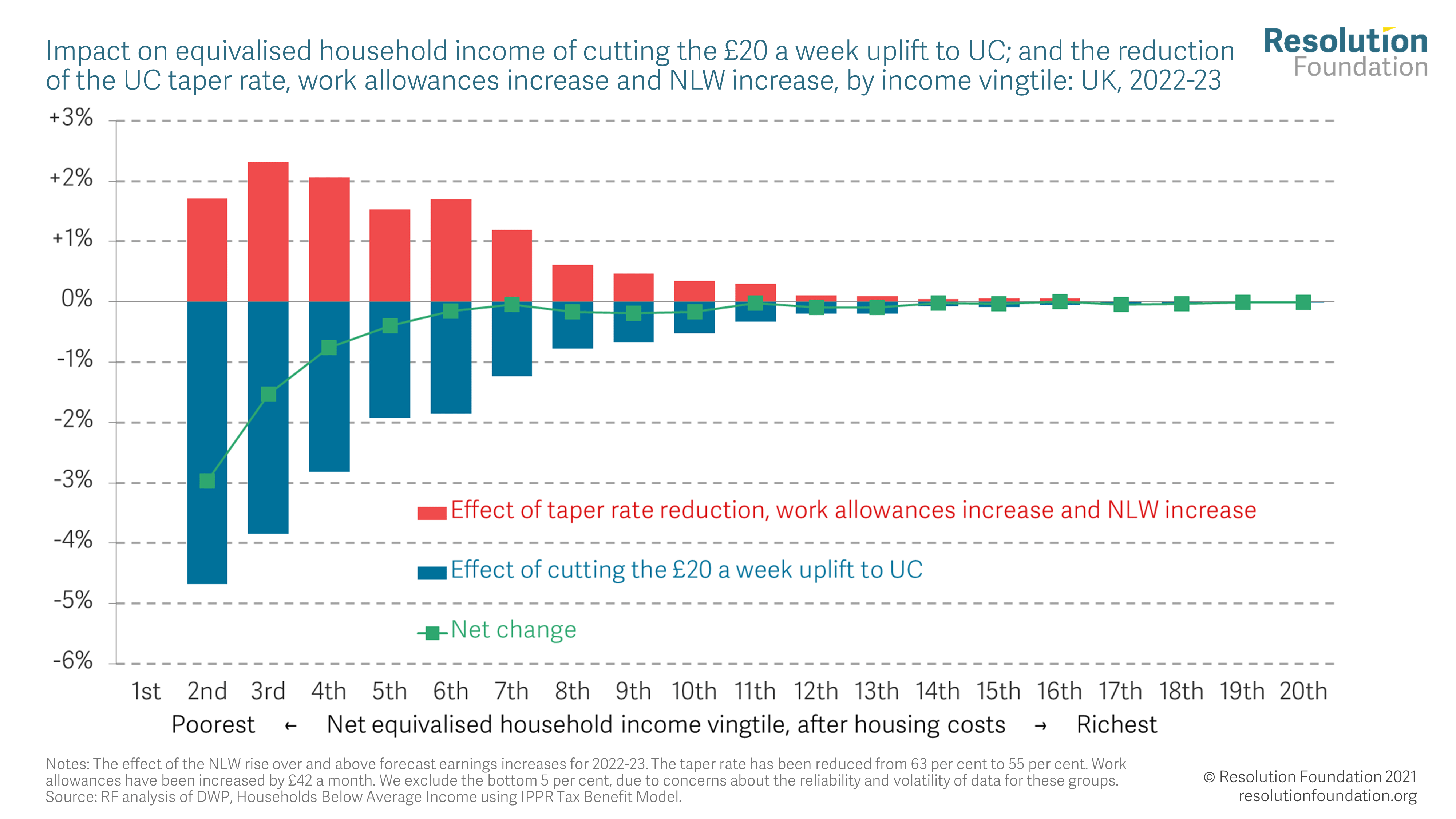 Looking further ahead, it’s the middle and top whose incomes will be squeezed most by the tax rises to come. Taking all Rishi Sunak’s policies together, the lasting impact is to reduce typical incomes of middle-income households by 2 per cent and the richest fifth of households by 3.1 per cent.

So the big picture of this Budget is that the OBR made the Chancellor’s life easier in the short term – allowing him to keep the Prime Minister and Treasury happy. But it also revealed our underlying problem: that a slowly growing economy facing too many economic hits in succession is not a recipe for higher wages or lower taxes.