It wasn’t what you’d normally call good news from the Bank of England yesterday. Apparently, our incomes will fall by around £800 per household next year. Wonderful. The forecast that we’re a few months in to a two-year long recession is just what we all want to hear. We’re talking about the economy being smaller at the end of this parliament than at its start. Any of you still think an early election is coming?

There was a silver lining to all the Bank’s gloom. They’re basically saying things are so grim they aren’t going to need to whack up interest rates as much as is “currently priced into financial markets”. Which is nice. Nothing says party time like celebrating mortgages only surging from 2 to 5+ per cent…

Given the rather serious real world, I thought best to balance the normal diet of articles with some light relief – this week in the form of fun/informative maps. I appreciate some cartography showing the way out of the current perma-crisis would be more useful, but just be grateful for what you’ve got – this is Austerity Britain people.

Taking trains. As promised let’s start with some fun… I really liked this visualisation of how far you can travel from different stations across Europe in five hours. The method is on the simple end but that’s fine to make some big points. Most importantly it illustrates that, despite how much we focus on the differences between parts of England, our defining economic geography feature is that we’re very small (the contrast with France, and the spider shape of rail connections in Spain, stand out).

Pummelling (house) prices. Rising interest rates mean falling house prices, all else equal. We’ll delve into the winners/losers from that across the generations in our upcoming Intergenerational Audit. But a key question is how quickly house prices follows rate rises – and specifically unexpected ones like we’ve had this year. Generally, economists think house prices only slowly adjust to central banks changing interest rates – in contrast to financial asset prices. But a new Vox EU column suggests this may no longer be the case. Examining 92 million US property listings this century, it shows monetary policy surprises feed through into house prices in weeks rather than years. How? The cost of new mortgages change swiftly (as we’ve seen this Autumn) which in turn affects demand from homebuyers. The rough order of magnitude here is that a 1 percentage point mortgage rate rise lowers prices by around 3 per cent within one month. Buckle up team.

Inventor immigration. This is a really interesting/relevant read. You all know we’ve been targeting as much economic policy incompetence uncertainty as possible in recent years, and this has had exactly the impact economic theory predicts: business investment has flatlined since 2016. But uncertainty affects people not just firms is the interesting finding from a new German paper. Specifically, it affects inventors who are substantially more likely to emigrate when policy uncertainty increases in their home country relative to elsewhere. The basic point is that they care about the variability, not merely the level, of potential rewards. The lesson for politicians involved in the current row about loosening migration rules for some groups to boost growth should be obvious: what matters isn’t just the rules you legislate for but whether people want to come and stay in the first place.

Census charting. Cherish the census. I hope you were already doing that. But if you needed further encouragement, Wednesday saw the latest data dump from the ONS of the results from the 2021 exercise. Attention has focused on the demographic/migration data (fair enough given it shows England and Wales have more migrants than previously thought and our non-census sources of counting people are rubbish). But don’t miss the new maps which are aesthetically pleasing and illustrate that the census allows us to look at some important questions at a much more local level of geography than other data. Check out the almost street by street material deprivation measures. There are wide variations – which turns out is also to be true for… marriage. 55 per cent of people in Wokingham are married/civil partnered vs. 25.6 per cent in Lambeth. Don’t hold your breath for a Resolution paper on that inequality.

CPI Climate. The will he/won’t he go to COP27 summit was big news this week. Which is lucky because a serious country should definitely allocate about 10 per cent of its public debate time to Rishi Sunak’s diary. The basic argument for not going was that sorting out the economy and tackling high inflation is a higher priority than talking about climate change – which made this new IMF note on the links between climate change and inflation rather timely. Looking across countries at the impact of climate shocks, the key finding is that they can have big and lasting effects on consumer prices. But different shocks have different effects: droughts raise inflation (i.e. food prices go up), but floods push inflation down. The authors’ main conclusion is that in countries facing regular shocks of this nature, the textbook idea that a central bank can easily target and deliver low and stable inflation is… optimistic.

Resolution researchers are busy on a fascinating project examining low hours working. Pondering their work got me thinking about the big drivers of working hours change, and one huge one: having kids. As COTW shows it’s only a huge deal for half of the population (you don’t need a chart to tell which half). This really matters: the gender pay gap has now come down a lot for younger women, but the ‘motherhood pay penalty’ looms as large as ever. Obviously, some men do cut their hours when they become dads, but on average there’s zero impact because others increase their hours (kids are expensive). When I posted this chart on Twitter earlier in the week, the main response was calls for more affordable childcare. I agree that would help, but personally I think this is ducking the real issue: unless we change the default position of men spending a tiny amount of time at home soon after a child is born, while women spend loads, then this isn’t going to change – and from painful experience there’s lots. 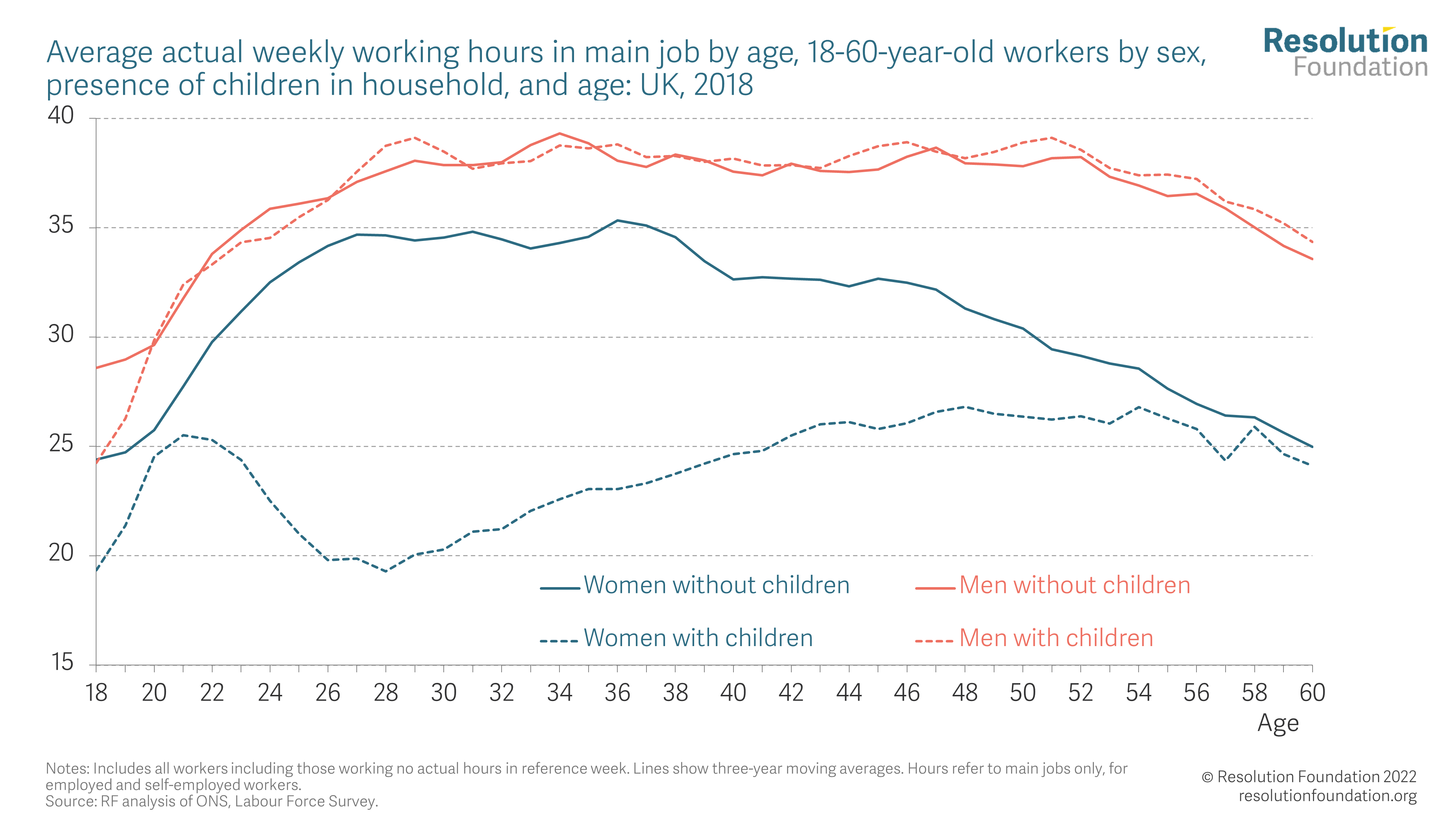