Glad to see we’ve had another Britain knocking it out of the park week. Our answer to a global pandemic very much not under control, and an economy in no way back to normal, is a ‘cash for curtains’ row. It’s not just the substance of it that’s demeaning: even the name of the scandal is pathetic. ‘Cash for curtains’ is literally just a draper’s job description. At least ‘Cash for questions’ in the 90s was actually the description of a crime.

The contrast with developments in the States is painful. We’re struggling to renovate a flat while President Biden is setting out plans to renovate the American economy. Turns out it’s our politics, not just our home-schooling-scarred youth, that need some catch-up lessons. Luckily we’ve got some coming up with a whole series of events debating how we make a success of the Covid recovery – featuring Nobel laureates, Cabinet ministers and thoughtful types galore. Come along. And in the meantime, enjoy this week’s reads.

Neighbourhood politics. Most of you probably don’t want to live next door to a politician – think of the constant renovations… But this paper might cause a re-think. Using data from Sweden the authors demonstrate that politicians tend to live in more affluent areas – especially politicians of the right. More interestingly, they then show that where politicians live has a material effect: “bad” outcomes such as apartment blocks being built or schools being closed are less likely to happen in neighbourhoods where politicians from a local ruling party live (compared to ones with the local opposition in). The authors point out that these results are a sign of favouritism driving decisions, and are surprising to find in Sweden, which has one of the lowest corruption levels in the world. Which maybe just goes to show that we should care about politicians failing to live up to hugely important ideals of public service, even if they haven’t technically been corrupt.

Bidenomics. All that is really being heard over here about Biden’s plans are the big headline numbers ($1.8 trillion for this week’s “Families Plan”), but it is worth your time reading what is actually being proposed – here’s the White House’s primer. What stands out is that there’s a lot of it: not just spending more on children, but reform of unemployment insurance and big increases in capital gains tax. This is very radical for US policy making – it’s basically an attempt to turn the US into a more normal European-style economy (albeit one with lots of guns). So not that radical at all.

Inheriting luck. Household wealth has been surging in Britain for 40 years, so inheritances are too. The impact? How wealthy you will be increasingly depends on who your parents are, rather than what you earn, as new research from the IFS this week reminds us. But parental wealth affects us long before our parents pass away, for example shaping our education. On that, read a US paper (free version) examining the impact of parents winning the lottery on the odds of their children going to university. Obviously, there’s an effect ($100,000 of lottery winnings increases enrolling by 0.6 percentage points), but what is interesting is that the additional effects of an extra $1 don’t really get weaker until the size of lottery wins is huge (wins of over $1,000,000 on average increase attendance by 10 percentage points). These wins are far more than the actual cost of college, which leads the authors to conclude that households aren’t behaving as lots of economic theory suggests they would (i.e. going to college if it makes financial sense over their lifetimes IF they can access the upfront cash to do so). Instead we treat it like a normal consumption item, in that as we get richer we want more of it.

Loving education. Wealth shapes our education, and education shapes who we marry. People who attend university are more likely to marry someone else who has, and those who study the same subject or attend the same university are as much as 20 per cent more likely marry (I’m proof of this). New Norwegian research asks why. It’s full of romantic phrases – such as “search frictions” (i.e. how hard it is to find someone). Which is nice. The conclusion isn’t surprising – people are getting married not because choosing a particular university/subject reflects underlying character traits/compatibility but just because… they went to the same university. Universities are “marriage markets”. This effect is strongest for those studying medicine and law. Some would say because medics and lawyers are lacking in imagination, but I couldn’t possibly comment.

Levelling up. Interesting economic history news comes from a new working paper that investigates German reunification to understand what drove up wages in the East (which rose from half the level in the West in 1992 to two-thirds five years later). The argument is that strong wage growth wasn’t primarily about workers moving from East to West, but was actually the result of workers moving between and within firms in the East swiftly after Communist-era controls on who worked where were lifted. This in turn meant a better use of talent, higher productivity and higher wages. This is part of the classic argument for a market economy, where workers can move easily, rather than a planned one, where workers and firms have little choice. The lesson that ensuring people are able to be mobile between jobs when they want to is an important one: liberals should value the choice and freedom involved, and everyone should want the higher wages it can bring.

The Covid downturn has hit young workers hardest. But in fact the crisis has resembled more of a U-shape, with employment also falling among older workers (at twice the rate of those of us labelled middle-aged). Crucially, the challenges associated with unemployment differ by age, as this week’s Chart – from a new report – shows. Workers aged 50+ who lose their jobs tend to take longer to return to work than younger workers – under two-thirds find new work within six months. And, relatedly, they also take a significantly higher pay hit on returning to work than young or mid-career workers. A 10 per cent hourly pay cut compared to their pre-unemployment earnings rises to a 17 per cent weekly pay cut when hours reductions are included. So, periods of worklessness put young people’s career on slower trajectories but they often put older workers on a downward one. Another reason for policy makers to focus on minimising the rise in unemployment to come later this year when furlough ends… 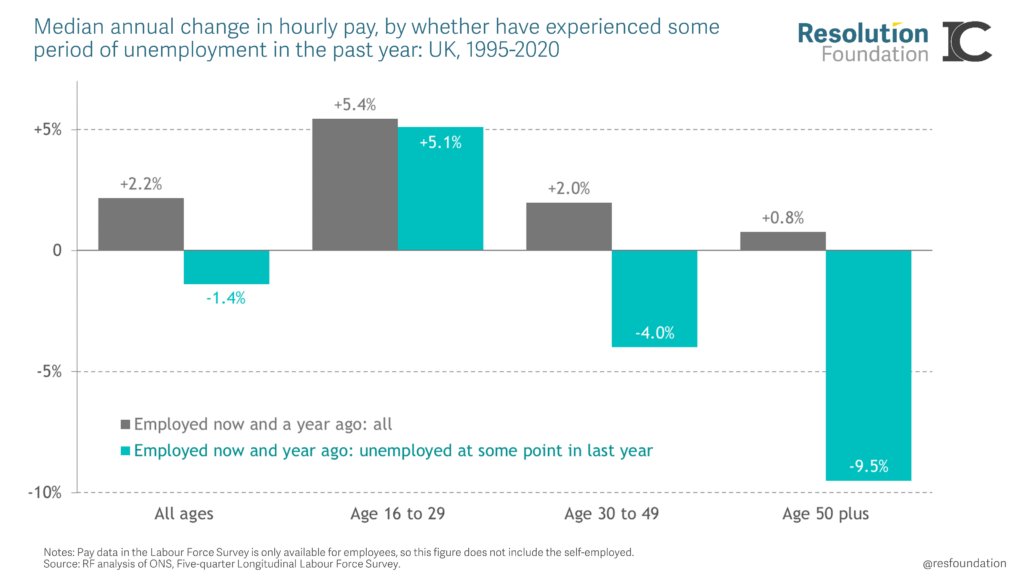