Politics is dominated by staffer chat this week – Keir Starmer’s moving some of aides around and Matt Hancock’s… moving around with one of his own. This is all rather distracting us from the big picture: we’ve adopted a herd immunity strategy for the youth without anyone talking about it.

Now I’ve absolutely no idea if this ‘let the kids all catch it’ plan is right or wrong (after all the only long-term alternative, if increased transmissibility of variants means we can’t get to population immunity via jabbing adults, is to vaccinate lots of school children). I’m hoping someone does. Selfishly I’m more focused on the impending doom of this youth wave meaning ever more school kids sent home to isolate. I was just about holding it together despite the bad weather but drizzle + home schooling = end of days.

Have a great weekend praying that doesn’t happen to you and enjoying this week’s reads.

Digital dependence. We’ve got no self-control. That’s the finding of an excellent/traumatising new paper digging into the increasing amount of our leisure (and work) time taken up by social media. The authors conduct an experiment, paying participants a $2.50 bonus for every hour they reduce social media use. Crucially falls in use persisted even after the payments stopped, with almost 90% of participants setting limits on screentime without cash incentives. The conclusion is that our social media use matches the patterns of addiction, with our consumption of the Facebook, Twitter, and TikTok shaped by habit formation and a lack of self-control, not just the intrinsic value of the products. Being economists, they take these results to a model and estimate that over 30% of our screen-time is the result of addiction: a pretty sobering thought. I’m just off to tweet about it.

Good news. Some mixed news on the gender progress front. In economics land it turns out we’ve at least made some progress on recognising female economists. New work (free draft) finds that prior to the 80s a women was less likely than a man to be made a fellow of the most prestigious economic societies based on their research record, but this has since switched with women enjoying a positive impact equal to having an additional publication in a Top 5 journal (although note membership remains well over 50% male).

Bad news. This is pretty grim. TOTCs has documented the impacts of school/nursery closures on those trying to work in this pandemic – with the burden falling more on mothers than fathers. But as we emerge from the pandemic will the damage to gender equality amongst parents unwind? Worrying news comes from Germany with research showing the past year has shifted attitudes of fathers toward mothers working. The proportion of fathers with very egalitarian attitudes towards gender roles dropped significantly in 2021 (by 7 per cent or more) in west Germany (which has long lagged beyond the more egalitarian east). This comes after years of steady progress. Of course fathers don’t (or at least shouldn’t) get the final say: note the pandemic hasn’t changed women’s views one bit.

Stressed survivors. When firms make their workers redundant we focus (rightly) on those who lose their jobs, but what happens to the survivors who keep them? Ill health is the conclusion from new research into this underexamined area. Headline finding: surviving workers face persistent health issues with drug prescriptions and hospital stays both increasing. The effects are driven by mental health and cardiac conditions, and are largest for workers living in areas of high unemployment or with spouses on low wages – so stress due to job insecurity, rather than overwork, is the likely cause. The conclusion = when firms downsize it’s bad news for those leaving, and those left behind.

French future. Last year, the great and the good of European and American economists were pulled together by President Macron for a Commission on the major future economic challenges. The topic is huge, so it’s not surprising this week’s final report is 400+ pages. It focuses on climate change, inequality and demography – all key areas of focus for our not dissimilar Economy 2030 Inquiry (Nick Stern and Dani Rodrik are bravely involved in both). Lots of food for thought in there. The inequality section notes that while 73 per cent of the French think high inequality is a worry, income inequality has not risen over the past two decades. The commissioners argue that France might be (relatively) equal but it is not mobile: access to education is very influenced by your parents education, and those born poor are less likely to become rich than is the case across the OECD.

Since we launched our intergenerational work five years ago, one rant question constantly comes up – who had it worst when it comes to buying their first home? Was it the high-interest rate-laden baby boomers of the 1970s and 1980s, or today’s priced-out millennials? We’ll provide the answer in new research out tomorrow. Here’s a sneak preview showing how the profile of young first-time buyers has changed over the past 50 years in terms of their incomes relative to their peers. As home-ownership grew throughout the 70s, 80s and 90s, new FTBs included lower income young families getting onto the property ladder. But that ‘democratisation’ of home-ownership has been in steady decline since the mid-90s (bar a post-financial crisis blip). Put simply, today’s young people need higher incomes vis-à-vis their peers to access home ownership than previous generations. That’s the intra-generational impact of the huge intergenerational gaps in home ownership. 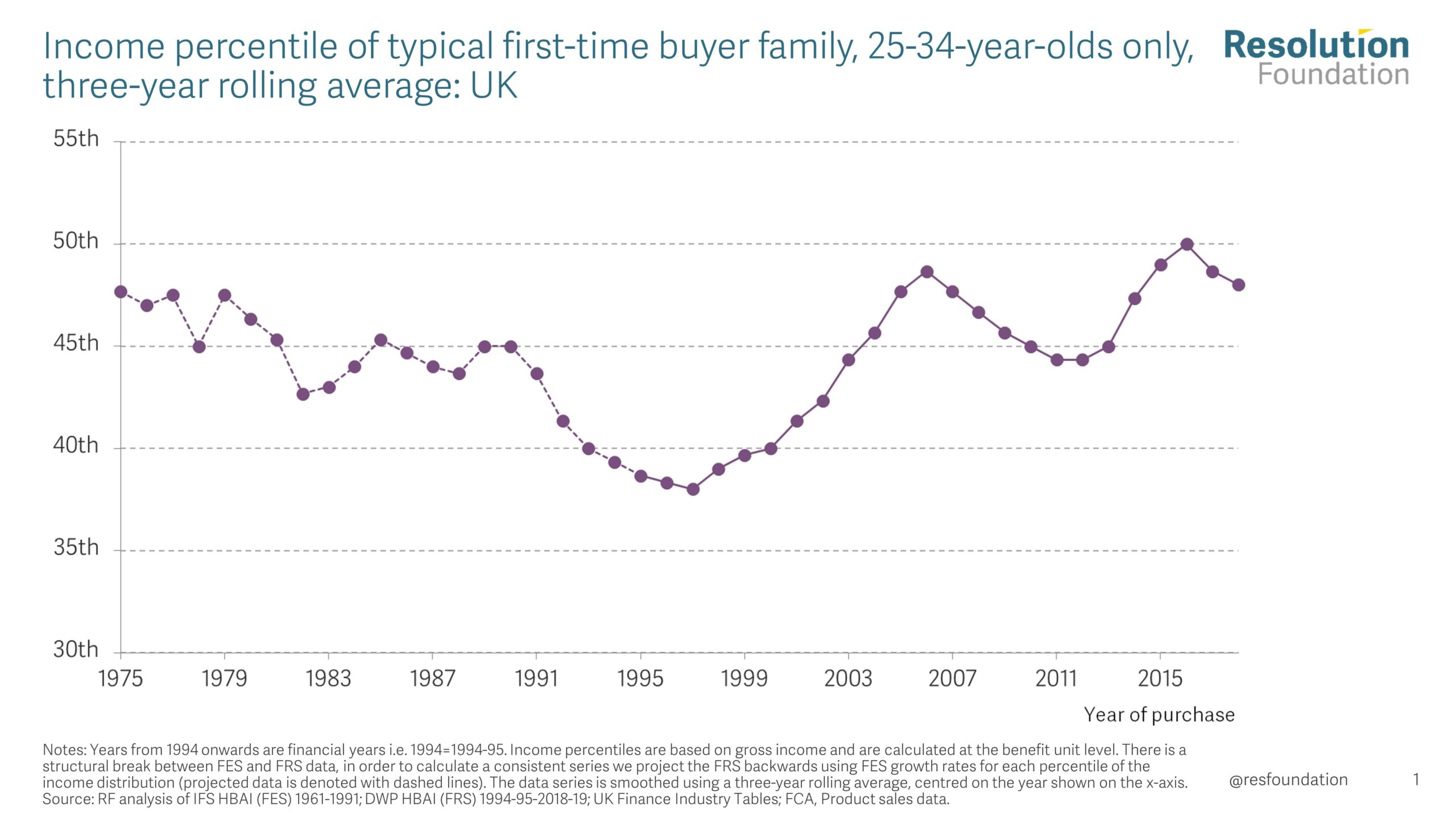