We’re not doing reads this week, we’re doing reflections. There is after all a lot to reflect on from last night – on what happened and where it leaves our politics and our country.

I hope it’s of some use to you whether you’re spending your weekend in party mood, or at a wake.

An historic triumph for the Conservatives, and a crushing defeat for Labour.

The headlines from this election are clear, and in some ways the explanation is too. The Conservatives reran the 2017 election minus the incompetence, and it worked. Labour decided to neither deal with its problems (division and Corbyn) nor answer the question the country was asking (Brexit). So the country said no thanks. But under those headlines it’s worth digging deeper.

1. The scale of the win/loss is huge

It’s hard to overstate the scale of Boris Johnson’s win, and Jeremy Corbyn’s defeat. It’s not just that 80 is a big majority by general election standards, or that 43.6 per cent is the highest Tory vote share since 1979. This result is so bad for Labour because it’s happening when the economic and political cycle should mean Labour romping home. Official oppositions don’t often lose 59 seats – they’re generally in the business of whittling down a government’s majority or seizing power themselves. 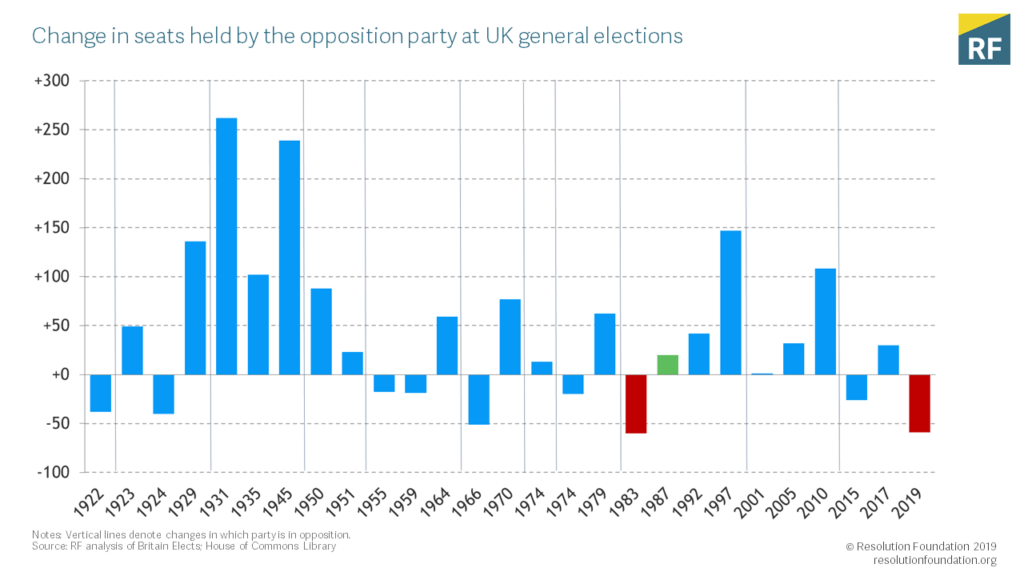 Looking at the last century, only in 1983 has an opposition lost more seats than Labour did last night.  Crucially that was after only four years of Margaret Thatcher’s government, whereas the Conservatives have now been the incumbents for nine long years – by now the public tend to fancy a change. Clever clogs might say that Labour lost by 10 percentage points in 1987 after an almost comparable 8 years of Conservative rule. But even then Labour didn’t lose seats and the economic backdrop was very different to today. For those people and places not scarred by unemployment, 1987 was boom time Britain. Today, our economy is hardly growing and earnings are only just returning to their pre-crisis level a full decade on. 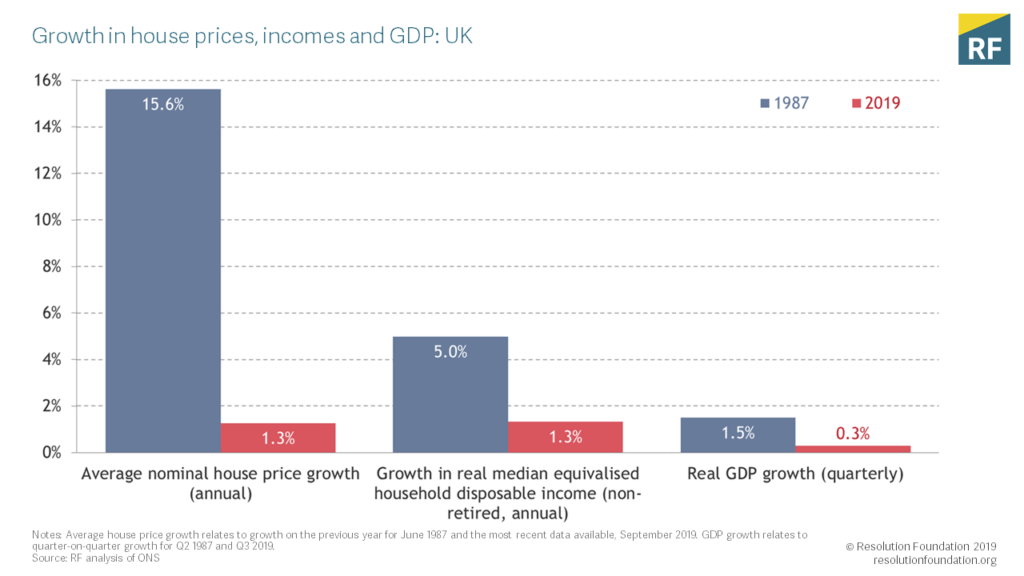 2. The north/south voting gap has closed – but pay more attention to the squeezed midlands

Across much of the country this election was about Labour going backwards vote share wise, rather than the Conservatives hugely gaining on 2017. The north/south split is also very clear – with the biggest movement being in the former. But given how much media narrative focuses on Conservative progress in the north, it’s worth noting it’s the Midlands that saw the biggest increase in Tory vote share. Two out of three Wolverhampton seats, along with Bolsover, now have Conservative MPs. The ongoing distinct electoral path of the North West also stands out – being less receptive to voting Conservative the nearer you get to Merseyside. 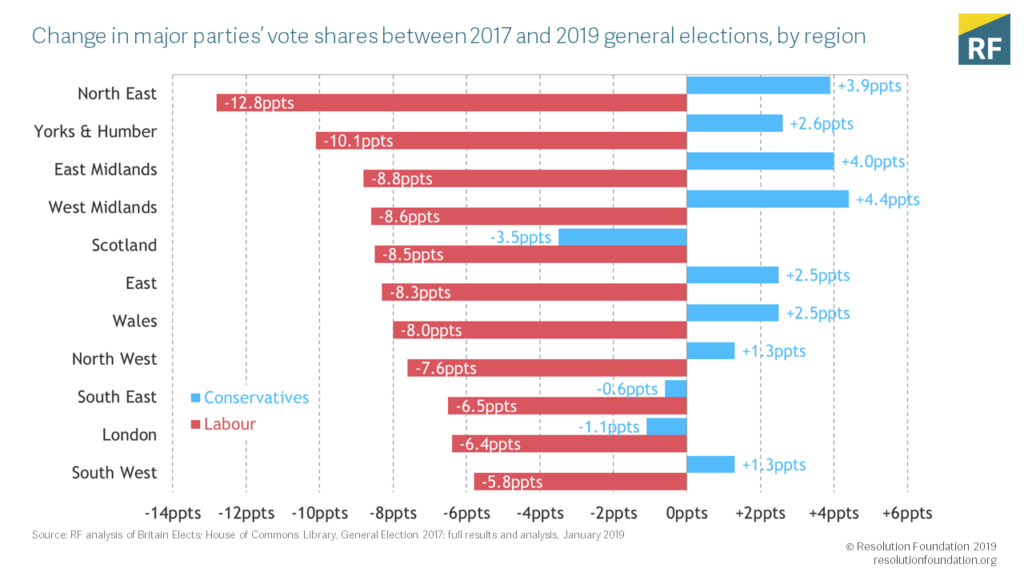 3. Brexit mattered – but Boris Johnson was standing on the shoulders of giants Theresa May

A lot of what happened last night is about Brexit. But when it comes to the Conservative vote share this is as much about Theresa May as Boris Johnson. The 2017 election saw the Tories increasing their vote share where the leave vote was strongest (the blue line in the chart below). The 2019 election then saw a doubling down to further reinforce that trend (the red line). 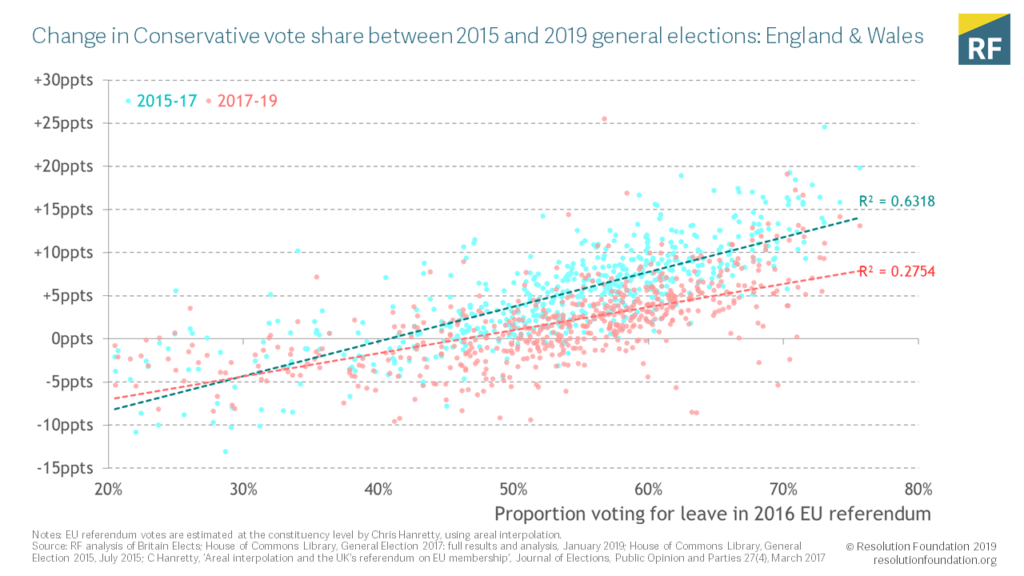 Labour gained votes in 2017 with far less variation than the Conservatives between leave and remain seats – albeit with stronger increases in remain areas. Last night changes in Labour’s vote share were more shaped by their Brexit vote than two years back. So from both parties this was more of a Brexit election than 2017, but the impact accelerated for Labour while Theresa May did most of the work for the Conservatives. If Boris Johnson is supposed to be a can of Heineken that can reach the parts of the country others can’t, then his predecessor was a bottle of the very same liquid. 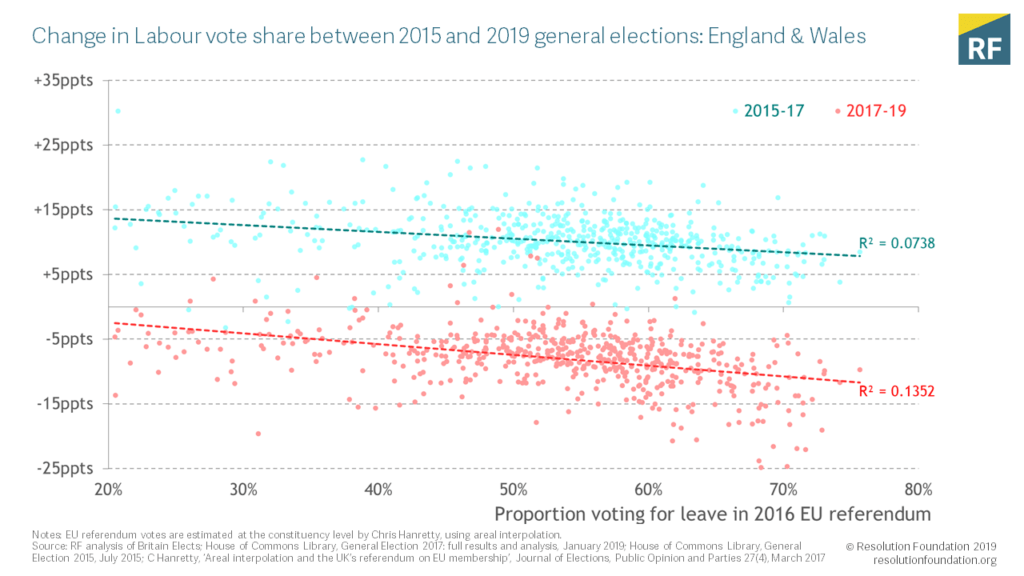 4. Labour held on in younger places

The longer term move of age to the centre stage of our politics also played out differently across the parties. Consistent with the party having snaffled up much of the Brexit-related vote in 2017, it is that election that saw a steepening of the age gradient of Tory votes at the constituency level with a slight falling back this time. 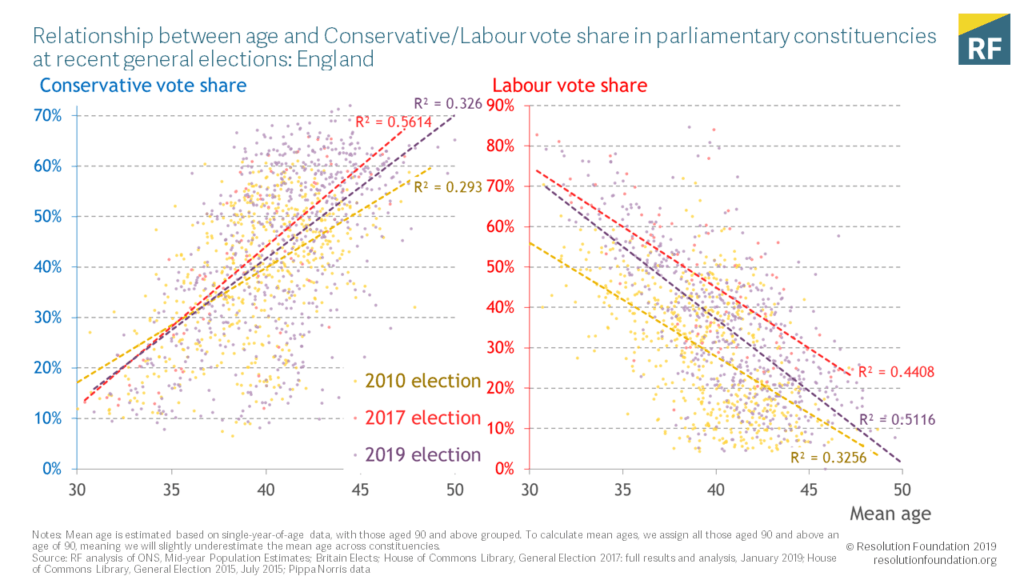 Labour saw the opposite, with a significant strengthening of the importance of constituency average age in determining their vote share. This is another way of saying that Labour has become even more reliant on young places, and lost votes in older places to the Brexit party. This matters a lot for which seats changed hands. The Conservatives gained 9 of 137 Labour seats among the youngest 30 per cent of constituencies but a massive 14 of 23 Labour seats in the oldest 30 per cent. 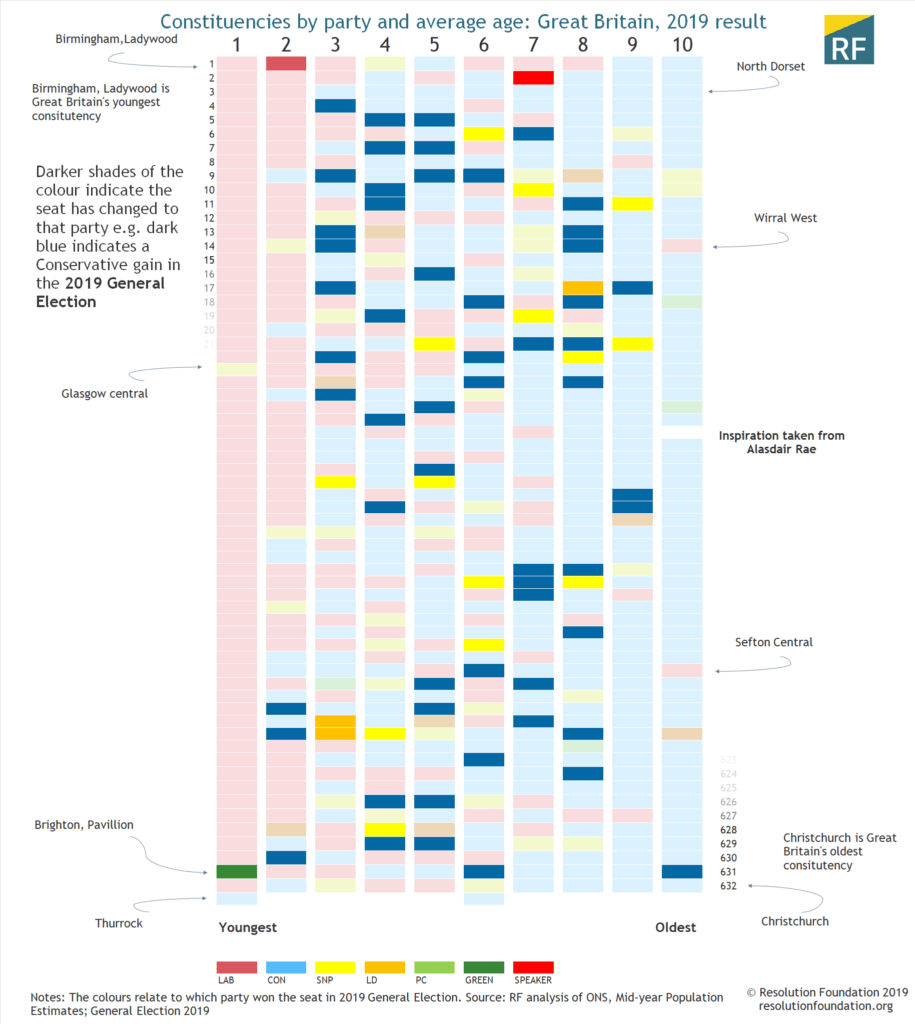 More consistent across the two main parties is the decline (although far from elimination) of the importance of deprivation in determining vote share. Poorer places are still much more likely to vote Labour, and rich ones to vote Conservative. However, the Conservative vote in particular saw a weakening of that relationship – something that also been happening at the level of individual voters over time. 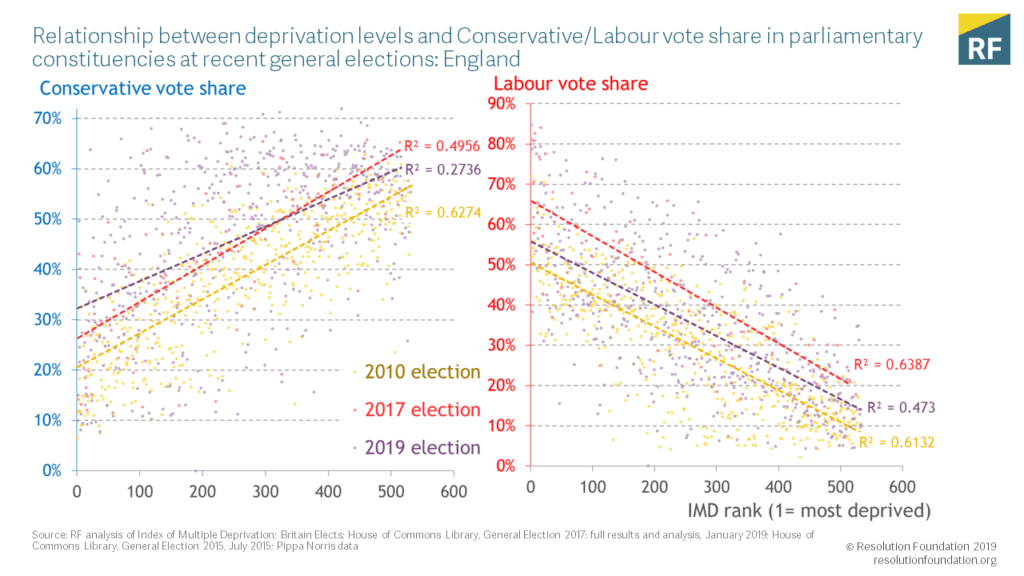 This isn’t surprising given the Tory vote share increased more in the north than the south and saw them take seats like Blackpool South. The result is that the Conservatives, not just Labour, face existential questions, albeit ones they face from a much stronger position. While Brexit has brought places and people that haven’t traditionally voted Tory into their coalition, are they prepared to change fundamentally what they are about as a party to hold that coalition together? Here’s a way to spell out the challenge. The average wage in Tory seats before last night was around £15.40 an hour – while amongst those seats they won last night it was much lower at £13.70. Small state conservatism will have to go, in favour of a leftward shift on the economy and/or a good dose of social conservatism. Boris Johnson might use the same “one nation” label as David Cameron, but what it means will be wholly different to the austerity plus metropolitan liberalism of his predecessor.

Another question the Conservatives will need to face is the gender one – and why men are so much more likely to vote Conservative than women (a 6 percentage point gap). While Labour have to answer the flipside of this question, they have the advantage of their MPs being 50/50 gender balanced while the Conservatives somehow still manage to have fewer female MPs than Labour despite having near twice the seats overall. 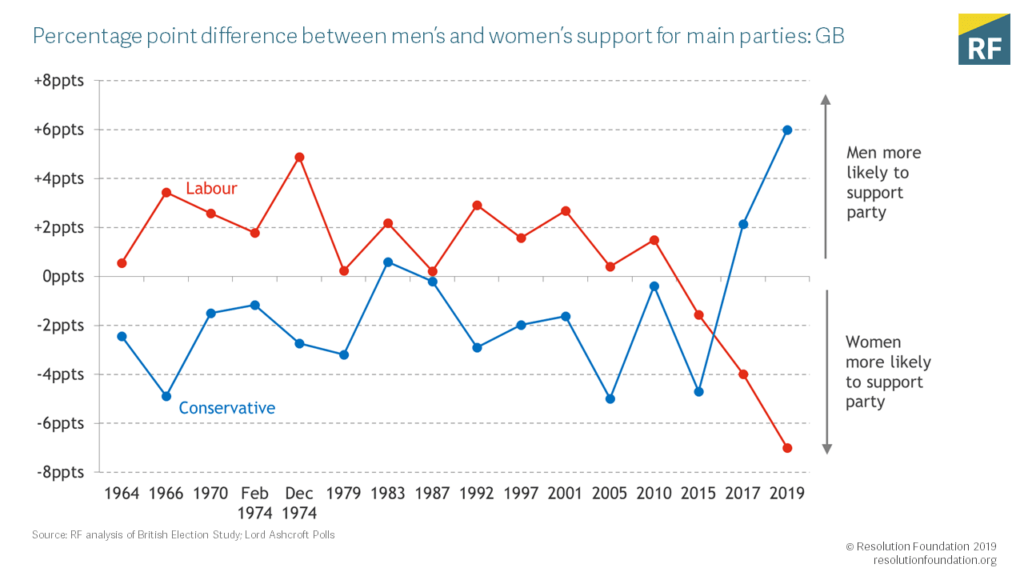 6. Reports of Labour’s demise may be overdone

Last night was a truly awful night for the Labour movement. When they should be taking power, they were moving away from it. There are big lessons to learn – not least about focusing on the wants and needs of the country you seek to govern, and spending your time building coalitions rather than fighting self-indulgent civil wars. But there are reasons for thinking those saying it’ll be decades for Labour to bounce back should be less certain. For instance, surveys show that Labour’s biggest problems in this election were Corbyn and Brexit. The first of these is on the way out, and the existential phase of the second will come to a close in seven weeks’ time. This isn’t to say everything is rosy for Labour – but more that those in the party seeking a glimmer of hope should note that the levels may be low, but the volatility is high. .

Last night was a clear cut election – Boris Johnson won, and Jeremy Corbyn comprehensively lost. The lesson is that parties need to understand the question the country is asking in that time and that place – and then spend their time ensuring they are the answer to it. Boris has won that battle hands down in 2019. The future, as always, is another land