The kids are quite excited about this rover landing on Mars thing – especially the looking for signs of life bit. Which is odd given that you have to look pretty hard for signs of life outside our front door right now. Personally the prospect of some “non-essential” strolling in March is more exciting, but then again I’ve never really had the space bug (I think this is a generational thing – my boomer dad was obsessed).

The reads this week combine some urgent court cases and urgent economic debates, and some longer-term lessons of history.

Have a great weekend all,

Uberillegal.  It’s been a very long time (5 years) coming, but this morning we at last got the welcome and final (i.e. Supreme Court) ruling that Uber drivers are workers (entitled to minimum wage/paid leave), not independent contractors as the firm claimed. Why? Because Uber exercised so much control over drivers (controlling fares, which trips they accept, how they communicate etc.) that it’s ludicrous to suggest they were entrepreneurs. Lots of people have got overexcited saying that this is end of the gig economy. In the real world this ruling doesn’t automatically apply to all Uber’s drivers and gig firms have already/will reduce their control to avoid the rulings implications for their business models. This row is going to run and run (see Uber’s response which says nothing changes for now and our drivers won’t like being classified as workers – i.e. they’d rather have current flexibility than fixed shifts that would come with the minimum wage). This should convince us that relying on long judicial processes to resolve these problems is deeply suboptimal – especially because lower earners are far less likely to bring such cases. It’s time Parliament not just the courts did their job: sort out the VERY strong financial incentives for firms to force workers to be self-employed (i.e. they escape paying National Insurance) and provide more clarity on employment status.

Persuasive economics. We all spend lots of our time thinking about what tasks we have to do in our jobs, and probably not enough on how exactly we do it. So hopefully it’s useful to Cecilia Rouse (new chair of Biden’s Council of Economic Advisers) that one of her predecessors, Jason Furman, has taken the time to offer advice on the job. Even if not there’s some important points for anyone providing economic advice in government. Some highlights: economists are meant to understand the importance of comparative advantage, so stick to the economics and don’t spend your time offering political advice (even if you think you’re good at it). From experience literally everyone breaks this rule. Jason then has some extended gardening metaphors. You will have to try to stop bad ideas happening (“pulling up weeds”) but loads of economists in government just do this (and accomplish very little as a result). Get on with coming up with some good ways to achieve political objectives (“seed planting”). Running through the advice is a healthy call for humility, which is never a bad thing/too rarely present in economic policy discussions…

Escape networks. We all know that we are more likely to go and work (or indeed live) in places where we already know people. Not least because we’re more likely to know if a new job comes up or feel like we could settle in well. But strong evidence for this effect comes from research into an awful case study: the dismissals and restrictions imposed on academics from a Jewish background in Germany from 1933, that saw many leave the country (Einstein had already left in 1932). The authors examine how much academics professional networks impacted on whether or not they left the country and where they went. If academics had 10 links to early émigrés (i.e. those leaving in 1933/34) they were 5 percentage points more likely to emigrate themselves, especially when they came from the same universities. The paper isn’t just tough reading with regard to Germany: one of the reasons networks mattered so much is because it helped those trying to find academic positions outside Germany overcome anti-Semitism. The authors think there is a more general conclusion from their work: that when it comes to high-skill emigration, it’s professional rather than community networks that count.

Different debates. Something very odd is happening in transatlantic macroeconomic debates. The US is debating whether a further £1.9 trillion fiscal stimulus is just about right or a bit too big, while UK rows are currently all about how to phase out government crisis support (e.g. the furlough scheme) without mention of further fiscal stimulus. Now these debates shouldn’t be identical (lots of what is in Biden’s £1.9 trillion package is already happening in the UK, which those saying the UK government should just do the same as Biden ignore) but the gap is staggering. We’ll be offering our own corrective to that on Thursday next week, but to keep on top of the rows across the pond you could do worse than watch the discussion between splurge sceptic Larry Summers and the more relaxed Paul Krugman that Princeton recently hosted (note that until recently both have been in the camp arguing for a much more active fiscal policy). Summers’ concerns are two fold: £1.9 trillion could overheat the economy/generate inflation and use up huge amounts of scarce political capital better spent on other causes. Krugman is chilled on inflation and notes that there are also lots of risks from being too timid.

Populism lasts. There’s lots of populism around these days. And lots of debates about the causes of that populism point to it being a response to bad economic outcomes. But what actually happens to the economy after populists come to power? Fascinating new research tracks 50 populist presidents/prime ministers from 1900-2018 (the latter year marks an all-time high in quantity of them). The conclusions: having a populist leader reduces country GDP by around one percentage point per year. But the bigger point is that once you’ve had one in power, populist leaders repeat on you: Argentina and Ecuador have had on-off populist leaders since 1916. So populists are like cigarettes. It’s not the first one that does you in – it’s getting addicted to the things that kills you.

We’re borrowing lots of money. In case you’d somehow missed that, this morning’s public sector finance stats offered a reminder with January borrowing coming in at £9bn (we normally don’t do any borrowing in January because its when self-assessment receipts come in). But that’s not massively surprising/interesting (if anything it was less than expected). The more interesting things come from digging under the borrowing headlines to understand how this crisis differs from previous ones. Generally the story of recessions is GDP shrinks so spending rises and tax revenues fall. In January however all of the deterioration in borrowing compared to January 2020 came from higher spending (up around £20bn) with tax receipts holding up remarkably (especially employment taxes). This reflects the big picture of this crisis as this week’s chart shows in comparison to the financial crisis: despite a simply enormous GDP fall, tax receipts have stayed relatively strong while spending has gone through the roof with virus fighting measures from test and trace to furlough. Indeed these are two sides of the same coin: resilient taxes show that huge spending to insure people’s incomes has worked (on average). To take a concrete example, you still pay income tax and National Insurance on furlough. The less good news is that it’s perfectly possible we’ll actually see weaker income tax receipts next year despite rising GDP, as government support for the economy unwinds. Pandemic public finances are a messy business. 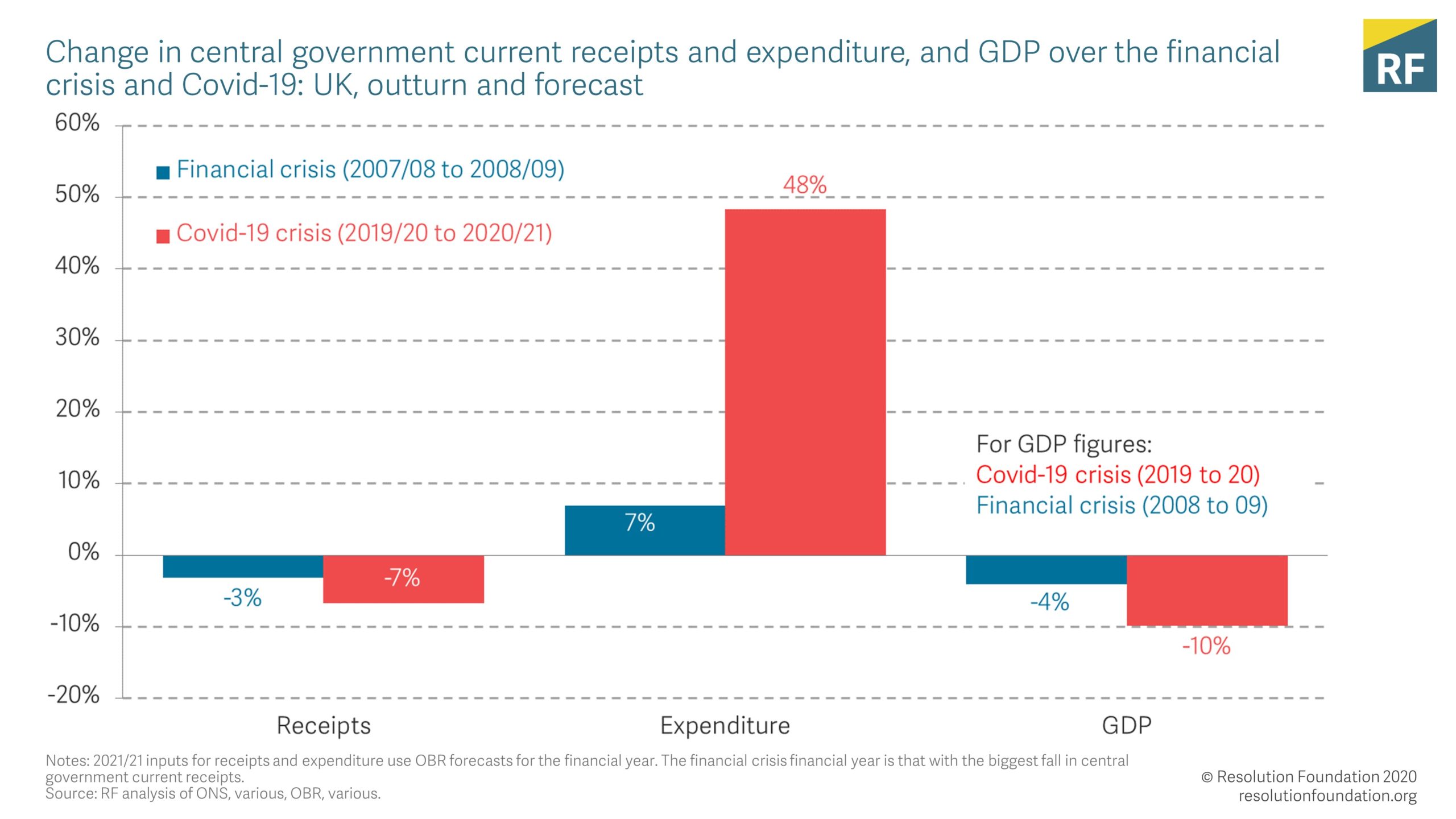