Masks at the ready team. Arms out for the flu jabs, but hands down for the junk food. A year on from entering Downing Street, Boris Johnson has not only become a daddy (again) but he’s ended up fully embracing the nanny daddy state. The latter at least is a surprise given the PM’s personal liberalism, but I guess it’s just another reminder that whatever you went into politics for, events are going to decide what you end up spending your time in power doing.

Speaking of how you spend your time, an excellent use of it would be getting involved with an event we’re holding next Tuesday on how our time use has changed over recent decades. On that question, the short answer from some fascinating research is… a lot – but not in the shorter-working-hours, more-leisure-time way that is often claimed. Come along – it’ll be time well spent.

Have a great, and time well spent, weekend.

Global Britain. Having been a tad gloomy last week, let’s start with some perk. If you haven’t already, read Tyler Cowen’s nomination of the UK as the country making the biggest contribution to tackling the pandemic. His argument: we’ve done rubbish health response-wise, but “the best life-saving medicine, and the best candidate vaccine, both come from the U.K”. Fair point, well made.

Asking (not) a lot. Big news in gender equality progress. A surge in women at the top means they now account for a massive… 18 per cent of the top 1 per cent in the UK, according to a recent paper. Up from 14 per cent in 2000. Why the increase? Bigger rises in the time spent in full-time education for women. In related news of slightly more relevance to the other 99 per cent of us, new research quantifies the ‘ask gap’ in hiring via data from an online job portal. Women ‘asked’ for over three per cent lower salaries than men for the same jobs, and ultimately saw a pay gap of just under two per cent. And the ‘ask gap’ matters – when the jobs portal adjusted to auto-filling the ‘ask’ salary this gap shrank to nearly zero. And no, it didn’t affect the number of jobs women were offered.

Vive la (lefty) France. For some light relief from the UK’s left suing each other, this long read on the (marginally improving) fate of the French socialists is worth your time. It argues that a partial revival in local politics and alignment with the Greens may be their answer to forming a broader left coalition to take on the liberalism of Macron, or the nationalism of the right. A new third way if you will. They’ve even got a name for this green-tinged social democracy – “la social-écologie”. See what they did there? The piece overdoes the case for Parti-socialiste optimism (well done, not totally disappearing), but the broader point is that coalitions (“within” not always “between” parties) rather than a far-left Podemos/Five Star/Corbyn surge might be the future of the (election winning) left. Who knew.

Depreciating depreciations. In the good old days, leaders facing tough economic times were told they could at least tank/depreciate their currencies to boost exports (by making them cheaper). But IMF research suggests that for many developing countries the whole currency down, economy back up thing generally doesn’t work. Imports do become more expensive but exports don’t rise much. Why? Because lots of trade contracts/prices are pre-agreed in advance and, crucially, are often in dollars, so they don’t become cheaper when your domestic currency depreciates. Worse, if your firms also borrow in dollars then a depreciation actually makes it harder for them to service debts. You can watch the IMF’s event on this research or, if that’s too much time to use up, check out this GIF-filled Twitter thread from Soumaya Keynes.

Whose New Deal? Between Biden and Boris, appeals to Roosevelt’s New Deal have been pretty ubiquitous over the past few months. But a forgotten architect of America’s infrastructure revolution of the 1930s was ex-social worker and first female cabinet secretary Frances Perkins, who is often absent from narratives around the New Deal. This long read puts that right, with an insight into her life and work. And if that wets your appetite, some economic history of a very different kind is provided by publication of John Kenneth Galbraith’s 1973 proposal to split the Harvard economics department in two. The goal? To stop the orthodox mainstream and heterodox challenges upsetting each other. Good to see nothing much has changed.

Just because the surface is still, doesn’t mean there isn’t movement underneath. This is an important lesson for catching fish AND understanding UK inequality, as Chart of the Week – one of 40 from our annual Living Standards Audit – shows. On the ‘surface’, inequality – as measured by the Gini coefficient – has been relatively flat (and high) in recent years. But under that headline some eddies are rippling. The poorest households have fallen further behind middle-income households, with the 50/10 ratio (i.e. how many times the incomes of the bottom the middle has) hitting new records. But inequality hasn’t risen in part because the middle has also caught up slightly with the top (the 90/50 ratio of top to middle incomes is below its eve of crisis peak). What’s going on? First, middle-income households have gained more from the pre-covid jobs boom than (already ‘fully employed’) higher income ones, and from falling earnings inequality. Second, huge welfare cuts have been concentrated on the poorest households, taking their incomes back to levels last seen at the beginning of the century. Maintaining the first trend while avoiding a return to the second is the task post-covid. 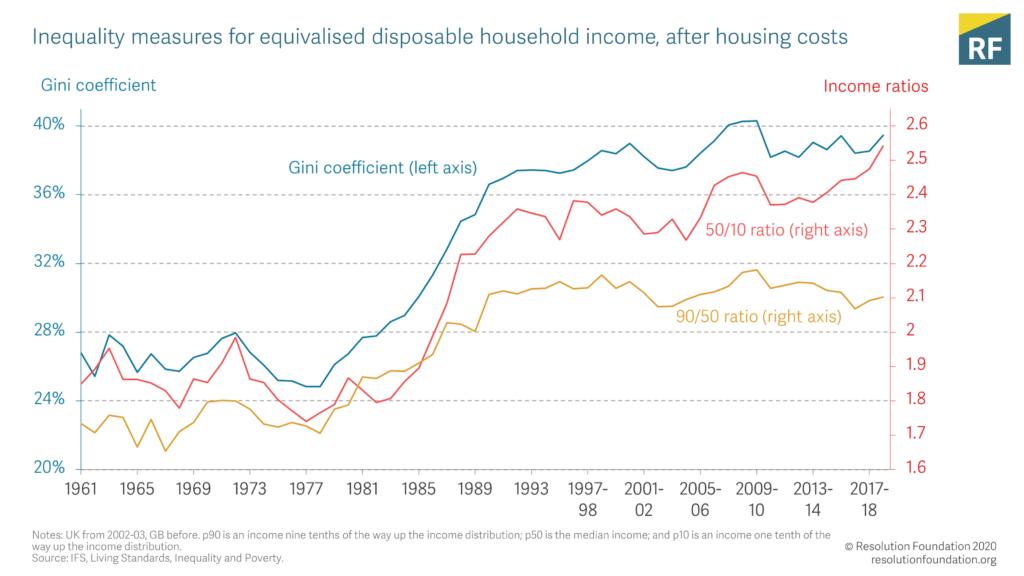