How huge should tax cuts be is the one and only big debate in the Conservative leadership contest so far. No, wait a second, there’s also the one about who can use which toilet. So that’s the big challenges facing the country sorted…

But the contest still has almost two months to run and it’s important to believe that progress is possible, so we thought we should do our bit to help with a TOTCs special focused on lessons for the candidates about the country they aspire to lead. If five lessons aren’t enough then you can read the Interim Report of the Economy 2030 Inquiry for the 150 page version…

Obviously it’s not just the leadership election hotting-up, so stay cool and have a great weekend heatwave.

It’s splendid you want to run the country. Successful societies value public service, all the more when they have major challenges to overcome – which is where our United Kingdom finds itself in the 2020s. But genuine public service is a serious business, even if that may not have always been clear in recent years. Here’s five clues to what being serious about the country you seek to lead might look like.

Lesson 1: Face up to the fact that Great Britain is in relative decline.

We’re a great country – the clue’s in the name. But we are also one in relative decline. That’s uncomfortable for politicians to admit, but doing so is the crucial first step in doing something about it. Saying “world beating” over and over again doesn’t help turn around the reality that the world has been beating us over the past 15 years. Most advanced economies grew more slowly post-financial crisis, but we’ve seen half the productivity growth of the 25 richest OECD countries. Having almost caught up with the economies of France and Germany from the 1990s to the mid-2000s, the UK’s productivity gap with them has almost tripled since 2008 from 6 per cent to 16 per cent. When some people idiots tell you this doesn’t matter because GDP doesn’t feed through to ordinary people’s living standards show them this chart – weak growth is the reason real wages saw no growth over ten years in the 2010s, having grown by an average of 33 per cent a decade from 1970 to 2007. 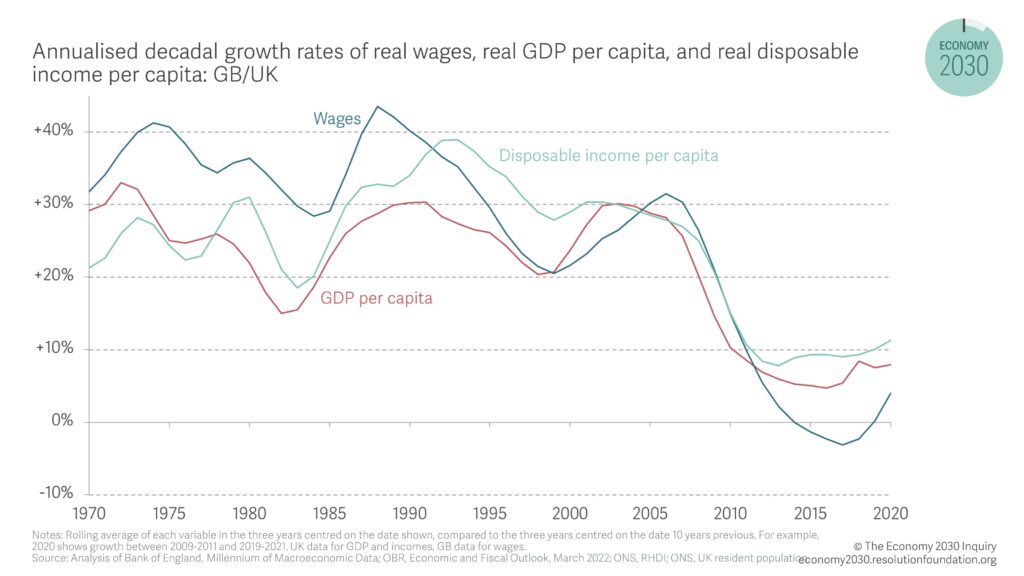 This relative decline is why UK households are so poorly prepared for the cost of living crisis that will dominate at least your first year in office. And it’s why you’ll inherit a British state managing to combine the highest taxes in decades with record NHS waiting lists.

Lesson 2: Your task is to address the toxic combination of low growth and high inequality

In recent years more Conservative thinkers and doers have come to recognise that high inequality is an economic and social problem, and rightly so: UK income inequality is higher than in any other large European country. ‘Levelling up’ recognised that huge gaps exist between places as well as people: income per person in the richest local authority – Kensington and Chelsea (£52,500) – is 4.5 times that of the poorest – Nottingham (£11,700).

High inequality and low growth combine with disastrous result for middle- and lower-income Britain and younger generations. Our rich are still richer than the rich in most advanced economies, but everyone else – the middle class as well as the poor – are falling behind. The squeezed middle in Britain is now 9 per cent poorer than their counterparts in France. Low-income households in the UK are now 22 per cent (or £3,800) poorer than their French equivalents. 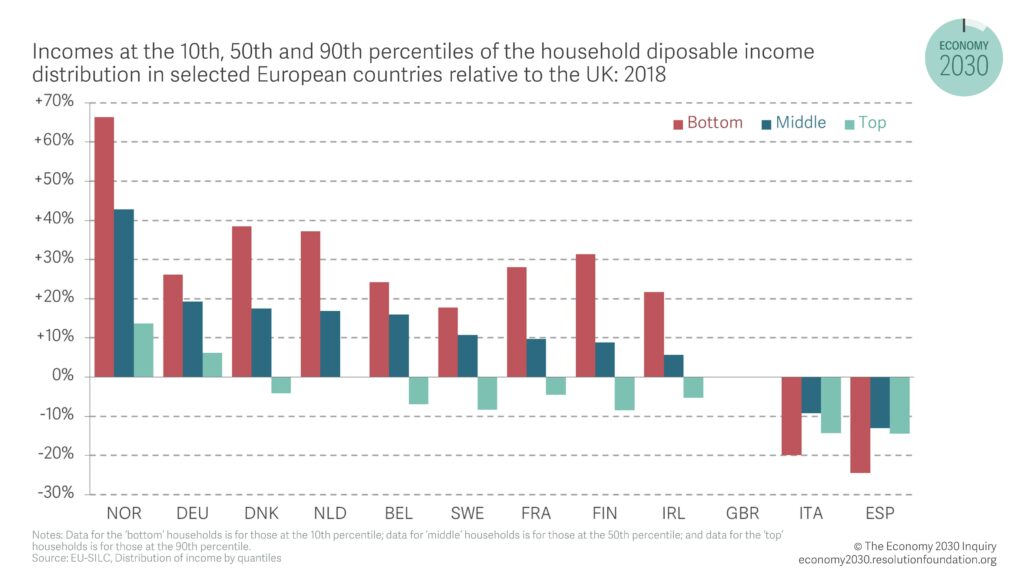 Lesson 3: There is no short cut. We have to be serious about the nature of our economy, and where growth will come from

The scale of the economic challenges we face leads some to look for some silver bullets, or silver linings, to solve our problems. But life is harder than that. Tax cuts won’t end our productivity stagnation: growth isn’t low because taxes are high, taxes are high because our growth is low. Brexit, whatever it’s wider economic/democratic pros and cons, won’t lead to a manufacturing revival. More home working will improve the well-being of high earners, but won’t lead to people living in Lincoln and earning London wages. And the net zero transition will have less impact on GDP than either its opponents or proponents suggest. It’s just crucial to saving the planet.

Instead we need to get serious about the nature of our economy and how to make a success of it. We need to stop thinking we’re all about banking, and wishing we were all about manufacturing. The truth is we’re a broad-based services superpower – musicians, architects, programmers and scientists, as well as bankers. Your predecessors as PM haven’t wanted to celebrate it, but we’re the second largest exporter of services in the world. 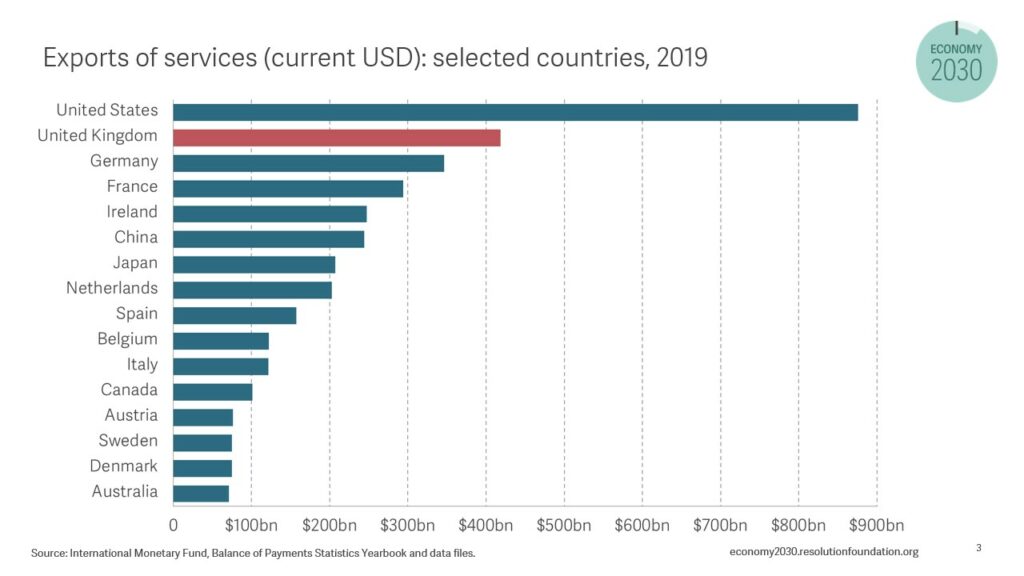 This isn’t going to change, because countries don’t swiftly shift what they are good at: of the top 10 products the UK was most specialised in back in 1989, seven were in our top 10 in 2019. So, we need to make a success of it. That should drive how you prioritise new trade deals, reject worries about ‘too much education’, rethink corporate tax to encourage investment (including in intangibles) and turn levelling up rhetoric into reality. High-value service industries thrive in cities, but we’ve failed to ensure that enough of our large cities outside London capitalise on that fact.

Lesson 4: We’ll need to be as hard headed about getting inequality down as growth up

While most people know our high inequality is neither economically or democratically sustainable, we’re simply not serious about what it would take to turn that around. You should be. Businesses mouth warm words about ESG, while half of shift workers receive less than a week’s notice of their schedules. Politicians worry our benefits system is paying some to sit idle, as the number of families experiencing destitution reaches one million. We put taxes up on the same younger workers confronting stagnant wages, while cutting them for landlords and pensioners.

Not all jobs will exist everywhere, whatever politicians promise, but good jobs should. The minimum wage shows we don’t have to choose between high employment and high standards. Low earners are around three times more likely to experience contract insecurity or volatile hours or pay than higher earners. Higher wages in non-tradable parts of our economy such as social care or hospitality bring with them trade-offs in terms of higher prices, but that is what more equal (and often richer) countries look like.

Each new crisis sees us patching up the welfare state rather than ensuring it is fit for purpose in the first place. The basic level of benefits is now just £77 per week – only 13 per cent of average pay, the lowest on record. Pre-pandemic almost one-third of households with a disabled adult were in poverty, as were nearly half of families with three or more children, up from one-third in 2012-13. There is no route to lower inequality, nor decent society, that accepts this status quo.

You have choices to make about the exact size of the state, but don’t kid yourself there’s a route to a much smaller state that has any popular support given our ageing society, rising healthcare costs, and the new fashion for more defence spending. Remember it was cutting defence from 8 per cent of GDP in the mid-20th century to around 2 per cent today that allowed health/education spend to grow in the past. So, by all means cut a few taxes but spend as much time focused on giving us some better ones. The bi-partisan fashion for raising National Insurance has been a disaster, it’s time for a new approach recognising that wealth has risen from three to almost eight times national income since the 1980s, while wealth taxes have not risen at all as a share of GDP. 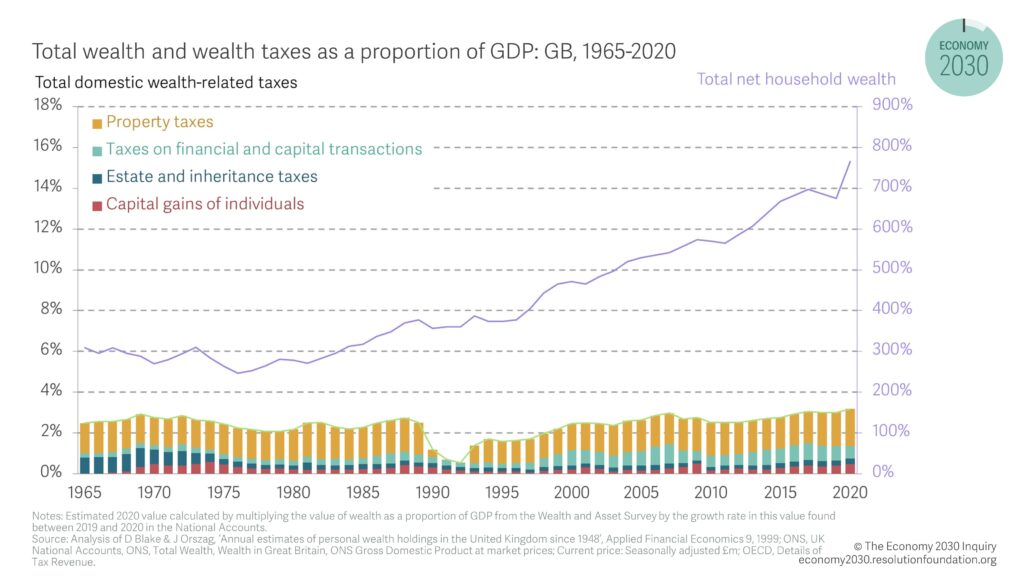 Lesson 5: Catch-up is perfectly possible – but very far from automatic

Now I’m sure you’re thinking none of this sounds easy. That’s true. Some will point to evidence of slowing growth at the global frontier, arguing the status quo is the best we can hope for. But such gloomsters ignore the one benefit of our recent relative decline: we have huge catch-up potential. Many countries that we used to compare ourselves manage to be much richer, and substantially more equal, than us. The task isn’t to become as equal as Norway and rich as the US, it’s to make steady catch-up progress by moving in a north westerly direction in the chart below. 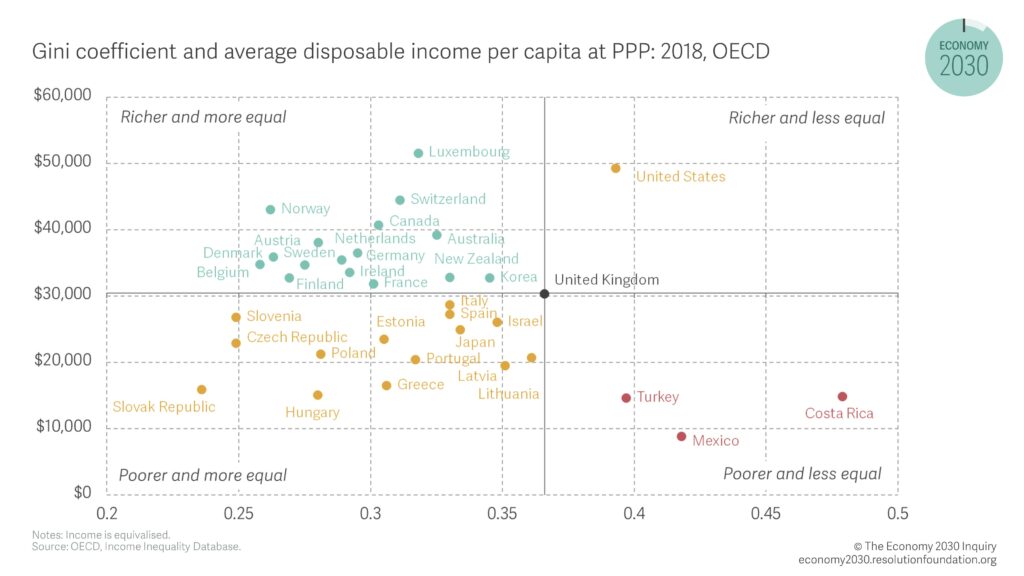 The prize for doing so is very large indeed, especially for low- and middle-income Britain. Think of a set of what we’d always previously have considered peer economies to the UK: Australia, Canada, France, Germany, and the Netherlands. We are now 21 per cent poorer than them. They are also all more equal. If we just matched their inequality levels, it would raise incomes for the poorest fifth of the country by a staggering over 20 per cent. If we matched both their income and inequality levels incomes would rise by £8,800 per household for the British middle class. 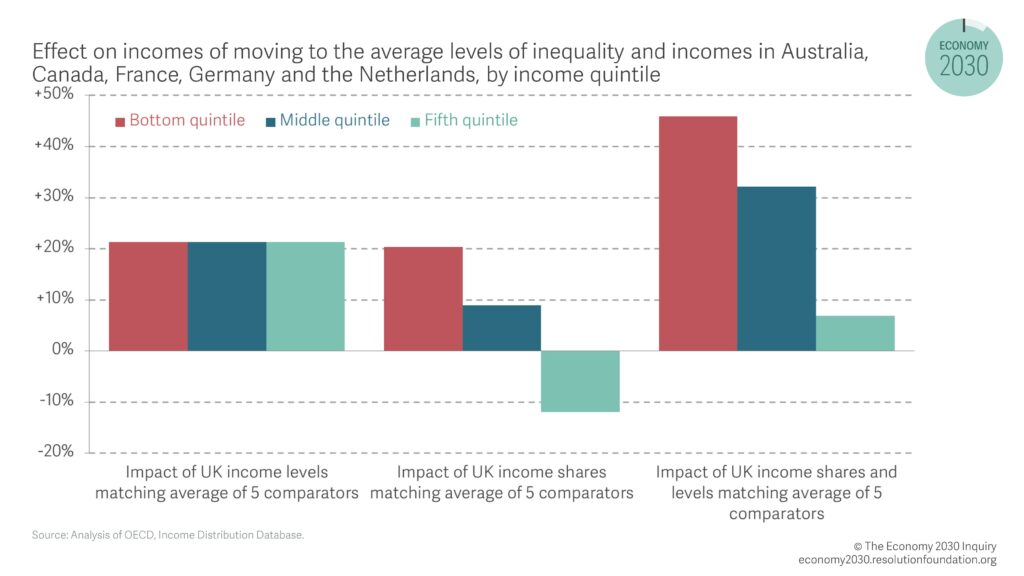 That is the prize, not for transforming the UK into a paradise of American productivity and Scandinavian equality, but from the hard but achievable task of building a better Britain – which is after all what I’m sure you came into politics to do.