This week TOTCs comes to you from a Welsh mountainside of the vertically upwards variety. Now, this isn’t the perfect place for perusing economics reads, but you’re either committed to ‘levelling up’ or you’re not.

These giddy Welsh heights also allow for some perspective on this week’s Brexit “it’s done but not over” speeches. Look beyond the popular British Bulldog vs Brussels bureaucrats narrative and we think there’s much more for agreement than the noise implies. The EU wants “common high standards” – not for us to stick to their rules. In return, we want sovereignty – but not lower standards. A deal, ladies and gentleman, is there to be done.

If you could sort that before we’re off the mountain that would be appreciated. And if you’re on a roll, this week’s reads continue the deal-making vibe – from fixing capitalism and American politics, to social care and the patriarchy. Chop chop.

Concentrating hard is what the Competition and Markets Authority is going to need to do. They’ve been tasked this week by the government to produce an annual assessment of how competitive UK markets really are – with the first one due this summer. This is a good idea – the government doesn’t currently have a view on whether our economy is getting more or less competitive. But it’s also really hard to do. To see why have a read of their own summary of what we already know. It shows (as we found ourselves) that big firms do have more market share today than they had in the early 2000s. Britain’s 100 biggest firms account for nearly a quarter of total British business revenue, up 25 per cent since 2003-4. But concentration has actually been drifting down since 2010-11. And each market is different. Suppliers are anxious about the market power of big supermarkets, but consumers aren’t. High street clothing has become more concentrated among a few companies – because internet retail has become less so. There’s some serious head scratching to be done.

Rubbish politics. Harvard economist Kenneth Rogoff is worried that we’ve all watched too much West Wing. Why? Because those (including RF and ECB President Christine Lagarde) arguing for more active fiscal policy naively assume we have our own Jed Bartlet – the West Wing President with the perfect technocratic answer to any complex policy problem. He’s of course right that political tax and spend decisions are messier than central banks moving interest rates. But he’s wrong to assume that the tortuous fiscal policy decision-making process in the US is replicated elsewhere. UK governments with decent majorities can get things done. What’s more, he underplays the change involved in getting central bankers to do more heavy lifting through negative interest rates (abolishing cash). So, while we don’t have Jed Bartlet, we shouldn’t give up on our politicians just yet.

Mind the gap. Time flies – we’re three years into UK employers having to publish their gender pay gaps. The Financial Times this week brought us the bad news that every single government department currently pays men more on average, and that this gap has actually widened over last year in four departments. But we thought it was a bit of a negative take. Firstly because most departments have seen reductions (well done DWP for having a zero gender pay gap). But also because the experience in Denmark (study written up here) showed that reporting reduced pay gaps by 7 per cent. More women got hired and promoted. Perhaps surprisingly overall wage bills actually came down, as men saw smaller wage rises – a silver lining for CEOs embarrassed about publishing their gender pay gaps stats. Unless they’re male.

Glasgow casting. If you’re also off up mountains this weekend listening is much safer than reading… so listen to this great Trade Talks podcast on the rise and fall of shipbuilding on the Clyde, and what that’s meant for Glasgow over the last century.

Female budgeting. Sticking north of the border, 29-year-old Kate Forbes MSP made history yesterday as the first ever woman to deliver a budget in Holyrood. Obviously this is mainly because the man who should have been doing it resigned in disgrace, but it’s still a moment. So what did she announce? This excellent summary by The Fraser of Allander Institute has the answers. There is more cash to play with, thanks to the UK government’s big spending increases back in September, and the SNP administration is prioritising the NHS. But it has also chosen to borrow more to soften the blow from the economy performing pretty poorly over the past few years, with the outlook for the next few years also looking less rosy. The tough choices can wait for after next year’s election.

Caring Wales. Tough choices are coming in Wales though. A report commissioned to look at the cost of adult social care suggests that costs are set to rise by over 85 per cent by 2035. It’s a similar story across the UK, but the Welsh are ahead of the UK game in suggesting tax rises to cover the costs of rising social care. Increases in income tax, a new social care levy or different fees are all being looked at. Matt Hancock, Secretary of State for Health and Social care, told an RF event yesterday that he’d publish plans for social care in England later this year.

Back in the mid-1990s, Britain had a big problem with workless households – it’s where the majority of poor adults lived. But today the huge majority of poor adults, almost 7-in-10, are in working families. Working poverty is a central feature of 21st Century Britain. This has led some to conclude that if poverty is the question, work is no longer part of the answer. But while we do need to do more to increase the quality of work, new RF research shows conclusively that that is the wrong conclusion. Work does reduce poverty – the risk of being in poverty halves when someone enters work. Another conclusion, highlighted in this week’s chart, is that working poverty is in flux. The good news – half of those in working poverty exit over a three-year period. The bad news? A similar proportion of people fall into it. Poverty isn’t about a totally disconnected group at the bottom of our society – it’s the lived ups and downs of a larger group of households on lower incomes who spend parts of their lives in poverty, and who policy makers need to do more to support. 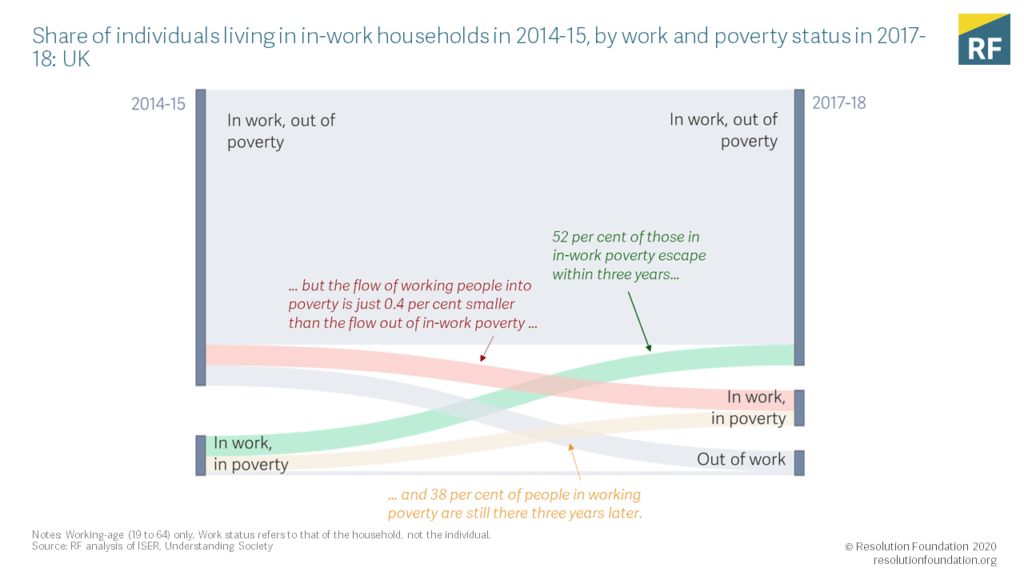