All quiet on the Westminster front. Or at least it will go quiet in the very near future – hence the current outrage being very loud as the week comes to a close. Which is a shame because the week started so well with (part of) the country pulling off a million to one turnaround against an opponent that was in a dominant position to claim victory.

Boris Johnson obviously thinks he’s got a Ben Stokes’ Ashes style performance in him for the closing stages of the Brexit negotiations. The only problem is it’s not clear anyone else in Europe has ever been very interested in playing cricket…

This week we’re taking you away from the noise in Westminster, to hang out with bankers in Wyoming and fertility clinicians in Seoul.  Have a great weekend. And batten down the hatches for the days and weeks ahead.

In a hole. Last week the world’s central bankers had their annual get together in Jackson Hole, Wyoming. The theme this year was “challenges for monetary policy” – shorthand for “we haven’t got much ammo left to boost our ropey economies”. Traditionally excessive central bank confidence now risks flipping into total (or at least too blanket) pessimism. Here’s an example – a paper from ex-central bankers at Blackrock not only (rightly) concludes that central banks can only do so much in terms of cutting interest rates and more QE, but goes further to say that governments cannot use traditional fiscal policy (ie spending increases or tax cuts) to fill the gap either. They conclude we need more radical policy options, like central banks creating money to directly fund government spending. Now there may be a future in which such an approach is necessary, but not in present day UK. After all, if we’re learning anything about the new government it’s that they are very gung-ho when it comes to splashing the cash….

Pounds and pence. The exchange rate matters for your wages, not just your holiday costs. We bang on about this a lot given the impact that sterling depreciations have on inflation. But there’s a puzzle: if the depreciation is pushing up prices here in the UK, it should also be pushing down prices of UK exports abroad, meaning we should sell more of them. So why isn’t that happening? New research (paper here) shows that the impact of the fall in the pound depends hugely on the currency in which our firms price their goods. Where exporters charge foreign customers in sterling, their prices did fall. But where they are invoiced in another currency, UK firms actually left their prices unchanged and increased profit margins – meaning no boost to competitiveness in foreign markets, and no expected boost to export volumes. But wait, two-thirds of our goods are priced in sterling – so something else must be at play. It could be that our exporters aren’t investing in new kit to produce more. Which is fair enough given they’ve no idea of the terms under which they’ll be selling into our biggest export market…

Broader horizons. We require those out of work and claiming benefits to look for work. Most economists agree this helps maintain a high employment economy, but they can also be anxious about the types of jobs people end up doing. That’s where a very practical suggestion (summary here) from a group of economists comes in. Building a tool that pulls together what jobs are available in a local labour market with data on which jobs require similar skills to each other, they are able to provide job searchers with information on alternative occupations they might want to consider. The low-cost tool has been tested and led to job seekers considering a wider range of jobs and, crucially, the longer-term unemployed getting invited to more interviews. This admirably concrete piece of research is well worth our own Department of Work and Pensions paying attention to.

Geordie Shore Generation. Did we mention that millennials are having hard time living standards wise? Oh yes we have, via the RF Intergenerational Centre. But is it all doom and gloom? New RF research takes a regional perspective on living standards trends across birth cohorts and finds some interesting nuance – after all we compare ourselves to our immediate predecessors where we live as much as to peers across the country. First, the good news. Young people (aged 26-28) in the North East today are earning 13 per cent more than those born 15 years earlier. In contrast, young people in London and the South East are earning less than their predecessors were at the same age, with overall regional pay gaps closing as a result. The bad news? Young people in Yorkshire and the West Midlands are actually less likely to be in work today than their predecessors were, despite the UK currently experiencing record employment. Sounds like a policy priority for their respective Metro Mayors. Over to you Dan and Andy…

Ageing away. We’re always keen to focus on what policy is and isn’t working. For years South Korean leaders have been spending billions on trying to get their population to have more kids. It’s not going well according to new data… The country’s fertility rate – the number of expected babies per woman – fell to 0.98. This is the lowest among all OECD countries and compares to a rate a little over 2 that a country needs for a stable population. The result is that Asia’s fourth-largest economy is expected to age faster than any other country. The lesson for governments is partly that us pesky humans have preferences on the number of kids that are hard to shift, with interesting recent research highlighting that in low-fertility countries like Korea women are much more likely than men to be opposed to having another child…

Practice makes perfect, so the saying goes. Which may be the best argument for just keeping going on and on with the Brexit negotiations. In a highly influential book, Malcolm Gladwell argued 10 years ago that the key to perfection, be it at sport or a musical instrument, was putting in 10,000 hours of practice.

“In cognitively demanding fields,” he argued, “there are no naturals.” This argument rested on a 1990s study that focused on the differences between simply good and the very best violinists, which argued that the gaps could be explained by sheer volume of practice. The conclusion? Talent per se is overrated and a Protestant work ethic would pay off.

This was always slightly worrying for me – having put in a moderate amount of violin practice as a youth but been consistently catastrophic – but gave meaning to the lives of sports and music teachers everywhere.

But 25 years on, new research replicates that study with improved techniques. It still finds that practice makes you a better violinist, in particular helping explain gaps between less accomplished and good performers – but it certainly cannot explain all the difference between the simply good and the very best.

Personally, this is very reassuring – parental genes can take at least some of the blame for musical failure. More generally, we can conclude that yes, practice matters, but maybe not quite as much when you’re at the top of your game. There, some actual talent comes in handy.

Chart of the Week
We only focus on the most important issues here at RF – the cutting edge of economic research. So obviously the big news this week was the latest data on what new babies are being called. Here’s some exclusive RF analysis. The names we call our kids are becoming ever more diverse (having a weird name like Torsten stood out in the 80s – now everyone’s at it). The percentage of babies given a name in the top 100 has decreased every year since 1996 – falling from 67 to 45 per cent. But while the range of names are growing, in some ways diversity is falling. Girls’ names are becoming more similar sounding – 68 per cent of the top 100 of them now end in a vowel. In marked contrast only 25 per cent of the top 100 male names do so. Why might this by happening? Maybe we’re following other languages that are familiar with word endings signifying gender (Juan/Juana). Or maybe we’re all a bunch of gender stereotypers, giving our girls soft-sounding endings to their names while boys names are brought to a less fluffy stop? We aren’t the first to notice these kinds of trends – boys names ending with an N apparently surged in the US across the 20th Century. 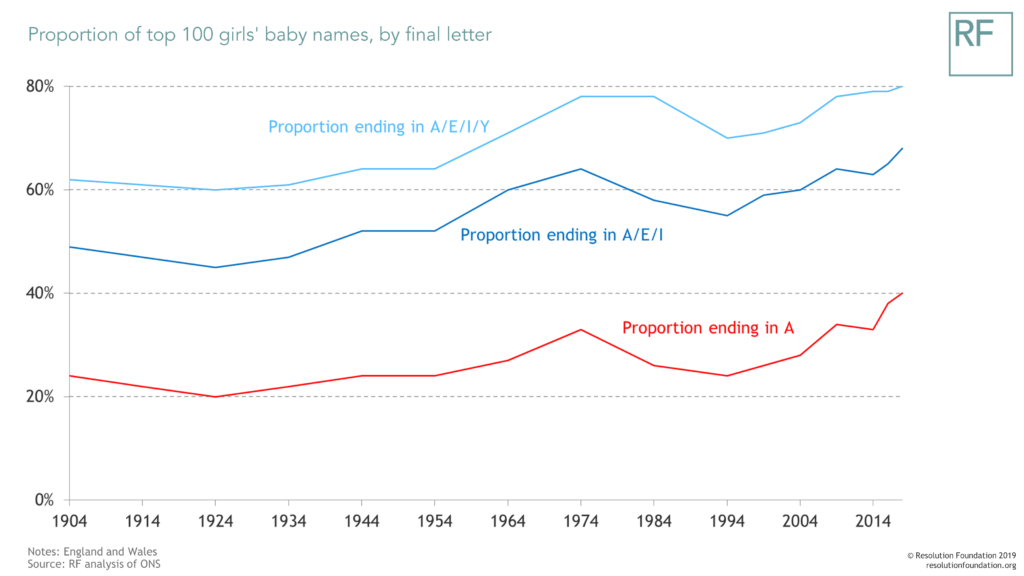