And no, I haven’t got a clue what’s going on either. Well, that’s not quite right, given it’s pretty clear what’s going on is a colossal failure by us and the EU to sort something in both of our economic and geo-political interests. But I’ve got no clue where this mess ends up. That’s despite having a natural advantage in trying to grapple with the PM’s rather convoluted “it’s like twins being forced to have the same haircuts” explanation of the crux level playing field disagreement. As an identical twin I’d make two points. First, just worrying about similar hair slightly misses the point that you’ve got the same eyes, nose, height, build, voice and childhood traumas. And second, that painful experience teaches me that mutually agreed hairline divergence is often the best path for good future relations (although with male twins they end up pretty much in the same, follicly-challenged, place anyway).

My handling strategy for the days ahead is to root for sanity, while starting Christmas drinking a fortnight early to cope with the madness. This week’s reads are a reminder of the big non-Brexit challenges policy makers are being distracted from by the current chaos.

Have a good, if highly uncertain, weekend.

Destitute Britain. You did not want to be poor in Britain in the pre-Covid years. That’s the central conclusion of an important report from our friends at the Joseph Rowntree Foundation on destitution. Note this is distinct from poverty measures based on relative incomes, instead focusing on how many of us go without the essentials we need to eat, stay warm and keep clean. Around one million households experienced destitution in 2019, a 35 per cent increase since 2017. The scale of the increase is bigger than I’d expect, but the overall picture fits with our own work that has highlighted the disgrace of incomes of poorer families actually falling in the pre-pandemic years, largely due to benefit cuts.

Zero carbon. When the UK’s independent adviser on tackling climate change releases a 448-page report you should probably read (some) of it. The Climate Change Committee’s (CCC) Sixth Carbon Budget report sets out lots of new detail on the UK’s pathway to reach Net Zero. The big change target-wise is that emissions must fall by almost 80 per cent by 2035 vs.1990 levels. The basic argument is that we’ll need to do the heavy policy decision taking/tech development in the 2020s to allow the 2030s to be the decade of real emission reductions (e.g. sort the path to electric cars this decade, before banning petrol/diesel-based vehicles in 2030s). The scale of change required is staggering, but the CCC have some optimism to bring: they’ve redone their modelling of the economic impacts of the investments required to deliver this change and conclude that higher UK investment and lower fuel imports might mean UK GDP being two per cent higher than it would have been by 2035. Under these headlines of good news are big negative impacts on some places, firms and people from change on this scale – something we’ll be starting a new research programme on next year.

Forward not back… is Martin Sandbu’s plea to policy makers post-Covid in a new long read for the IMF that urges them to embrace and shape change. His overall take is that post-crisis we need to be embracing much more planning of the direction our economies are on – which obviously follows directly from the change required by net zero above. And that is a big change from the economics of the 1990s onwards. The piece is also worth a read as a summary of his recent book Economics of Belonging – or you can watch the RF event discussing it with Martin a few months back.

Commuting history… is more interesting than ubiquitous claims that we’re currently seeing commuting being consigned to the history books. To get your dose of that history check out research (summary) using data on London between 1801 and 1921. The obvious bit of the argument is that the invention of the steam engine drove the separation of workplace and residence. But the important point for what comes next is that the specialisation of places (i.e. the city centre for production, and outskirts for residential purposes) drove both economic and population growth. The researchers estimate that removing the entire railway network in 1921 would have reduced the total population and rateable values of Greater London by 30 per cent and 22 per cent respectively.

Job killing. Between April and July 2020, unemployed Americans got $600 a week benefit – as a form of Pandemic Unemployment Insurance (UI). The impact of this big increase has triggered a detailed debate – with some arguing it cost jobs and others that it was a triumph. Who is right is relevant to the huge American row now taking place about a second package of fiscal support. Helpfully Noah Smith has summarised the research and concluded that the Pandemic UI was… the best government program the US has had in decades, decreasing poverty and boosting consumption. He debunks recent arguments that the Pandemic UI killed of millions of jobs, by paying workers to stay at home. As Noah notes, given that everyone knew this cash was temporary it makes no sense to think it would discourage them looking for work given they’ll want some income tomorrow. The conclusion? Support for the unemployed didn’t cost jobs. It cut poverty and we need more of it, not less, in the US right now.

With the end of the pandemic finally in sight, there’ll be a lot of pondering over what will return to normal vs. what will permanently change. This is obviously pertinent in terms of people’s working patterns (is the office dead? No) and the types of jobs people do (will people ever pull pints again? Yes). Our tip – rear-view-mirrors are a better guide to the future than crystal balls. But it turns out there’s more to life than work, so this week’s Chart of the Week, courtesy of new ONS data, highlights other key lifestyle changes. The fashionable new hobby for higher income households is…sleeping and resting. Having massively upped this ‘activity’ during lockdown, they’re now snoozing as much as low- and middle-income households. Well that’s one inequality ended at least. And the whole nation it seems is into self-improvement, with time spent playing sport and doing gardening and DIY up on pre-Covid levels. Let’s see how that lasts when the pubs, sports stadiums and nightclubs fully reopen… 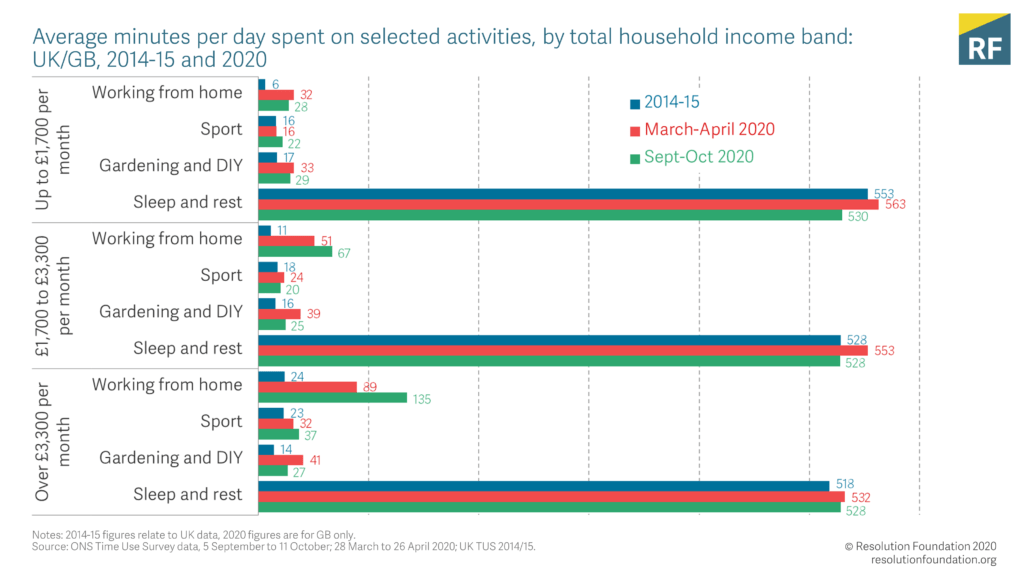