Hope everyone had a decent Easter break. I’m a massive fan of this whole sun shining thing: Britain’s a good place to live.

Unfortunately, our politics and economy haven’t quite got the Briton rocks message. The Queen’s 96th Birthday should have been a good time to celebrate ideas of public service and duty, but the mega row about exactly how the PM broke the law, and whether the nature of any lying was acceptable or not, is less conducive to that kind of celebration.

Economics-wise, today brought news that consumer confidence has slumped to the lowest levels since the summer of 2008. Inflation scaring British consumers is also why the IMF expects the UK to grow slower than any other G7 country next year. Those who don’t trust what consumers say or economists forecast can just look at what people are doing: buying less, with retail sales falling 1.4 per cent in March. We may get through the next 18 months and tame inflation without a recession, but with the news currently coming in no-one should bank on it.

On which happy note, have a great weekend.

Anti-vax viewing. In the olden days (February), sticking lateral flows tests up your nose and needles into your arms was all the rage. Loads of us queued for vaccines – but not everyone. There are good and bad reasons some didn’t. On the bad list goes “because they watched Fox News”. That’s the conclusion of research examining the effect of different news channels on vaccine hesitancy in the US. Counties that had higher viewership of Fox News reported lower vaccination rates. An extra hour of Fox news a week per household hit vaccination rates by 0.35-0.76 per 100 people. Luckily the Fox News effect only exists for those aged under 65 – the oldies took the higher chance of actually dying more seriously than the views of loony shock jocks who flirt with fascism.

Tempting teachers. I spent about a decade as a school governor, where the biggest stress was finding/keeping decent teachers. That challenge remains with a 23 per cent fall in applications for initial teacher training. This is part of the reason the Government is proposing bigger pay rises for those new to the profession (raising starting salaries to £30,000) but much less for experienced staff (who are set for real-terms cut of 14 per cent between 2010 and 2023). The next challenge is retaining them. Policy makers have tried to address this with a scheme that boosts the pay of maths/physics teachers by £2,000 for the first five years of their career if they remain teaching in state schools. And a new evaluation says this worked: the chance of them leaving during the scheme fell by 23 per cent. The cost per each extra teacher retained was 32 per cent lower than training a replacement – a triumph. Unless you teach English…

Gradual growth. File this under techy but important. Textbook growth theory has long-run economic growth coming from increases in (total factor) productivity that it is assumed will generally grow at a constant percentage each year (i.e. exponentially). Against this benchmark we’re in a global productivity slowdown as the percentage growth actually seen has been falling rather than constant. A fascinating new paper (free here), however, argues all this handwringing is simply the result of a misunderstanding: productivity growth is not exponential but linear (i.e. it grows by a constant amount, not a constant rate). This might be because new innovations add to our knowledge stock rather than multiplying it – so over time productivity growth rates will decline as we add the same number of new innovations to a growing stock each year. What this model of growth has going for it is that its predictions of linear productivity growth fit the data much better than the exponential model. What it has going against it is that if this is true ever-slowing growth is what the future has in store. Blooming marvellous.

Revision rewards. Spring/summer means sunshine for most of us, but it means exams for university students. New analysis from our friends at IFS examine how much your degree class matters for future earnings. Getting a 2:1 rather than a 2:2 is associated with earning £3,800 more five years after graduating – worth skipping a night out for. But how much grades matter varies a lot: better grades do more for men (their premium for a first over a 2.1 is double that of women), those at selective universities or studying subjects that generally lead to higher earnings (a 2.1 boosts your earnings a lot if you’re reading economics/law vs a 2.2, but diddly squat if English is your subject). All useful information for students with a big decision to make: how to balance sun-bathing with revision.

Interesting ideas. The latest issue of online magazine Work in Progress is worth your time. London lovers and haters will enjoy a reminder of the (foiled) 1960s plan to cover the capital in motorways. And there’s an interesting (if not totally persuasive) argument that we might wrongly be concluding that good ideas have become harder to find (the generally accepted reason for the slow down in breakthroughs) when the real issue is we’ve got worse at finding them (e.g. because housing costs are limiting the concentration of researchers in our big cities and researchers are increasingly sucked into academia). What is persuasive is the important insight that even if progress in some areas has got harder, that doesn’t mean we can’t do better than we currently are in generating ideas. Fatalism is for fools.

For light relief from partygate, the PM’s left town to secure more donations  trade with India. It’s worth the trip, with Resolution research showing an FTA with India would be a big deal for Britain – because India is both a fast-growing AND relatively closed economy. Furthermore, the growth in trade with India is focused on services which, as we’ll show next Thursday, the UK excels at exporting generally despite underperforming when it comes to India. Over the past two decades India’s share of our services exports has increased by 50 per cent from 0.8 to 1.2 per cent. But what’s grown faster? Our service imports from the sub-continent which, as COTW (h/t @BruceReuters) shows, have surged, trebling their share of our total service imports (from 1.2 to 4.2 per cent since 2001). The result? India is in the very unusual position of having a (in fact the biggest) surplus in services trade with the UK (generally a net exporter of services/importer of goods). It’s still far from certain whether the proposed UK-India trade deal will happen in 2022 as planned, but it deserves more attention than it’s currently getting. 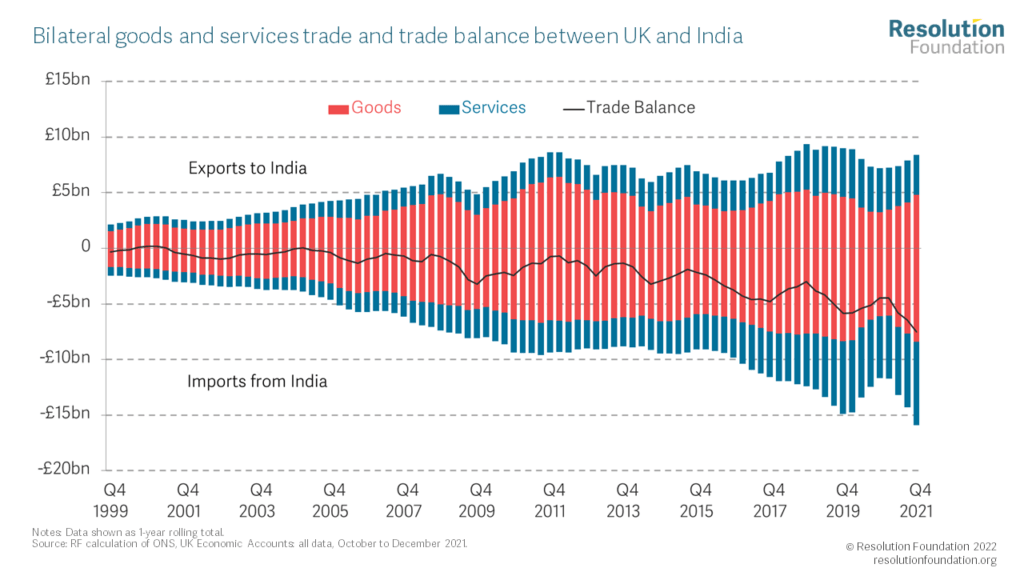