The people of Chesham have spoken. Turns out it’s harder to have a relationship with two people sets of voters at once than the Prime Minister has always hoped. Especially if you’re building a train line right through their back yard.

Anyway, I’m looking forward to all the long reads explaining what’s going on in this left-behind part of Britain. Journalists/the metropolitan elite can tell us how they braved the Metropolitan line to investigate the complex sociology of long building Chiltern discontent. Vox pops of people railing against the decline of once proud places and the struggles of managing on incomes £3,400 above the national average should keep us entertained for at least ten minutes.

While you wait for those to get written, here’s some slightly more informative reads ranging from Victorian maps and successful revolutions, to the dangers of talking bullshit about bullshit jobs. Have a great weekend.

Austerity Analogies. Why did the public support austerity? Because they were duped by a simplistic but powerful analogy that said the public finances need to be balanced just like household finances, is the answer given by loads of people. They usually then go on to blame the media for spreading the evil analogy and their own side for failing to counter it. This view is handy for those expressing it because it implies there’s an easy answer: “do better comms”. Back in the real world, politics is a bit more complicated than that. Rather proving the point, a new paper (free version) uses survey data to directly investigate the “it was the analogy what won it” claim. The authors find people weren’t duped by a false analogy – instead the analogy was taken up by those who were already keen to get borrowing down. This isn’t just about ancient history – the public don’t want another bout of austerity now but they’re more worried about the public debts built up during the pandemic than either economists or policy makers are.

BS about jobs. The 2018 book “Bullshit Jobs” got a lot of attention (partly due to its potty-mouth title) for arguing that modern capitalism forces ever more of us into jobs that we see as pointless (note the author, David Graeber, means literally of no social value NOT low paid/bad quality jobs). The book itself was rather light on evidence, but luckily new work digs into survey data to see how people really feel about their jobs. The conclusion? The Bullshit jobs theory is bullshit. In the UK, only 10 per cent of workers did not see their work as useful to society, compared to claims that it is anywhere from 20 to over 50 per cent. And this number is declining, rather than surging as claimed. The researchers’ conclusion? That there are very few inherently ‘useless’ jobs, but a lot of bad managers who make workers feel useless (which is VERY bad for our wellbeing).

Resolution’s ancestors. Thinking no one produced high-end living standards research before the Resolution Foundation came along is an easy mistake to make. But the most Resolution-friendly edition of In Our Time ever was out last week to show it’s far from true. It tells the story of Charles Booth, a Liverpudlian shipping line owner who in the late 1800s surveyed households across London to test the claim that a quarter of households lived in poverty. It was in fact revealed to be closer to a third. It features a young Beatrice Webb (before her fame and marriage to Sydney), very Resolution-friendly use of graphics (Booth’s famous maps), the Victorian version of Theresa May’s ‘Just About Managing’ families, and lots more. Highly recommend a listen.

Greener grass. I really enjoyed this economic take on the staggering human progress story that is the Green Revolution (the use of crop breeding to hugely increase agricultural productivity in developing countries in the second half of the 20th Century). Too often, productivity growth only gets talked about in the context of manufacturing, so it’s refreshing to have the scale of agricultural productivity gains – and the economic benefits that have flowed from them – spelt out. High yielding crop varieties increased harvests by 44 per cent between 1965 and 2010. This not only achieved the important objective of feeding growing populations, it had big economic benefits: even delaying this agricultural revolution by 10 years would have reduced GDP per capita in 2010 by 17 per cent. Enjoy reading about some good news.

Board workers. It’s always good to read things that challenge your priors. Which is what a review article on the evidence of the impact of workers on boards (something Theresa May flirted with) did for me this week. Does giving workers more say result in big improvements, or cause the inefficiencies detractors claim? Not so much is the conclusion: worker codetermination results in a zero or very small positive effect on wages, does not reduce rates of people leaving their job, and leads to no or a slight increase in firm productivity. But note the authors argue this could be because countries with worker board representatives already have a culture of worker consultation, and pro-worker institutions (like unions). That’s what I’m telling myself anyway.

Perky economic news this week following the reopening included rising employment and falling furlough rates, while sharply rising prices haven’t put Brits off their shopping sprees. But be careful of the general drift towards people talking as if this is boom time Britain. This week’s Chart of the Week identifies the UK’s ‘Covid employment gap’ – made up of furloughed staff, plus the fall in employees and self-employed workers since the start of the pandemic – and shows how it has evolved during the crisis. The good news – the gap has more than halved between February and May to fall below three million for the first time since the start of the crisis. The challenge ahead – almost three million is a LOT of people who aren’t working as they were pre-crisis. Keep that in mind when you hear stories about the labour market somehow running hot. We’re a long way from job done. 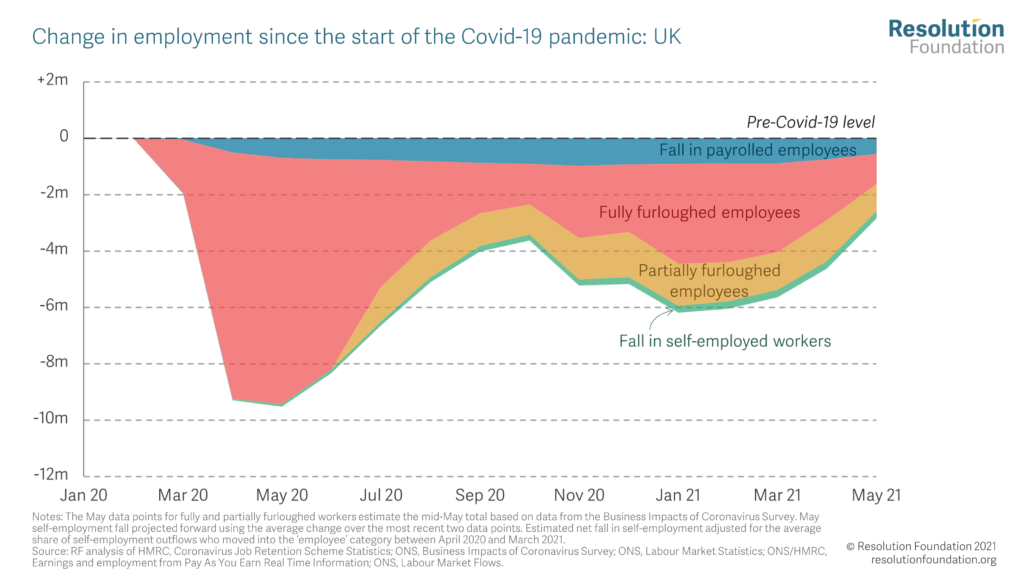