This week’s TOTCs comes from that long neglected and left behind corner of England: Tunbridge Wells. More accurately it comes from a very small cliff nearby.  Despite all my campaigning there has been zero topographical levelling up so this is as good as it gets rock climbing-wise in the South East.

On the rather more important/plausible levelling up topic of our economic geography, I have a question. How has the Government managed to spark a great trainline robbery row despite capital spending rising almost 50 per cent in the early 2020s and transport getting a big share of this rising pie (18 per cent vs. 15 per cent in 2010)? Getting decent headlines when you’re ramping up spending is meant to be the easy bit, so this doesn’t bode well for the hard stuff – actually building some train lines.

Anyway, at least there’s not a wider pattern of managing to turn a significant increase in spending into a combined PR/substance disaster that hammers the North… TOTC’s pattern is of course consistently top reads, which this week roam from monetising your marriage to how ludicrous Brits find meaning in life through their hobbies. Now back to that climbing…

Loving life. What makes life meaningful in different countries is the topic of a new Pew briefing that asks that question of the public across 17 advanced economies. Almost everyone puts family top, but after that it gets interesting. Normally people care about their careers next, although for South Koreans and Americans it’s all about the cash rather than job itself. But the Brits? We think our hobbies are more important than such crass material things… which might explain the whole low productivity thing. See our latest Economy 2030 Inquiry report (and event) for a slightly more constructive/detailed analysis of our productivity problem.

Consistent China. Why has poverty fallen so fast in China, which had rural poverty rates of 96 per cent in 1980, to under 1 per cent pre-pandemic? Not because they were particularly good at translating growth into poverty falls, but because they’ve had shed loads of growth, argues a new study. The mechanisms by which growth led to rural poverty reductions have, however, changed over time – from growth in agriculture itself, to the arrival of other industries and then later remittances from city workers and benefits. It’s the growth, not the inclusivity, that marks communist China out.

Researching racism. The prevalence of racist attitudes and behaviours is all over the news again, this time via cricket. To think through the different drivers of xenophobic behaviour, a recent paper digs into survey data on anti-Chinese xenophobic behaviour in America during the pandemic. Having Covid increased such behaviour in the short term, but not in the long term. Watching Fox News (remember Trump pushed the phrase ‘China virus’), however, led to a more long-lasting rise in xenophobia. What is effective at reducing racist behaviour? Increasing perceptions that racism isn’t acceptable makes more progress than actually reducing racial hostility itself, says the report. Obviously doing both is what it’s all about.

Premium marriage. Marriage is about love, companionship and… higher pay. Especially for men (middle-aged married men in the US out-earn the unmarried by around 60 per cent). Why? Previous explanations focus on the fact that those with higher earning potential are more likely to marry: traits like reliability and intelligence apparently help you make a success of a relationship as well as hold down a job. Who knew. This matters, but doesn’t explain all of the marriage wage premium. This blog argues that another factor is couples combining their incomes, which means they can take more risks in the labour market (i.e holding out for a decent job when unemployed). So remember, marriage is to have, to hold and to climb the greasy poll. Romantic.

Striking lucky. The least constructive career advice is to tell the youth to get lucky. But getting lucky is very important indeed. Obviously, life teaches most of us that. But if you’re not yet convinced, read this intriguing new paper (#@delong). During WW2, sailors on US submarines often got promoted on the basis of whether or not their submarines successfully attacked enemy shipping. But torpedoes used in such attacks until 1943 had a technical flaw meaning whether or not they exploded was fairly random, so luck played a big role in promotions. The author examines how long-lasting the effects of promotions based on being on a lucky submarine were. Very, they conclude, with promoted sailors living 2.4 years longer (note winning an Oscar gets you 3.9 years vs losing out) and dying in areas with 14 per cent higher house prices, on the basis of the higher status and acquisition/exercise of management skills. There is some more useful career advice than “get lucky” in this paper for young economists: the creative use of data no-one else thinks about is the route to great research.

‘Red Wall’ Conservative MPs are having a tough time: their patrician colleagues have been earning squillions on the side while they don’t even get the high-speed railways they were promised. Then along comes this week’s change to the cap on social care costs, leaving poorer households (disproportionately their constituents) paying far more of their care costs than previously expected.

This seemingly techy change now means that councils’ means-tested contributions towards care costs won’t count towards the new £86,000 cap, beyond which you won’t be asked to pay anything. But its impact will be quite profound for some, because they will now never hit the cap, or will do so years later. The intuitive case for the change is that the cap was always about limiting what you yourself pay. But remember we have the means-tested system as well as the cap for a reason: those with fewer assets should contribute less towards their care than those with far more.

Now this will no longer be the case for those with major, long-lasting care needs. Anyone could end up paying £86,000, irrespective of whether that wipes out almost all their assets (down to the last £20,000) or hardly makes a dent in them, as this week’s chart shows. Although this illustrates what happens if you face the very worst case, the shape of who gets the highest proportion of their assets protected generally holds (see James Browne’s helpful tweets for another example).

This change doesn’t mean these reforms don’t significantly improve the social care system: the chart makes that point (showing it’s better than the current disaster for everyone). The new means test is also good for lower-asset areas. But the chart also spells out that the main role of the cap is now unambiguously to protect those with significant assets who, given house price disparities across the nation, are more likely to live in the South than the North. It’s insuring the rich, not levelling up. 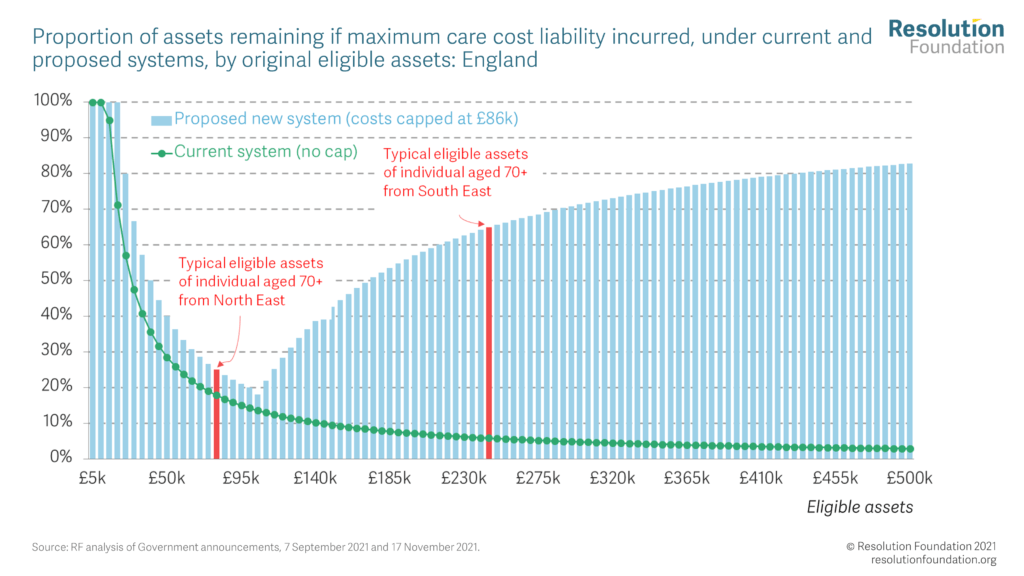