Dishy Rishy has been sloshing the dosh. Again. This week it’s £30bn, a big deal in pre-pandemic land but only a 20 per cent increase on the £160bn already announced since March. All together that’s lots of cash. But no, it doesn’t prove Jeremy Corbyn was always right about borrowing more, or that Sajid Javid is right to warn now about excessive spending. It just proves there’s a pandemic on. You may have noticed. Economic policies are, like risqué jokes, very context dependent.

The real issues with the Chancellor’s approach are two-fold. First, having announced totally unprecedented steps in the lockdown phase of this crisis, he’s relying on much more standard policy in the reopening phase. That might work if a full V-shaped recovery shows up, but it’s a big gamble (not one I’d be taking). Second, there’s not enough pandemic in the policy. In fact, the path of the virus and risks of a second wave were basically absent from his speech. Which is odd, because it’s not just the Chancellor who may be back for more (announcements wise) in the Autumn.

For now, enjoy this week’s reads and have a good weekend all,

So last crisis: An odd turnaround this year is that papers on the financial crisis now seem… (comparatively) cheery. Particularly a new one this week from Branko Milanovic of (often mis-interpreted) Elephant Chart fame. The perky news he brings is that while our focus on the developed world makes us see the 2008 to 2013 phase as dark times, they actually saw big falls in global income inequality because the global financial crisis wasn’t so global after all. Typical household income grew by (an almost unbelievable) 76 per cent in Asia during that period, vs 6 per cent in advanced economies. In fact, all other regions closed the gap to the richest parts of the world, although at very different rates (Asian incomes pulled further ahead of those in Africa). Continued income growth in China explains about half the fall in global income inequality, but income growth of the global top 1 per cent also slowed. The less perky news? The current crisis definitely is truly global. Which brings me to…

PANdemic research: TOTC has spent the last few months understandably focused on research/policy concerning COVID here in the UK. But while countries all confront the same virus, very different impacts and policy challenges are visible around the globe. That’s why a new map of coronavirus-related research on the brilliant Economics Observatory website is a massive public service. It serves up work being done around the world – on the likes of food security in Bangladesh or informal sector in neighbouring India – that we would otherwise miss. Well worth a look.

Not universal: There was almost no discussion of Universal Credit this week. But with over 3.2 million people claiming it since lockdown, it’s been central to many people’s experiences of this crisis. It’ll become even more central as the retention scheme is phased out. So well worth a listen is BBC Radio 4’s half hour feature ‘Your Call Is Important to Us’. The programme follows three people claiming Universal Credit, delving into their lives and experiences (which are anything but universal) while they are on hold to the Universal Credit hotline. Listening to UC users is crucial when thinking about next steps for policy – which is why interviews and survey evidence were central parts of our recent deep dive into how UC is faring in this crisis.

Safety nets. While we’re on benefit systems… George Osborne liked to tell us that we should fix the roof while the sun is shining. He meant the public finances of course, but we should also invert his policy focus to say that it applies to social security too. You should make sure they’re functioning in good times because you have to rely on them in dark times. That’s one conclusion from this paper comparing the US and Australia wage subsidy schemes’ performance in this crisis. A crisis is a lot easier to manage if you have a functioning benefit system to start with.

Lockdown early, lockdown often: Hindsight is a great thing (and I’m certainly claiming no prescience on the issue of lockdown timing back in March), but a new piece of work from economists at the World Bank spells out a lesson we should all have learnt by now: the decision on when to implement a lockdown wasn’t actually a trade-off between saving lives and saving the economy. Using countries’ electricity consumption and levels of NO2 as proxies for lockdown measures, it shows that countries which locked down earliest saw fewer cases of coronavirus AND a smaller economic hit. For example, countries that locked down a week before their first covid death saw a 2 per cent smaller decrease in economic activity than those that locked down on the day of the first death. Returning to the theme of the intro, the lesson is that we really can’t untwine the health and economic aspects of this crisis.

While much of the pre-Budget-in-all-but-name speculation surrounded whether the Chancellor would go for our £500 ‘High Street Voucher’ scheme (sadly we got a £10 Meal Deal voucher instead), the biggest focus on the day was his plan to tackle Britain’s jobs crisis. The Chancellor’s answer was welcome job creation for the young, plus an eye-catching £1,000 bonus per worker for every firm that has furloughed workers and keeps them on until January. Will this significantly reduce how many workers end up unemployed? Probably not. For hard-hit firms (think pubs, hotels, restaurants etc) this bonus is too small and too temporary to make a huge difference, as this week’s Chart show. While the Job Retention Scheme covers 82% of a typical furloughed worker’s wage costs (falling to 55 per cent by October), the bonus only covers 21% for 3 months. Meanwhile for the vast majority of furloughed employees who would have been brought back anyway this new policy is just a form of grant to the firms employing them. Now that doesn’t mean its pure deadweight (some of those firms are among the hardest hit) but it’s definitely not the real answer to the million dollar jobs question we face later this year: how to prevent high and lasting unemployment. 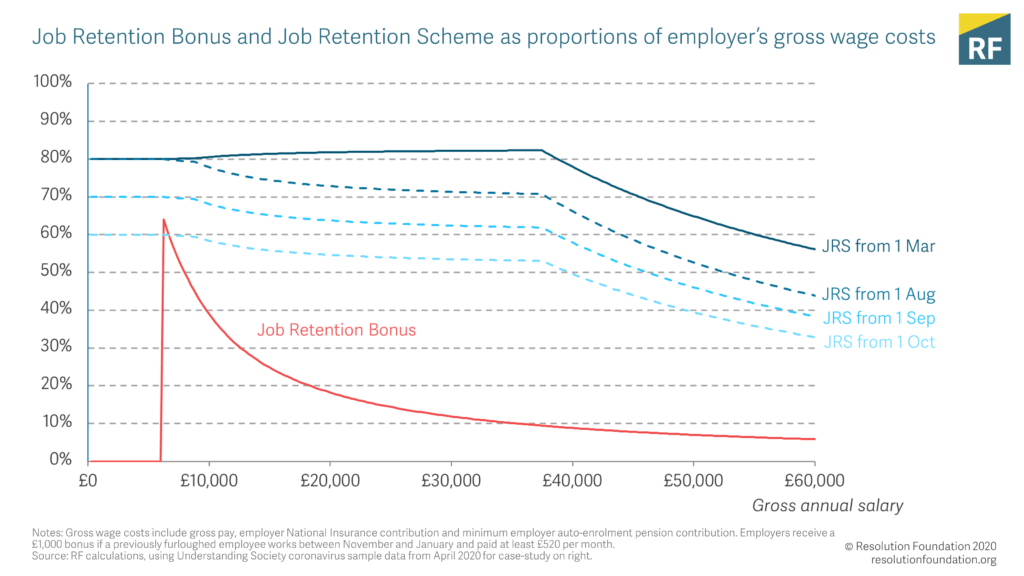