Anyone else feeling slightly inadequate in the face of this Captain Tom Moore guy? He’s managed to raise £18m for the NHS despite being old enough to have been born just as the last global pandemic was winding down in the early 1920s. And I’m pretty sure he’s done more exercise than me over the past week with this 100 laps of the garden stuff.

If you’re lucky enough to have a garden and are planning many laps of it this weekend, you can probably get away with perusing this week’s reads on the move. For the rest of you, best not – social distancing failure is guaranteed.

Have a good weekend all, and stay safe.

PS We’re recruiting – including for someone to work on one of the big challenges caused by this crisis: young people’s job prospects. Don’t just read RF stuff, come write it

You know nothing Jon Snow. One of the features of this crisis is huge uncertainty – about a new virus, the length of lockdown, and whatever comes next. But despite that some people seem comfortable expressing total certainty – they are what you might technically call… idiots. Or Toby Young. As Charles Darwin more elegantly put it in 1871: “Ignorance more frequently begets confidence than does knowledge.” This insight – that overconfidence and a lack of epistemic humility can cause real harm – is the subject of a thoughtful new blog that is well worth your time. Of course this isn’t new: a classic study found 93 per cent of drivers claiming to be more skilful than the median… which is mathematically impossible. The blog has some practical advice for how to practice humility even if you’ve got expertise: spend some time considering reasons that you might be wrong…

Data francais. We held our RF’s first webinar yesterday on the economics of coronavirus – one recurring theme was the importance of learning from other countries on how to fight the virus and run economic policy during these grim times. In the interests of doing that, check out this interesting new piece comparing the British and French experience. It notes we’ve had lots in common: arrogance in the face of Italy’s unfolding health crisis + public anger focused on the same issues (too little PPE, too few tests).  We’ve both unified over our national treasures: the NHS here, the President’s office over there. Bigger differences? Better, and more open, data – think geographical breakdowns – in France. On the economic front the UK has done better/has it easier on the macro side because it doesn’t have the hassle of a shared central bank, while on the micro side the UK has had to do more innovation at pace (i.e. we had to invent our retention scheme unlike lots of the rest of Europe that had existing policies to build on). This may be a more useful French lesson than then attempts at home schooling currently traumatising kids across Britain…

Ordinary aristocrats. Our elites are becoming more ordinary – or more accurately, they’re saying that they are. That’s the takeaway from some unusual new research (summary) examining 120 years of the recreations claimed by the British establishment in Who’s Who. The conclusion? Landed gentry pastimes dominated early on but waned from the late 19th Century onwards (as did the actual landed gentry…). Everything went very high brow/fine arts/opera luvvies during the 20th century, but these days everyone’s claiming more ‘ordinary’ interests like football/pop music/the family. The authors are suspicious types though and argue this doesn’t mean elites are actually becoming more ordinary – they just get that in an era of high inequality it pays to sound like you’re keeping it real. But not too real it appears. Pre-lockdown 40 per cent of current Who’s Who entrants still said they went horse-riding and polo playing.

Housing gaps. This is going to be a controversial read I suspect… We spend a lot of time focusing on the growing importance of wealth in 21st Century Britain – and in particular on the importance of asset price increases rather than savings driving big increase in wealth. Housing is the obvious example, with big wealth increases for those already owning property. But the rates of return on housing differ quite a bit by gender, argues a new paper. Most of the gap is put down to differences in the location and timing of transactions (apparently women tend to prefer to buy in places prices are already high). But even looking at the same areas and periods of time, the authors find that women buy the same property for 1-2 per cent more than men and sell for 2-3 per cent less.

Bad for business. Most of what we’ve shared with you CV-wise has been on the implications for workers and households, but much of that impact obviously comes through the impact on firms. So for two reads on that front you can check out yesterday’s ONS Business Impact of Covid-19 survey with 25 per cent of firms saying they have temporarily closed. For those still trading an average of 21 per cent of their workforces have been furloughed. A new US paper paints if anything a worse picture. Of 5,800 small businesses they find 43 per cent are temporarily closed and that firms have on average reduced their employee counts by 40 per cent. The typical firm also had less than one month of cash on hand, which is not a good place to start given that even when the lockdown eases, the economic pain isn’t just going to disappear.

COTW has a paradox for you. Government is shutting down large chunks of our economy (to save lives) and shouldering much of the cost (to save livelihoods). The result: government debt looks set to surge over 100 per cent of GDP.  Earlier this week we estimated a peak of 106 per cent for a three-month lockdown or 129 per cent in a six-month scenario – levels not seen for 60 years.

Here comes the paradox bit. Concentrate. Our modelling suggests the cost of that debt, even after these huge increases will… fall. Why? Because interest rates have fallen yet again, hitting an all-time low of 0.4 per cent in March 2020 vs the long run average of 4.4 per cent. New borrowing is cheap, and the costs of our old debt also fall as we refinance in future years. So this higher debt doesn’t currently comes with higher costs – but it does come with higher risks. The diamonds in COTW show what would eventually happen to debt costs if interest rates returned to 2.25 per cent (the Bank of England estimate of the long run equilibrium) – the highest debt interest relative to tax revenues this century. Far from unbearable but certainly food for thought. 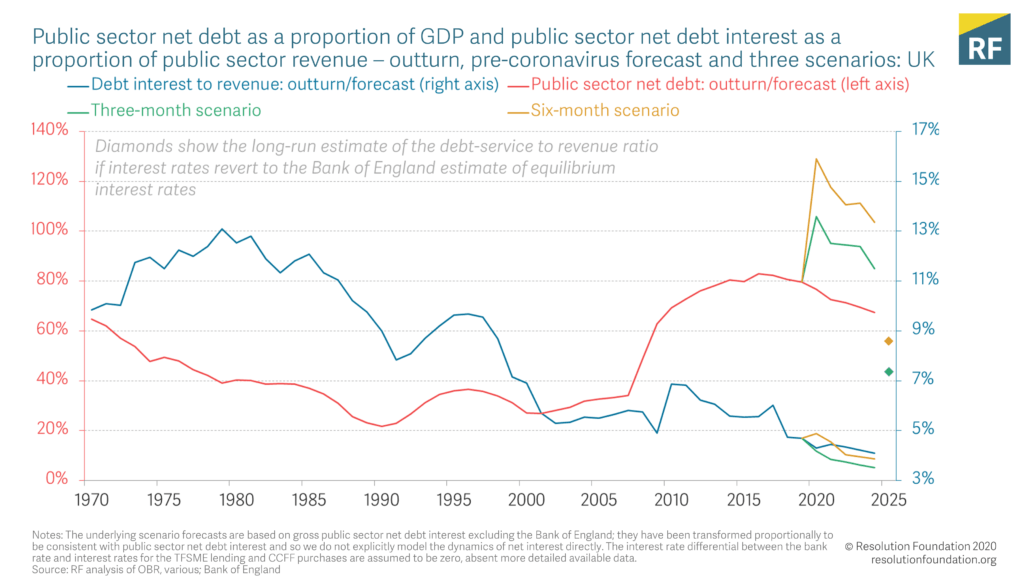