Well that wasn’t the week I was expecting. In so many ways. I briefly thought the importance of policy/decision taking continuity lay behind my seven year old’s surprisingly strong view this morning that Boris Johnson must stay as PM until a successor’s in place. But detailed probing about his constitutional opinions revealed a different underlying concern: someone needs to be in No. 10 to feed Larry the cat.

Personally, I’m more worried about which donor’s going to cough up to take all the arty truly awful wallpaper down. Just like tax cuts, that stuff is easier to put in place than get rid of when you realise it wasn’t a good idea… On which note, since integrity/truth telling is all the rage again, here’s a few for those of you considering running to be our next PM:

Obviously, a serious focus on what it would take to get our economy out of its relative decline is exactly what we do need, as COTW makes painfully clear. Who knows if the hustings ahead will manage that, but I can guarantee that our big Economy 2030 Inquiry conference next Wednesday will – we’ll be publishing the interim report of this mammoth project and discussing it with loads of great speakers. Come along.

Fiscal freedom? Amid yesterday’s madness you’d be forgiven for missing the OBR’s big Fiscal Risks and Sustainability report. But have a read because it’s the important backdrop to the leadership contest ahead. The bad fiscal news headlines are that wars are expensive (other countries ramping up defence spending means it’ll cost £20 billion to remain the second biggest spender in NATO) and energy price surges are too (directly via more spending and indirectly via lower growth). But don’t worry, the OBR aren’t just a bunch of gloomsters, because they also bring good fiscal news… we’re dying younger and having fewer kids than expected, which means smaller demographic pressures on spending than previously forecast. Happy days. Fittingly, given these pressures provide a context to govern in the years ahead we can’t easily escape, the OBR have put together a hostage video format summary from their Chair Richard Hughes.

Tempting Tories is what the candidates to replace Boris Johnson are going to be doing in the weeks ahead. To be more specific, they need to tempt Tory MPs over the next few weeks, before the final two then focus on wooing party members over the summer. At some point they might care what the country thinks. As ever you need to understand your electorate, so I thought it was worth reflagging to campaign teams a paper we covered last year which digs into the differences between the views of MPs and party members. The relevant bit is that Conservative members are actually more like the party’s voters than their MPs are: the electoral representatives are unusually right wing on the economy. So bonkers tax cut promises are likely to come thick and fast as the wooing of MPs goes into overdrive in the next couple of weeks.

Supporting start-ups. All governments love to say they’re backing start-ups. But spelling out which ones is key suggests a great new Bank of England working paper. Examining 1.3 million start-ups across ten European countries, it identifies clear patterns both in the types of start-ups (e.g. some are very capital intensive, others highly leveraged) and their growth/employment/productivity trajectories (e.g. those with high leverage tend to see weaker productivity growth and are more likely to disappear). The punchline is that policy makers should consider policies that try to shape which kind of start-ups they get, for example advocating lower tax rates for larger, capital intensive start-ups but higher rates for others. Worth pondering by whoever ends up as the Chancellor, given our corporate tax system is being reviewed ahead of the Autumn Budget.

Checking on children. Lots of the lasting effects of the pandemic are now pretty clear – like the fiscal cost. But the lasting impact on our children remains highly uncertain. So new stats this week on key stage two attainment (i.e. end of year six) should have had more attention this week because they are our first chance to see where 11-year-olds are at SATs-wise since 2019. A way back is the answer: only 59 per cent of pupils met the expected standard in reading, writing and maths: a fall of 6 percentage points since 2019. Just because the pandemic’s largely over (despite everyone having Covid right now) its effects very much are not.

Strong shareholders. We’ve got a great report out this week examining the long-term decline in worker power in the UK (union membership has more than halved since the end of 1970s – from 52 per cent to 23 per cent today) and contrasting that with little change in employer power. But the power of those that own firms also matters for who gets what share of the value a firm creates. So documents recent research focused on the impact of larger and more concentrated shareholders in the US. The key conclusion is that it leads to both lower wages and employment in firms affected, but not higher productivity i.e. this is purely about changing who gets what slice of the pie. Power matters people.

Our new PM, whenever they turn up, needs to focus on the big questions facing the country. And here they are in one chart, taken from our annual Living Standards Audit. The challenge facing Britain in the 2020s is that we are combining the low growth of the last 15 years and the high inequality left to us by the 1980s. The combination of the two is a catastrophe for low- and middle-income households. Despite people saying GDP doesn’t feed through to the living standards of ordinary workers, you can see the collapse in growth lies behind our flatlining living standards – the typical incomes of the poorest fifth of the population were no higher on the eve of the pandemic than they were back in 2004-05. And despite politicians of all parties saying it’s not healthy that we have such big gaps between people and places, you can also see we haven’t been closing them. Time to get serious about getting growth up and inequality down – we’ll have lots more to say on both fronts next week. 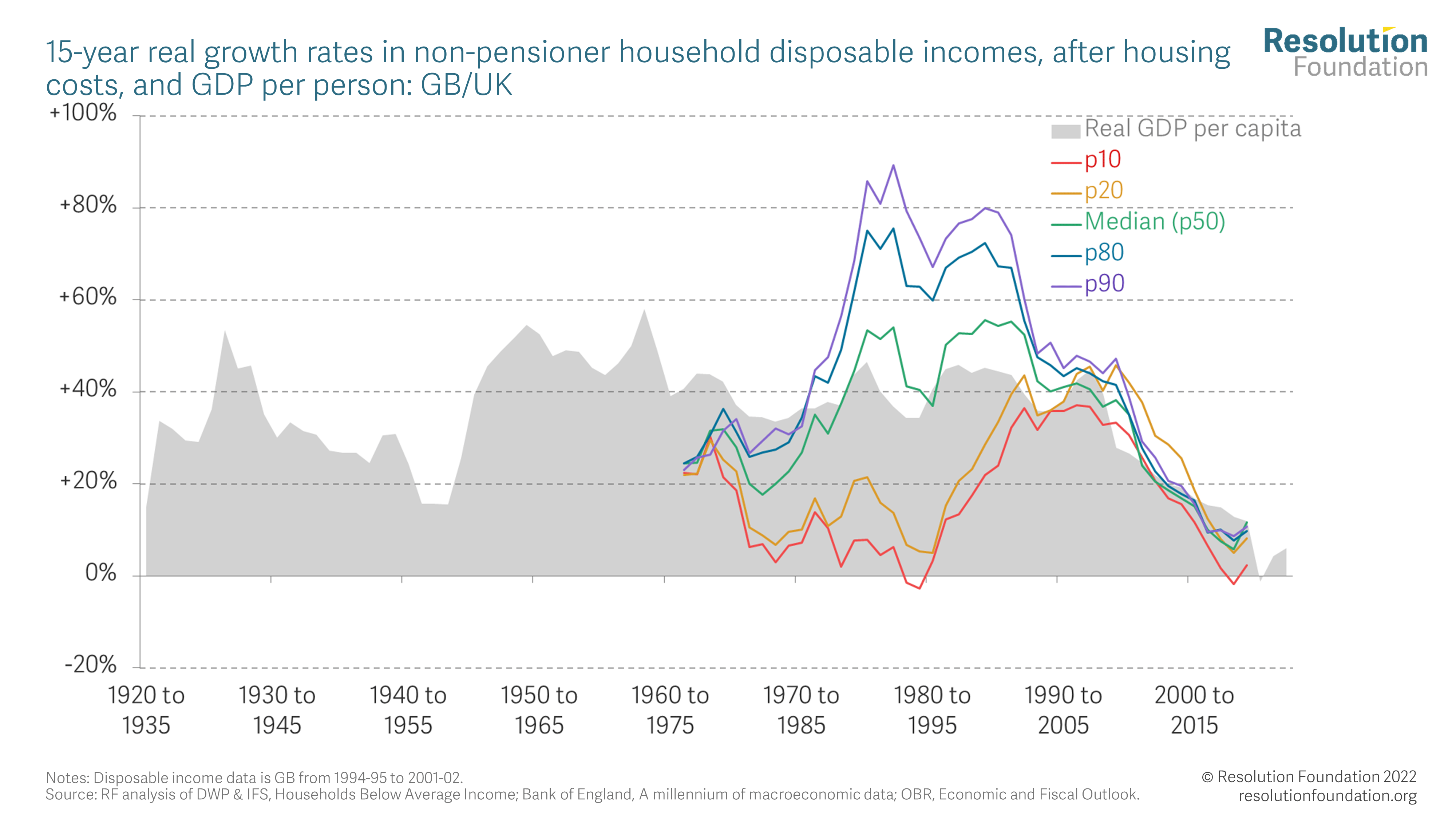