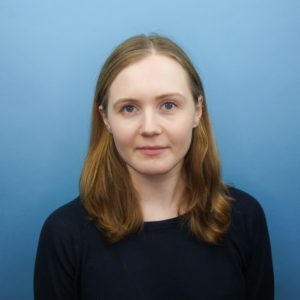 This morning’s labour market statistics, covering November 2022, show a mixed picture. On the one hand, high levels of vacancies and low unemployment mean that the labour market remains tight. But there are early signs that this may not last much longer – vacancies have fallen markedly over the past few months, while redundancies are ticking up – and the cost of living crisis and high economic inactivity cast a longer-term shadow.

There are signs that the labour market is cooling

First, there are early signs that the labour market may be ‘cooling’, as demand for workers starts to tail off. (This echoes weak GDP growth towards the end of 2022, as well as forecasts of a looming recession from both the OBR and the Bank of England.)

Vacancies have now fallen for seven months in a row on the ONS’ headline measure, and now stand at 1.16 million in the three months to November. Vacancies are still above their 2019 average, following a post-lockdown hiring boom – but with a fall of 240,000 (19 per cent) over the past two months in the timelier (albeit more volatile) single-month series, this may not be the case for much longer. The fall in vacancies looks to be mainly a private sector phenomenon, but vacancies in public sector-dominated industries (public admin, education, and health) have also stopped rising. 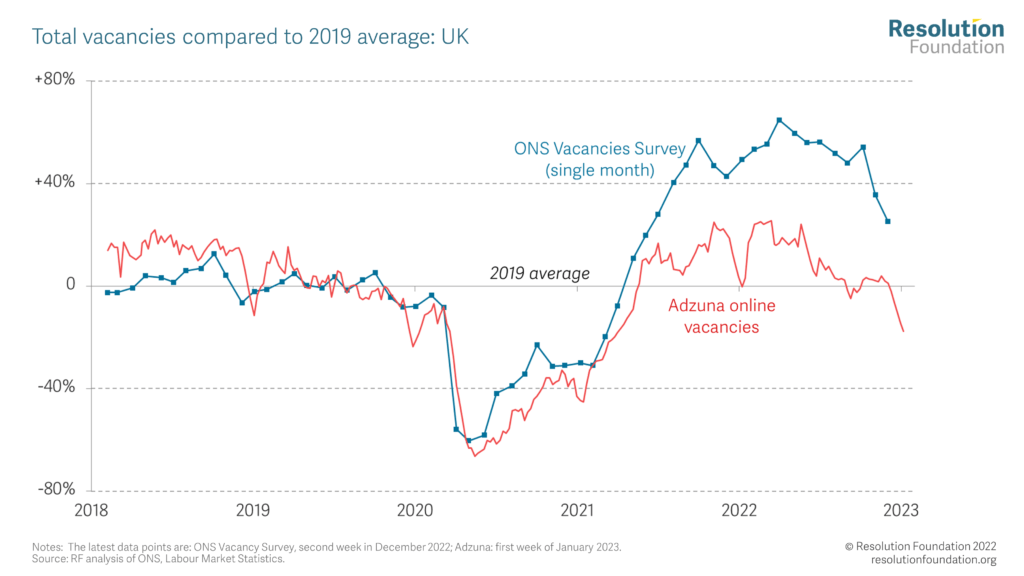 In addition, redundancies have continued to tick up, rising for the sixth month in a row. Again, this only brings redundancies in line with pre-pandemic levels, but this isn’t an encouraging direction of travel. Interestingly, the rise in redundancies has so far been concentrated among men: this could be linked to the fact that the sectors that have seen the biggest year-on-year rises have been finance and real estate, transport and storage, and construction, all of which employ more men than women.

But the labour market remains tight (for now)

In more positive news, these signs of cooling are not yet feeding through into unemployment. The headline unemployment rate was 3.7 per cent in September-November 2022 – close to record lows. The small increase in unemployment in the latest quarter (up from 3.5 per cent in June-August 2022) was entirely concentrated among younger workers: the number of unemployed 16-24-year-olds has increased by 8 per cent, while no other age group has seen a rise. 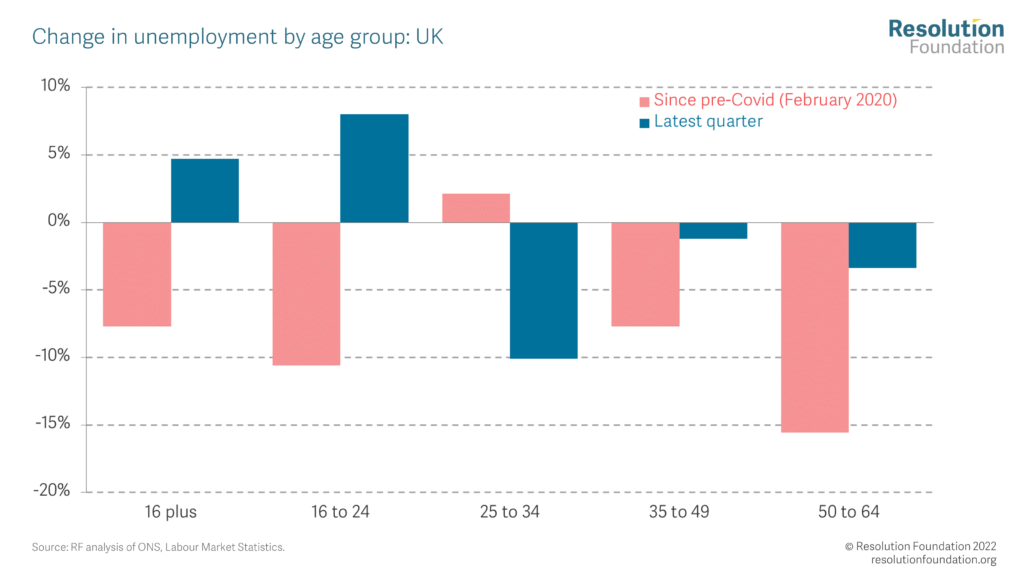 Overall, in levels terms, we haven’t seen big changes yet. The three headline labour market rates – employment, unemployment, and inactivity – have shown only small changes over the past few months. Unemployment is still historically low; vacancies are above pre-Covid levels; and redundancies are at similar levels to pre-pandemic. The big picture is that we have a tight labour market, but with early warning signs for trouble ahead.

This tight labour market is helping to drive strong nominal wage growth. Over the year to November, nominal wages grew by 6.4 per cent across the economy as a whole, and private sector wage growth was even stronger, at 7.2 per cent in cash terms. In both cases, this is the highest rate since comparable data began in the early 2000s (excluding the pandemic period). And the gap between regular and total pay growth has closed – while earlier in the year there were signs that employers were giving workers pay rises via bonuses and other one-off payments, pay growth now appears to be coming through longer-term pay settlements. 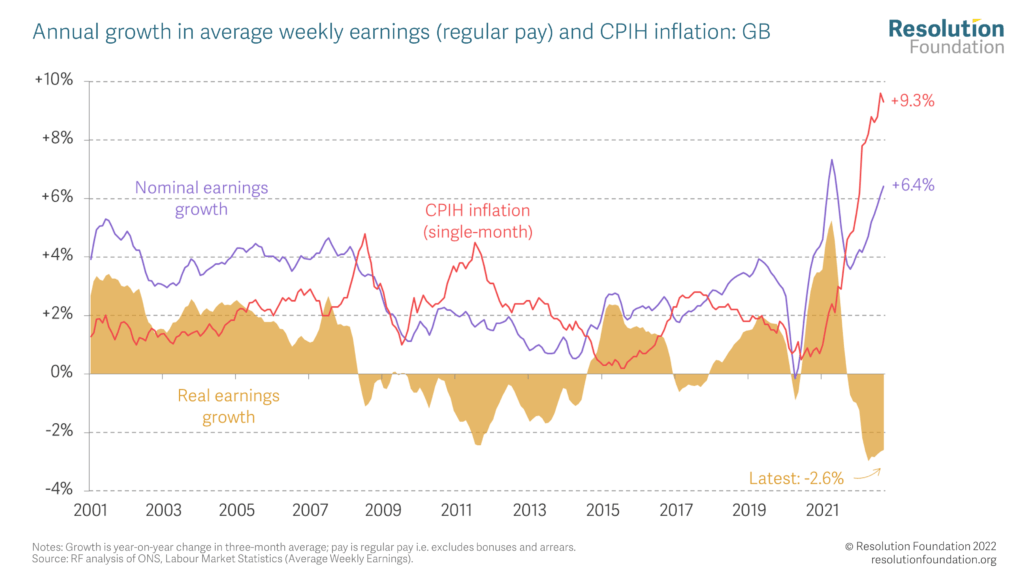 But of course, strong growth in nominal pay will be of little comfort to workers, whose pay packets continue to be eroded by rising prices. In real terms, wages fell by 2.6 per cent over the year to November. And the gap between public and private sector pay growth remains close to record-high levels: real wages fell by a massive 5.5 per cent in the public sector, compared to 1.9 per cent in the private sector. 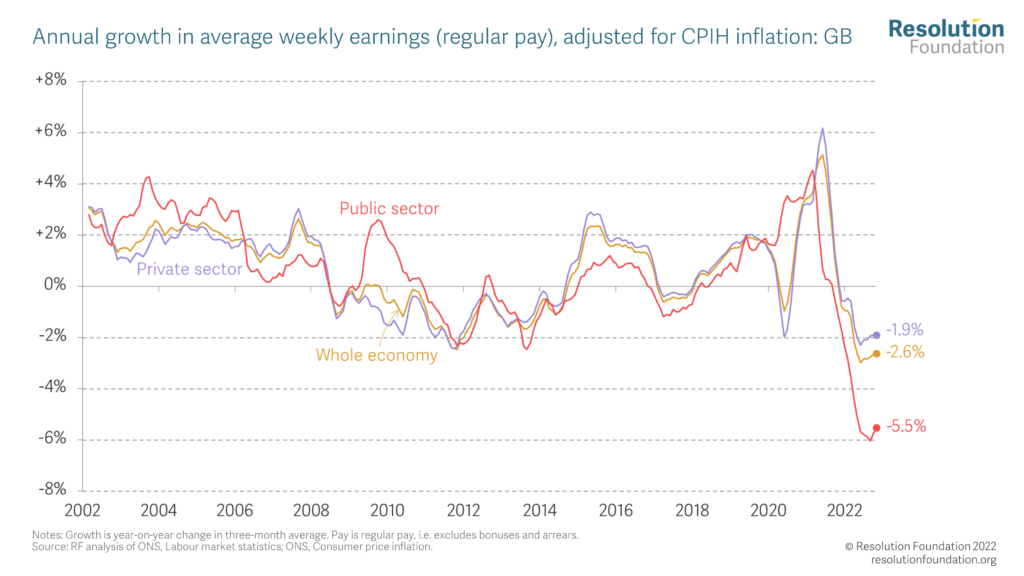 Falling real wages across the board, plus the wide gap in public and private sector pay growth, have been driving levels of industrial action not seen since 2011. In November, 467,000 days were lost to strike action – even before the widespread strikes in December have shown up in the data.

Overall, then, despite early signs of cooling, the labour market remains tight – but we shouldn’t lose sight of the longer-standing challenges. Continuing high inflation means that the living standards squeeze is set to continue in 2023 – and as our latest Living Standards Outlook shows, real wages are not expected to return to their Q1 2022 level until the end of 2027. Economic inactivity among 16-64-year-olds has risen by almost 600,000 since the start of the pandemic, with the increase made up mainly of older workers and those with long-term health conditions (we will be publishing new research on this issue in early February). And with sluggish economic growth, and a possible recession on the horizon, 2023 could mark the end of the labour market being a bright spot in an otherwise bleak set of economic data. Policy makers should celebrate the tight labour market while it lasts.