The big news in this morning’s labour market stats was confirmation that pay is now falling in real terms – the pay squeeze will be one of the defining features of 2022. There is better news on jobs, with falling unemployment suggesting the labour market continues to tighten, but vacancies have fallen from their high point and lower participation looks to be one of the more persistent labour market impacts of the pandemic.

The post financial crisis period has been an era of pay squeezes. Six years of falling real pay after 2008 and slow growth thereafter – including a renewed squeeze in 2017 – meant that by 2019 real wages had only just recovered to their 2008 level. Today’s data confirms that the Covid aftermath will be the third time real wages have been squeezed in just over a decade (if we included the brief furlough-induced squeeze at the start of 2020 it would be the fourth).

In November, annual growth in average regular weekly pay was 3.5 per cent in cash terms. By the standards of the last decade this would normally represent strong growth – nominal annual pay growth averaged only 2.2 per cent from 2008 to 2019. But CPIH inflation of 4.6 per cent in the year to November means real pay growth was -1.0 per cent. 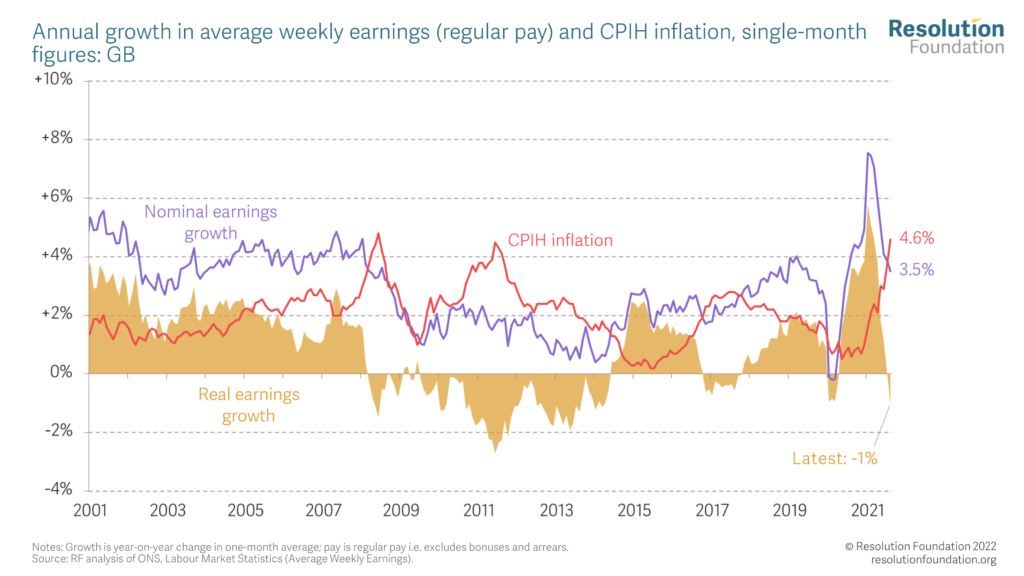 November 2021 will mark the official start of the pay squeeze. But in reality it probably started sooner. Although the furlough scheme is long since closed, it continues to affect pay data, since annual pay growth measures have as their base the period when the furlough scheme was in operation. For example, November’s 3.8 per cent nominal pay growth compares pay in November 2021 to pay in November 2020, when there were 4 million workers on furlough, many on reduced pay. Looking at shorter-term pay growth measures can help look through that measurement problem to some extent. A three-month measure suggests that real pay growth may actually have turned negative as early as May of last year.

The outlook is for a continued wage squeeze throughout 2022. This is firstly because inflation is set to remain high – the Bank of England think it will peak at 6 per cent in the summer, only falling back to 4 per cent by the end of the year, still well above current rates of nominal pay growth (a significant driver of inflation in 2022 will be the energy price rise due in April). But a second reason is that wage growth is unlikely to rise in response. Talk of wage-price spirals forgets that the UK’s low rates of unionisation and collective bargaining mean workers can’t easily secure higher wages in response to higher inflation unless the labour market is tight. On which note …

The labour market is now ‘tight’

Even with unemployment staying fairly low throughout the crisis (the unemployment rate peaked at 5.2 per cent), the millions of workers on furlough meant it was impossible to call the labour market ‘tight’. But with the furlough scheme now over, and with unemployment continuing to fall, it increasingly looks like ‘tight’ is a fair description. The unemployment rate fell to 4.1 per cent in November; until 2018 this would have been the lowest rate since the mid-1970s, but now stands slightly above the pre-crisis low of 3.8 per cent. If nominal pay rises too quickly, it will add to the inflationary pressures coming from energy prices and supply chains.

Other markers of a tight labour market include strong nominal wage growth (by the standards of the post-financial crisis low productivity growth period), and high vacancies. The ratio of unemployed workers to vacancies was 1.1 in September to November last year, compared to 1.6 on the eve of the Covid crisis.

There are signs, however, that the pace of the ‘tightening’ has slowed. The headline vacancies count (from the ONS’s survey) fell in November and December, and the number of online vacancies (as measured by Adzuna) was 21 per cent lower at the start of January than the start of November. This will partly be driven by the impact of the Omicron variant – the fall in hospitality vacancies in December was particularly sharp. 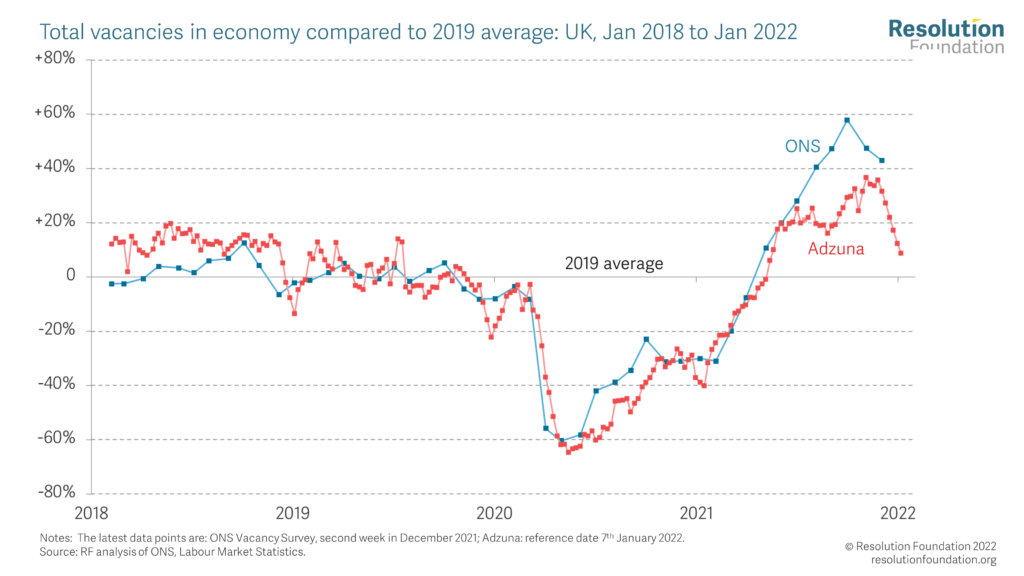 Beyond vacancies, lags in the data mean we won’t see the full impact of Omicron in the labour market data until next month. It’s likely to show up mainly as a fall in hours worked, with many businesses facing either cancellations in the run up to Christmas, and with many workers forced to isolate with the virus. The ONS’s timely business survey found, for example, that in the hospitality sector in December, 44 per cent of businesses faced higher than usual cancellations and 5.5 per cent of staff were not working due to the virus.

But participation continues to be a concern

With cases now falling, the impact of the Omicron variant on the labour market will hopefully be limited. But stepping back, it’s now clear that the Covid crisis as a whole is set to have a longer-lasting impact on participation, which in addition to the pay squeeze will be one of the central features of the 2022 labour market. Participation is down 1.1 percentage points (equivalent to 615,000 people) on February 2020. With inactivity up slightly in the latest data, a recovery in participation isn’t looking likely any time soon. The rise in inactivity has been concentrated among older women and younger men, with sickness and long Covid specifically increasingly looking like important factors. 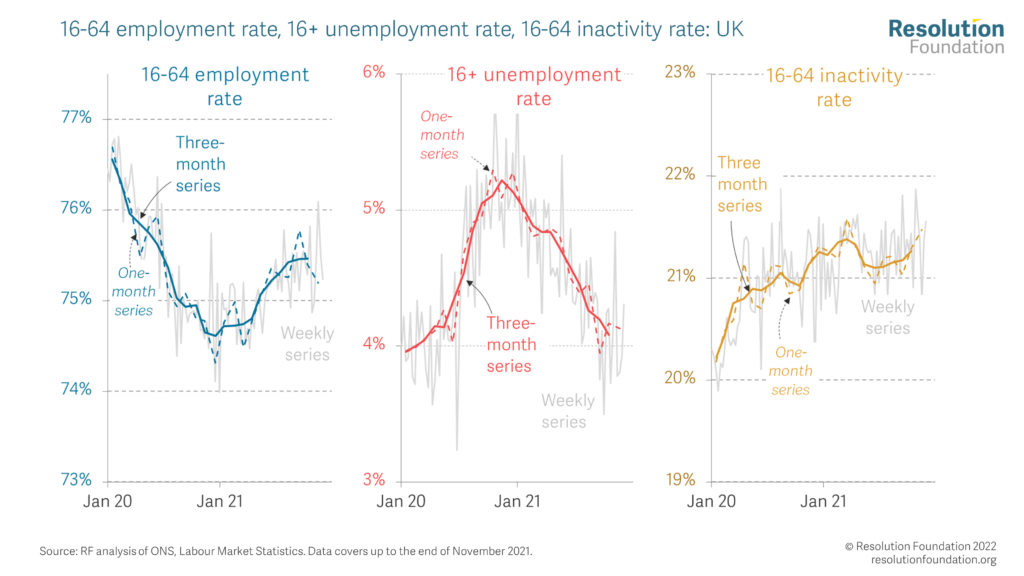 Low participation means that, even with low unemployment, the number of people in work is still well down (minus 536,000) on February 2020. Beware claims of record jobs based only on the PAYE employee jobs data – these don’t include self-employment, which has fallen starkly. Less importantly, the latest PAYE employee data points also tend to be revised down substantially – November’s estimate was revised down by 148,000 in today’s data.

Today’s data gives us a pretty clear sense of the two overarching labour market challenges that the Covid crisis leaves us with – high inflation and a real pay squeeze on the one hand, and lower participation on the other. We will have to see a recovery on both fronts to really put the crisis behind us.