The labour market is tight

The labour market is now very tight on several measures. Vacancies are at a record high of 1.3 million. Unemployment fell again, to 3.9 per cent on the three-month measure, nearing its record low of 3.8 per cent. The ratio of vacancies to unemployment is comfortably higher than at any point in the last 20 years. This tightness is broad-based – vacancies are above pre-covid levels in all sectors, and at record highs in more than half of them. 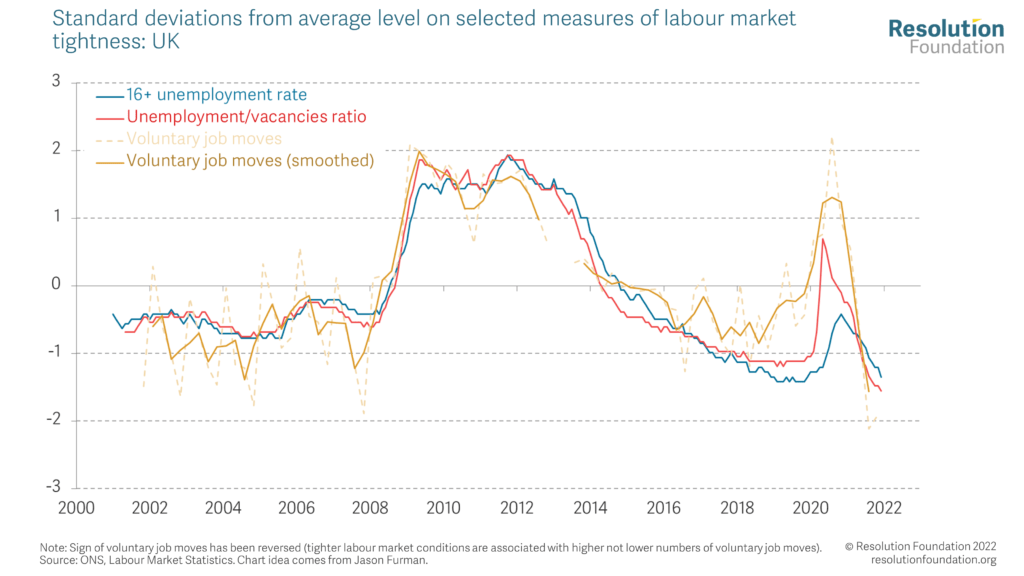 The flip side of near-record low unemployment is sadly not record high employment – there are still 580,000 fewer people in work now than before the pandemic. Instead, there are 515,000 fewer working-age people participating in the labour market. In many labour-market cycles, participation initially falls along with employment, as workers become discouraged by the scarcity of jobs, and then gradually rises again as strong employment tempts them back into the labour market.

But as employment has risen over the last few months in the UK, this hasn’t yet been matched by participation rising again. Furthermore, the type of people no longer in jobs or looking for them – disproportionately older workers – and the reasons they give for non-participation – long term health issues and early retirement – do not bode well for them coming back into the labour market fold any time soon. 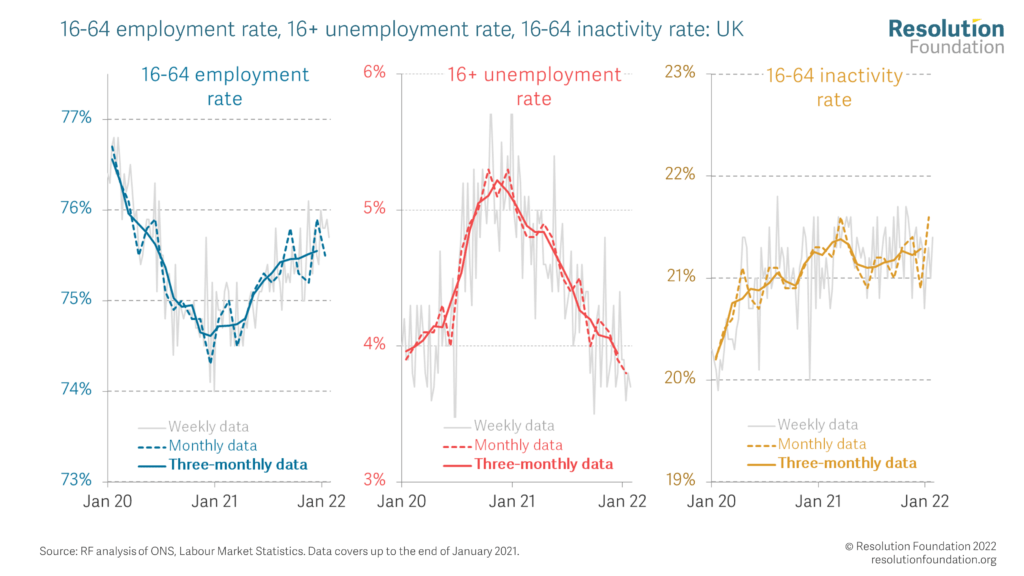 Real wages are also weak and going to get weaker

Nominal wage growth of 4.1 per cent in the 12 months to January is healthy by recent standards – perhaps even too healthy, as we discuss below. But it is being more than eaten up by rising consumer price inflation – annual CPIH inflation was 4.9 per cent in January. Real average weekly earnings fell by 0.7 per cent in the 12 months to January 2022. This was actually an improvement on the previous month’s figure of a 1.0 per cent fall. But is it unfortunately just a period of relative calm before the storm – real wages could fall by over 4 per cent in the coming year, and might not start rising again in annual space until Summer 2024. The coming 6.6 per cent rise in the minimum wage will be wiped out by inflation. 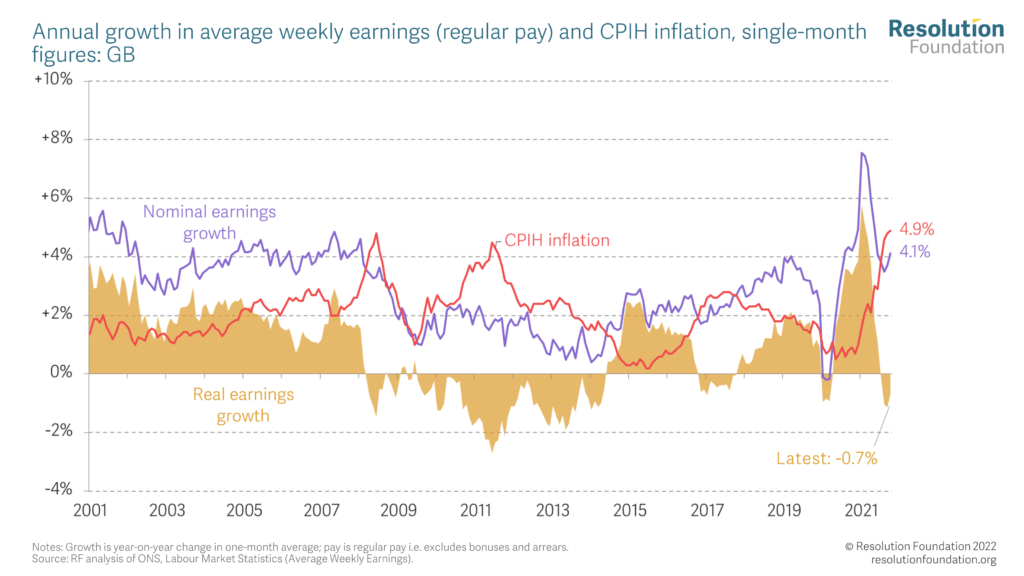 The future path of nominal wage inflation is key

A key question for both living standards and the outlook for inflation and interest rates is what happens now to nominal wage inflation.

The big rise in import prices is a hit to living standards, and means that higher nominal wage inflation would be necessary, other things equal, to protect workers’ living standards. But other things would not be equal – these higher wages would boost firms’ costs, putting further upward pressure on inflation, and so on. This could lead to the kind of sustained, domestically-generated inflation that the Bank of England could have to respond to with higher interest rates, ultimately leading to higher unemployment.

We cannot learn very much from previous episodes of rising imported inflation in the UK. During 2008, workers did not secure higher wages, but the labour market was weakening. During the  oil shock of the mid-1970s, wage inflation did increase, but workers were much more unionised than today, and the Bank of England was not an independent inflation-targeter.

So the present combination of inflation targeting, decentralised wage-setting, a tight and tightening labour market and a huge commodity-price shock puts the UK in uncharted territory.

Our forthcoming Labour Market Outlook will address this issue, looking in more detail at what is happening to pay today, and learning lessons from other countries. The answer will tell us whether we will ultimately end up adding higher unemployment to our current unpleasant combination of weak participation and weak real wages.