TOTCs this week comes from a misty South-West, which is a mixed blessing (low virus cases, high wind/rain). But even with low cases, the impact of the pandemic is everywhere – particularly in the face-to-face services in tourist reliant areas who, along with city centres, are in the front line of this crisis.

The young woman, ahead in the queue for fish and chips in Plymouth, will stay with me. She was desperate to work, had just applied for a job in Costa. And got nowhere near an interview. That’s the reality that lies behind the stats. The young are more likely to be furloughed, more likely to lose their jobs if furloughed and less likely to find another job (this last point is crucial, as COTW explains).

To give your eyes a rest, this week’s reads include some listens, on the welfare state and high-quality childcare. Plus a deep dive into diversity in UK economics that is well worth your time.

Have a great weekend everyone.

Economic diversity. We’ve touched many times before on the diversity problem in economics, but too often those debates are based on US data – leading to insufficient introspection on this side of the pond. So well done to the Royal Economic Society for funding work by our friends at the IFS into the situation here. The headline news is that both staff and students teaching/studying economics are ethnically diverse (24 per cent of academic economists and 37 per cent of economics undergrads) – more so than the population or academia as a whole. Gender is a much bigger challenge at this aggregate level (1 in 29 men study economics vs 1 in 105 women). But while this might imply a lot of ethnic diversity in the economics pipeline it’s far from job done. Firstly, as ever, there are big differences between ethnic groups: Black academics are far too rare. Second, white economics students and staff are much more concentrated in Russel Group universities. And third even if the pipeline has seen progress, the transition to the world of work (including into places like the Resolution Foundation) has a long way to go: the Government Economic Service saw 8% of ethnic minority candidates offered a Fast Stream job vs 22 per cent of white candidates. Lots of food for thought.

Talking creativity. The Bank of England’s chief economist, Andy Haldane, has generally been on the optimistic end of things in this crisis (complaining that pessimistic “Chicken Licken” views could damage the economy). But he’s delivered a notably (and rightly in my view) pessimistic take on home working this week. He rightly notes that it can mean fewer distractions and the opportunity to do “deep work” (so long as the schools are open), but that the loss of informal conversations and difficulty building social relationships over Zoom are huge problems, particularly for creativity. We don’t want everyone becoming home based typing robots – otherwise the actual robots really will take a load of our jobs…

Driving quality. I promised some podcasts, so check out this terrific one with Tom Dee, winner of the Vernon Memorial Award for the best paper of the year. He discusses his work on childhood education (for the anti-listeners out there, read the paper). The big argument is that transparency about quality really does drive up standards. A public report card – measuring things like teacher qualifications – for childcare centres raises standards for children in two ways: parents put fewer children into badly rated centres and those same lower quality centres improve more quickly. Because ranking services is hard, and inevitably unfair in some instances, it’s often controversial. But this shows that in some cases the economics of voting with your feet can work.

German welfare. The latest edition of Radio 4’s Analysis is well worth a listen, with Ben Chu asking whether our welfare state should be more like Germany. Champions of the British approach say it’s targeted at need and less costly. In contrast the German system cares as much about what you were previously earning: for example, a professor who becomes unemployed could receive 80 per cent of her current wage for a year. The fact that we don’t have that kind of scheme is exactly why the furlough scheme had to be invented at such short notice. The big thing we’ve got to decide: is this a temporary or permanent shift in the British model?

Politics costs. You would be forgiven for thinking that the price of a loan would be based on things like the Bank of England’s interest rate and your credit worthiness. But a new paper (The Economist’s take) finds that politics matters too, driving the perkiness/pessimism of bankers. Bankers who voted for the losing party charged on average 7 per cent higher loan spreads to firms, which the authors put down to bankers becoming more pessimistic about the economy’s prospects when they see a president who they opposed in power. The lesson? With a US election looming US firms should choose a banker whose happy with the result. The unrelated lesson is that everyone should vote for Joe Biden.

We’re now 8 months into this jobs crisis. And we’ve got months, if not years, of it to go. So it’s really important policymakers are clear sighted about what’s happening. This isn’t always easy, with labour market data rarely moving at the pace of the crisis itself. To help we’ve got a major new report based on a big survey of workers. There is a lot of detail in there. On the job losses front, the bad news is that the wind down of the retention scheme had seen 1-in-10 previously furloughed workers not working in September. That rises to 1-in-5 amongst young and BAME workers. But as COTW shows, focusing only on job losses risks missing what is really going on with this crisis. More of the current rise in unemployment is in fact is driven by huge falls in the chances of those that are unemployed finding new work. Firms simply aren’t hiring given the toxic combination of huge uncertainty and weak demand. This is why it was so dangerous for some to be arguing for a big labour market shake out from pandemic hit hospitality and leisure jobs, claiming that we would then see people swiftly moving into growing parts of our economy. It’s best to base your economics advice on facts, not fiction. 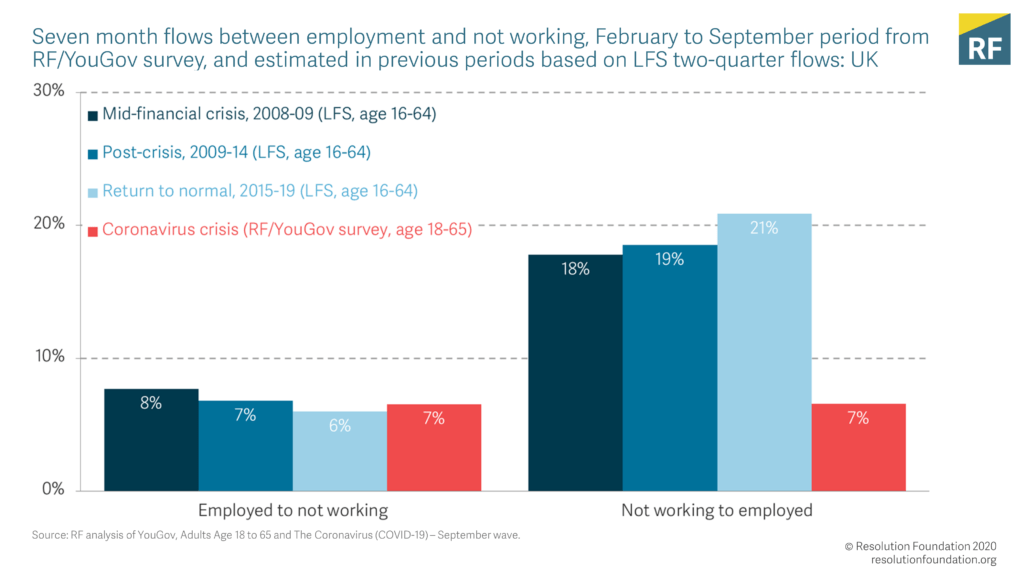