It may go unnoticed amid the current political turmoil, but today we learnt a lot about the recent state of Britain via the publication of official statistics on incomes, poverty and inequality. We already know how the economy and labour market have performed over recent years, but today’s stats give us much more information about how this all fed through into households’ living standards in 2017-18. And the results are concerning.

2017-18 was a year in which average prices rose by around 3 per cent – faster than most earnings, benefits or other income. As a result, typical household incomes fell by around 0.2 per cent in real terms. This fall is similar to separate ONS stats released last month, and our own income projections. As the chart below shows, this brings to a clear end the growth streak of 2013 to 2016, which was greatly helped by very low inflation. 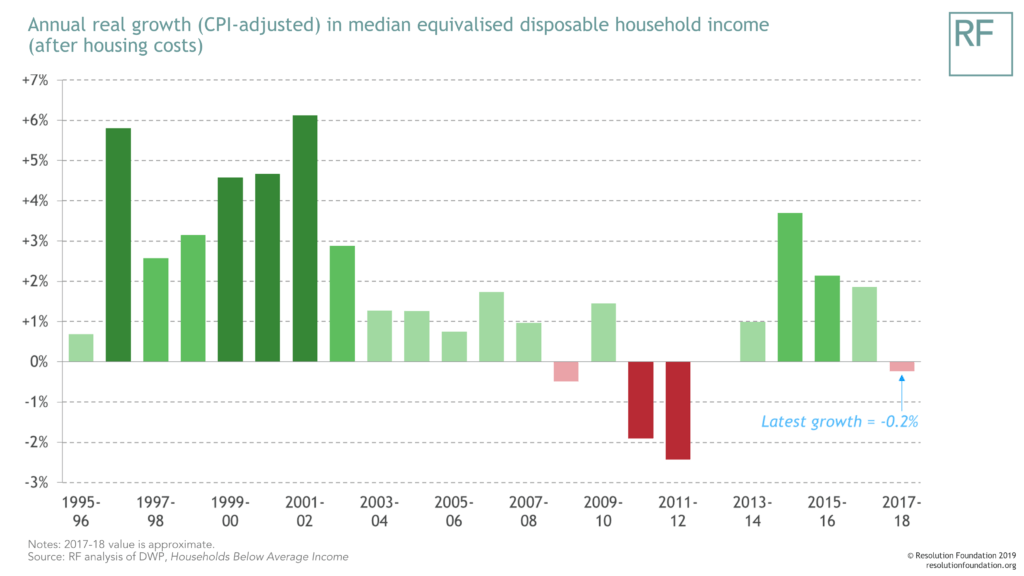 There were larger income falls for the poorest

For some, the hit to real incomes was likely even greater. The chart below shows how real incomes fell for lower income households, despite the progressive effect of rising employment. While there is great statistical uncertainty around such year-on-year growth figures, this pattern is in line with our projection that the benefit freeze and high inflation, as together with other cuts, are leaving many households worse off. 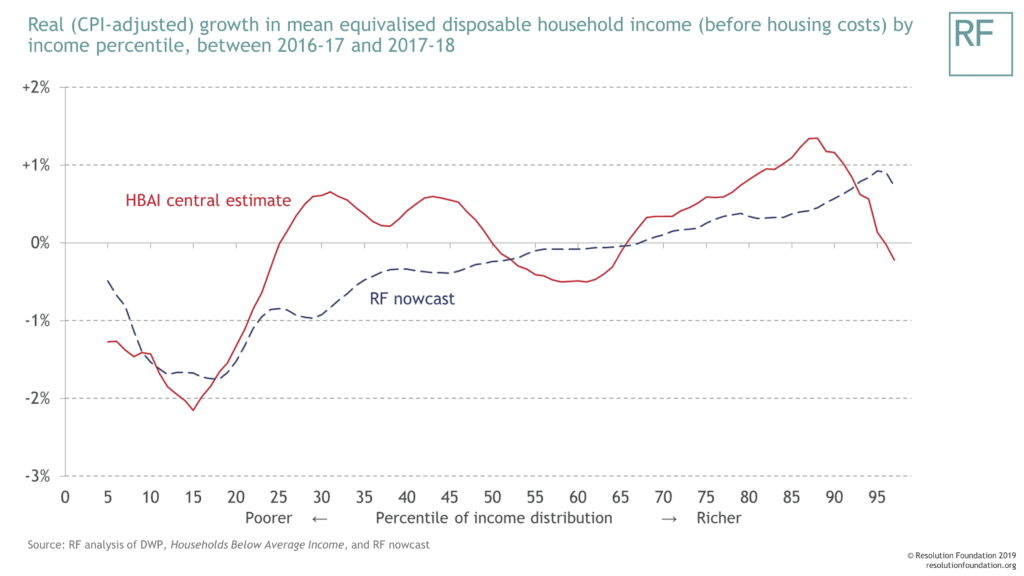 Inequality rose slightly, and remains higher than in most of the last half-century

Given that pattern of growth, today’s figures show a rise in overall inequality in 2017-18. Focusing on the longer-term trend – in which we can have more confidence – it remains the case that overall inequality has been relatively flat since the crisis, but is high by historical standards – particularly when incomes account for housing costs. 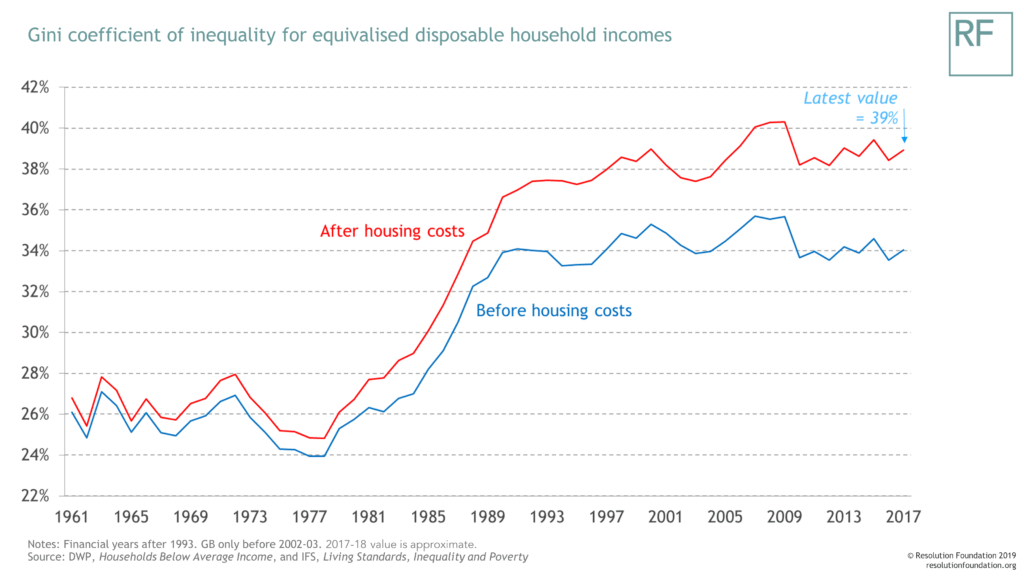 Today’s poverty results were not straightforward. The figures include a range of poverty measures: we can look at different groups; incomes can be assessed before or after housing costs; poverty can be relative (below 60 per cent of the new median) or absolute (below 60 per cent of the 2010-11 median, in real terms); and we may also look at material deprivation or persistent poverty. On top of this, single-year changes may be the result of chance.

Today’s figures imply that absolute child poverty worsened in 2017-18, with a rise of around 200,000 children (after housing costs). Britain rarely experiences rises in absolute poverty so this latest increase is particularly worrying, especially as the proportion of low income children experiencing material deprivation also rose slightly. 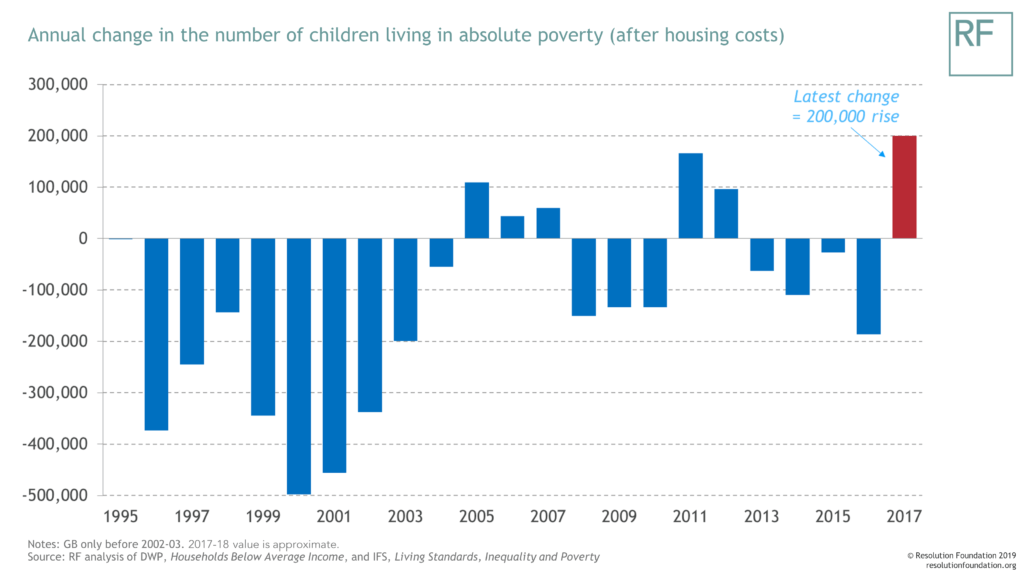 Relative child poverty did improve slightly after accounting for housing costs, though all of these findings come with a large degree of uncertainty. And we shouldn’t take too much encouragement from this change. After all, of all the ways reduce relative child poverty, tanking median household incomes is the worst way to do it. All in all, the proportion of children in relative poverty (after housing costs) therefore remained stable at 30 per cent (or 4.1 million children). 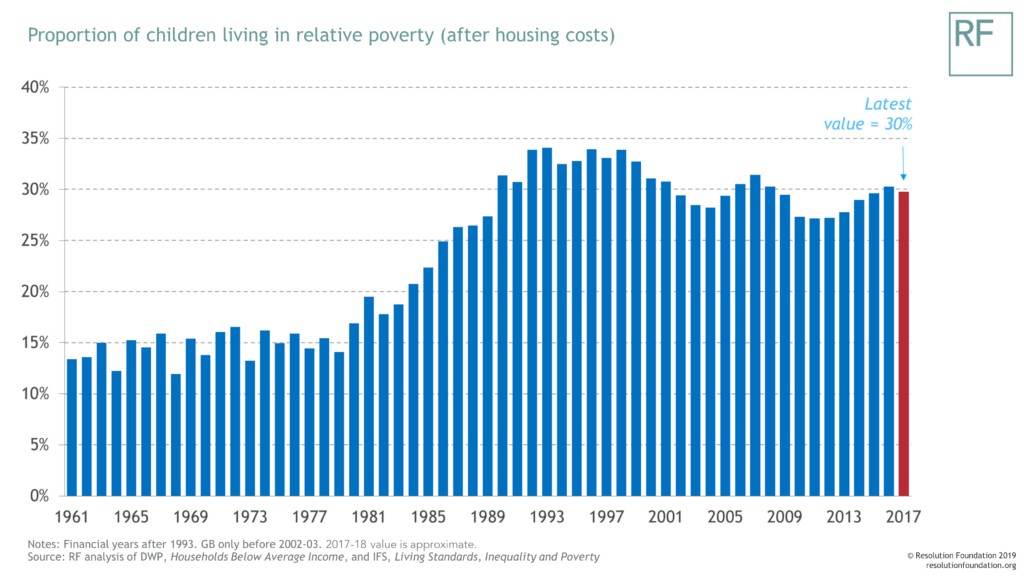 Today’s figures also show that child poverty in Scotland, where there are ambitious targets for 2023-24, is heading in the wrong direction – as we explored last week.

It isn’t just the number of children living poverty that is changing – the nature of that poverty has evolved too. The Secretary of State was right to acknowledge in her response to the figures that 665,000 fewer children are growing up in workless households. What she should have added though is that 70 per cent of poor children now live in working families (and note that the majority of the remainder have lone parents). Policy must therefore also shift back to focusing on supporting working parents.

Today’s stats refer to 2017-18. But – as we enter 2019-20 – there is little reason to think the current picture is much better. The big benefit cuts that weighed on income growth in 2017-18 – including the benefit freeze, two child limit and abolition of the family element – have continued. So our latest living standards outlook projected a continuation of weak income growth (shown below), and good odds of relative child poverty hitting record highs by 2023-24 unless there are significant changes in policy. 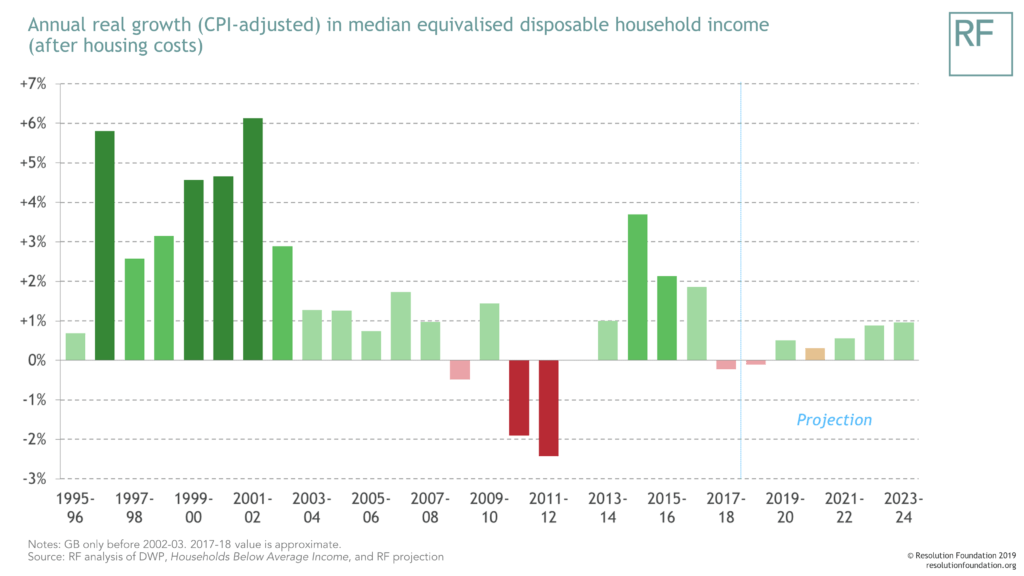 MPs and other politicians can’t do anything about living standards in 2017 or 2018, nor at this point even change the tax and benefit system for 2019. But if they can ever finish debating Brexit, they should consider what course they’d like poverty to take in the 2020s and how exactly they intend to achieve that.