Welcome to this heatwave edition of TOTCs. It nearly didn’t happen at all – I stop functioning once the mercury hits 25°C. Forget COVID-19, the sunburn-and-sweat risk should have been enough to put people off sardine-ing it up on Bournemouth beach yesterday.

But I’m liberal enough to see that for each sun-phobic vampire there’s a mad dog/Englishman out there – so enjoy this week’s reads, whether you’re beach- or basement-based.

I’ve also got two bits of Resolution news. First, we’re hiring – if you’ve ever enjoyed one of our events, maybe now’s the time to come and run them. Second, after some extensive trialling, we’ve very excited to launch Resolution Ventures to complement our established research work with direct support for innovative new enterprises that can help raise living standards. Lots more to come on this front.

Hostile environment. It turns out that this pandemic is shifting attitudes in good ways (increased public respect for those doing low-paid work – something that now needs to be channelled into some actual change), and bad ways. In the latter camp is news from new research that the pandemic has made us more hostile to other nations and their residents. The authors conducted an experiment in the Czech Republic and found that discrimination against foreigners was a 41 per cent higher among those encouraged to think about the pandemic. Hostility was particularly prevalent towards those from Asian countries. This is the backdrop to debates about whether we’re heading into a new era of protectionism and de-globalisation – the subject of an upcoming RF webinar. This Economic Observatory piece is also worth a read.

Slasher Sunak. Rishi Sunak is reportedly considering slashing VAT to kickstart the recovery. Is this a good idea? To decide we should consider both the lessons of history, and the nature of the specific crisis we face today. On history, read this study into the effectiveness of the 2008 VAT cut. The good news: it did the job, boosting retail sales by 1 per cent. On the nature of the current crisis, the news is less good. First, the main barrier to people spending right now isn’t price. Second, this crisis is exceptionally concentrated on specific sectors (hospitality/retail), and even sub-sets of those sectors (physical retail is down, while online retail is up). Our policy response needs to reflect these crucial facts, rather than simply reaching for levers we might use in a run-of-the-mill recession. Chris Giles takes that logic and argues for much bigger but sector specific VAT cuts for hospitality and tourism (£). That wouldn’t be our first choice (report coming shortly) but it would be on the shortlist. An overall VAT cut right now should not.

Climate action. While we’re on the subject of what policy should do to boost the recovery, read the Committee on Climate Change’s annual report to Parliament. While lots of it isn’t new (retrofitting homes, tree planting, infrastructure for cycling/walking) it’s still an impressive effort – bringing together policy recommendations department by department to persuasively make the case that “the most effective and decisive action to secure our recovery from COVID-19 will also accelerate the transition to Net Zero”.

Go West East. We spend a lot of time in TOTCs pouring over research into our own regional economic divides and the failure of policy to close them. An interesting set of three articles reminds us that this dilemma is also present in China. Back in May the Chinese government announced a new Go West strategy. The goal? Growing the economies of twelve western provinces and regions (which cover three quarters of China by land mass and a quarter by population) that have been left behind by the success of eastern coastal provinces. The second article is particularly worth a read, bringing with it the news that the Chinese tried a similar policy programme 20 years back. Did it work?  Not so much. The only good news is that at least it’s not just us failing to deal with our regional divides.

Adding value. The current jobs crisis is truly awful news for the 800,000 young people entering the world of work this year – unemployment early in your career has lasting impacts on your employment prospects. Part of the policy response to this trauma is keeping more people in education or training to ride out the storm. But how much does it matter which college you attend or course you take? There’s lots of high-profile research on the graduate premium, but (predictably) far less work done on these questions for Further Education. A welcome new paper fills this important gap. The headlines: 1) Which college you attend only has a moderate impact directly on your future earnings/employment 2) Which course you choose matters more – especially for women, where business/law/public services/care courses deliver (though gender pay gaps persist before and after study) 3) Training makes more difference for younger learners than adults, who on average spend fewer hours in formal study. Oh, and classroom-based training does a better job than distance learning. Lucky we’re not being forced into doing lots of the latter then…

Earlier this week we published our first wealth audit for Great Britain in partnership with the Standard Life Foundation, digging into levels and distribution of assets (and debt) across households. It covers the impact of COVID-19 on family balance sheets (higher income families are saving a lot more, lower income ones taking on more debt), but our chart this week is about a change that’s been building not for months but decades: wealth gaps. These absolute pounds and pence gaps between those with little and those with lots of wealth have grown and are much bigger here than in almost any other advanced economy. This helps explain why concerns about wealth inequality have risen when on most measures UK wealth inequality is lower today than for most of the 20th Century. Household wealth has surged since the 1980s, driving up absolute wealth gaps as those with wealth received more of it. Today the wealth gap between the top 10 per cent and the bottom 60 per cent in Britain is equivalent to 124 times typical disposable incomes. Why think about those gaps relative to incomes? Because they make painfully clear that you can’t really earn your way to being wealthy in 21st Century Britain – you need to be born into it, marry it or win the lottery. That’s not the Britain that conservatives caring about meritocracy, or lefties caring about equality, should want to see. 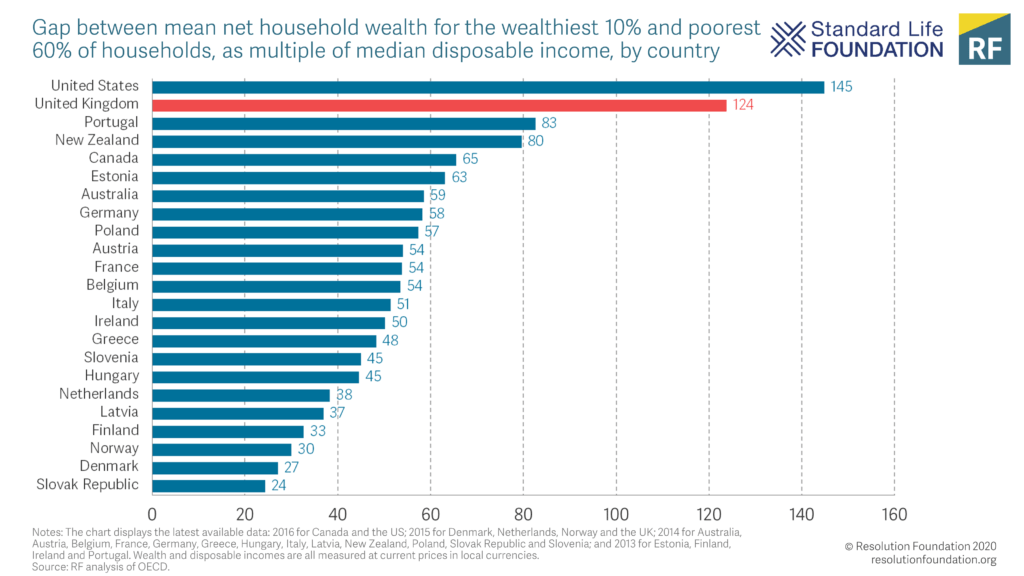