When economists and policy makers talk about living standards they think in terms of real (equivalised) household disposable incomes (before or after housing costs). This is a good approach to take, but it’s not how most people think.  A more common way is to think about how much money you have to spend on goods and services – after you’ve paid taxes and for housing – and what you actually spend it on.

That’s why government surveys collect a detailed picture of household expenditures across the population. It’s how we know, for example, that each person in the UK spent on average around £2 a week buying plants and flowers last year – 15 per cent more than at the turn of the century.

Stepping back from the (hopefully not) weeds, new analysis from the Resolution Foundation’s Intergenerational audit for the UK brings all this data together to show how spending power, and spending habits, have changed for different age groups over the 21st century.

The good news is that the typical pensioner spent around £390 per week on items other than housing last year, a real-terms increase of £105 a week since 2002. But on the flipside, the typical person aged under 30 spent £380 per week on non-housing items – that’s £28 a week less than at the turn of the century. For young adults to actually be spending less than they were nearly two decades ago is a truly worrying outcome. 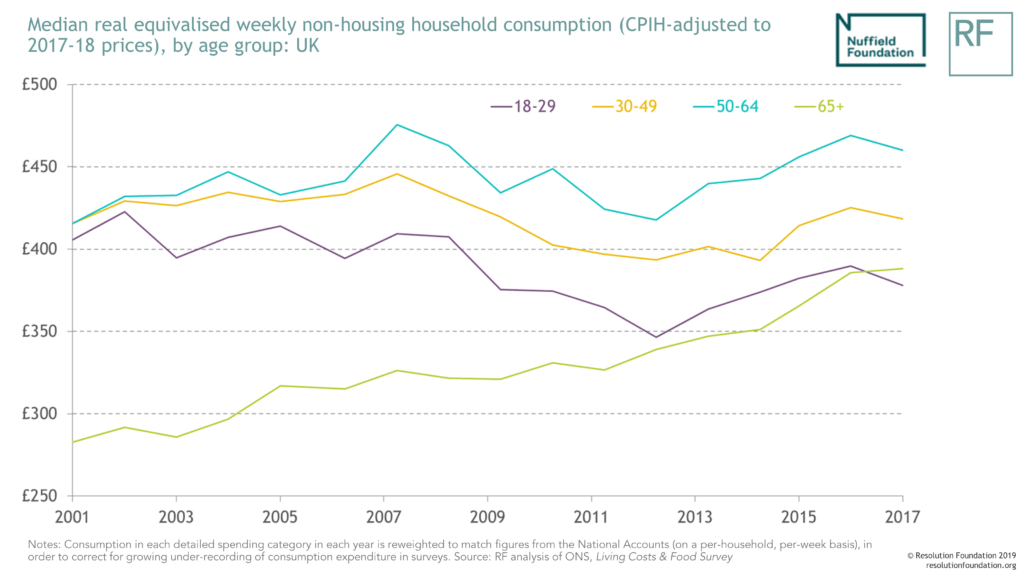 Beyond people’s overall spending power, we can also shine further light on how living standards are changing. Within their lower spending envelope, under 30s are still putting £8 more per week towards essentials like food and fuel than in 2002. But their spending on fun stuff like recreation (which includes streamed music and pets), cultural activities (like leisure classes and going to the cinema), restaurants, takeaways and hotels has fallen by £20 since the turn of the century. Millennials’ consumption crunch has moved their spending away from experiences, and towards necessities. This is a far cry from how young people today are normally portrayed.

Instead, the new culture vultures are those aged 65 and over, who are now spending an extra £42 a week on these fun goods and activities. As an organisation that strives to raise living standards, it’s great to see what higher incomes means for people in terms of spending more on the fun things in life. 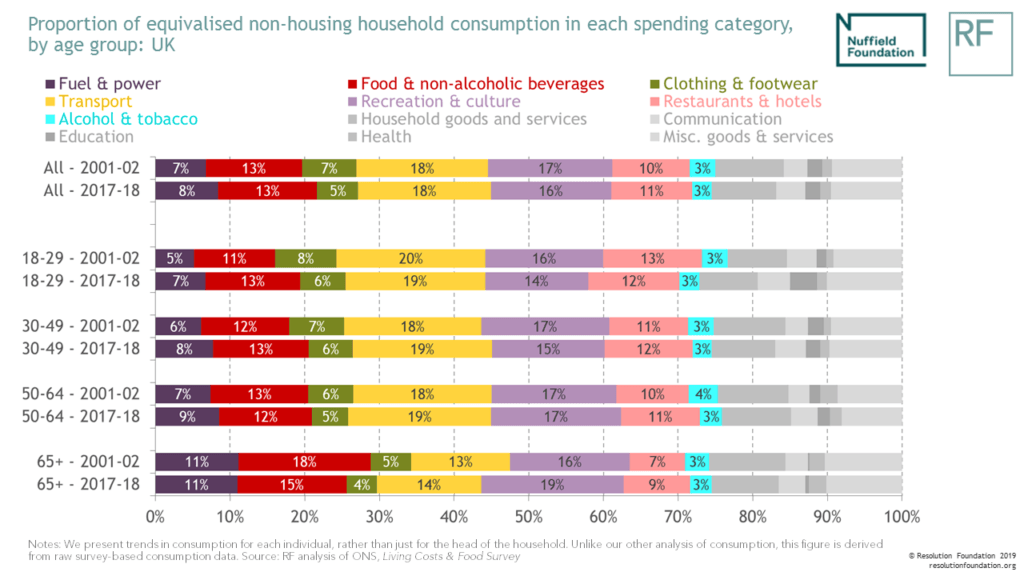 Our analysis also highlights wider societal trends. Young people today are spending less in cash terms on alcohol and tobacco, down £4 to £10 a week, while pensioner spending is up £2 to £11 a week. The other spending shift that has taken place since the turn of the century has been on transport – down £10 a week for young people, but up for older age groups.

What explains this ‘consumption crunch’ for the young, and flurry of fun activities for the old? Partly, they reflect the fact that young adults’ incomes have performed more poorly than pensioner incomes over the last two decades. This is due to the youth-focused pay squeeze following the financial crisis, and billions of pounds of welfare cuts for working-age families.

This consumption divergence also reflects the fact that younger families are spending a higher share of their income on housing. This is because housing costs rose rapidly before the crisis, and because the collapse of both home ownership and social housing for the young have increasingly left them in the highest-cost private-rented sector.

Finally, rapid wealth increases mean that older households can increasingly draw on their assets to support their day-to-day spending, especially since new freedoms introduced in 2015 have opened up access to pension pots.

So should we worry about this consumption crunch for young people? Yes, if you believe that each generation should enjoy higher living standards than the one before. That’s the minimum a growing economy should deliver, and what all generations – young and old – expect.

So alongside Brexit, turning this picture around has to be a top priority for whoever the next resident of No.10 is – especially if they plan on winning back younger voters in the next election.

This article originally appeared in inews