We’re back. I know this will be a big relief to you all – it’s equally good news for my bank balance. Turns out it’s not a good idea to combine the family preference for too many croissants with our national preference for devaluing the pound. Obviously the real lesson here is to never let kids loose in the boulangerie – it’s fine to debase the currency.

I want to thank you to all of you for sorting the whole national political crisis while I’ve been away. Some serious work has clearly gone in. A plan to unify the country with a cabinet made up of one gender. And one ethnicity. Genius. Wanting to negotiating a new deal with the EU, but no actual negotiations taking place. Can’t fail. Outrage at the idea that the Leader of the Opposition would quite like to be Prime Minister. Shock. It’s good to see we’re all bringing our A-Game.

But don’t worry – there’s at least another fortnight until the constitutional crisis kicks off properly.

Until then have a great weekend,

Generation trainspotting. You may well have heard the incredibly depressing headlines about record levels of drug related deaths yesterday – but it really is worth reading the full ONS release it’s based on. The increases are quite staggering: a 16 per cent rise in 2018 is a record increase to a record level of deaths. Men and the middle aged are leading the recent surge, which links to a wider social trend highlighted by less well publicised ONS research earlier this week. Generation X (people now in their 40s and 50s) are dying from drug poisoning or suicide in greater numbers than any other generation. And they’ve been doing so consistently since they were in their 20s. In 2017, 49 was the age at which most people died by suicide, whereas back in 1993 this age was 22. Depressing but important stuff.

Unpredictable childcare. Since the 1990s public policy and politics has discovered childcare. There’s a reason why it’s one of the few areas of the state that has expanded amid the austerity of the last decade. But there’s always been a fairly big policy challenge to prioritising formal childcare provision – children in lower income families have been much less likely to use it. Why? A new study (summary) provides further support for an explanation that goes beyond the normal focus on costs and lack of availability. Low-income parents, particularly mothers, are more likely to have unusual working patterns than their higher-income peers, and that makes it hard for them to access formal childcare. Their answer? Either give more parents predictable hours, or sort childcare provision so that it’s more flexible and exists outside the traditional 9-5 workday.

Loaded CEOs. Chief exec pay is out of control is the message of new US research this week. Run one of America’s top 350 firms and you get around $15m a year. That’s well over 200 times what the typical worker receives (it was 20 and 58 times in 1965 and 1989 respectively). The lesson? Reducing inequality would be a good idea, but also… make sure you become a chief exec – there are fewer and fewer other ways to get really wealthy in 21st Century America.

Dangerous Russians. Understanding how ideas are created is tough. However, we’ve generally believed that there are positive spillovers from working alongside or learning from other talented people working in the same field – their work sparks interesting new questions to ask, or indeed vital new answers. We certainly find this inside RF – which is after all why we encourage the reading of others research of the kind that fills up TOTCs. But a study I’d previously missed gives pause for thought… It takes the interesting case of Russian mathematicians who suddenly emerged from relative isolation into the global market for research after the collapse of the Soviet Union, with over 1,000 moving to the US. The result? American researchers working in similar fields saw their productivity fall, with fewer breakthrough papers and an increased chance of exiting research all together. So, while some people may stand on the shoulders of giants, others get squashed by them.

Lifestyle advice. We’re obviously a serious research institution. So it’s a rather unusual foray for us into Grazia style lifestyle advice today, with an article for the BBC on how to get a pay rise. The short version for those of you after some more cash but short on time. 1) Be young – 20 somethings get the biggest rises 2) Change jobs – you’ve got to keep employers on their toes! 3) You might need to move place too. Soz. 4) Be a man. Obviously. The gender pay gap is closing but far from closed. 5) Stay out of the squeezed middle – over the past two decades the lowest paid got decent pay rises because the minimum wage gave employers no choice, while the top have done perfectly well looking after themselves. 6) Get productive – the UK’s productivity slump isn’t good news for our pay packets…

Last week the ONS ruined everyone’s weekend with news the UK economy shrunk in the second quarter of 2019. But this week they’ve perked us all up with welcome news on pay. Average wages are rising at 3.9 per cent, within touching distance of the 4-4.5 per cent growth we were used to pre-crisis. Given that ‘perk up and carry on’ seems to Boris Johnson’s whole economic plan, it’s good that our paymasters are on board when it comes dishing out our pay slips. But it’s not all plain sailing. At exactly the same time as this good news on pay was revealed, official stats emerged showing a 0.6 per cent productivity fall in the second quarter of 2019 – the fourth consecutive quarter of falls. This is no surprise, but the juxtaposition is important given that productivity is, in the long run, the only sustainable driver of pay growth. Either productivity picks up, or wage growth will stall. This dilemma reflects well the broader economic position we’re in too – just as a tight labour market begins to deliver fruit after the long recovery from the financial crisis, the combination of Brexit uncertainty and a global slowdown risks making this stronger pay growth unsustainable. 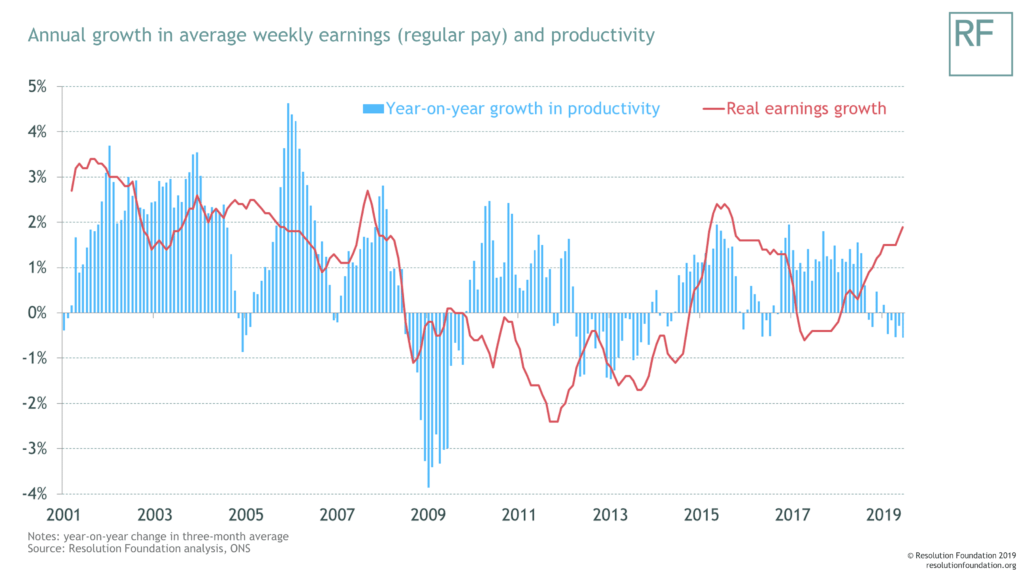