I’m worried we Brits don’t know how to row properly anymore. Obviously we still love a debate – the volume is probably up if anything – but we seem to love rowing about the wrong things or at cross purposes. First, we had the PM-induced “are wage rises on the back of lower migration a good thing” row, which totally ignored the reality that the growth rates of prices rather not wages is where the action is. And now, in response to those fast-rising prices, we’ve got a massive barney going on about whether the Bank of England is about to hike interest rates – which is a nuts focus given that there’s nothing the Bank can do about global gas prices and all of the real macro policy action is happening in the Treasury (see COTW).

All of this also misses the real national disgrace: the Budget is next week in the middle of half-term. This is a childcare-trauma-inducing torpedo aimed directly at the middle aged, economic policy bureaucrat class. As a result you can expect full passive aggressive Resolution analysis overnight next Wednesday. And I can expect really narky kids. Which is nice.

Obviously you come to TOTCs for the lifestyle advice, so here’s our prescription: don’t row this weekend, read instead. Have a good one.

Local locking. Rubbish policy can make for good economics. A new Bank of England working paper uses the farce of last year’s local lockdowns to unpick how important lockdowns vs voluntary behaviour were in reducing economic activity. Examining small firms just inside and outside the lockdown boundaries, they find firm revenue fell by 8 per cent more for lockdown-affected firms than those unaffected. That means less than half of the overall reduction in revenue during this time period (circa 20 per cent) can be attributed to the lockdown measures rather than voluntary behaviour change. Obviously of some relevance as we go into a winter with high case rates…

Highlighting HGVs. Lorry driver doom has dominated the news, so good on the ONS for swiftly turning round some much-needed data in a new blog. It shows why we’ve got a problem: HGV driver numbers are down from a peak of 321, 000 in June 2017 to 268,000 recently – with most of the fall mid-pandemic. There’s been a row about how much this fall is about EU vs UK drivers quitting. Both is the answer. British drivers were already exiting before the pandemic, with EU driver numbers holding up – but once the pandemic started the latter reduced by 30 per cent (vs a 10 per cent fall for the Brits). This is also an old workforce: almost 60 per cent are aged 45 to 65, vs just under 40 per cent for the population as a whole. The biggest falls are for 46-55 year old drivers, whose numbers have dropped consistently over the past four years – down almost 30 per cent. But the story for other age groups is more nuanced – the numbers of those aged 55-65 or under 36 were actually increasing pre-pandemic. Allegedly Fatima (the ballerina)’s next job could be in cyber, but for the rest of us HGV driving is the way to go.

Muted Marxism. This thoughtful blog from Branko Milanović rightly notes that while early economics thinkers like Marx and Ricardo have lots to teach us, they’ve not a lot to say about one of the hot topics of our era: high levels of income inequality between individuals. Why? Because they were almost entirely focused on inequalities between different classes fulfilling different roles in production – namely between workers and capitalists. That made some sense in the 19th century when the gaps between those groups were so much larger than the gaps between workers. The left in some countries still talks as if we live in that world, but the reality today is that a worker (think doctor/corporate lawyer) is often richer than a capitalist (think most of the self-employed). That’s not a world either Marx of Ricardo thought much about, and it’s a very different kind of inequality requiring very different answers.

Dense data. We like blogs and we like data tools. This week Tom Forth has given us both to help us understand what’s going on with 21st century city living. His argument = when the existing population of Leeds was asked in 2013 what they wanted by way of new housing, the answer was no building on greenfield land or in the suburbs, and that any housing to be built should go on brownfield sites in the centre of town. And that’s what’s happened. The blog shows that the density of Britain’s city centres has increased far more than the suburbs. Cities with trams have been able to become denser more easily than those without them, and those with metros have become denser over a larger area, rather than concentrating density growth within a mile of the city centre. The conclusion? Democracy works – at least for those already living in the suburbs who don’t want anyone else living in their richer parts of the city…

Podcasting patriarchy. If reading is all too much, listen to a recent podcast discussion between Alice Evans and Claudia Goldin (okay you can read the transcript if you insist). There’s lots of food for thought as they discuss the latter’s new book “”Career & Family: Women’s Century-Long Journey Toward Equity”, ranging over topics such as why men get more top jobs and whether women are really better off being in Sweden (with a lower gender pay gap) than the US.

As mentioned above, the hot topic this week is imminent interest rate rises – comments from the BoE’s new chief economist made that the front page of the FT again today. Markets are now expecting rates to be 25 basis points higher by the end of the year (0.35 per cent vs. 0.1 per cent now). But this obsession with rate rises is weird for two reasons. First, it’s painfully clear the UK has imported the row from the US (where it’s reached fever pitch) – but done so while completely ignoring the reality that we’ve had a bigger pandemic hit to our economy, and the US has significantly higher inflation. As a result the balance of risks between a weak recovery or high inflation is not the same here. Second, the focus on what central banks will do is really odd when all the important macroeconomic policy action is actually happening in the Treasury, not Threadneedle Street. As today’s chart shows, fiscal policy is tightening significantly and whether that pace of tightening is right is what we should be debating – any monetary policy tweaks will pale into insignificance in comparison. Of course the Bank is right to think that in the longer term people thinking it will act to keep inflation down is important in actually doing so, but the rest of us need to focus on what actually matters right now… and the Bank of England fiddling with interest rates ain’t it. 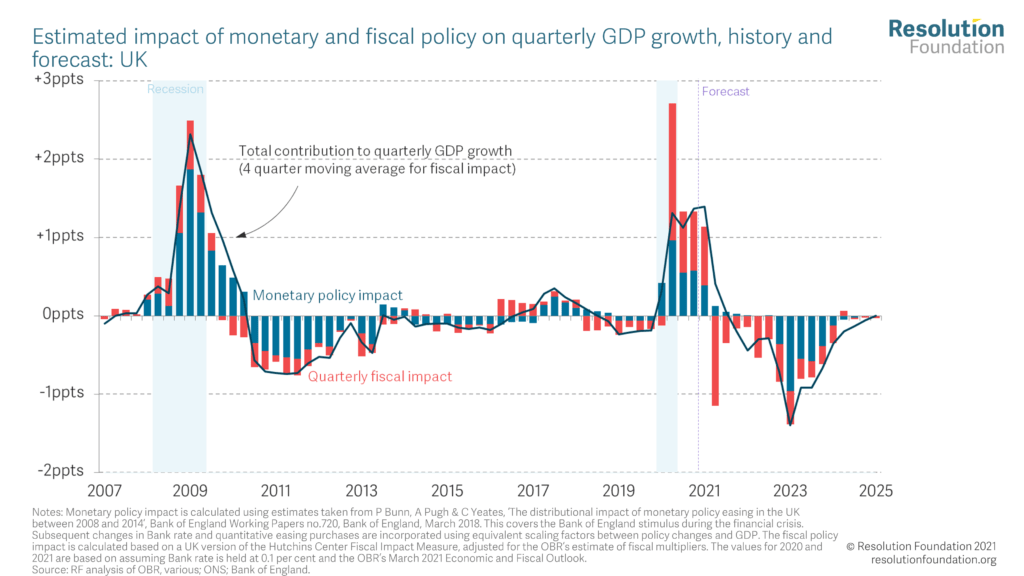