And happy “science is good” week to everyone. We’ve got vaccines being certified and protein structures getting determined – which all sounds very impressive.

But the onward march of technology brings challenges too. This week saw retail reopen its doors but Arcadia and Debenhams on course to close theirs forever. So this week’s reads include historical food for thought on that front, while Chart of the Week encourages us to draw the right lessons for the future.

Hope to see you in a (socially distanced) queue for a vaccine jab sometime soon. Have a great weekend.

These boots are made for automating. Tech’s not new (don’t tell the Silicon Valley types). To prove the point, a new blog digs into the impact of mechanising Victorian boot-making. Examining census data between 1851 and 1911, it identifies the tasks carried out by 1.16 million English boot-makers. The arrival of the sewing machine in the late 1850s did for 90 per cent of binders’ jobs (whose job work was to sew together boot uppers) but created new jobs to operate the machines. But the geography impact here is key: while binders had existed throughout England, sewing machinists were concentrated in the boot-making centres of Leicestershire and Northamptonshire. To bring this story up to date, check out figure 7 in this RF report showing UK jobs in leather goods manufacturing falling by three quarters since 1995. So, technology didn’t just change jobs, it moved them.

Fertile aristocrats. A fortnight back we touched on historic German inheritance rules driving economic change, so it’s only fair to give the British aristocracy some love. There’s a lot of chat about the impact of how many kids the rich have on wealth inequality (more kids = less inequality). But a new paper flips that question around, examining the impact of inheritance rules on whether aristocrats had kids at all. British aristocrats were famously childless in the 1600s (one-third of them were vs. one-tenth population-wide, and among French peers). The paper examines the impact between 1650 and 1882 of a revised ‘settlement’ process that required heirs receiving estates to pass them on to the next generation (ie they couldn’t just sell it and have a good time). The impact is huge: increasing the chances of child bearing by 85.9 per cent. This isn’t just ancient history – our current new era of very high wealth relative to income is seeing a renewed focus on approaches to inheritances that restrict what heirs can do with it (think trusts). So, for the billionaires among you, when designing those systems think about how many grandkids you want, not just how best to stop your children becoming idle wasters.

Debt overhangs. All the vaccine chat has got people turning their thoughts to the recovery. Sources of optimism come from the fact that everyone will want to spend on going out again post-jabs – and that (a subset of) households have saved a lot more in 2020. A more pessimistic consideration however comes from the extra debt many firms have taken on to get through this year. So concludes a new blog from economists at the Federal Reserve Bank of New York. The authors find that firms with large debts are less able to take up new opportunities (because they struggle to get more finance), showing that firms that went into the financial crisis with higher debts grew more slowly afterwards. Their pessimism about the future rests on two findings: 1) firms went into this crisis with more debt than last time round 2) surviving 2020 has required them to borrow more. Despite the UK Government guaranteeing huge amounts of lending to firms last year, policy makers do not currently have a view about how they aim to avoid higher corporate debt levels holding back our recovery. They should get one.

Be civil. This week saw the launch of the Commission on Civil Society – a great initiative given the crucial role civil society plays in our national wellbeing. We’ll hopefully all learn a lot from the Commission in the years ahead. For now you can learn from the report that accompanied the launch (apparently four-in-ten of us volunteered during the first lockdown) and a great collection of essays from 21 thinkers, activists and academics (including our own David Willetts).

Missing Midlands. The ability of UK public policy debates to forget the Midlands exists is something that never ceases to amaze me. So I am primed to agree with a new, and personal, blog from Jon Neale that laments the degree to which the Midlands can both get lumped into discussions of North vs. South, but also have its needs (and problems) ignored by those discussions. The disaster that is the labour market of Birmingham and some wider aspects of the West Midlands never ceases to amaze me, but I can’t remember a single national politician ever asking me about it.

The pandemic has been awful for most firms, but much worse for some than others: hospitality and high-street retail are in the frontline. The future of our pubs apparently hangs on the definition of a scotch-egg, while many shops – from Debenhams to Topshop – face permanent closure. But when pondering the lasting impact of these trends it’s crucial to understand which are purely cyclical (ie just down to the shock itself) and which are structural (with the crisis having sped up change that was coming pre-crisis). This week’s Chart therefore encourages us to think very differently about the long term futures of these two sectors both hit hard by Covid. Our judgement is that hospitality as a sector (although far from all firms) is likely to bounce back post-pandemic and continue its long-term growth – so the task is to help workers and firms bridge to that recovery. But for retail the pandemic has sharply accelerated a decline that began even before Philip Green got his gong. Retail’s share of employment has been declining since the mid-2000s, a decline accelerated by the shift to online shopping. And the speed of change matters – high streets need time to successfully adjust from retail venues to locations for offices, hospitality and leisure. If time is in short supply post-crisis, the danger is more ghost town centres in the years ahead. 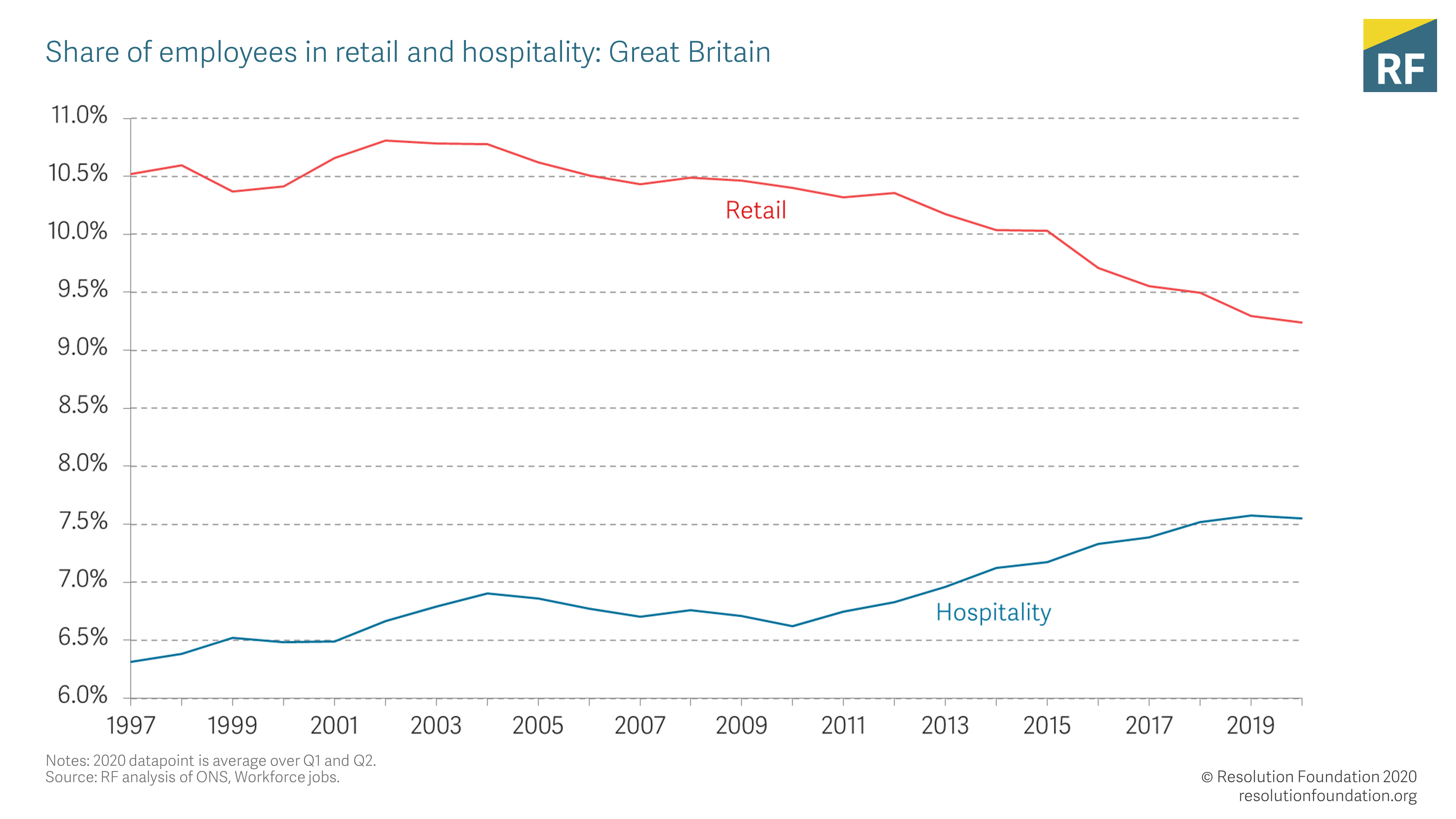