Good to see the Treasury set out their latest big policy response to fast rising inflation this morning. Not tackling the supply shocks or protecting the incomes of poorer households, but doubling the contactless payment limit to £100. Rising prices might make you poorer but at least they won’t mean a surge in pin entering. Now all you’ve got to do is find something you can actually buy mid-shortages.

Not everything is in short supply in modern Britain though. Like every other middle-aged professional bloke I’m off for a long run (the Yorkshire Marathon on Sunday). Concerned colleagues have questioned whether sitting at a desk in Resolution towers is the best training for a 40km+ jog.

But I’m confident a working life spent on British public policy is the perfect preparation for a long painful experience that ends up with you back where you started in significantly worse shape.

Anyway, say hello if any of you are going to be there. Everyone else can more constructively use the time saved to browse this week’s reads – which bring you news of dodgy doctors, Italian jobs and the pandemic’s silver lining (better relationships).

Clever claimants. This is a really interesting/fresh/traumatising read: a new paper examines the role of intelligence in shaping reactions to economic policies. Using data on Finnish men, the authors find that when a car scrappage scheme is brought in those at the top of the IQ distribution are twice as likely to take advantage of the scheme than others (of those with a scrapable car). It’s differences in awareness and understanding doing the work, because this gap is after controlling for income, education, wealth and other characteristics that we normally focus on to explain different responses to policies that rely on financial incentives. The authors focus on the macro-economic consequences of this (e.g. it hampers efforts to stabilise the economy in booms/busts) but there are wider policy implications: it means using financial incentives to drive behavioural change for net zero purposes is likely to redistribute £ from low to high IQ individuals…

Furlough Furlove. We’ve regularly talked about the economic benefits of swift Government action in the pandemic: creating the Job Retention Scheme and the Self-Employment Income Support Scheme hugely helped cushion household incomes from the full effects of lockdowns. But a new report shows that the schemes had another effect: improving people’s relationships. It shows that employees were 60 per cent more likely to report their relationship had got better if on furlough or taking paid leave than those working the same or more hours, controlling for a range of factors including parental status, relationship duration and vulnerability to Covid-19. This obviously wasn’t the main policy intention, but it’s surprising good to know that people spending more time together is actually good for relationships (so long as financial pressure doesn’t follow).

Nobel causes. The economics buffs among you will know the Nobel Prize for Economics was awarded this week to David Card, Joshua Angrist and Guido W. Imbens. The prize reflected their work which has “revolutionised empirical research” in economics by pioneering the use of natural experiments to answer questions about cause and effect (e.g. to draw conclusions about the impact of policies). The work of David Card in particular provides the backdrop to lots of the research that empirically focused economists like ourselves do – in his case most famously showing that the received wisdom of previous generations about minimum wages (that they caused employment declines) and immigration (that it causes big wage falls for native workers) was wrong. For a summary of their work read the Nobel team’s blog or Noah Smith’s take. Also check out Adam Tooze’s great long read on Card’s seminal paper on the labour market impact of Cuban migrants to Miami (and then watch our recent event on the importance of the very same migration/wages debate today).

Duplicitous doctors. Not following instructions for using medication correctly is seen as a bad thing – stopping us getting better or actually causing new problems. We generally assume laziness/poor quality information are the main causes, but it turns out something else can increase non-compliance: medical knowledge. New research from Sweden shows that doctors (or their close relatives) are in fact seven per cent less likely to adhere to medication guidelines. The reason for this? Doctors’ expertise gives them confidence to ignore guidelines based on weaker clinical evidence (fair enough) or those, such as how to use antibiotics, that protect the public good rather than specific patient’s interests (naughty doctors). I’ve always said we shouldn’t trust experts.

Relocating robberies. Do security measures actually deter crime or just displace it on to less well-prepared targets? Both is the answer from a paper using data on Italian bank robberies to investigate the effect of security guards. The good news: hiring a guard reduces the probability of a bank being robbed by a bit over a third. Less good news is that half of these deterred robberies spill over to a nearby unguarded bank. The economists answer to this negative externality on unguarded banks is to discourage the use of guards in some situations (rural areas) and require them in all banks in more densely populated ones. The more important question the paper left me with is what on earth is going on in Italy to make bank robberies so common:  seven per cent of Italian banks get robbed per year!

After a 50-year wait we’ve taken back control of our trade policy. In the excitement that follows we’re like school-children in a sweet shop, grabbing as many penny sweets rollover trade deals as we can but paying zero attention to the bigger question of obesity how trade policy fits with our new (work-in-progress) post-Brexit economic strategy. The old plan was clear (and is clear in this week’s chart from our new report Trading Places): have a big home market in the EU, bringing competition and foreign £ to drive up manufacturing productivity (and down manufacturing employment), while specialising in exporting services. Our new plan? Well, we know that all politicians LOVE a hard hat and want a manufacturing renaissance (they’re generally embarrassed about our success in services). That might ‘level up’ Britain, given that high-value services are highly concentrated in the south. But economies don’t change what they are good at fast, so the risk of doing down our service industries with no new economic strategy to drive productivity elsewhere is obvious: we level down. 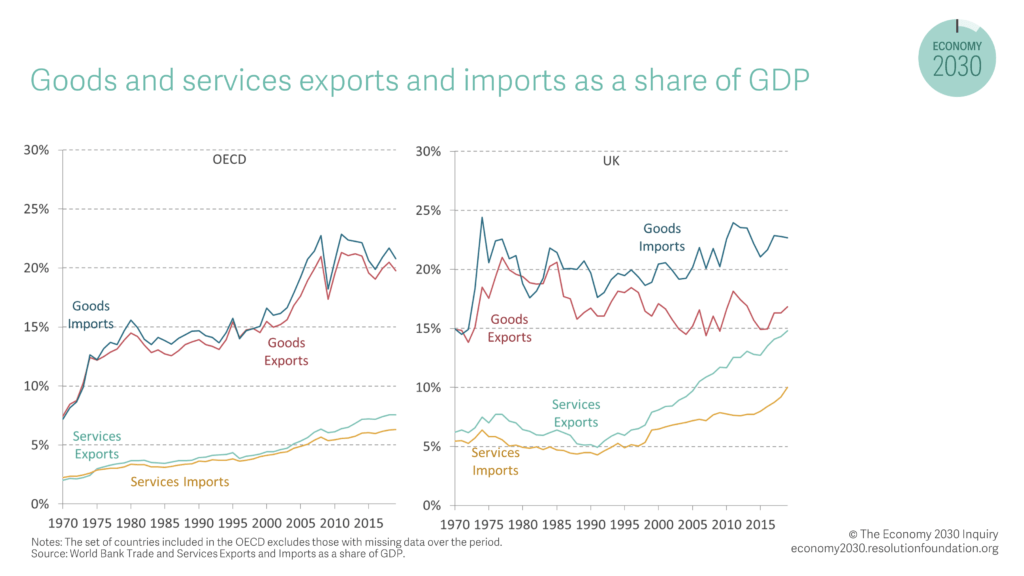