Boris Johnson used to want to be Churchill. Now it’s FDR. I see there’s been a lot of snide remarks about the fact that re-announcing £5bn infrastructure spend isn’t quite the same thing as Roosevelt’s doubling of federal government expenditure during the 1930s. Personally, I think we should all be grateful for what we’ve got – after all the third major allied leader was… Stalin, and Putin’s doing quite enough impersonating him this week.

Now forget who they think they are, what matters at present is what our political leaders actually do in this new, reopening, phase of the economic crisis. The answer so far is not enough, specifically not enough on jobs, and not enough to recognise the uniquely sector-specific nature of this crisis given the deep and lasting impacts on hospitality, leisure etc. Filling that gap is the Chancellor’s job next Wednesday. Earlier in the week we’ll be setting out a comprehensive plan for what he should do (join the launch event with Amber Rudd and Ed Miliband), and this week’s reads also provide some pointers.

Have a good “back to the pubs” weekend. Personally I’d leave off Jacob Rees-Mogg’s ‘yard of ale’ advice, but maybe that’s just because I’m generally just less keen on being horizontal than he is.

Shocking sectors: In shock news, this current crisis is ‘not-normal. While that might not be a ground-breaking revelation, it matters a lot for how we think about policies to support the recovery. New research this week focuses on one of the key differences between today and a more ‘normal’ recession – how much it varies by sector. While some sectors like transport are seeing massive falls in demand, as people decide not to travel, others, like food and accommodation are seeing big supply shocks in lockdown. What does this mean? Measures usually used to stimulate the economy as a whole could be a lot less effective when the problem you’re trying to solve varies a lot by sector, and could be around half as effective as in a normal recession. The solution – target support by sector.

Mind the gap: How similar are our views to those of the people that we vote for? That’s one of the big questions posed by interesting research from ‘The UK in a Changing Europe’ think tank. Some headlines: On the economy it turns out that Conservative MPs are more right-wing than their activists, and a lot further to the right than their average voters. In contrast Labour MPs are less radical than their members on the economy, but basically in line with their voters. Which in part tells you why Boris Johnson is currently running against George Osborne as much as Keir Starmer, and that small state conservatism is basically dead. It’s a whole different ballgame on social values: voters are a lot less liberal than the average MP of any party – albeit closer in general to the Conservative party. Which tells you why Keir Starmer doesn’t want to spend the next four years in a culture war.

Socialising economics: What lessons do sociologists have for economists pondering their own professions engagement with issues of racial discrimination? That is the interesting question posed and answered in a  timely paper by Harvard sociologists Mario Small and Devah Pager. It offers lots of food for thought, but one stood out for me: that many discussions of discrimination in economics start from the premise that it is rooted in rational behaviour by the person discriminating – either because they place value on not being exposed to certain kinds of people (taste discrimination) or because they use race as a proxy for other variables they cannot observe (statistical discrimination). This can mean placing lots of emphasis on rational individuals actively choosing to discriminate, and not enough on unconscious bias and unintentional discrimination. The crucial role of history in shaping outcomes today also comes through loud and clear (something these sociologists seem to have more of a handle on than historian David Starkey).

Innovate How innovation happens is always an important question, and obviously slightly shoots up the agenda when we need lots of it to get us out of the health side of this crisis. So a very readable blog from Jonathan Haskel and Stian Westlake is well worth your time. It proposes a useful distinction between quality and quantity theories of innovation, arguing that whether you favour the former over the latter should depend on whether you think that the nature of (and value in) innovation is really about the top few breakthroughs or more widely spread. With the government committed to a huge increase in R&D spending in the years ahead, more pondering over what the theory underpinning how that gets spent is a good use of people’s time.

‘Good’ politicians? What do we want from our politicians? According to a new paper published this week, it slightly depends who you ask. The study looks at three key attributes: ‘competence, integrity and authenticity’ (I appreciate that wanting all three might appear slightly ambitious looking at the world today). Everyone broadly values all three – but there are some differences: journalists place more value on competence, politicians take the integrity bit very seriously (which my experience is they do before you start sniggering at the back) while citizens are far more likely to prioritise ‘authenticity’ (although note the authors think of this as “being in touch” rather than as “saying what you think” – which is definitely a big part of what authenticity actually means to people). Worth a read for any of you planning on a run for office.

Covid-19 is ultimately a public health and economic crisis. But it’s also caused a profound social shock. We are all spending a lot more time at home – either in lockdown, home shouting schooling or working remotely – and will continue to while social distancing measures remain. This has shone a spotlight on living conditions, and as new Resolution research out today shows, major inequalities by age, income and ethnicity. COTW shows a huge two-in-five children in BAME households have no garden access, and one-in-four live in overcrowded homes. A similar pattern is present for low-income households. Age divides have also grown over time because, while housing quality has improved (far fewer people live in damp conditions), these improvements have been far larger for older generations. So, today young people have half the space of older people. Oh, and overcrowding has bucked the general improvement trend ie we’ve got more of it. So when it comes to levelling up, let’s not forget doing so on housing quality – which means sorting some minimum standards that actually get enforced in the private rented sector, and building some homes in the right places to get overcrowding down. 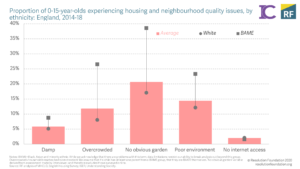