Chester has chuntered, giving the government of the day a kicking. Maybe by-elections returning to their rightful role in British politics will reassure the traditionalists who’ve spent the week panicking about the decline in religiosity (it’s less likely to help the racists worrying about quite how white London is).

Obviously Labour types should calm down about imminent 1997 style landslides – they won’t win Chester in a general election by nearly 40 percentage points. But then again they don’t need to in order to form a government.

Which might explain why we’ve got chunks of young, successful Tory MPs thinking it’s time for a change, announcing their very early retirement from politics. The plus side for Tory ministers? It gives those currently focused on our shrinking workforce/surging retirements somewhere to start: their colleagues.

This week’s reads cover the danger of the interweb, competing visions for which kind of flexible work people want, and a quiz that I did absolutely terribly on. Hope you do better/have a good weekend.

Infectious internet. Regular TOTCers will know we have a running theme of concern that the surge in mental ill health over the past decade isn’t unconnected to the surge in digital device use, despite the evidence not being nailed on yet. A further nail comes from research tracking the roll-out of high-speed internet (optic fibre) across Spain, which was quicker in some places than others. Where it arrived there was a material increase in teenagers’ (specifically girls) hospital visits driven by mental health issues. A big debate has been about the mechanism via which the internet does this damage. Here the researchers use a survey of teenagers’ time use to support the argument that it comes from the ‘crowding out’ of other activities – sleep and time with family and friends. Turns out teenagers don’t just get addicted to fags.

Fully flexible? Our friends at Timewise, the flexible work consultancy, have their Flexible Jobs Index out. The headline is that people want flexible work but only 3-in-10 jobs are advertised on that basis (they slightly underplay that given it’s up from 1-in-10 since 2015). My favourite bit shows what kind of flexibility is available for different types of workers – basically hybrid working for higher earners and part-time for lower earners (the concentration of part-time work among lower earners is the subject of a new Resolution report). The interesting question, not wrestled with here, is that the availability of the new form of flexibility (hybrid working) appears to have significantly reduced the demand for the old flexibility (part-time work). Post-pandemic we’re switching towards more full-time work, especially for women.

By-election binge. Any of you planning on running in a by-election anytime soon? If so I recommend some prior practice on the ONS’s Census Quiz – which lets you check your demographic knowledge of your area. It’s short. And hard (tip: if you live in an urban area remember the census was done mid-Covid in 2021…).

Tax takes. For a quick read on the (substantial) difference between raising taxes via freezing allowances (that we’re doing loads of) or increasing actual tax rates (that we’re doing none of), look to Donald Hirsh’s new blog. The take-away: if we’d raised income tax rates to bring in the same revenue the impact would have been bigger tax rises for higher earners and lower ones for those earning less than the median. Obviously the politics pushes in the other direction given threshold freezes are the ultimate stealth tax.

Brazilian babies. There’s a lot of focus on childcare costs in UK public policy – due to them being what we technically call absolutely massive. But for some wider perspective read new research on Brazil – where a shortage of childcare spaces for 0-3 year olds led the government to ration them by lottery back in 2007. Bad news for those missing out, but good news for both the lucky winners and researchers who were handed a natural experiment on the impact of such childcare. The impact was big. The winning households had higher incomes over the next few years (note this was about grandparents being able to continue to work, not just parents) and, as a result, taller/heavier children.

Anyone feeling cold these days should turn to the labour market data for some heat – with a red hot labour market scaring the Bank of England into raising rates aggressively. But it also has to balance today’s tight labour market with the reality it may not stay tight for long. Britain is entering yet another recession (we’ve really got to quit this habit…) which the OBR forecasts will see unemployment rise by around 500,000. Surveys of firms are pointing towards the labour market certainly not tightening further. As COTW shows, the proportion of firms reporting worker shortages has fallen back to levels when omicron was a thing last Spring (private sector vacancy numbers are falling too). As workers shortages have fallen, wage growth has also levelled off, albeit at a high level. Yes, expected wage growth for next year is still elevated, but before Bank of England types panic, note firms seem to basically assume whatever has been happening recently will continue. The big picture? The labour market is turning so enjoy the heat while it lasts. 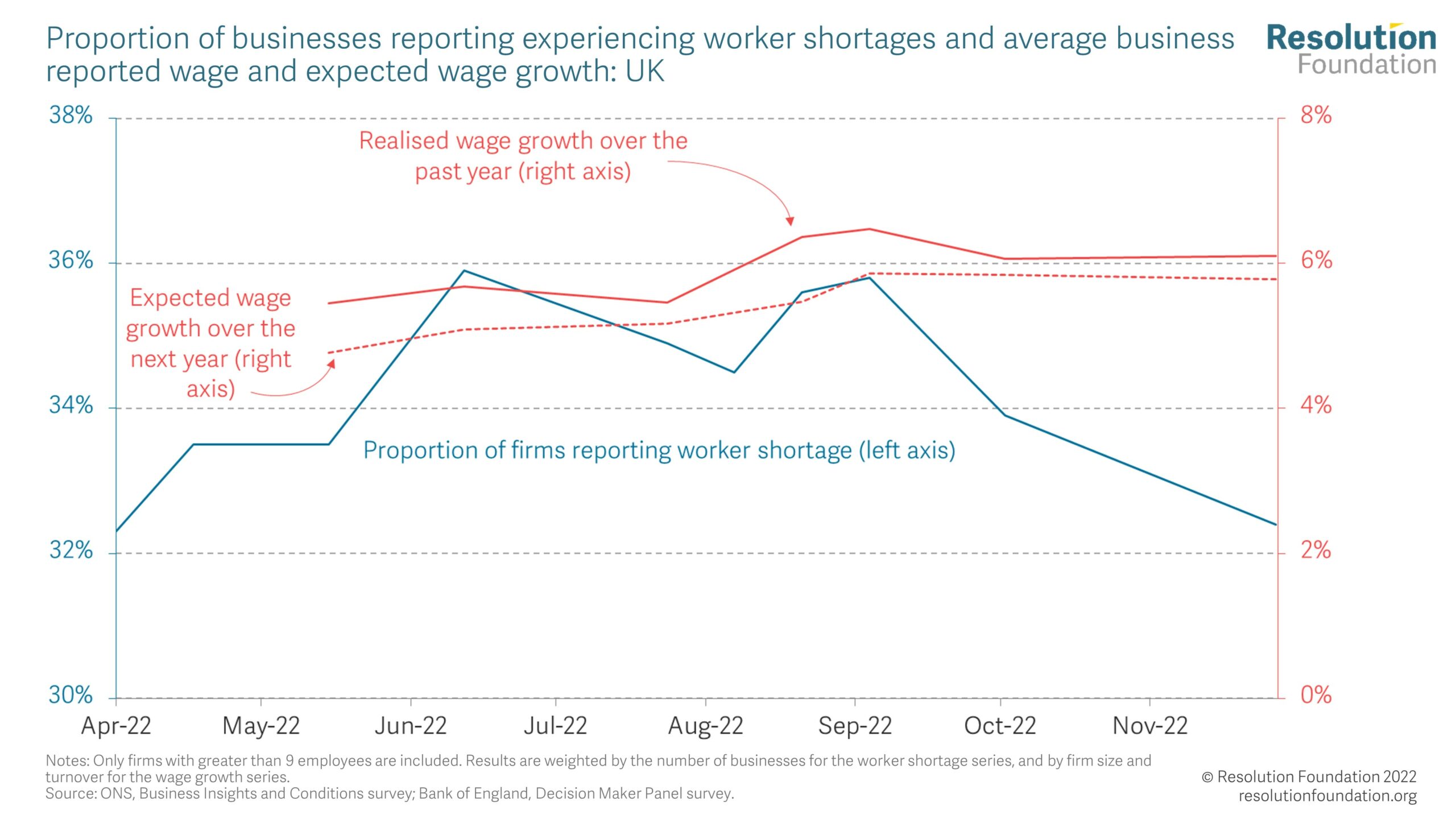