I can’t quite tell which bits of the Labour Party Jeremy Corbyn is and isn’t in these days, while the line appears to be that Priti Patel is a bully but not an intentional one (whatever that means).

At least this style of facing both ways on personnel decisions is in no way affecting actual policy – there’s not even a whiff of contradiction between telling the Telegraph you’re going to have the biggest increase in defence spending in 30 years, while encouraging the FT to splash on the “worst hit to public finances since second world war”.

This of course is what happens when a government has no idea how to reconcile their pre-Covid political strategy of ending austerity/levelling up with the post-Covid reality that achieving almost everything we care about just got harder. To be fair, doing so is a tall order. But ultimately politics is always about answering the questions the country is actually asking, rather than the ones you wish it was. So, at some point it’ll be make your mind up time.

For now, just make your mind up to have a good weekend and we’ll see you for next week’s Spending Review extravaganza.

After the tone. A LOT of books have been churned out in recent years confidently predicting robots would leave us with no work. We’ll never find out if they were right, since Covid got there first, job destruction wise. But these debates will return post-pandemic, so read recent research that dumps the futurology nonsense in favour of some proper economic history. A telephone operator (here’s some great pictures + research summary) was one of the most popular jobs for young women entering the labour market in the 1920s.  But by 1940, most phone networks used mechanical switching, leading to permanent drops of 50-80 per cent in such jobs. Was this bad news for workers? Not for future cohorts of young women who saw no effect and moved into fast-growing/similarly-paid roles like typists and secretaries. But those who were telephone operators at the time saw a real impact on their employment prospects and pay. The lesson? Averages hide winners and losers, and change is MUCH easier to deal with if you’ve got a booming labour market going on.

Job options. Whenever you’re bargaining over something it always helps to have other options. There’s a reason we keep saying “no deal is better than a bad deal” (though it misses the point that you need to actually have other options, rather than just say you’ve got them). In the world of jobs this is clearly true – your ability to deal with, for example, an (unintentionally) bullying boss is hugely stronger if you’ve got the option of walking out the door to another job. This matters for the labour market more broadly – we should worry if employees doing a particularly kind of job have little choice about which company to work for (giving the firm ‘monopsony’ power). A new study on the French labour market finds evidence that this is reality not just theory. The authors provide a very concrete example, arguing that a merger between the two biggest retail employers would mean €24m lost wages a year, and 8,0000 fewer hires. Far from peanuts.

Path dependency. There’s a bit of a row going on about wealth taxes. But how much does the distribution of wealth matter for people’s long-term outcomes? Shed loads is the answer from an interesting paper on the lasting impacts of very different systems of agricultural land inheritance across Germany. Comparing areas where the 19th Century norm was for one person to get everything vs those that allowed land to be shared out when passed on, the authors find that 1) these rules made a material – and lasting – difference to wealth inequality and 2) income and GDP levels are 6 to 14 percent higher today in areas that equally divied up land, because workers had stronger incentives to be entrepreneurs/choose occupations that took advantage of industrialisation. There’s a well-known shorter version of this argument: if you get too wealthy your kids will get lazy.

What goes up. Everyone loves talking social mobility – specifically they love talking about people being able to rise up if they are lucky enough to have the talent to do so. What don’t people love talking about is downward mobility – where some people do less well than their parents in a society with lots of social mobility. So well done on the Social Mobility Commission for publishing a paper on the unpopular bit of the mobility debate. There’s are lots of findings to chew over. Between a fifth (men) and a quarter (women) of us are downwardly mobile – but that figure is much higher for those not born in the UK, with lower qualifications, or for women with caring responsibilities. Those with degrees have a lot of protection against downward mobility. Overall an important reminder that if some go up, others come down.

Reading matter(s). For some of you TOTCs will never be enough. We need reems and reems more economics reading matter you shout. Well fine – head over to Diane Coyle’s Enlightened Economist blog for her shortlist for economics-related books of the year and start wading through it. Even if it’s not the answer to the gap in your life, it might provide some early Christmas present thoughts for your worthier family/friends

More (highly relevant to today) history lessons from this week’s chart, showing how state spending has been reshaped hugely since the war. Health and education spending as a share of the overall economy rose in 40 of the 72 years since 1948 – the cumulative effect of which is that health spending has risen a fairly staggering 6 per cent of GDP. Where has the cash come from? Not just higher taxes – defence spending has fallen in 48 of those years, with the overall decline almost exactly matching the 6 per cent of GDP health increase. So, the PM’s pledge to significantly increase defence spending over the coming three years is bucking a very long term trend. The Government is already committed to increases in health spending – and you’ll have noticed there’s a pandemic on so there’s probably more to come. The history lesson? If defence is going up, something else is coming down (spending wise) or going up (on the tax front). But no-one has any idea what. 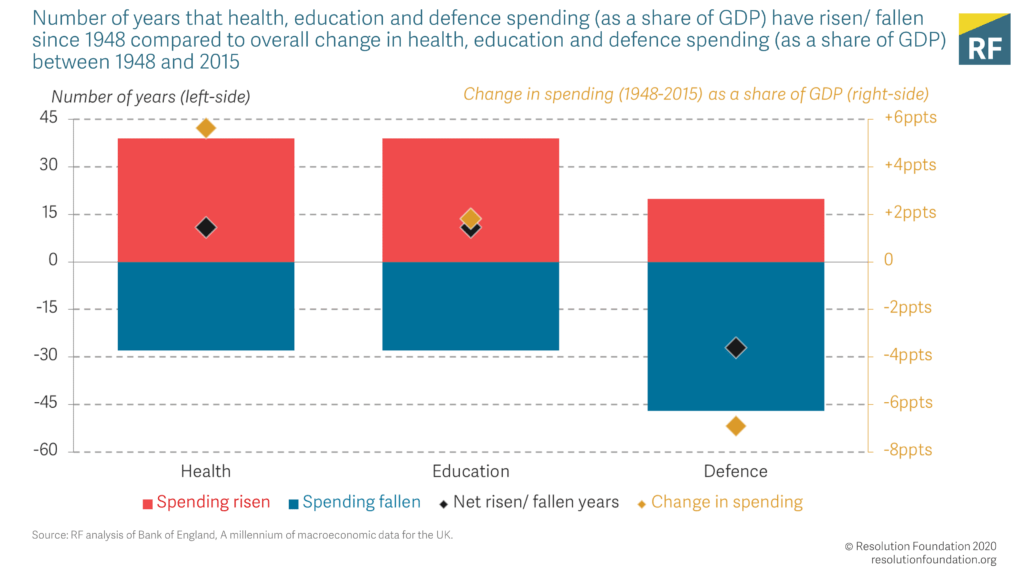