This weekend marks the end of several eras. Most importantly for the nation the school holidays, as the joys of combining work and the school run return. Selfishly I’m more focused on another era coming to a close – the one called ‘youth’ (my twin and I turn 40 on Sunday). The only plus side is this will improve the accuracy of the hatchet-job columns that get churned out occasionally – they’ve disgracefully been claiming I was 40+ for years (obviously all the other smears are entirely accurate).

Oh and it’s Boris Johnson’s last weekend in Downing Street. It’s not every day you get a new PM, even if it’s felt a bit like that since 2016 (it’s no coincidence that we last managed four PM’s this swiftly in the 70s). So, we’ve got a TOTCs special reflecting on what comes next – all of which comes with the big caveat that who knows given the ludicrously high economic and political uncertainty…

Honeymoons are the norm…

It’s fashionable to say that Liz Truss (who betting markets/pollsters/pundits say is certain to win) won’t get any kind of honeymoon from the public. I’m not sure that’s quite right for two reasons. First, literally everyone gets one. Our first chart shows Prime Ministerial satisfaction ratings before and after each premiership transition that has taken place mid-parliament in recent decades. Now maybe they were all doing a better job than their predecessor from day one. Or, more realistically, we voters just really like a change. 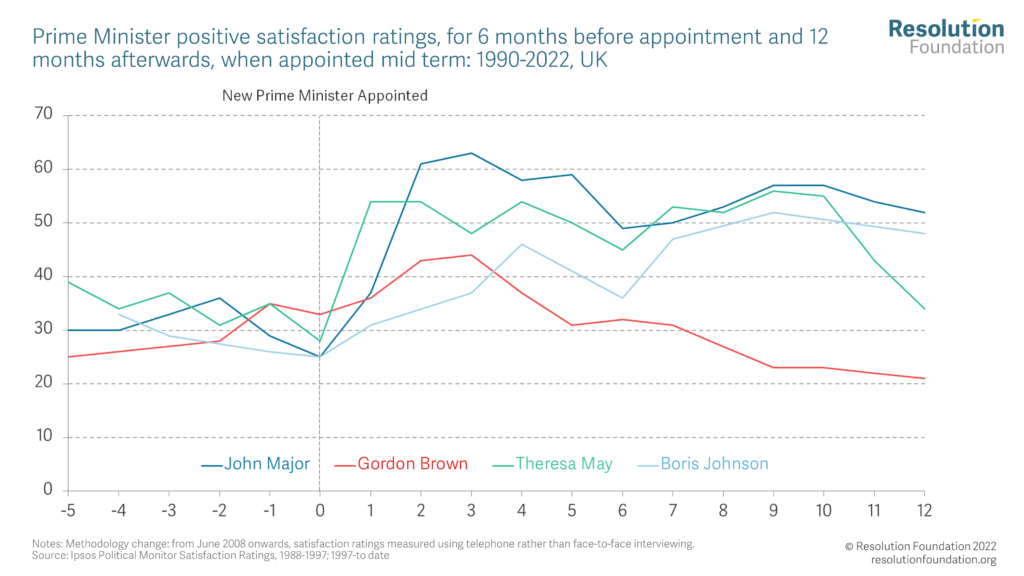 There’s clearly a lot of variation in how long the honeymoon lasts. John Major and Boris Johnson rode theirs to election victories. Gordon Brown’s was short lived – banks going bust and the mess of whether he would/wouldn’t call a snap election didn’t help. Theresa May’s lasted long enough to persuade her to call an early election – which gave the public enough visibility of her to bring the honeymoon to an end. But the public have largely given everyone new a brief benefit of the doubt.

The second reason to expect an initial Truss bounce is that expectations are low, specifically on energy bills action. There’s been times over the summer when being largely silent on the huge crisis facing the country, or leaning into not providing much support, has caused problems. But it will be actively helpful when it comes to the short-term reception of the emergency Budget coming in a fortnight’s time. Leading people to expect modest help for those on benefits and then tax cuts for the top, before actually turning up with a much bigger package that covers the middle class and businesses too, is what I’d have thought we’re heading for. Our next chart shows why: no-one with a political bone in their body (which Liz Truss certainly has, having become the PM against the odds) will look at these forecasts of the disaster coming this winter and conclude that they’ve not got much choice but to go very big indeed. Even a PM who hates handouts will be borrowing billions. 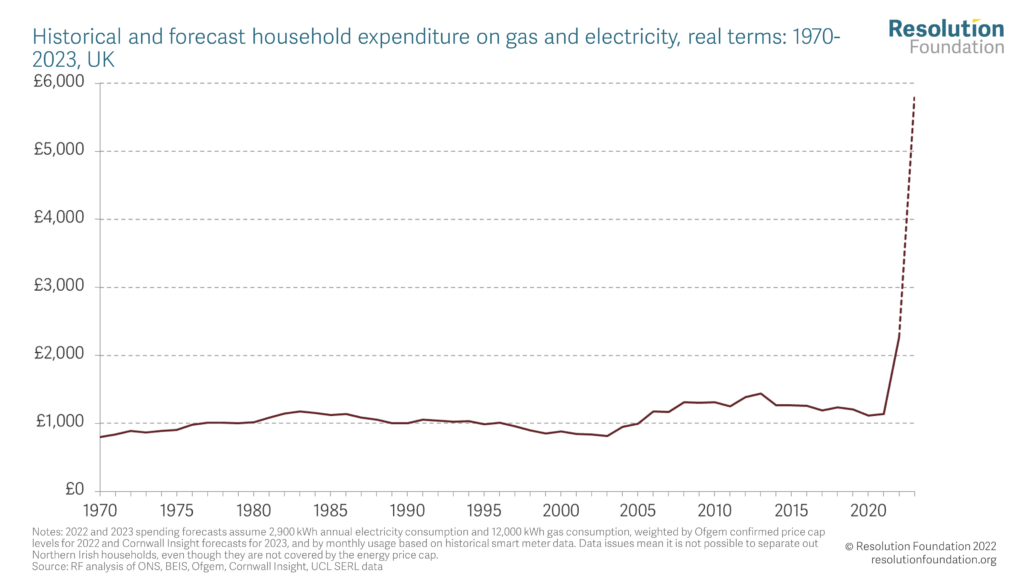 The new PM should plan on the honeymoon being short lived…

It’s easy to see Liz Truss exceeding early expectations to cement her initial position, but it’s hard to see the good times lasting. Being grateful for support announced ahead of pain arriving is perfectly consistent with being very annoyed when grim forecasts become grim reality: voters do not like getting poorer, and Britain is going to be doing exactly that for some time. While we’re focused on sheer scale of bill rises this winter, there is a big danger for the new PM if she thinks this as a short sharp shock to ride through in early 2023 before emerging into sunny uplands. The Bank of England’s current forecasts for stubbornly high inflation means real household disposable incomes falling, not just by 5 per cent this year, but by 6 per cent next year too. Combined that’s equivalent of close to £3,000 for the typical household, or twice the hit they faced from the financial crisis. The Bank of England is telling the country we also need to have unemployment rising for the next few years as the price of controlling inflation.

Yes the big package of additional support coming will soften this, but if it’s just temporary this year that will just push the pain in terms of changes in our living standards into the following year, as the next chart illustrates (the example of a £30bn package is enough to deal with this year’s losses). We can borrow our way around a temporary hit to our living standards, but not from one that is long lasting. 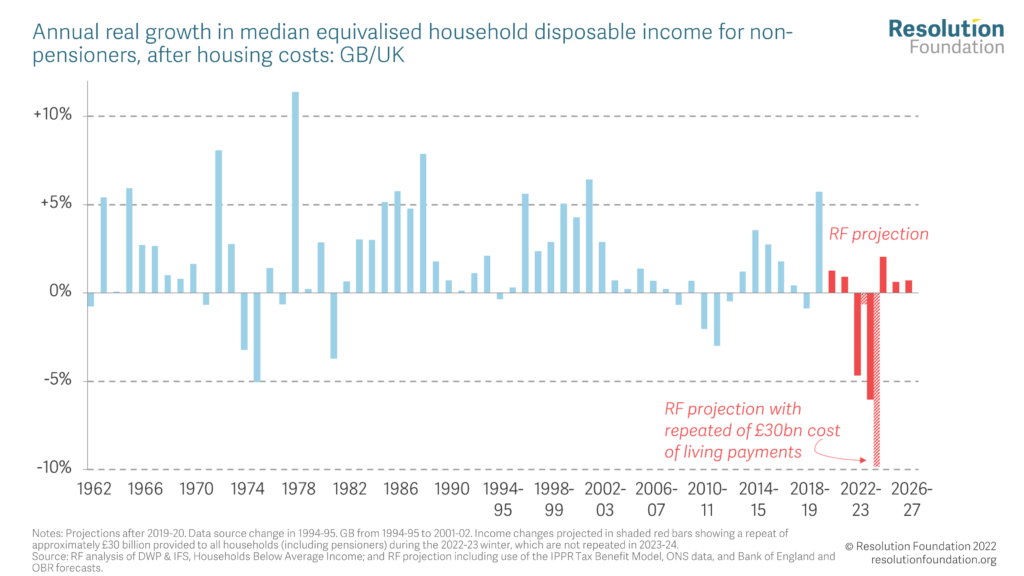 This is one aspect of a wider point central to how the economics and politics of Liz Truss’ time in office might evolve: levels, not just rates of change matter. The pain of high inflation doesn’t go away when inflation falls. Or, to put it another way, punters are likely to stay angry while prices remain very high, even if they stop rising.

No-one should pre-judge an election that is almost certainly two years away, but history shows that voters don’t reward parties overseeing tough economic times. One of the reasons it was an odd choice for Theresa May to call a snap election in 2017, as we noted at the time, is that PM’s generally don’t want an election when real wages are falling as voters punish them when such polls do take place. Real wage falls back then were tiny compared to today: on current forecasts high inflation will have wiped out all pay growth since 2003 by next year. Even if things work out much better than currently expected it’s hard for this Parliament not to break all records as the worst for living standards as our next chart shows. 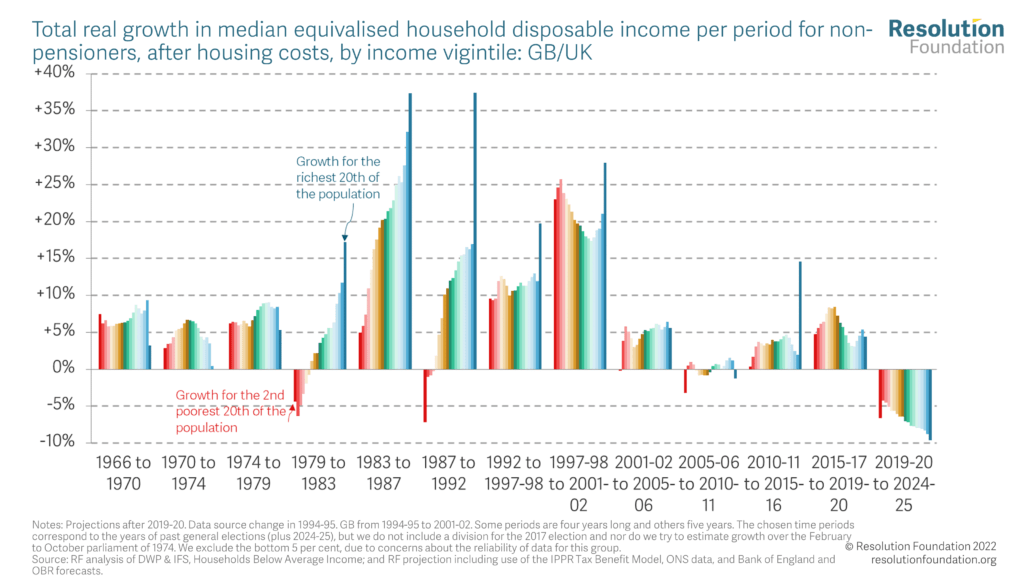 …and lots of this is out of her hands

Obviously lots can change. Major policy announcements are coming and economic forecasts, uncertain at the best of times, are all over the place at present. One thing matters more than almost anything else: energy prices. How high prices peak, and how long they remain well above levels we’re used to, will be the biggest driver of the future path of inflation, the depth of the now hard-to-avoid recession, and the political prospects for the new PM. I can imagine scenarios where prices remain high or fall fast. There is huge uncertainty about future supply, and we just don’t know how well Europe can cope with a winter through which Putin restricts supply. 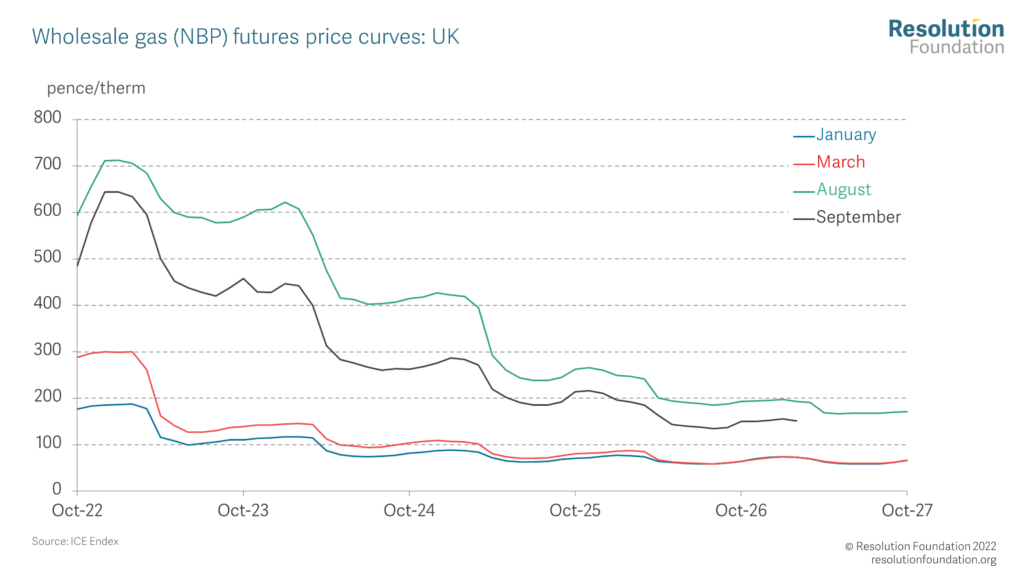 All Prime Ministers have to live with the reality that a large amount of their fate lies out of their hands. But few have had to wrestle with that fate being so closely tied up with the price of a single good, over which they have so little control. Liz Truss has probably felt like she had this leadership campaign under control for the last month or so. But in control is not likely to be the defining feature of what it feels like sitting in Downing Street in the months and years ahead.