Remember when people saying there were too many parties in Westminster were just moaning about Change UK? Oh for those happier, innocent times, when a socially awkward dinner in Nando’s was the problem rather than the total absence of social distancing in Downing Street.

The whole booze being ferried from the Strand in a suitcase madness does at least resolve something that’s been puzzling me through the pandemic: why there were so many people with wheelie bags in Whitehall even when the data said we basically London was tourist-free.

You’ve got a while to wait for Sue Gray’s report (which seems to have a more extensive marketing plan than a Bond movie), so keep yourself busy with this week’s reads our love of social norms but also the creativity boosting benefits of freedoms.

Pitch-side prejudice. Maybe this shouldn’t be surprising, but it’s properly depressing. Racist abuse is something many footballers face on an almost daily basis. That’s wrong/illegal/deeply unpleasant, but it also harms players’ performance is the conclusion of a recent paper. Examining the pandemic-induced absence of fans from stadiums in the Italian league, it finds that the performance of non-white players (measured across a range of statistics) improves by 1.5 per cent on average when fans are absent. This holds both at home and away games. While the research focuses on football, the wider point that racism affects people’s ability to do their jobs – and societies ability to make the best use of all our talents – is well made.

Normal children. There is early emerging evidence that our PM hates following rules or social conventions. Why is this a big political problem? Because it’s an inherent part of being human to create and support social norms. You can see that in public support for lockdown restrictions and it comes across loud and clear in a new paper examining the behaviour of children aged 5-8 across three continents. In all cultures children intervene frequently if a peer breaks the rules even if there’s variation in how they do it (children from small-scale communities prefer directly saying ‘don’t do X’, while others are focused on telling someone not to break a specific rule). So, loving a good rule is something inherent to us as humans, however much a handful of libertarian MPs wish it wasn’t so.

Nailing economics. I did not know this: in 1810 we spent about the same proportion of national income (0.4 percent) on nails as we now do on personal computers. That’s one of the nuggets from a new paper that apes Adam Smith’s famous focus on a pin factory in The Wealth of Nations by looking at 400 years of the price of nails. From the late 1700s to the mid 20th century the price of nails fell ten times faster than overall consumer goods, largely due to improved production processes. The bad news? Pesky nails have got more expensive since the 50s. For those that don’t think nail prices merit the time to read a whole article, our friends at Our World in Data are (as always) ahead of the game: check out their chart of nail prices through the ages.

Cultivating creativity. Everyone likes creative types – they’re quite fun and the whole innovation thing is rather important to economic growth. But what factors drive where clusters of creative people emerge? Research (free version) takes the long view with data on notable thinkers between the eleventh and nineteenth centuries, asking why more of them emerged in some places (Florence/Vienna/London etc) than others. It’s common to argue that bigger cities or cheaper prices attract creativity (see all the gushing over Berlin a decade back), but they find that economic conditions have no impact. In the second bit of good news for Liz Truss in a week, it turns out that what matters is freedom: most clusters were preceded by the establishment of basic economic and political liberty. Apparently it’s these big picture things that drive creativity. Disappointing for those of us that thought all we had to do was flock to the edgy parts of cities, sip yuppy coffees and look at avant-garde art on the weekend.

Not new. There is nothing remotely new under the sun confirms a BBC news report from two full decades back on a radical new idea: remote working (spotted courtesy of Rory Cellan-Jones). Apparently there were some benefits (less commuting), but also challenges (knowing your colleagues/managers worrying about productivity). Who knew.

Remember the heady days of late Summer 2021, when the big crisis facing Britain was apparently a huge structural change in our economy that meant firms would be permanently struggling to find workers and wages were going to soar? Oh happy days. Back in the real world the idea that a rapidly tightening labour market = some sort of crisis was always bonkers. But you’ll also have noted that headlines about worker shortages have disappeared (admittedly under some stiff competition now everyone’s busy apologising to the Queen). That’s because 1) a large chunk of this was always going to be temporary as we messily reopen an economy and 2) capitalism is quite well set up to adjust to shifts in demand. As Chart of the Week shows, vacancy levels have been falling. Claims that an HGV crisis would ruin Christmas were wide of the mark too – big pay rises did reflect shortages but appear to have peaked early in the Autumn. Similarly, above average pay rises in construction have seen vacancies fall back to pre-pandemic levels. Unfortunately, it took Omicron to suppress vacancies in hospitality. 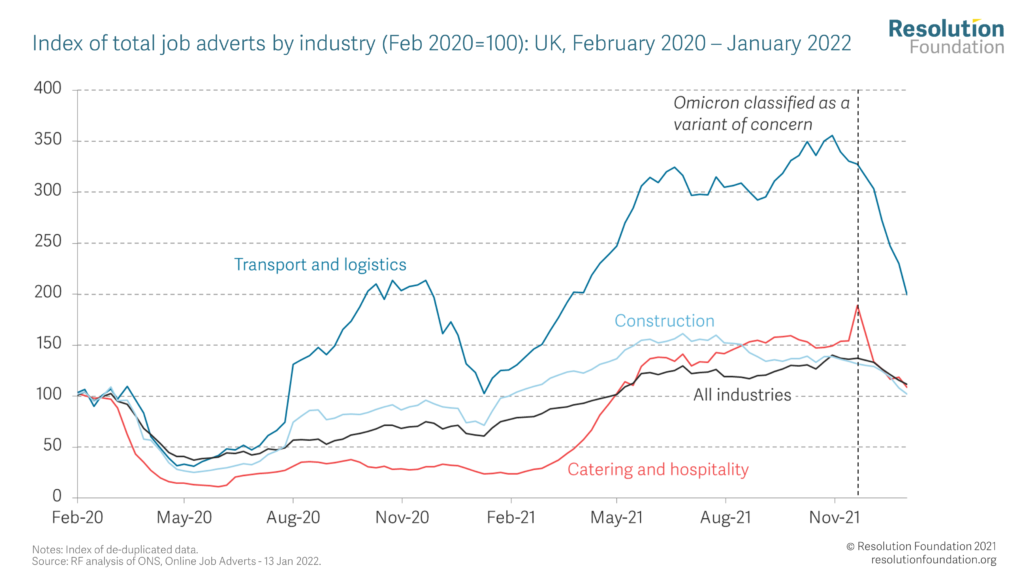